Returning to the Los Angeles area after 55 years in San Diego, the Chargers will play their home opener this Sunday at a temporary stadium where fans can see a billboard slamming the team and league’s lack of ‘loyalty.’

‘No Freaking Loyalty,’ reads the electronic billboard positioned near the Chargers’ temporary new home, with the first letter of each word in glowing red so as to spell out ‘NFL.’ Pictured to the left of the text is a picture NFL commissioner Roger Goodell.

The billboard is the brainchild of Chargers fan Joseph Macrae, who raised over $10,000 for the project with a GoFundMe campaign aimed at holding the NFL and team owners accountable for relocating franchises away from longtime supporters. It can be seen on the corner of Main Street and southbound Interstate 405, near the StubHub Center, according to Fox 5 San Diego. 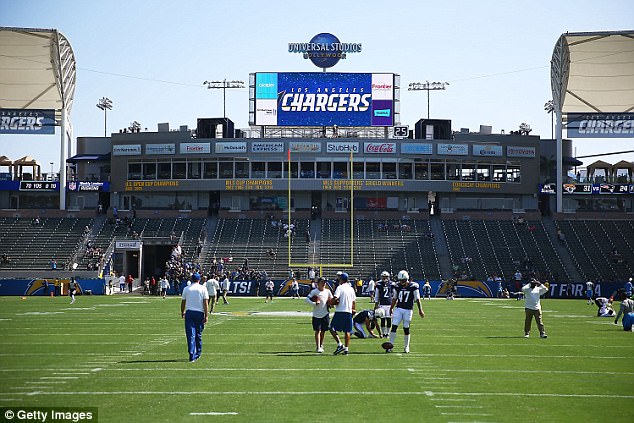 The StubHub Center in Carson City, California will need to last the Chargers until 2020, when they expect to move into a new stadium in Los Angeles

‘Have you been an NFL fan your whole life only to have your team suddenly taken away from your city?’ reads Macrae’s GoFundMe page. ‘You may have been the most loyal and dedicated supporter but it didn’t matter in the end. Have you ever wanted to tell the NFL how you actually feel? This is your chance.’

Macrae didn’t exclusively target Chargers supporters for donations. Disgruntled fans of the Oakland Raiders, who will move to Las Vegas next season, and the Rams, who returned to Los Angeles from St. Louis in 2016, were also invited to contribute to Macrae’s cause.

All three franchises decided to re-locate to new markets after failing to secure public funding for new stadiums. Oddly enough, the Rams left Los Angeles in 1995 when St. Louis offered the team a new domed stadium.

The Chargers will play at the StubHub Center in Carson City, California before moving into a new stadium in Los Angeles in 2020.

Macrae specifically took aim at Chargers owner Dean Spanos, who’s been criticized heavily since moving the franchise to Los Angeles after a 2016 bond measure failed to deliver funding for a new stadium in San Diego. 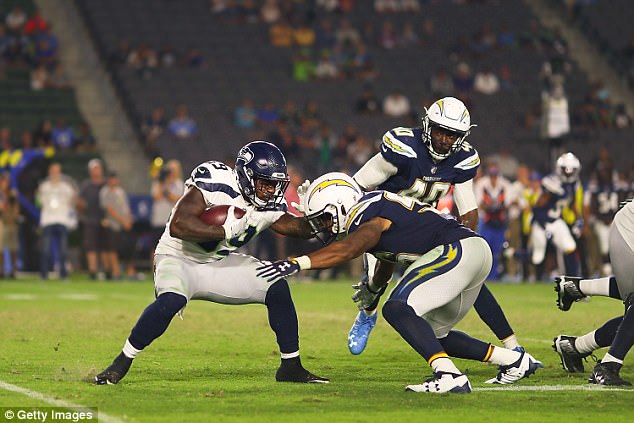 The StubHub Center seats less than 30,000 fans, which is considerably less than the Chargers’ previous stadium in San Diego, which had a capacity of over 70,000

‘My plan is to rent a few billboards in LA that will be anti-NFL and anti-Dean Spanos,’ Macrae explained on his GoFundMe page. ‘All of this just in time for the first ever ‘LA Chargers” home opener vs the Miami Dolphins on September 17th, 2017.’

The Chargers are about to embark on a three-game home stand and Macrae claimed there will be two additional billboards, which may continue to target Goodell.

‘I can’t get into too much detail about where and what the billboards will say,’ Macrae wrote. ‘[B]ut I definitely plan on putting “#Oakland and #STL” on the anti-NFL billboard for the fans in Oakland and St. Louis. Roger Goodell keeps talking about how ‘painful’ relocation is for the NFL. The NFL doesn’t care about us at all. Roger Goodell makes 34 million dollars a year and could care less about the people in San Diego, Oakland or St. Louis.’

Most of the donations have been around $5, but a half dozen have actually been over $200.

Macrae boasted on Twitter that he’ll have a ‘big surprise on game day.’ The Chargers host the Miami Dolphins on Sunday, which will be the first of three consecutive home games. 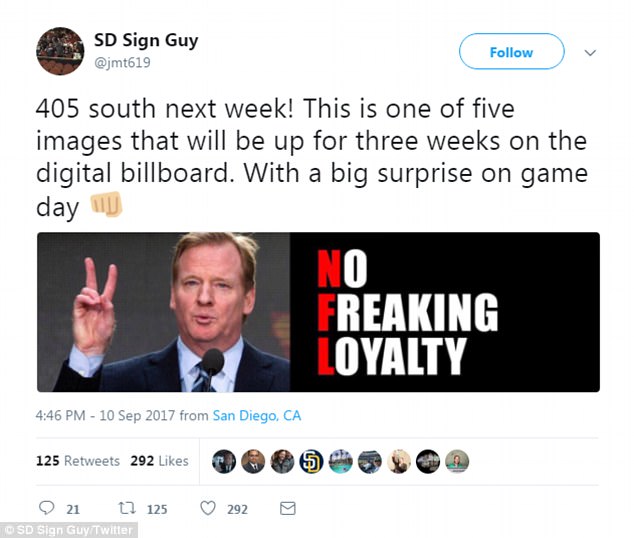 Chargers fan Joseph Macrae claims he has more billboards planned for Route 405, near the team’s new temporary stadium, with a ‘big surprise on game day’ still to come