‘Must have taken hours!’: Fans poke fun at Rio Ferdinand on social media after pundit posts his pre-match notes online ahead of England’s clash with Wales

Rio Ferdinand has been ridiculed for posting his pre-match notes on his Twitter feed ahead of England’s clash with Wales.

Ferdinand was on punditry duty for the BBC ahead of the vital Group B fixture, when he shared his notes from the studio just moments before going on air.

Working alongside presenter Gary Lineker and fellow pundits Ashley Williams, Alan Shearer and Ian Rush, the former England defender let fans into his pre-match thoughts ahead of the battle between the two British sides in Qatar. 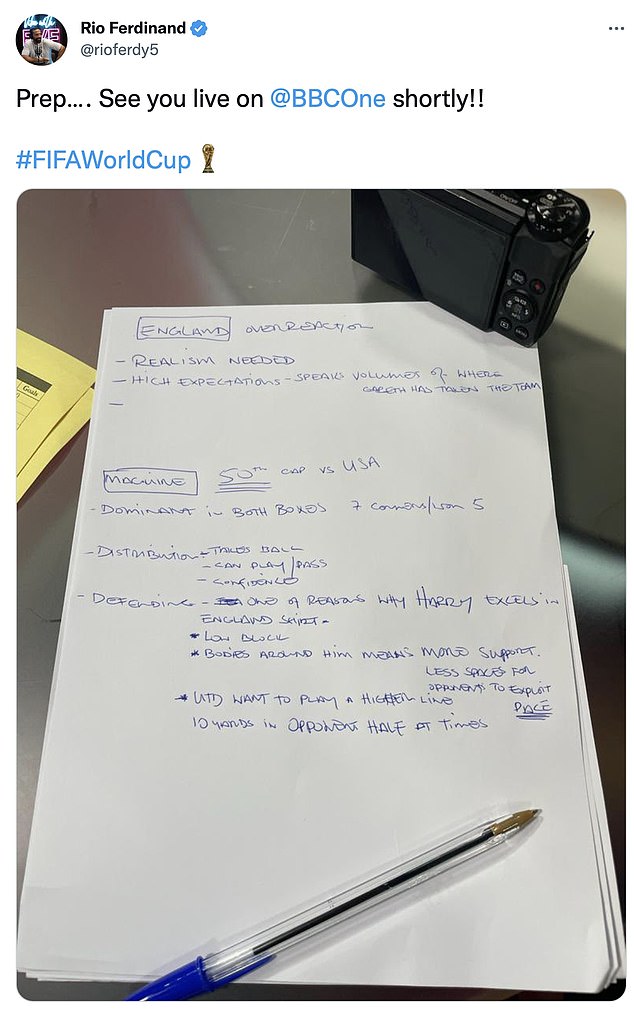 Amongst the scribbles shown on the piece of paper seem to be a focus on the overreaction to England’s goalless draw with the USA on Friday night, as well as some details on Harry Maguire could be used throughout the game.

However, the notes came to an abrupt end after those points, and fans have made fun of the 44-year-olds insight on social media.

One fan went straight to the point by calling Ferdinand’s notes ‘Some of the laziest ‘prep’ I’ve ever seen.’ While another cheekily took a dig the pundit by saying ‘Must have taken hours!’

Some fans compared his notes to their own vocations in life with one supporter stating ‘If I took notes like this I’d still be working in retail’. Another harked back to his schooldays and said that Rio’s notes were like ‘me in GCSE copying my mates notes.’

Perhaps most amusingly, one Twitter user was more worried about Ferdinand’s stationary than what he had written and quipped ‘Get a better Pen Rio, very disappointed in your BIC’.

England were looking for the point that would secure their passage through to the knockout stage, while Wales needed to beat the Three Lions or hope the result in the game between USA and Iran goes in their favour.