NFL fans were left stunned on Christmas Eve night when they tuned in to watch the tributes planned for the late Franco Harris, only for NFL Network to go to a commercial break midway through the ceremony.

Harris died at the age of 72 earlier this week – a cause of death has not been revealed. The initial plan had been for him to be at the ceremony on Saturday night as the Pittsburgh Steelers retired his No 32 jersey on the 50-year anniversary of his ‘Immaculate Reception’ – one of the most iconic catches in NFL history.

After his death, Saturday’s game and the ceremony itself took on an altogether more significant meaning – not that fans watching on television could feel the sincerity in the coverage.

‘WAAAITTTT…. no no no no no,’ wrote one fan. ‘Why is NFL Network cutting to break during the Franco Harris tribute in-stadium??’ 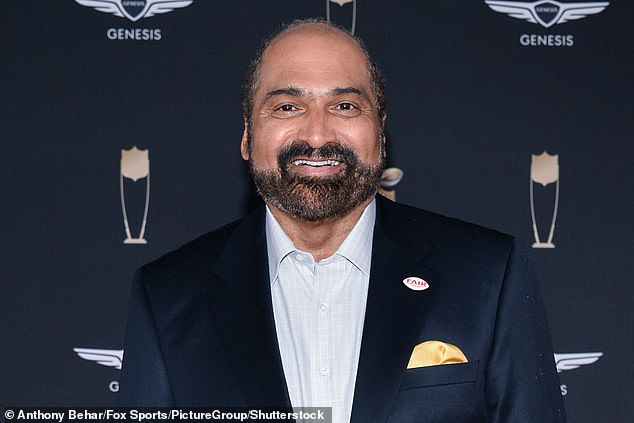 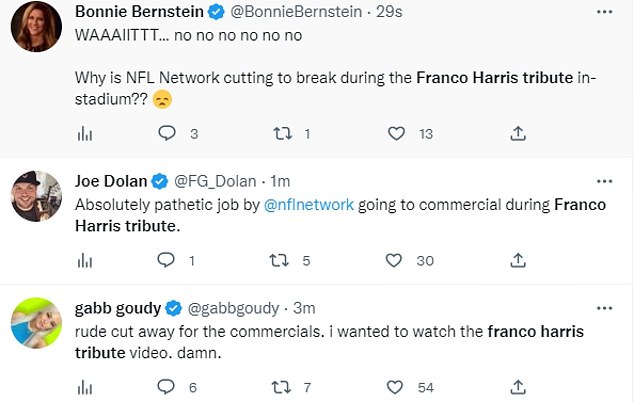 A different fan said: ‘Shame on you for not letting us see the Franco Harris video.

‘Cutting away to commercials was absolutely disrespectful to Franco and the Pittsburgh family. I am not a Pittsburgh fan, but truly wanted to see the tribute video. Where the hell is your holiday spirit?’

Most fans felt it was a distasteful move to show the commercials at such a sensitive time.

‘Shame on you NFL Netwotk for cutting to commercial as Steelers show Franco Harris tribute! Should have shown all fans the tribute! If you need more commercials find another time for them,’ said another angry fan.

‘Did you really just Not show the video tribute to Franco Harris and instead show us commercials nobody cares about? I guess Franco doesn’t make you money like commercials do. SMH’ another said. 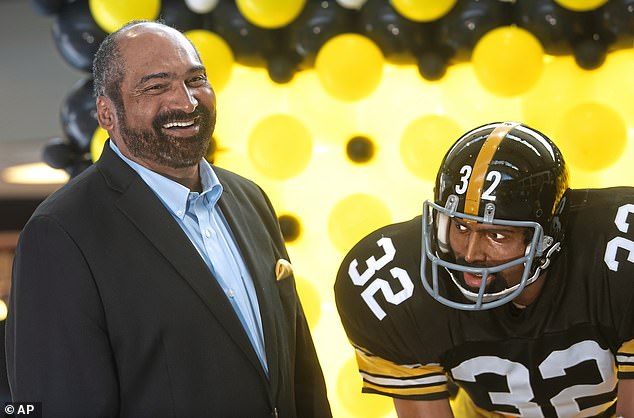 Former Pittsburgh Steelers running back Harris stands next a statute of himself on September 12, 2019, at Pittsburgh International Airport near Pittsburgh. Harris died on Wednesday morning, December 21, 2022, at age 72, just two days before the 50th anniversary of The Immaculate Reception

During the ceremony that fans watching from television didn’t get to see at halftime, Steelers president Art Rooney II officially retired his number and aired a tribute video featuring a number of Harris’s teammates.

‘The big man was supposed to be standing here right next to me,’ Rooney said during the ceremony. ‘But I want to thank Dana and Dok for being here tonight, for sharing Franco with us for the last 50 years.

‘It’s been said, ‘Life will bring you sorrow, but it’s up to us to bring the joy.’ Franco brought us joy for 50 years.

“So in recognition of his many contributions, both on and off the field, it’s my honor to declare No. 32 as officially retired.’

‘Franco was the heart and soul of our team. When Franco arrived, we became the Pittsburgh Steelers,’ Hall-of-Famer ‘Mean’ Joe Greene said in a tribute to Harris.

‘Everything went through Franco,’ Bradshaw added in that video presentation. ‘One handoff, I’m watching and I’m going “wow, this guy is special.”‘

‘He is the consummate team player. It wasn’t about how many yards he gained, all he cared about was winning,’ Hall-of-Famer Jack Ham said.

Harris’s wife Dana and son Dok were on the field for the ceremony, which was held at halftime in the game against the Las Vegas Raiders.

Earlier in the day, fans paid tribute to Harris on the 50th anniversary of the catch by laying flowers at the Immaculate Reception Memorial at the Acrisure Stadium. 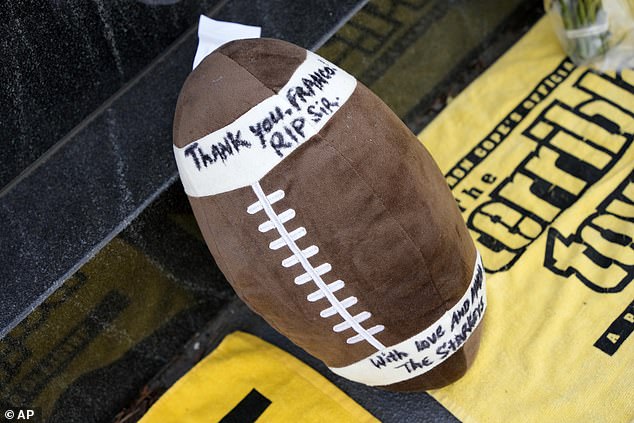 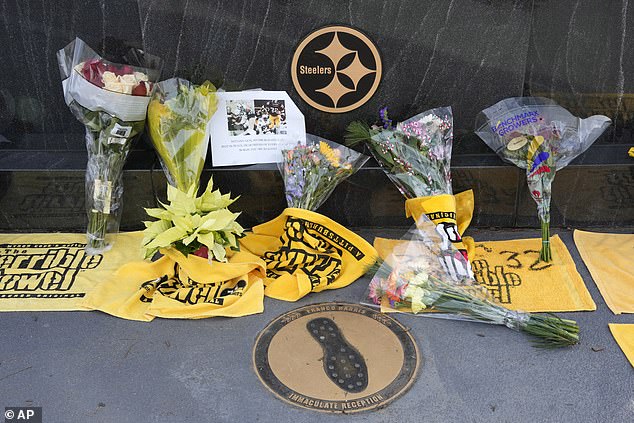 ‘It’s almost impossible to process that he could give so much to so many people personally.

‘People [have been] telling me stories about how they met him sometime in 1977 or 1987 or 1991. It was important to them, and it made a difference in their lives. And that’s really the beauty of my father, truly a very blessed soul who just really sought to help everybody out.’

Steelers players all wore jerseys with No 32 on in tribute to Harris when they warmed up before Saturday’s late game against the Raiders.