Fans have been setting off fireworks and have damaged a police car in the streets of north London amid raucous celebrations for Algeria qualifying for the African Cup of Nations final.

The game looked to be heading for extra time before Manchester City star Riyad Mahrez curled in an injury-time free-kick to send Algeria into the final to face Senegal.

But it appears things started to get out of hand as a police car has allegedly been vandalised after people were seen jumping up a down on the windscreen.

It comes after a mother was run over and killed in front of her children in France last week by an Algerian football fan celebrating the team’s previous victory.

In London last night, the hundreds of fans have managed to block off the road, as social media users commented on the ‘carnage’ taking place.

One said: ‘Blackstock Road is carnage right now after Algeria’s win the #AFCON.

And another said: ‘Blackstock Road about to be madness tonight.’

And some people have now started to complain on social media to the police about the noise.

A tweet from Transport for London (TfL) said: ‘BLACKSTOCK ROAD – ISLINGTON, N4 2DE. Road closed in both directions at the junction with Rock Street due to football celebrations.

‘Route 4 is diverted via Highbury Corner and Holloway Road.’

Algeria, who face Senegal in Friday’s final, dominated the first half and should have had more than a 1-0 lead to show for it, courtesy of a William Troost Ekong own goal. 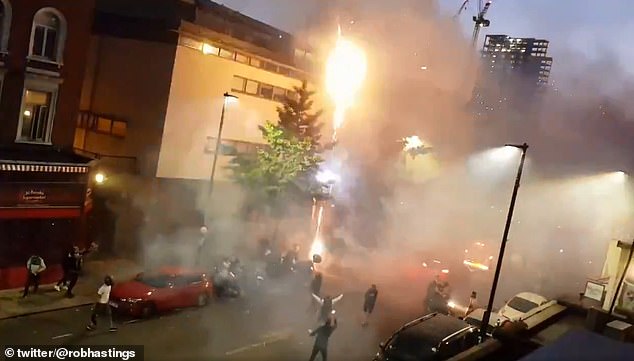 The hundreds of fans have managed to block off the road, as social media users commented on the ‘carnage’ taking place

Nigeria equalised out of the blue midway through the second half with a penalty for handball converted by Odion Ighalo, his fourth goal of the tournament, after a lengthy VAR review.

There were ugly scenes in the crowd as bottles were thrown after the equaliser.

‘It was a very, very tough game against a strong team,’ said Mahrez, who plays for English champions Manchester City.

‘We were 1-0 up, good in the game and this decision of the VAR, of the penalty. ..they scored and we have this free kick and we scored, so we are very, very happy because to be in the final of Afcon is unbelievable.’

A spokesman for the Metropolitan Police said: ‘Police were called at around 20:49hrs on Sunday, 14 July to Blackstock Road N4 following reports of a group of football fans beginning to gather in the street. Officers attended.

‘Some members of the group began setting off fireworks before the crowd grew as the football match concluded. Road closures were put in place.

‘There are no reports of any injuries to officers or members of the public.

‘A police vehicle has sustained damage to its windshield. There have been no arrests. Police remain at the scene.’

Last Thursday night in Paris, a night of wild celebrations turned to violence after Algeria defeated Ivory Coast 4-3 on penalties in Egypt to reach the semi finals of the competition.

Dozens were arrested while three motorcycle dealerships were looted around the Champs Elysee as police used teargas on supporters.

In the southern city of Montpellier, a woman was run over and killed while her one-year-old baby was seriously injured when a 21-year-old Algeria fan lost control of his car at high speed.

Another of the victim’s daughters, a 17-year-old, suffered an ankle injury. The driver was later arrested.