‘What a truly sad way to blow up your career’: Furious Manchester United fans slam ‘DISGRACEFUL’ Cristiano Ronaldo after his explosive interview with Piers Morgan… as they claim he has ‘tarnished his legacy’ at Manchester United

Football fans have slammed Cristiano Ronaldo after his explosive interview with Piers Morgan.

Ronaldo has hit the headlines over the past week after the release of his bombshell interview on TalkTV.

Within the controversial sit-down with Morgan, Ronaldo slammed the current state of the club, along with heavily criticising Manchester United manager Erik ten Hag, who he claimed he didn’t respect and former team-mates including Gary Neville and Wayne Rooney, while he also tore into the attitudes of the younger players at the club.

The fall-out at Old Trafford since the interview was released has been huge, with Sportsmail’s Chris Wheeler exclusively revealing on Monday that United are exploring ways of sacking Ronaldo after the first clips emerged of his explosive sit-down with Piers Morgan.

The club were waiting until Cristiano Ronaldo’s full interview has been aired before deciding on his future – but there is a feeling within the club that this situation is far more serious than his previous misdemeanours.

And similarly, fans were furious with Ronaldo’s antics after the interview.

One angry supporter said: ‘What a truly a sad way to completely blow up your career. Ronaldo’s own ego and arrogance has left him looking horrible, what does he gain from this because I can’t figure it out… #MUFC #Ronaldointerview.’ 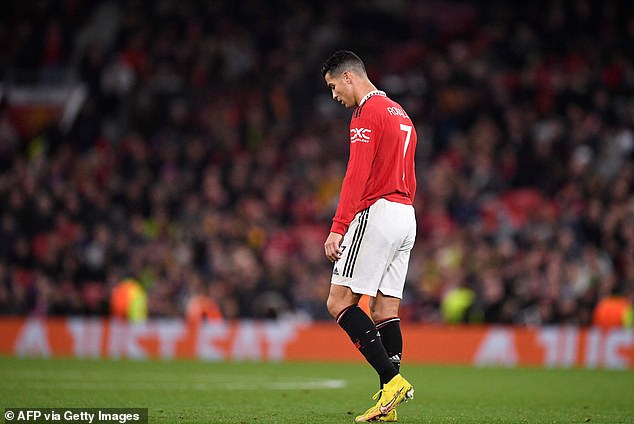 Another added: ‘Think Ronaldo has tarnished his legacy at OT now IMHO he should of had something in his contract allowing him to leave if Utd don’t qualify for Champions League to save all this think he’s a dead man walking at Utd no one’s bigger than the club in Ten Hag we trust.’

A further infuriated fan added: ‘A sad end. The club that made him & the fans who adored him more than any other, who welcomed him back with open arms. And because he can’t accept his career is in the final stages, he goes & ruins his legacy with that vile, disgusting, sack of s***. Cheers Ronnie.’

Another supported showed what he thought of the Portuguese star and bemoaned Manchester United’s mistakes in re-signing him last summer.

They said: ‘Nah! Ronaldo is a disgrace to this team. Shouldn’t have come back meh.’

Within the interview, Ronaldo also opened up on his highly-controversial decision to refuse to come on as a substitute against Spurs and then walk down the tunnel before the final whistle.

‘Piers I will be honest with you, it’s something that I regret to leave from the stadium,’ Ronaldo said.

‘Probably, or maybe no, I don’t know. It’s difficult to tell you 100 per cent but let’s say I regret, but in the same way I felt provoked by the coach.

‘Not allowed for me, a coach to put me in three minutes in a game. Sorry, I’m not that kind of player. I know what I can give to teams.

‘Okay, you don’t put me against Manchester City because of respect of your career and you want to put me three minutes against Tottenham. It doesn’t make sense…

‘I think he did it on purpose because, for example, in a national team the other clubs, if the coach wants to put me five minutes, if someone injured or if they really need me, I will help. But in that way I felt provoked not only because of that game, but before.’

And that was a major theme of fans ire, and supporters took the side of Ten Hag and felt as if he had come out of the interview looking good.

One said: ‘Erik ten Hag comes out of this with a lot more credit in his bank. Was never in doubt with his approach. In fact I understand him a bit more because of this interview and my support for him was never going to wane based off of anything Ronaldo was going to say.’

Another supporter slammed Ronaldo’s arrogance in the Spurs incident. They said: ‘I don’t think Ronaldo knew we were winning against Spurs. His problem is he didn’t give a damn what the score line was in either game. What he wanted was to be able to come on and score against City, the team that rejected him and prove he could do it against them.’

Later on in the interview, Ronaldo also admitted he would like Arsenal to win the Premier League this season – but only if Man United fail to join them in the title race.