Jane Austen fans were far from persuaded by Netflix’s trailer for its upcoming adaptation of Persuasion.

The streaming service released a two-minute-long trailer for the movie starring Dakota Johnson as the self-effacing heroine Anne Elliot, which is due to hit the screens on July 15.

In spite of being set in the 19th century, the dialogue in the movie adaptation uses modern phrases – such as referring to Anne’s former flame Captain Frederik Wentworth, played by Cosmo Jarvis, as an ‘ex,’ which has not landed well with purists of the period romance genre.

Some accused Netflix of turning Persuasion – which was published posthumously in 1817 after Austen’s death and is considered one of her most mature works – into the raunchy hit series Bridgerton.

Fans said the adaption would cause the 19th century writer to ‘turn in her grave,’ for its ‘awful’ dialogue as others asked if anybody involved with the movie had actually read Persuasion.

From the trailer, it seems that writers have gone for a mishmash of the formal language of the time with phrases such as ‘I’m not yet so much changed’ combined with more modern statements like: ‘We’re worse than exes. We’re friends.’

Jane Austen fans were far from persuaded by Netflix’s trailer for its upcoming adaptation of Persuasion, which will be released on the streaming service on July 15 and stars Dakota Johnson as Anne Elliot

Viewers were not impressed with the trailer, some going as far as saying the adaptation would cause Austen to ‘turn in her grave’

The Austen novel recounts how Anne Elliot is reunited with Wentworth after she was persuaded by her family to turn his marriage proposal down when they were younger and he was penniless.

In the book, Elliot is introduced as a quiet and reserved woman, who is often taken for granted by the members of her social circle and is self-effacing.

Fans of the novel were struck by the fact the character portrayed by Johnson in the Netflix adaptation seemed extroverted and sharp.

They said Netflix has turned Elliot into another version of the Pride and Prejudice heroine Elizbeth Bennet, rather than respect the nature of Persuasion’s main character. 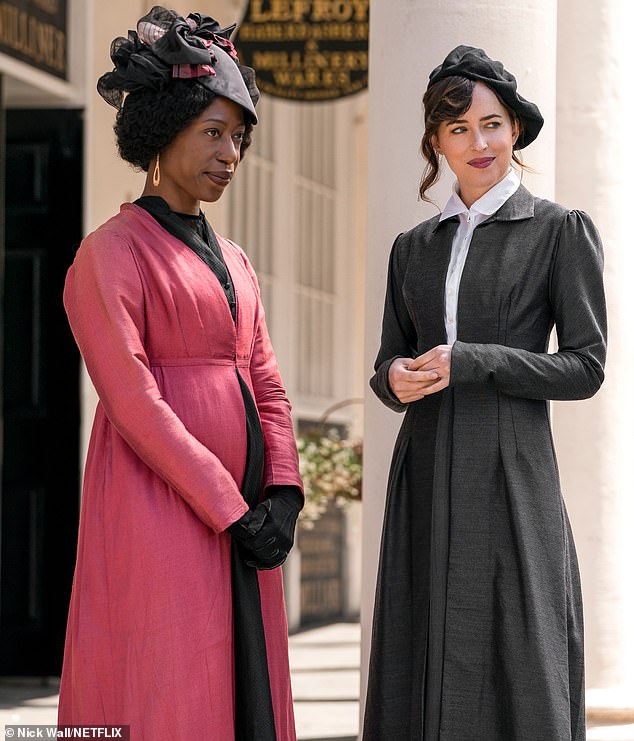 In the two-minute-long trailer, Anne’s friend Lady Russell, played by Nikki Amuka-Bird, left, tells a distraught Anne: ‘Darling, at some point, you have to move on’

The trailer for the Netflix movie sees Johnson as Elliot, lamenting that she and Captain Wentworth are ‘now worse than exes. We’re friends.’

She is also seen making fun of Wentworth behind his back, which fans said would be out of character for Elliot.

At another point in the trailer, Anne’s friend Lady Russell, played by Nikki Amuka-Bird, tells a distraught Anne: ‘Darling, at some point, you have to move on.’

Some raised concerns that by trying to modernise the dialogue, Netflix has altered the very nature of Persuasion. 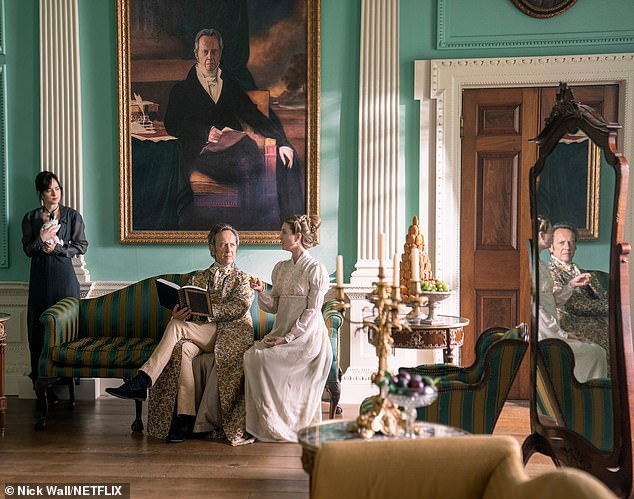 Fans raised concerns that Netflix tried to turn Persuasion, a quiet and melancholy novel, into Bridgerton 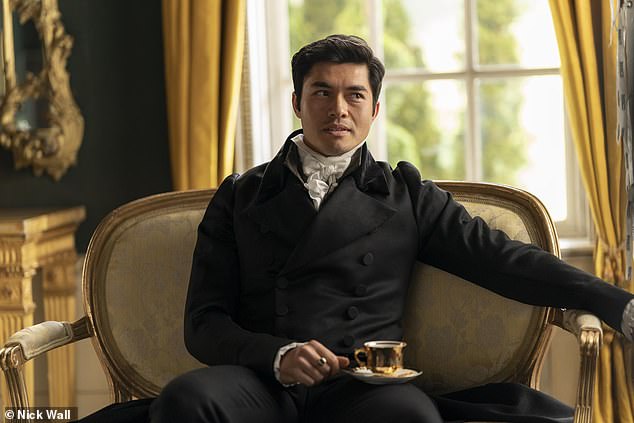 Henry Golding plays the dapper Mr Elliot in the new adaptation of the 1817 novel, which will hit the screens next month

The movie was also accused of copying Phoebe Waller-Bridge’s Fleabag by having Anne break the fourth wall repeatedly in the trailer.

TikTok user Elise Lamsdale compared the original dialogue with the dialogue heard in the trailer.

‘There could have been no two hearts so open, no tastes so similar, no feelings so in unison, no countenances so beloved,’ she read on her page.

‘Now they were as strangers; nay, worse than strangers, for they could never become acquainted, It was a perpetual estrangement,’ she said.

Viewers have panned the dialogue in the trailer for the new adaptation of Persuasion, calling it ‘awful’ and ‘flat’ 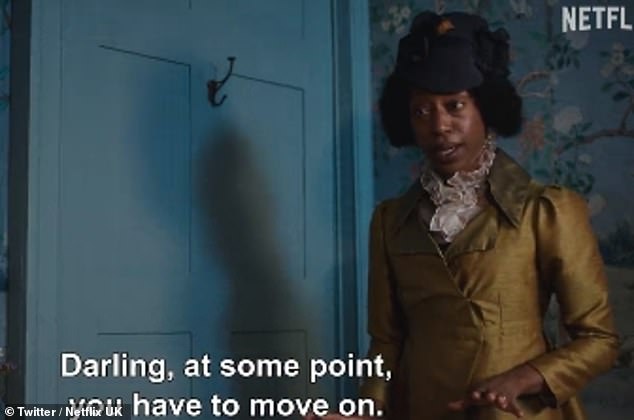 She then turned to the ‘exes’ line in the trailer to show how flat it felt compared to the original.

Fans aired their frustration on social media following the release of the trailer.

‘Utterly unpersuaded. Austen turns in her grave,’ one said.

‘Can’t believe this is an actual line of dialogue,’ another said, referring to the fact Johnson called Wentworth ‘an ex’ in the trailer.

‘Awful and flat compared to the original dialogue,’ one wrote. 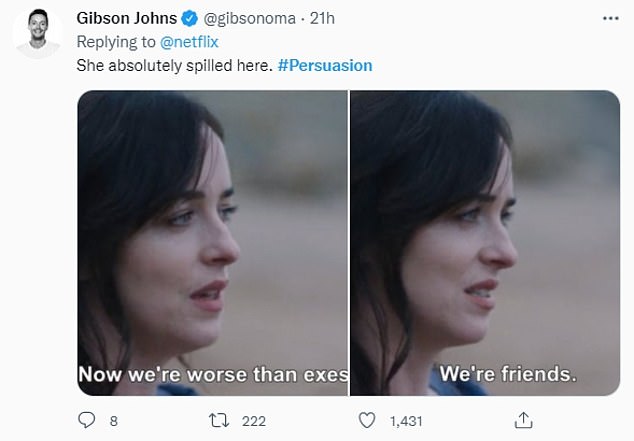 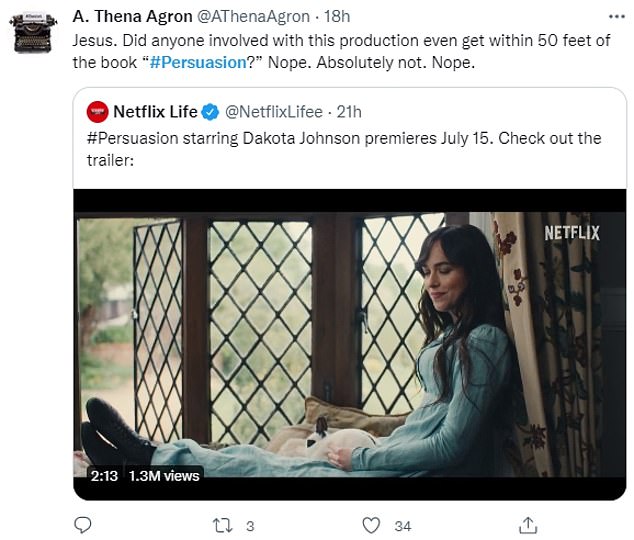 Austen enthusiasts were not ‘persuaded’ by the trailer, and said the ‘awful’ anachronical dialogue would cause the author to ‘turn in her grave’

‘Jesus. Did anyone involved with this production even get within 50 feet of the book Persuasion? Nope. Absolutely not. Nope,’ one said.

‘Hey, Netflix! Anne Elliot is NOT a flirty, chatty extrovert. “Modernisation” doesn’t automatically mean you have to change the heroine’s personality. And the “exes” is rather unforgiveable. Stop this Bridgertonisation of perfection, thank you,’ another said.

‘Not to be a pedant but I’m pretty sure no one in 1813 or whenever used the expression “exes”,’ one said.

‘I’m generally good with chances in adaptations, I’ll even take the jarring “exes” wording thrown in, but at the very least, the tone & mood should match that of the original. Persuasion is all longing & a bit melancholy & Anne’s quiet strength & I’m seeing none of it in this trailer,’ one pointed out.

Commenting on TikTok, one fan simply said ‘the Fleabag-ification of Persuasion,’ referring to the several fourth wall breaks. 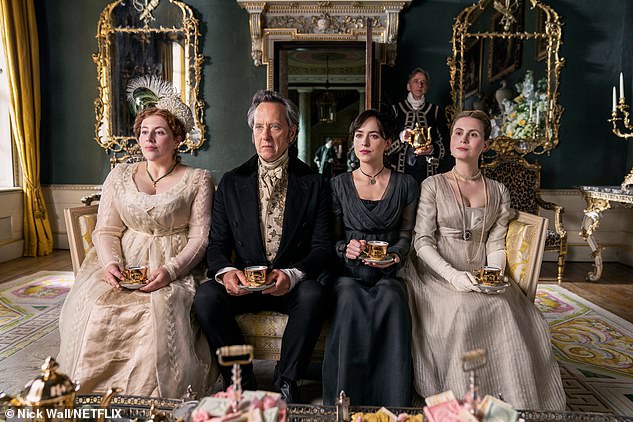 Richard E. Grant plays Anne’s narcissistic father in the movie. Some have said Netflix changed the nature of the Anne character to make her more like the Pride and Prejudice heroine Elizabeth Bennet 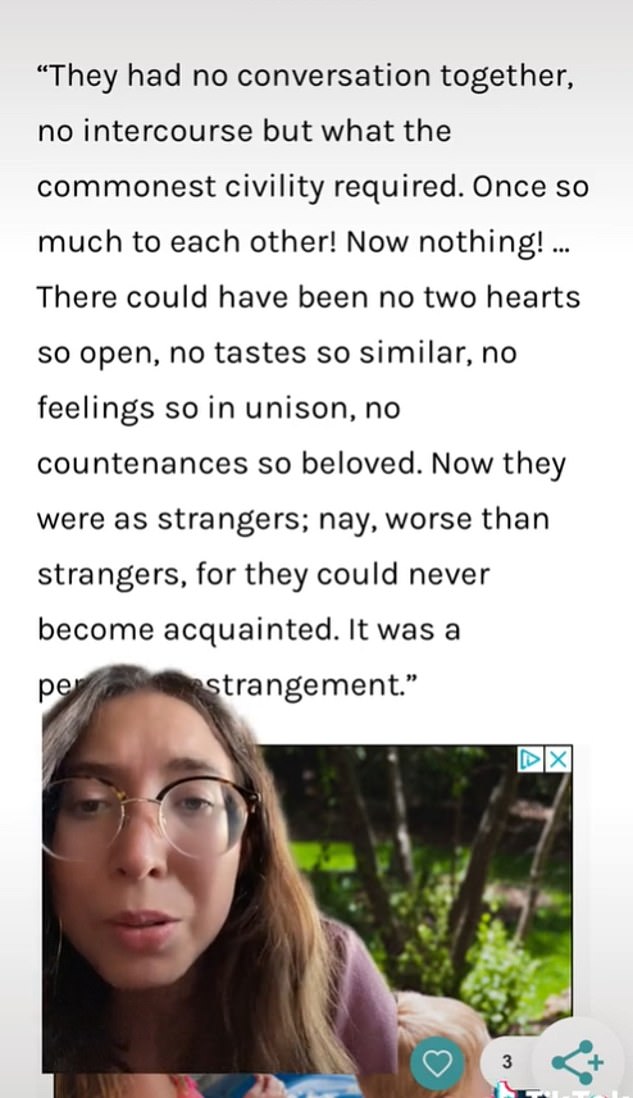 TikTok user Elise Lamsdale pointed out how beautiful the original dialogue is in Persuasion, and compared it to the trailer