‘The greatest win in Australian football history’: Fans take to social media to hail Australia after they upset the odds to beat Denmark and qualify for the last sixteen of the World Cup

Football fans have hailed Australia as they pulled off one of the biggest surprises at the World Cup so far, by progressing to the last sixteen ahead of Denmark.

The Danes, who were only beaten once in qualifying and defeated France in their Nations League Group, were heavily fancied to one of the two teams that would qualify from Group D, but have been upset by the Socceroos.

Kasper Hjulmand’s side went into the final group games with their fate in their own hands, but succumb to a Matthew Leckie winner for Australia to see them crash out of the tournament without a win to their name. 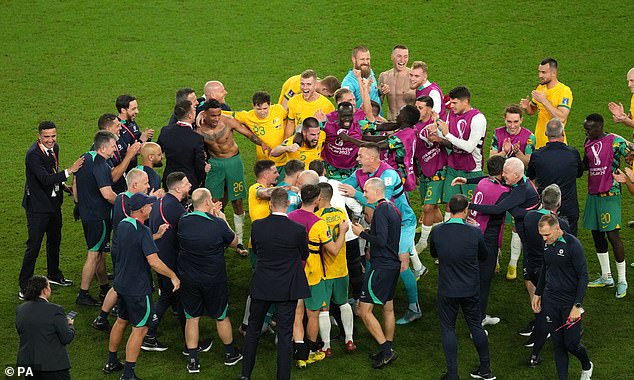 Australia beat both Denmark and Tunisia in the group, and will now face the winners of Group C in the knockout stage – which could possibly mean a meeting with Argentina and Lionel Messi.

Fans took to social media to hail the Australian side with one account simply stating ‘AUSTRALIA IS MASSIVE’, while another was slightly more subdued in his congratulations, saying ‘Advance Australia, fair’.

One posted a fair summery of Australia’s World Cup so far by saying what a lot of fans most likely thought, stating ‘I did not think Australia had a chance of going through but here they are.’

Another user got very carried away with the victory and you could hear his pleasure as he tweeted ‘LLLLEEETTTSSSS GGGGGGOOOOO!!!!’. While another happy supporter said ‘Win tonight is the greatest win in Australian football history.’

It has been a World Cup full of underdog stories, thanks to Saudi Arabia’s win over Argentina and Japan upsetting Germany, but Australia’s win may top the lot.

One tweet summed up the story of the group by saying ‘Australia been underdogs since World Cup qualifying round, they’re now in R16. What a story. And what an abysmal tournament for Denmark, throughly disappointed.

It wasn’t just fans too, former Aussie star and Leeds hero Harry Kewell also tweeted his delight in seeing his national side’s triumphant win. He said: ‘Over the moon! What an achievement Socceroos!!’

Australia have now matched their best-ever showing at a World Cup, they reached the last sixteen in 2006, where they were knocked out by eventual winners Italy. 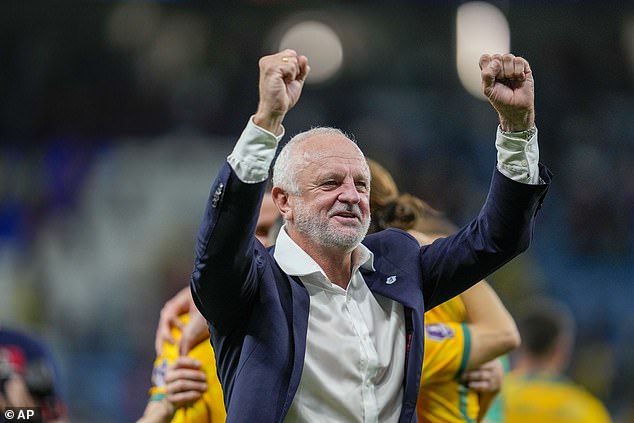