Social media users are claiming that The Simpsons predicted the rise of teenage environmental activist Greta Thunberg, pointing out that she bares a striking similarity to Lisa Simpson.

On Monday, 16-year-old Greta delivered an impassioned speech to world leaders at the UN Climate Action Summit, in which she lectured about the need for major policy change to save the environment and shamed those leaders for not doing more.

Fans of The Simpsons have since been quick to point out the eternally eight-years-old Lisa Simpson has been delivering similar speeches and calling for the same change over the course of the animated show’s 30 years on air.

In the news: Greta Thunberg, 16, has been making headlines for her climate change protests, and addressed the Climate Action Summit at the United Nations on September 23 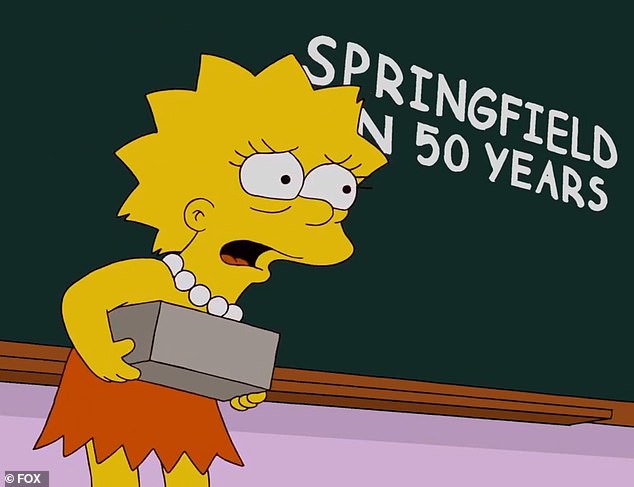 Animated advocate: Meanwhile, Lisa Simpson has been speaking out for the environment for several decades on The Simpsons 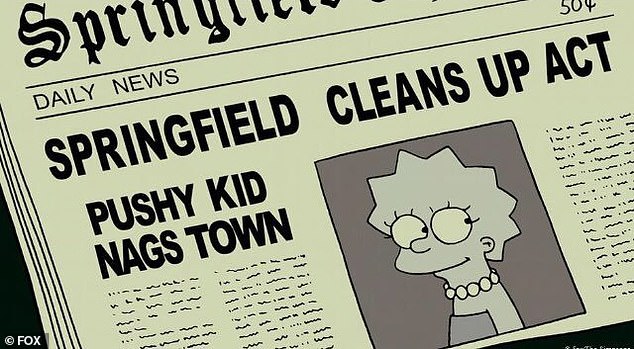 Twinning: Fans are saying The Simpsons predicted Greta’s existence, and that Greta is a real-life Lisa

Greta has organized several protest for action on climate change, and addressed the 2018 United Nations Climate Change Conference before her speech at the organization’s Climate Action Summit this week.

‘People are suffering. People are dying. Entire ecosystems are collapsing. We are in the beginning of a mass extinction, and all you can talk about is money and fairy tales of eternal economic growth. How dare you!’ she said at the summit.

‘For more than 30 years, the science has been crystal clear. How dare you continue to look away and come here saying that you’re doing enough, when the politics and solutions needed are still nowhere in sight,’ she went on.

As LadBible points out, Greta’s speech seems to echo one that Lisa delivered to classmates in a 2009 episode of the show.

In the scene, she and her classmates are imagining what their town of Springfield will look like in 2050 when Lisa sounds off, lecturing that Springfield won’t even exist in 2050 due to climate change. 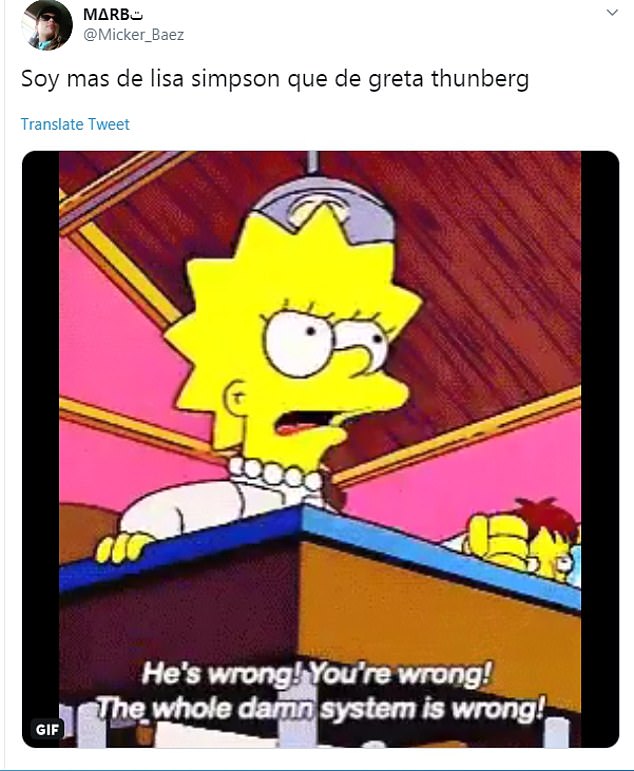 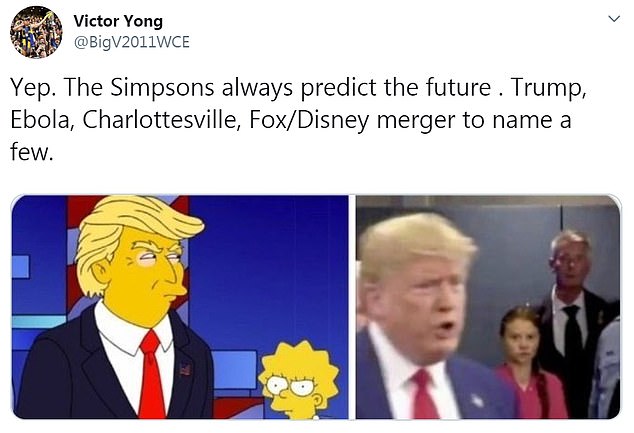 Life imitating art! Fans of the show are pointing out the similarities on social media

‘With global warming trapping the CO2 inside our poisonous atmosphere, our super heated oceans will rise, drowning our lowlands, leaving what’s left of humanity baking in deserts that once fed the world,’ she angrily tells her stunned classmates.

It was hardly the first time that Lisa shared her passion for the environment. She’s been a vegetarian for the course of the series, and has also advocated for recycling, conserving natural resources, and supporting other environmental initiatives.

She’s also lectured politicians before. Back in the 1991 episode ‘Mr. Lisa Goes to Washington’, she gives a speech about corruption in Congress.

And fans can’t help but be struck by how much Greta seems to be taking a page from the Lisa Simpson playbook.

‘Greta Thunberg is a real life Lisa Simpson and I respect that,’ tweeted one. 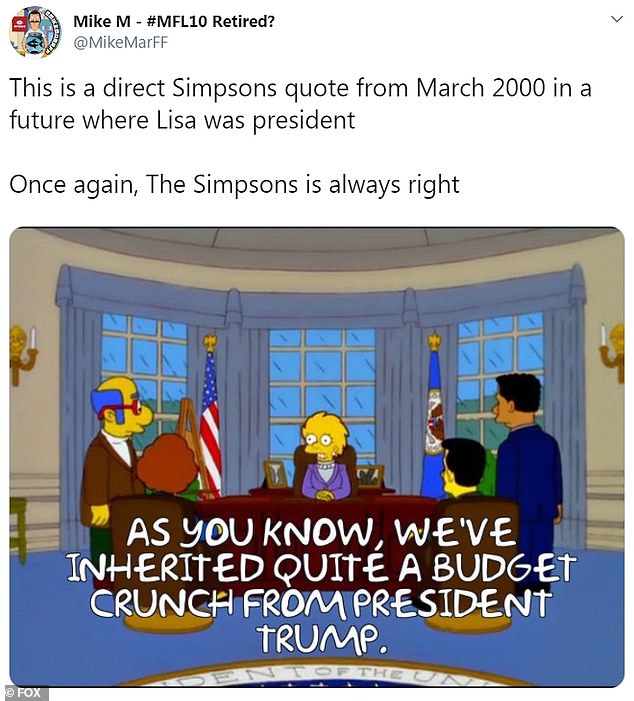 Spot-on! The show has a history of ‘predictions’ that come true —and predicted a Donald Trump presidency in a 2000 episode 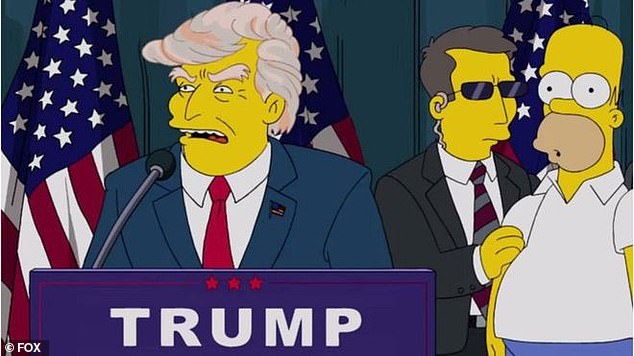 Uncanny: In the episode, Lisa is president and refers to her predecessor, Trump — who has turned up as president in the show since the 2016 election

In addition to dozens of Simpsons fans tweeting about it, thousands are supporting the idea on Reddit.

The Simpsons has been credited with predicting countless world events, including Donald Trump’s presidency.

In a 2000 episode called ‘Bart to the Future,’ the show looks forward to a future in which Lisa is President of the United states.

In a cabinet meeting, she says: ‘We inherited quite the budget crunch from President Trump.’

When Trump was elected 16 years later, writer Dan Greaney told the Hollywood Reporter: ‘It was a warning to America. That just seemed like the logical last stop before hitting bottom. It was pitched because it was consistent with the vision of America going insane.’

And creator Matt Groening told The Guardian: ‘We predicted that he would be president back in 2000 — but [Trump] was of course the most absurd placeholder joke name that we could think of at the time, and that’s still true. It’s beyond satire.’ 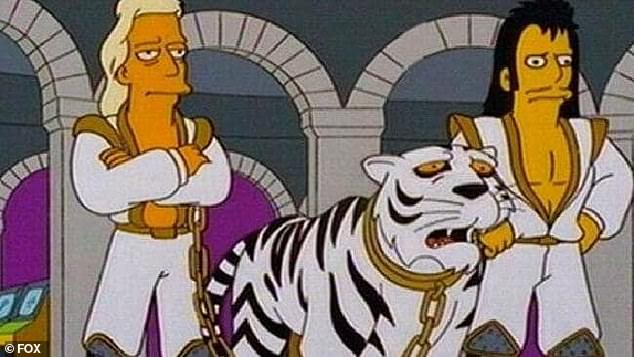 Spooky: Earlier, the 1993 episode ‘$pringfield’ predicted the moment Roy Horn of the Las Vegas duo Siegfried and Roy was mauled by one of the performing tigers 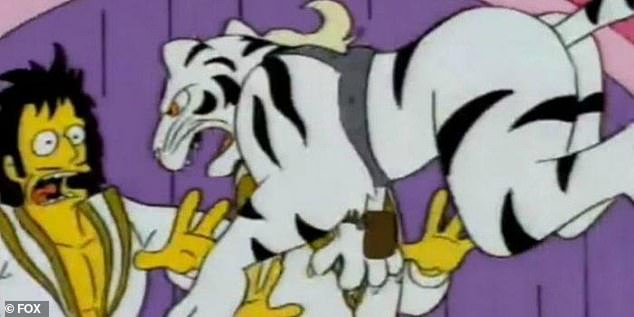 Looking to the future: German magicians named Gunter and Ernst are in the middle of a routine when one of their tigers attack. In 2003, Roy was attacked on stage

Earlier, the 1993 episode ‘$pringfield’ predicted the moment Roy Horn of the Las Vegas duo Siegfried and Roy was mauled by one of the performing tigers.

In the episode, German magicians named Gunter and Ernst perform at a casino and are in the middle of a routine when one of their tigers attack them.

Ten years later in 2003, the real-life Roy was attacked on stage by a white Bengal tiger. The mauling, which nearly killed him, was big news and ended the pair’s show. 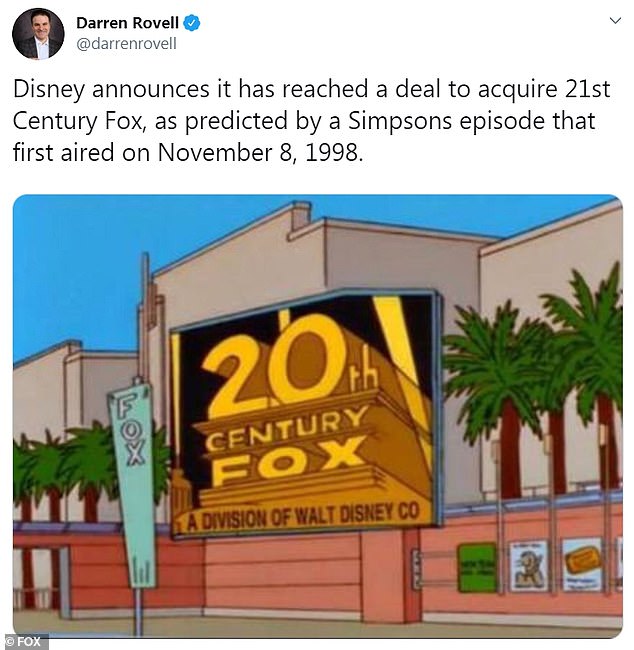 Seeing what’s ahead: In 2017, Disney announced a deal that it had acquired 21st Century Fox — and the Simpsons had joked about the acquisition back in a 1998 episode 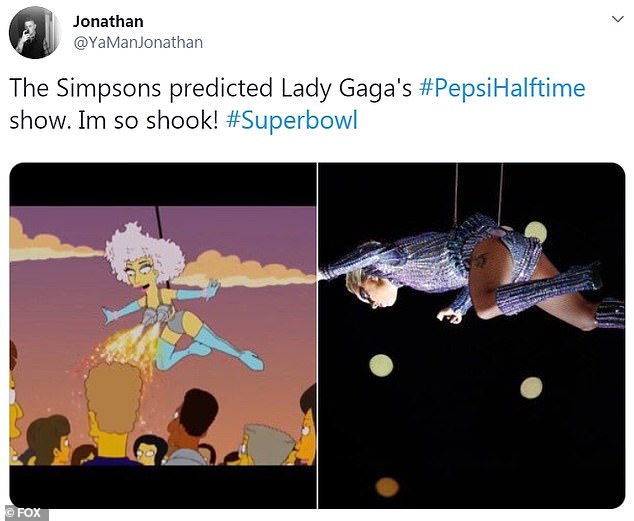 Ra ra ooh la la! In a 2012 episode, a Gaga lookalike performs in Springfield, suspended in the air in a bodysuit and tall boots — much like the real Lady Gaga at the 2017 Super Bowl

In 2017, Disney announced a deal that it had acquired 21st Century Fox, a $71.3 billion merger that was completed earlier this year.

Funnily enough, the Simpsons had joked about the acquisition back in a 1998 episode. Homer is at the studio for what was then 20th Century Fox when he sees a sign for the company, which reads at the bottom: ‘A Division of Walt Disney Co.’

Another prediction that came through in 2017 was Lady Gaga’s Super Bowl half time show.

In a 2012 episode, a Gaga lookalike performs in Springfield, suspended in the air in a bodysuit and tall boots.

Five years later, the real Gaga was suspended above the NRG Stadium in Houston, Texas wearing a very similar outfit. 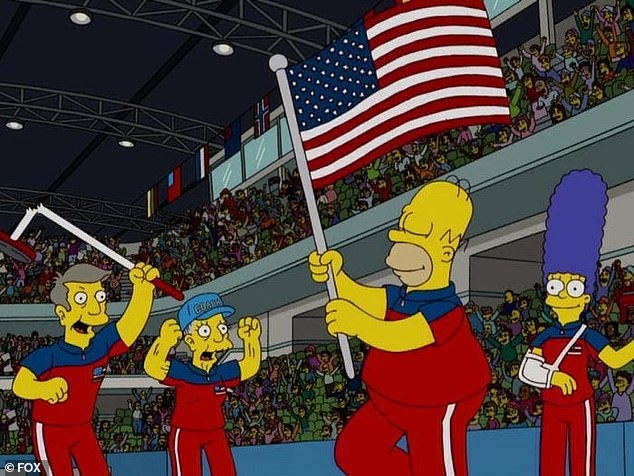 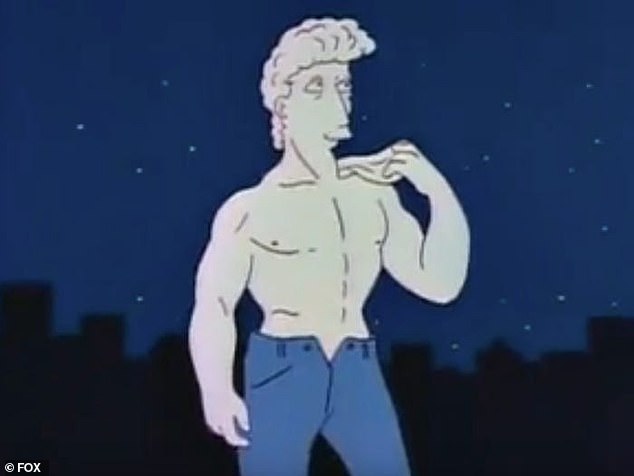 Yikes! A 1990 episode has Springfield residents calling out Michelangelo’s statue of David for being obscene. Russian protesters actually did this in 2016

Then there was the 2010 episode Boy Meets Curl, which managed to predict pretty closely that Team USA’s men’s curling team would beat Sweden at the Olympics.

In the episode, Marge and Homer compete on the US’s mixed doubles curling team at Olympics held in Vancouver, miraculously winning.

In 2018, the US men’s curling team did in fact beat Sweden at the Winter Games in PyeongChang.

In an eye-roller of a prediction, the 1990 episode Itchy and Scratchy and Marge has Springfield residents calling out Michelangelo’s statue of David for being obscene in its nudity.

As Business Insider points out, Russian protesters had the same issue with the statue in July of 2016 when a copy was erected in St. Petersburg.

Also hailing back to the early ’90s, a 1991 episode showed Ringo Starr of The Beatles replying to decades-old fan mail.

Over 20 years later in September 2013, two British Beatles fans received a letter from Paul McCartney in response to one they sent 50 years before. 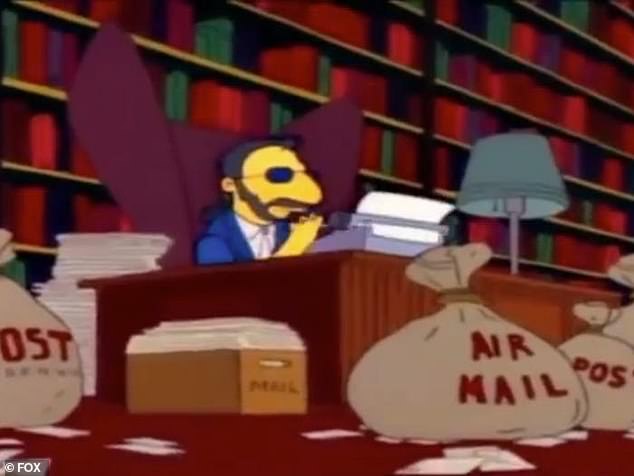 Crazy! In a 1991 episode, Ringo Starr replied to decades-old fan mail. In 2013, two Beatles fans received a letter from Paul McCartney in response to one they sent 50 years before 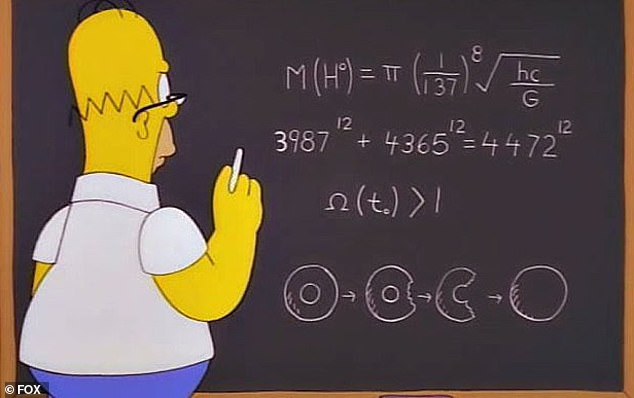 Math fun! One of the more shocking instances has to be Homer’s near-prediction for the equation for the mass of the Higgs boson particle

One of the more shocking instances of life imitating art, though, has to be Homer’s near-prediction for the equation for the mass of the Higgs boson particle, also known as the ‘God particle.’

Homer wrote in on a blackboard in the 1998 episode ‘The Wizard of Evergreen Terrace,’ and physicist Dr. Simon Singh told The Independent that it’s actually pretty accurate — even though scientists didn’t discover proof of the Higgs boson until 2013,

Despite all the correct ‘predictions’ over the years, writer Al Jean insisted they were just coincidences, and notes that in decades of content, some jokes are bound to become reality.

‘If you make enough predictions then 10 per cent will turn out to be right,’ he told Radio 1 Newsbeat.