Babies conceived in rural areas are far more likely to die before, during or immediately after birth than those in more urban parts of the US, according to CDC’s first-ever report on the disparity.

The most common causes of death differed dramatically between the most remote and most populated areas, with sudden infant death syndrome (SIDS), for example, being twice as common in rural areas as it is in urban ones.

Maternal complications and low birth weights, on the other hand, were to blame for far more deaths in urban areas and relatively uncommon in rural ones.

Previous research has documented the disparities between health outcomes – especially for mothers and infants – in the two kinds of communities, but this report is the first large national investigation into particular causes of death for babies.

Late last year, the CDC’s report on the incidence of infant mortality throughout the country between 2013 and 2015 found that these deaths were on the rise, particularly in less densely-populated areas.

‘After seeing the differences, we came to the idea that there were differences by specific causes of death,’ which prompted the new report, study co-author Danielle Ely told Daily Mail Online.

Overall, infant mortality in counties classified as rural was 6.69 deaths per every 1,000 live births.

The rate of infant deaths in urban areas was significantly lower, at 5.49 per 1,000.

‘A commonly cited reason [for this gap] in other research is that there is less access to health care in rural areas than urban ones, which could contribute to the disparities,’ said Ely.

‘However, there is no way to say definitively what about being rural would cause the higher disparities than in urban communities,’ she added.

The gaps in the overall mortality trends are not, at first glance, so alarming, but the differences between how these infants are dying were far more worrisome.

Congenital malformations, or birth defects, were the leading cause of infant deaths in all parts of the country, accounting for a staggering proportion of children who did not survive their first year of life.

In rural areas, the death rate was just under 147 birth defect-related deaths per 100,000 live births, while small and urban counties saw only 131.47 deaths per 100,00 from the same conditions.

Rates of deaths from SIDS and unintentional injuries followed similar patterns, with the number of deaths falling as population density rose.

‘The most surprising findings had to do with SIDS, particularly that rates in rural areas that twice as high s in large urban areas,’ said Ely.

‘That wasn’t something I was aware of going into the project,’ she added.

Oddly, two of the leading overall causes of infant deaths – low birth weights and maternal complications – were actually less common in rural areas than urban ones.

Recent research has documented the disproportionately high number of women who die during childbirth in rural areas. 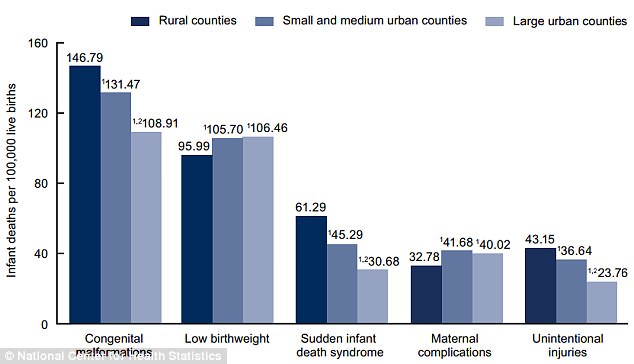 Rates of SIDS and deaths from birth defects are particularly high in rural areas, where maternal complications and low birth weights cause comparatively few infant deaths

Paradoxically, though, the CDC’s new report found that only 32.72 out of every 100,000 infants in rural areas die due to their mothers’ complications.

That number was noticeably lower than the 41.45 and 39.72 out of 100,000 infants infants who died the same way in small or medium and large urban counties, respectively.

‘We went into this research with the expectation that some causes of death would be higher in rural areas, but not necessarily all,’ said Ely.

‘If anything, I was most surprised by the magnitude of difference between some of them,’ she added.

Ely hopes that the new report will help doctors and public health officials know where to look as they explore the causes of regional disparities in health care and outcomes.

‘This goes into the larger push toward looking at at these differences between rural and urban places,’ she said.

‘I think it’s good to document that these [gaps] are happening, and the findings may relate to different ways that counties or states can deal with any disparities between them,’ Ely said of the report.