Far-right candidate and ex-soldier Jair Bolsonaro has defeated his leftist rival in the Brazilian elections.

A far-right former army captain, Bolsonaro is vowing to rescue the country from crisis with a firm grip.

Bolsonaro tapped into deep anti-establishment anger throughout the election campaign, but repulsed many with his denigrating remarks about women, gay and black people.

He faced leftist Fernando Haddad, a former Sao Paulo mayor in the election.

He had an eight- to 10-point lead going in, according to two final opinion polls published Saturday, which gave him about 55 percent of the vote.

And while Haddad has made up ground – he trailed by as much as 18 points two weeks ago – it would take a dramatic surge for him to win.

‘This thing is going to turn around,’ Haddad, a former Sao Paulo mayor, buoyantly told thousands of supporters at his final campaign rally Saturday.

Bolsonaro – who is nicknamed ‘Tropical Trump’ – made his own final pitch on social media, the only place he has campaigned since an attacker stabbed him in the stomach at a rally last month, sending him to the hospital for three weeks.

‘God willing, tomorrow will be our new independence day,’ he tweeted.

Coming on the heels of a punishing recession and staggering corruption scandal, the Latin American giant’s elections have thrown up a spectacular cast of characters, even by the standards of these divisive, anti-establishment times.

Bolsonaro, 63, repulses a large part of the electorate – and many outside the country – with his overtly misogynistic, homophobic and racist rhetoric.

He once told a lawmaker he opposed that she ‘wasn’t worth raping;’ he has said he would rather see his sons die than come out as gay; and he commented after visiting one black community that they ‘do nothing – they’re so useless I doubt they can procreate.’ 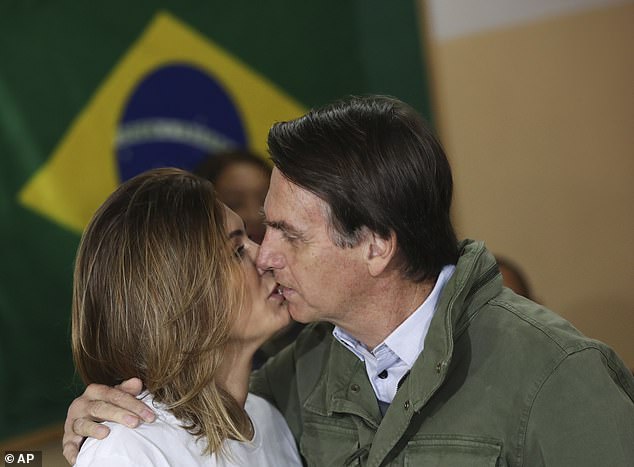 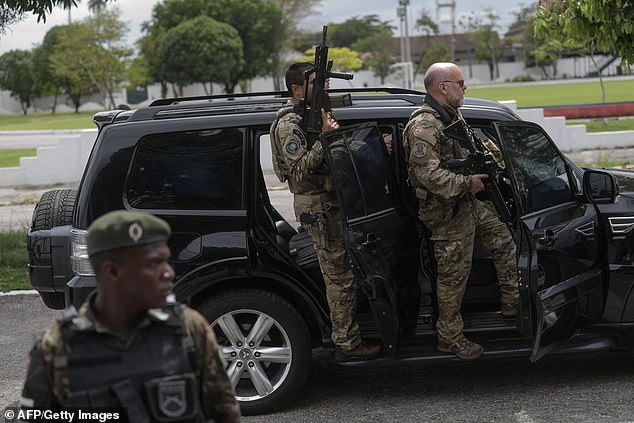 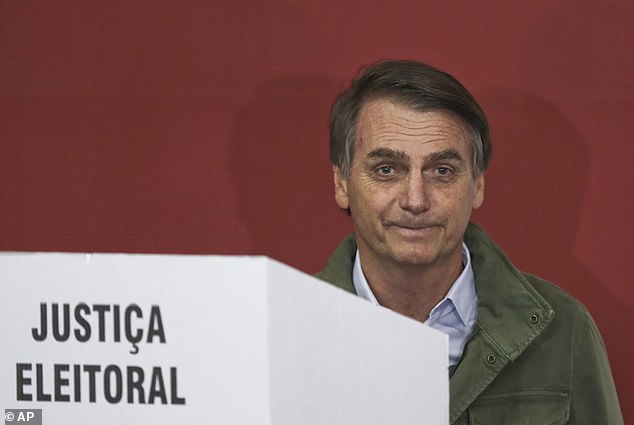 Jair Bolsonaro, presidential candidate with the Social Liberal Party, gestures next to an electronic voting booth

But an even larger portion of voters reject Haddad and the tarnished legacy of his Workers’ Party.

Haddad, 55, is standing as a surrogate for jailed ex-president Luiz Inacio Lula da Silva, who led Brazil through the boom years of 2003 to 2010.

Lula remains the country’s most popular politician, despite being accused of masterminding the massive pilfering of state oil company Petrobras.

But the hugely divisive Workers’ Party founder was barred from running because he is serving a 12-year prison sentence.

Haddad, who lacks Lula’s natural charisma, has struggled to unite opposition to Bolsonaro, despite mounting fears over what the former army officer’s presidency would look like.

His campaign slogan is to make Brazil ‘happy again’ – as in Lula’s poverty-fighting golden days – but it is an uncomfortable legacy.

He ultimately ended up pulling his controversial mentor’s image from his campaign ads. 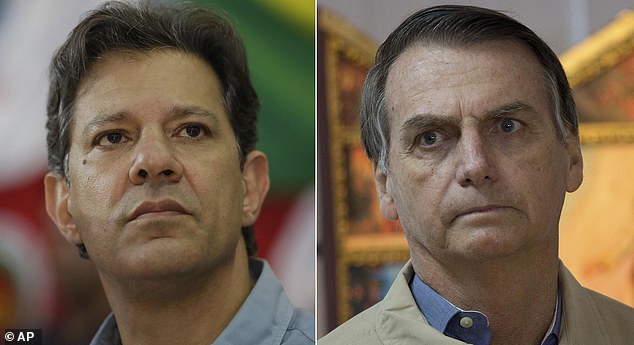 Bolsonaro (right) has an eight- to 10-point lead over leftist Fernando Haddad (left) going in, according to two final opinion polls released on Saturday 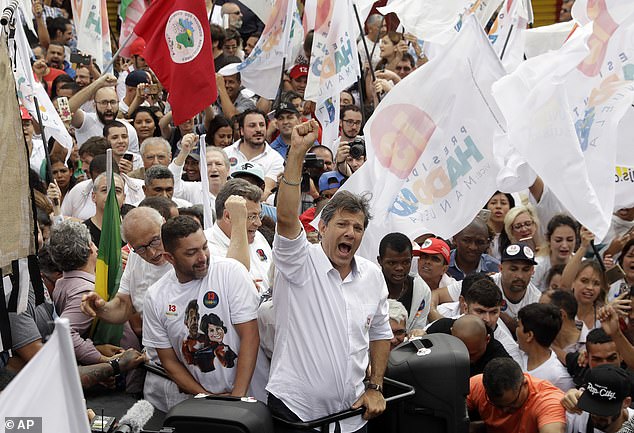 ‘This thing is going to turn around,’ Haddad, a former Sao Paulo mayor, buoyantly told thousands of supporters at his final campaign rally Saturday (pictured)

Bolsonaro harks back to a different past: that of the ‘Brazilian miracle’ of rapid industrialisation under the military regime that ruled from 1964 to 1985.

He has drawn criticism for his vocal defense of the brutal dictatorship.

He once said the regime’s ‘mistake’ was that it tortured, instead of killing, leftist dissidents and suspected sympathisers.

But in an anti-establishment climate, his message has sold better than Haddad’s.

The election looks set to be decided as much by Brazilians voting against something as for it.

One poll released Saturday found 39 percent of voters said they would not cast a ballot for Bolsonaro under any circumstances.

The rejection rate for Haddad was even higher: 44 percent. 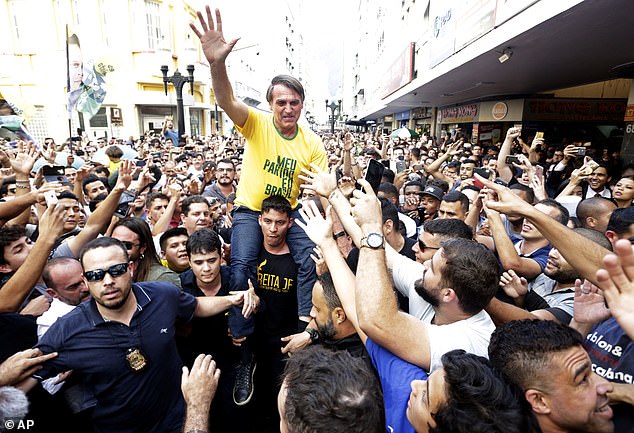 Bolsonaro is taken on the shoulders of a supporter moments before being stabbed during a campaign rally in Juiz de Fora, Brazil, in September 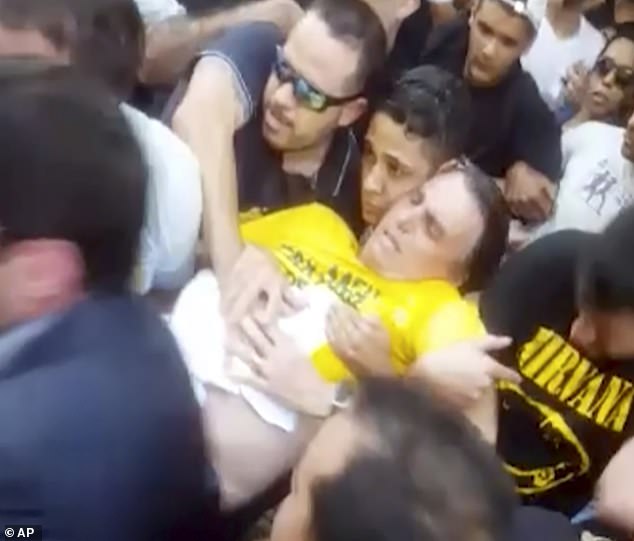 Bolsonaro has only campaigned on Twitter since an attacker stabbed him in the stomach at a rally, sending him to the hospital for three weeks. Pictured, Bolsonaro after the attack

Running for the formerly minor Social Liberal Party, Bolsonaro is, according to many political analysts, a symptom of the crises ailing Brazil since the Workers Party’s 13 years in power came crashing to an end with the impeachment of Dilma Rousseff in 2016.

Among those crises: Brazil’s economy shrank nearly seven percent during its worst-ever recession, from 2015 to 2016; the multi-billion-dollar Petrobras scandal has left voters disgusted with the seemingly bottomless corruption of politicians and business executives; and there is widespread outrage over violent crime, in a country that registered a record 63,880 murders last year.

Outgoing President Michel Temer, himself implicated in corruption, is set to leave office on January 1 as the most unpopular president in Brazil’s modern democracy.

Brazil’s 147 million voters will cast their ballots from 11am GMT to 10pm GMT. Voting is mandatory. The results are expected around 11pm GMT.