Farage on course to thrash Tories as Euro Election polls close – and Boris could be heading to No10, Mail poll reveals

Nigel Farage is heading for a landslide victory in the European Parliament elections – and Boris Johnson has raced into a big early lead in the battle to succeed Theresa May as Prime Minister.

They are the main findings of an opinion survey which concluded at midnight on Wednesday after it became clear that Mrs May was on the brink of resigning.

The Survation poll for the Daily Mail shows Mr Farage’s Brexit Party well ahead in the European elections on 31 per cent, trailed by Labour on 23, the Conservatives on 14 and the Lib Dems on 12.

Nearly seven out of ten Tory voters said the reason they did not intend to vote for Mrs May yesterday was because of her failure to deliver Brexit. Calls for her to step down were backed by 57 per cent of Conservatives with 25 per cent against.

With the Tory leadership contest about to begin, most of the party’s supporters appear to have already decided that former Foreign Secretary Johnson is the best person to revive their dismal ratings and sort out the Brexit chaos.

A total of 36 per cent of Conservatives said he should be next leader, with Home Secretary Sajid Javid a distant second on nine per cent, followed by Environment Secretary Michael Gove on seven and Foreign Secretary Jeremy Hunt on five.

The highest placed women candidates are Andrea Leadsom, who resigned from the Cabinet on Wednesday, and fellow Brexiteer, former TV presenter Esther McVey.

Both are on three per cent. Mr Johnson has almost as big a lead over his Conservative rivals among voters as a whole. With the Tories expected to choose a new leader by the end of July, his fellow leadership contenders will have their work cut out to close the gap. 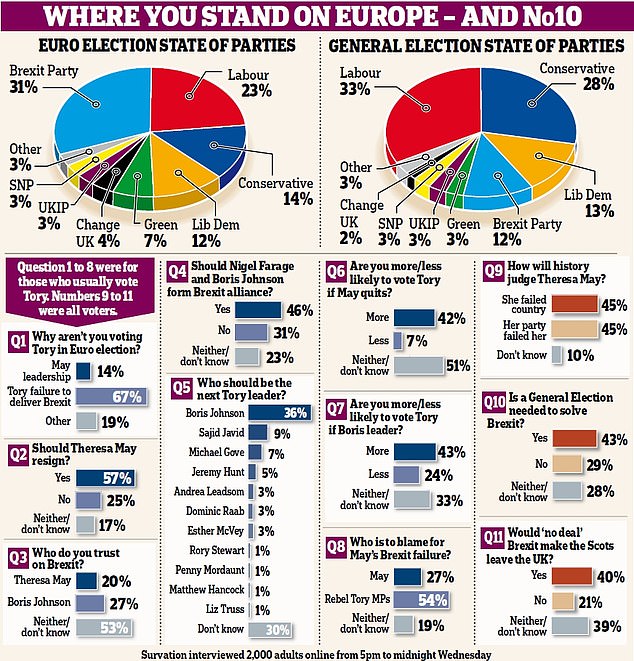 If he does replace Mrs May, Mr Johnson’s campaigning skills may be put to the test very quickly. Despite Mr Farage’s success in the European elections, a total of 43 per cent say a General Election will be needed to sort out the Brexit mess, with 29 per cent in disagreement.

The good news for the Tories is that the poll suggests their popularity will go up if Mrs May quits. A total of 42 per cent of Conservatives say this would make them more likely to vote for the party.

Furthermore, 43 per cent of Tories say they are more likely to vote for the Party with Mr Johnson at the helm; 24 per cent are less likely to do so.

Mr Farage yesterday threatened to follow up his anticipated success in the European elections in the next General Election, warning MPs in the three main parties they would ‘all be unemployed’ if the Brexit Party challenged them.

But the Survation poll suggests he could fall short of that target. In a General Election, the Brexit Party’s support of 31 in the European elections would fall to 12, not enough to guarantee them winning a single MP.

A total of 46 per cent of Conservatives back calls to neutralise the threat from the Brexit Party by forming a pact with it; 31 per cent are against such a move.

The survey shows there is little enthusiasm for the kind of No Deal Brexit advocated by Mr Johnson and Mr Farage, but voters believe it is becoming increasingly likely.

And there is grave concern that a No Deal Brexit could break up the UK. Forty per cent of voters fear it would lead to Scotland becoming independent against 21 per cent who disagree. Thirty per cent say it would result in Northern Ireland becoming part of a United Ireland; 17 per cent disagree.

Despite Tory support for Mrs May’s decision to go, Conservative voters do not hold her primarily responsible for her downfall. A total of 54 per cent point the finger at rebel Tory MPs; 27 per cent say she has herself to blame.

Voters as a whole are divided on how she will be judged by history. A total of 45 per cent say she failed her country; the same number say her party failed her.

The poll shows that Jeremy Corbyn’s hold on the Labour leadership is far from secure. A total of 55 per cent of voters said he should resign and 40 per cent would be more likely to vote Labour if he was replaced.