Boris Johnson may well be looking forward to sharing a celebratory pint of Cornish ale with his Australian counterpart Scott Morrison.

The two men intend to use the G7 summit near St Ives in Cornwall next month to sign a historic free trade agreement following the UK departure from the EU.

But as the gathering gets under way at the luxury Carbis Bay Hotel, perched above its own private beach, many British farmers will also be in need of a stiff drink.

The trade deal between the UK and Australia promises to sweep away tariffs and quotas on goods and services from outside the EU which have protected them for decades. It covers everything from wine to whisky, lead to gold and cars to services.

But just as Brexit negotiations were held up by a row over fishing rights, the proposed deal with Australia has been threatened by a battle over beef.

The pact has provoked howls of anguish from the National Farmers Union (NFU), and a cabinet split between Trade Secretary Liz Truss and the Environment Secretary George Eustice.

The NFU has warned hundreds of smaller family farms will be wiped out as the UK is flooded with cheap, mass-produced Australian beef and lamb.

Its president, Minette Batters, has even claimed that the deal could destroy Britain’s rolling countryside, turning ‘our green and pleasant land’ into the ‘Australian outback’, as small family farms are replaced with vast, Aussie-style cattle stations.

And she has cautioned that the free trade deal would set a dangerous precedent for negotiations with other countries including the US and New Zealand – leaving UK farmers increasingly exposed.

Efforts have since been made to protect British farmers by phasing out tariffs over 15 years. These latest terms were put forward by Truss to her Australian opposite number Dan Tehan on Friday last week.

But here in Australia, more than 9,000 miles away from St Ives, there is little sympathy for ‘Pom’ farmers. Trevor Whittington’s family have been farming for five generations, starting out in 1830, when they emigrated from Sussex as one of the first wave of colonial settlers in Western Australia.

His farm, which produces sheep and wheat, lies near Corrigin – a small country town in Western Australia’s central wheat belt region, about 140 miles inland from Perth.

Whittington, who is a former chief of staff to the minister for agriculture who now heads the Western Australian Farmers Federation in Perth, is quick to point out that the UK has ‘some of the best farmers in the world’.

But – using a cricketing analogy – he sees nothing wrong with a little healthy competition to sort out the weak from the strong.

‘The best of the UK farmers will be competitive with the best we can put on the paddock,’ he said. ‘But the rest will be like putting a country eleven against an Australian Ashes team – they will belt them out of the park.’

While UK farmers have grown soft on EU subsidies and tariff protection, Whittington says Australian farmers have had to compete globally without any such support.

This, he says, has given them an edge.

‘For 50 years the UK has been playing against second-rate teams in Europe and now they are worried about how far they have fallen behind.

‘Having removed all our government protections over the last 40 years, Australian farmers have learnt to compete globally in an environment of protection.

So now, with free trade opening up these markets, we are highly competitive versus the small, supported UK farmers running a few sheep and cattle.’ 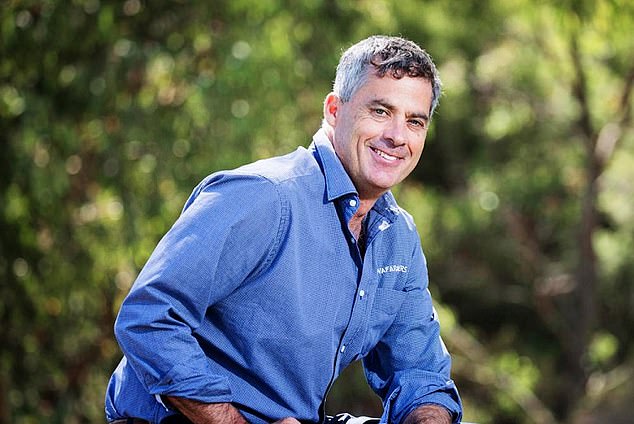 ‘We’ll belt them out of the park’: Trevor Whittington says Australian farmers have had to compete globally without subsidies and tariff protection

Having said all of this, he believes most UK farmers have little to fear from a free trade deal. Despite China imposing sanctions on Australian beef, farmers still cannot produce enough meat to satisfy soaring demand from South East Asia, Japan and the Middle East.

Whittington says this is partly due to huge swathes of grazing land being turned over to grow more lucrative crops, with a new generation of farmers baulking at the prospect of tending cattle or shearing sheep in the outback heat.

But it has also been driven by a shortage of immigrant farm workers during the Covid crisis, caused by the closure of Australia’s international borders.

According to Whittington, there is little incentive for farmers to pay the extra freight costs to send their goods all the way to the UK.

And the idea that the UK will be flooded with cheap cuts from Australia also makes no sense, he said.

Any meat exported to the UK from Down Under is more likely to be premium quality, such as Wagyu beef. But Australia’s biggest beef exporter, the Australian Agricultural Company, has set alarm bells ringing by predicting a deal could boost UK sales by as much as tenfold.

It specialises in grain-fed and Wagyu beef, and manages a cattle herd of 400,000 spread across almost 16m acres.

The NFU has warned that such a dramatic increase in exports from Down Under would hit UK farmers who produce more expensive cuts, including high-end Scottish beef farmers with small herds. But even if beef exports from Australia do rise tenfold, it would still be a minor player.

The UK only imported 0.15 per cent of its beef from Australia last year, compared with 14 per cent of lamb and mutton.

Australia’s High Commissioner George Brandis has attacked ‘wild claims’ made by the NFU and accused British farmers of mounting a ‘scare campaign’ to scuttle an agreement.

Writing to all 365 Tory MPs last week, he warned failure to strike a deal would send a ‘catastrophic signal’ to the rest of the world about protectionism.

Certainly, Boris Johnson will be painfully aware of this risk.

Australia is only the UK’s eighth-biggest trading partner, and a study last summer suggested that a free trade deal would boost the UK economy by just 0.02 per cent.

Boris Johnson has always had his eyes on a bigger prize.

He hopes a deal with Australia will pave the way for more lucrative agreements, including with the US.

The pact with Australia is also seen as a stepping stone to membership of the Asia Pacific free trade pact, whose 11 members include Australia, Japan, Canada and New Zealand.

But the Prime Minister will also be acutely aware that if the deal with Australia falls apart, his promise to turn Britain into a global free-trading nation after Brexit will start to ring hollow.