Fascinating images from the 1950s reveal how Britons queued up to give blood shortly after the National Blood Transfusion service began.

The incredible photos offer a rare glimpse inside a blood drive in London in the 1950s and pictures show a doctor performing a prick test on a woman’s finger to test her blood, in order to make sure she is in a fit state of health to donate.

This is while another woman is pictured giving blood, while her son eats biscuits.Other shots show how the doctors and nurses kept the donation centres clean, as the images show bottles being steamed in the steriliser, before being used again for other blood donations. Nurses can also be seen assembling apparatus for hospital use and using special wrappers for sterilising the sets.

The interesting photographs show the inner workings of a blood drive in North London in 1951 by the National Blood Transfusion Service. 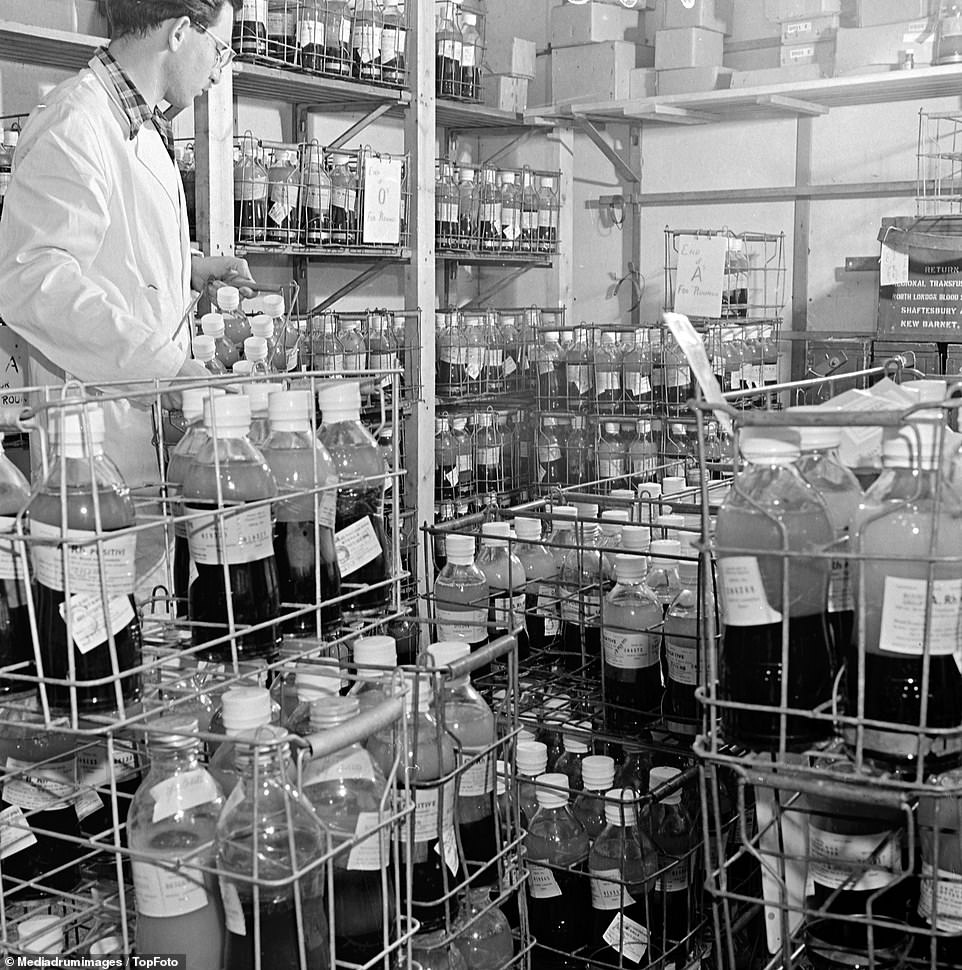 A worker can be seen in the cold room of the blood donation service where blood needs to be stored at 4-6 degrees centigrade. The bottles are all labelled with the different blood types of donors 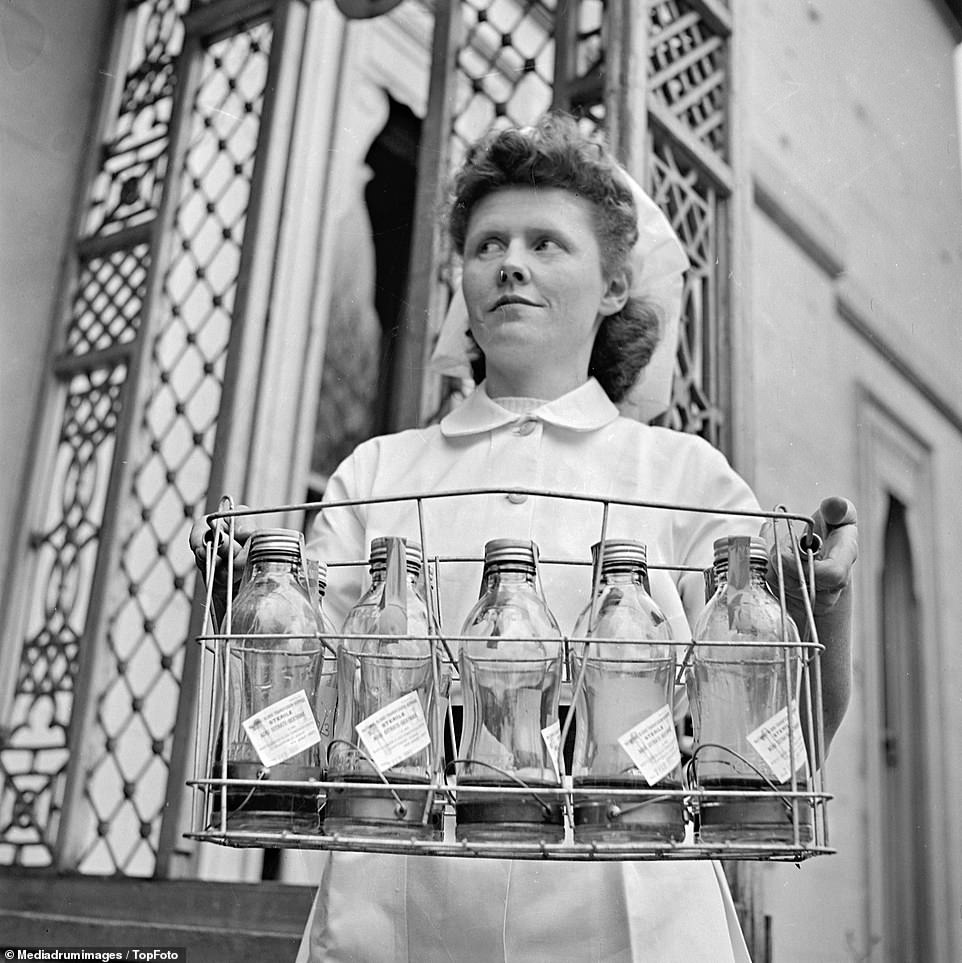 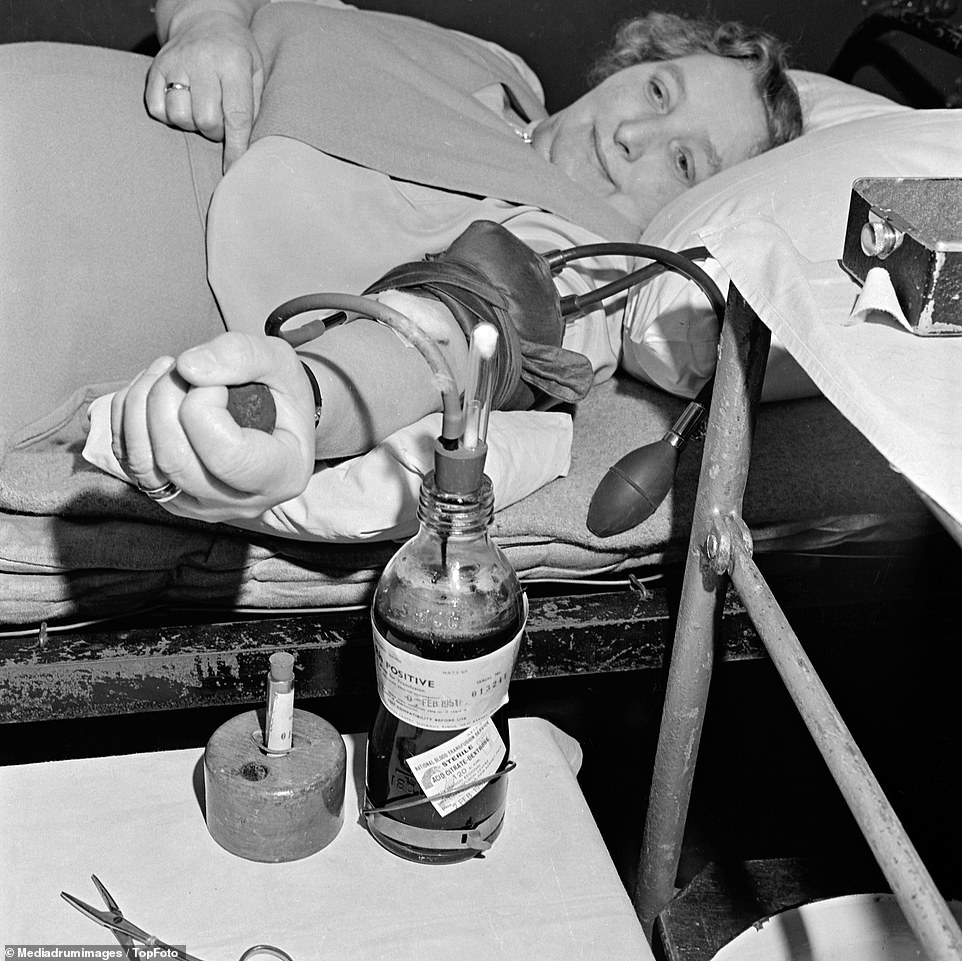 Mrs Sims, the administrator at the centre,  is pictured lying on a bed as she gives blood. We can see the bottle pictured which has a specific label on detailing Mrs Sims’ blood type of positive 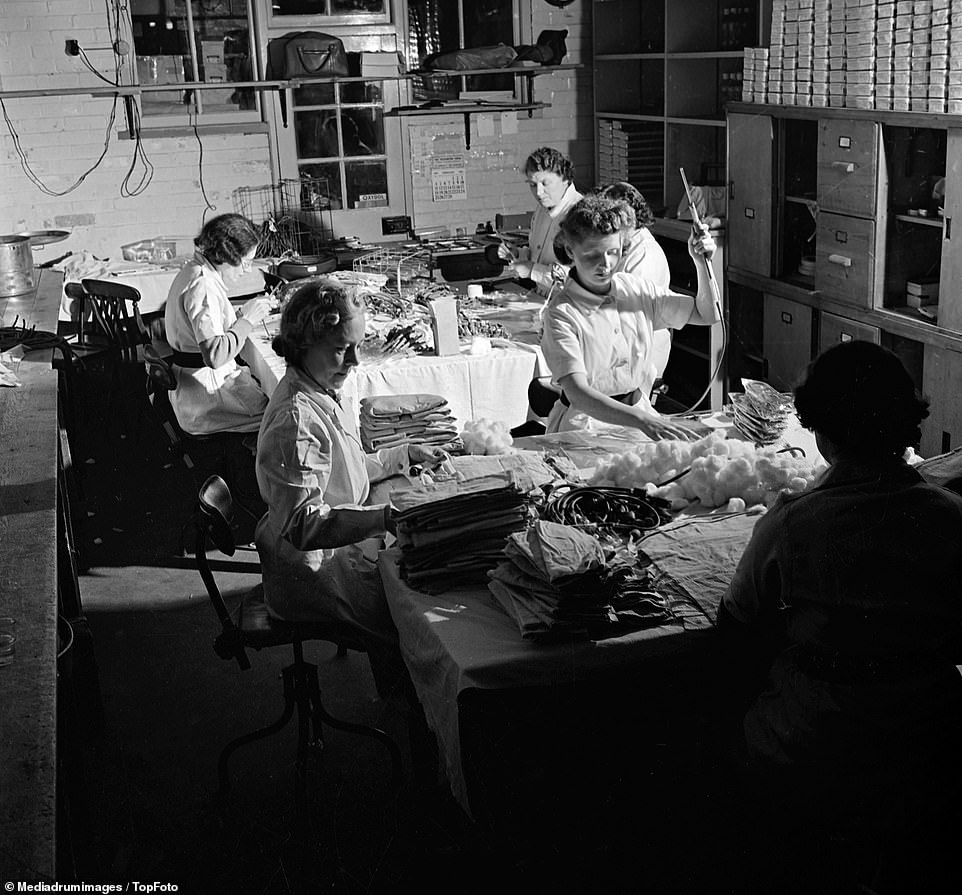 Three nurses can be seen assembling apparatus for hospital use while using special wrapper for sterilising the sets. The tables are covered in items such as tubes, cotton wool and blood bags. The women all wear white uniforms with a belt around the waist and are sat in the middle of a room containing filing cabinets and personal possessions 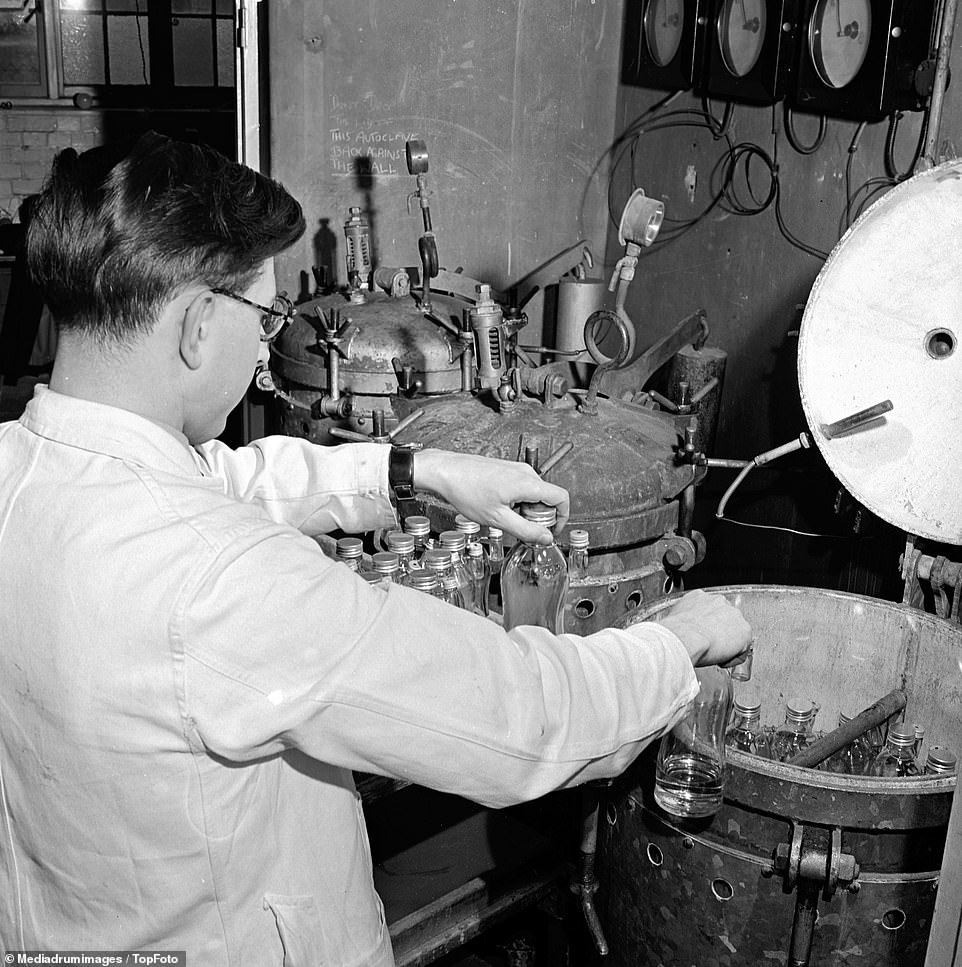 A man can be seen using the sterilising the equipment as he puts the glass donation bottles in the sterilisers before they are used again on other blood donors. The equipment also has various pressure gauges and there is some writing on the wall which reads ‘this autoclave back against the wall’ 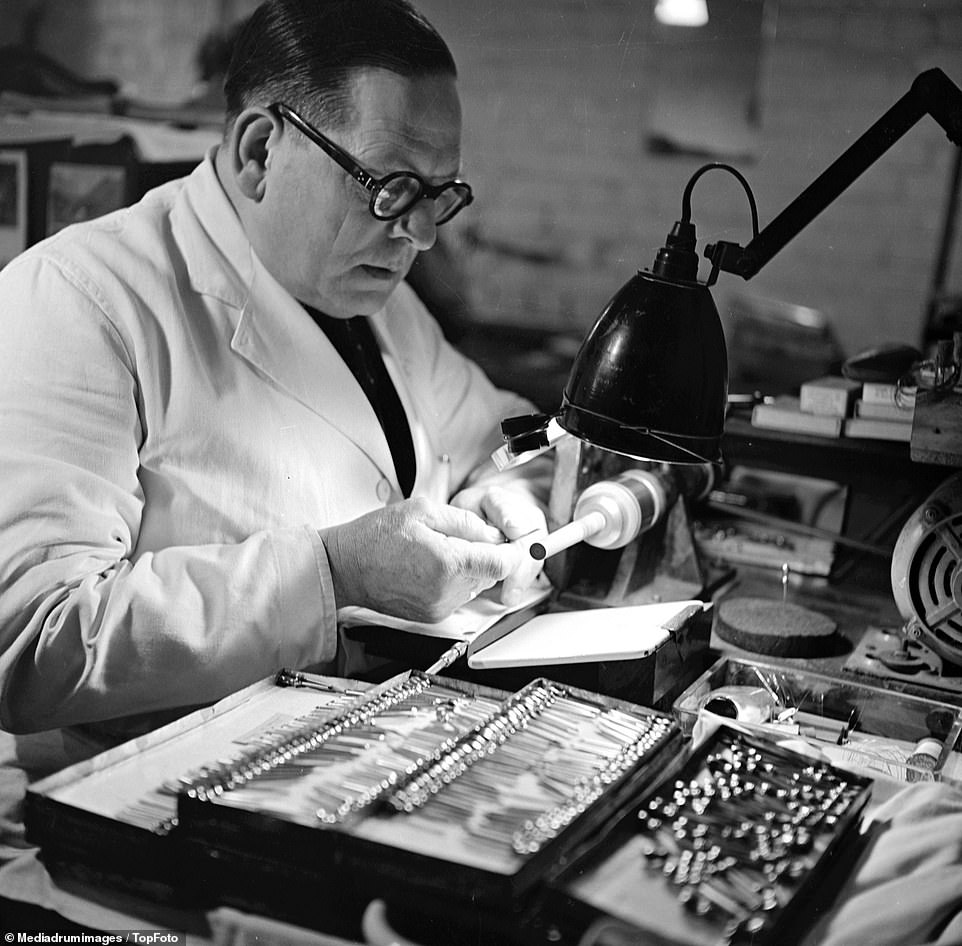 Hard at work: the use of machines was no where near as prominent in the 1950s as it is today, and one man can be seen sat at a table while he sharpens an assortment of needles by hand 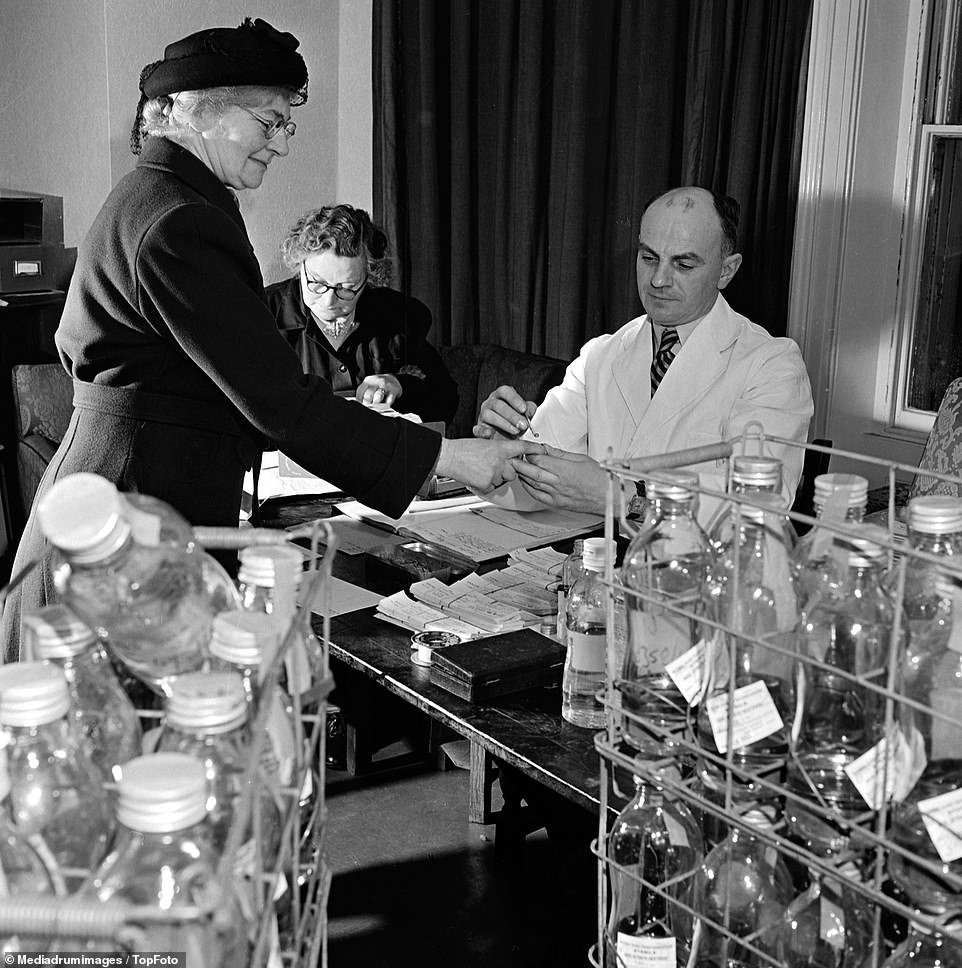 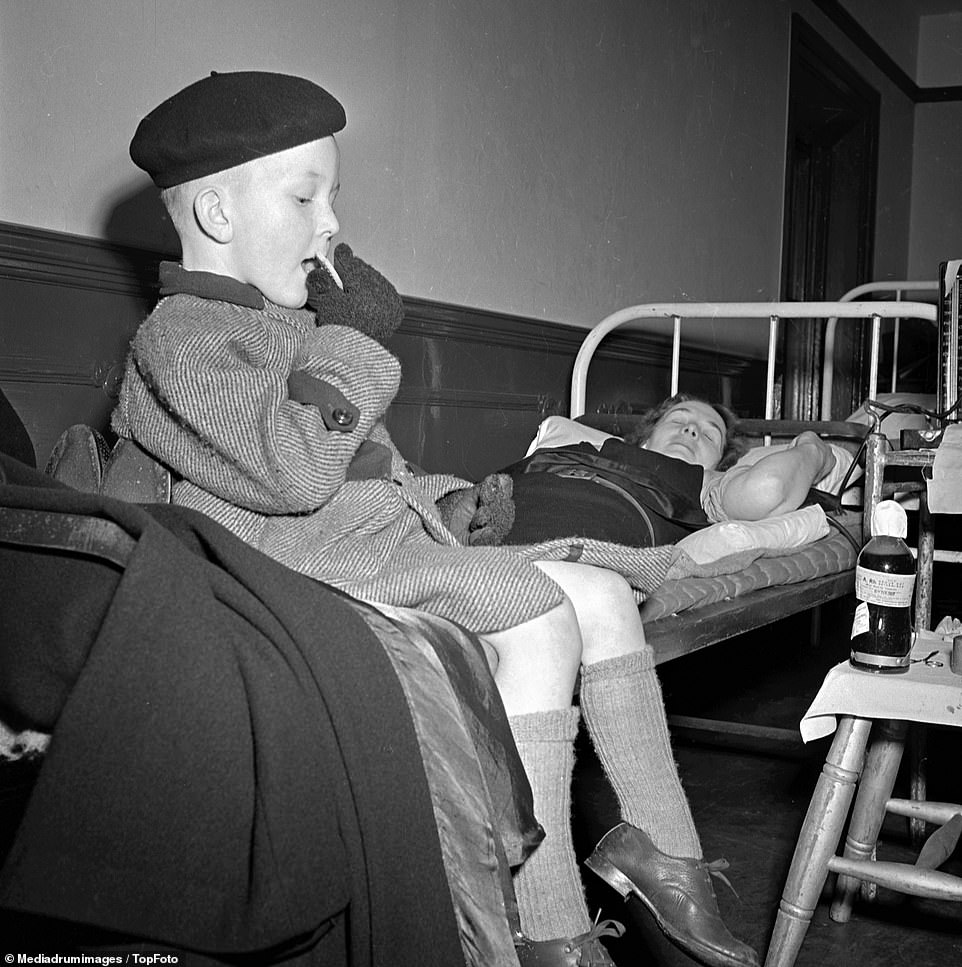 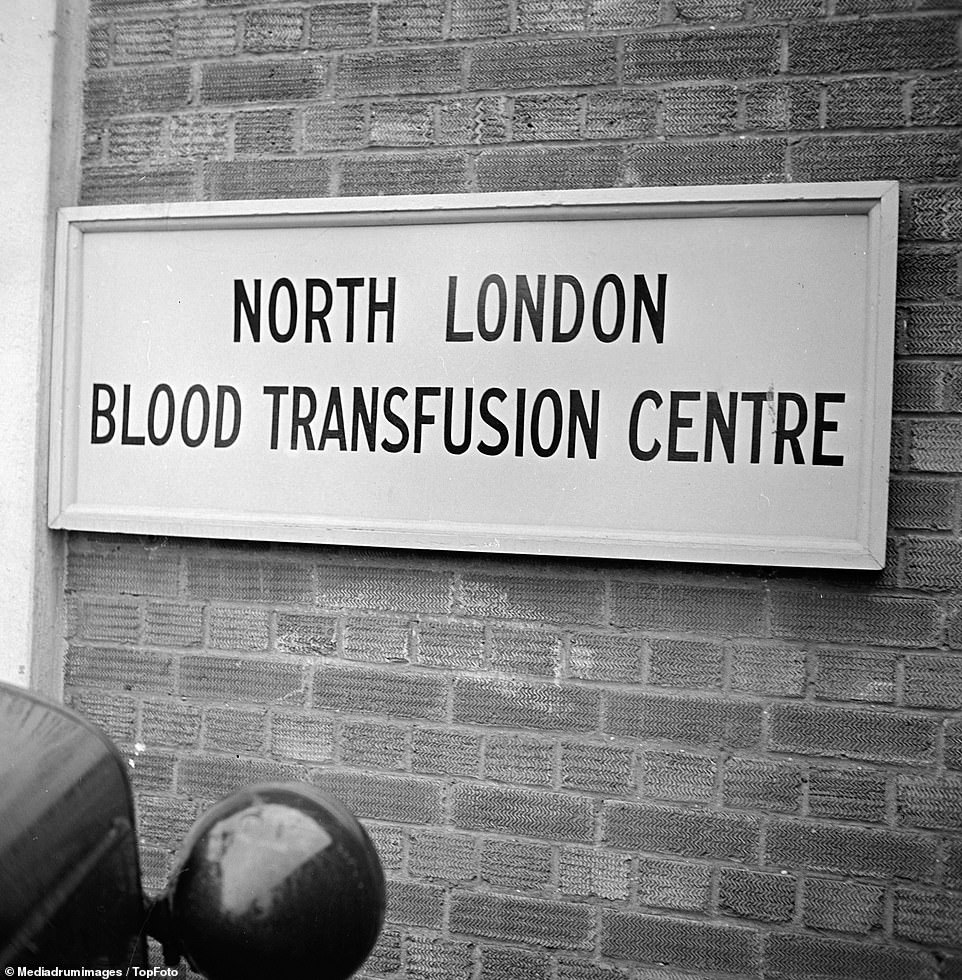 The NHS’ lifesaving service is required 365 days a year and they need around 200,000 new donors every year to ensure they have the right mix of blood types. Every day 6,000 donations are needed to meet the needs of patients across England.

Blood is made up of a number of components, including red blood cells, platelets and plasma. Each of these can be used to treat many different conditions, such as anaemia, cancer, blood disorders, and those having surgery.

The National Blood Transfusion Service was created 72 years ago and it has propelled in size since it was first established. 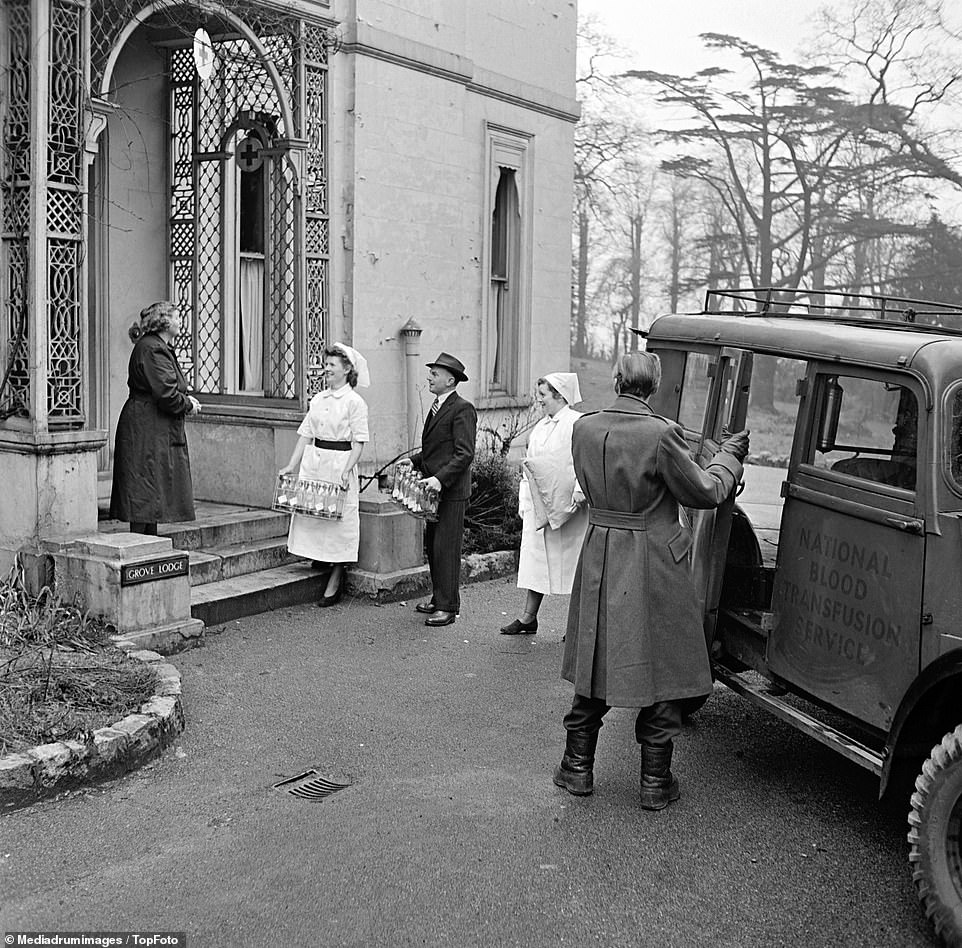 A National Blood Transfusion Service vehicle parks up outside a property in Muswell Hill, London,  and Mrs Sims (left) welcomes a doctor and two nurses to Grove Lodge where they are due to take blood 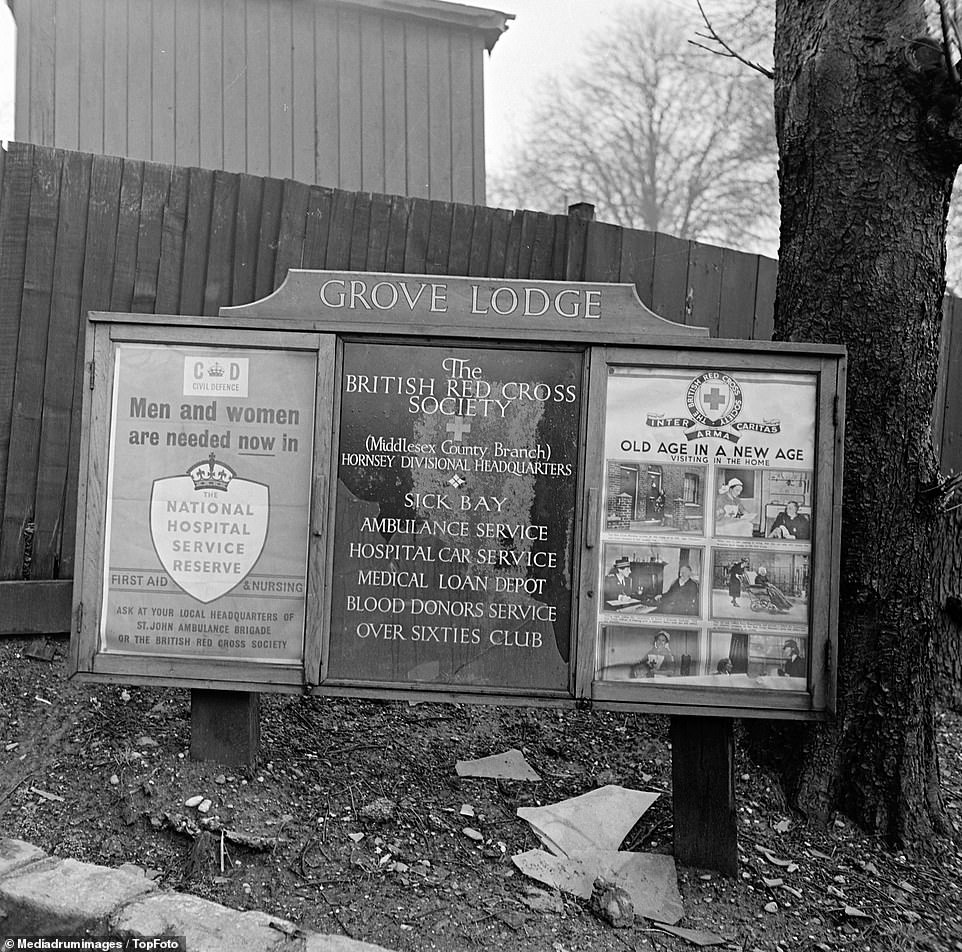 The outside of the British Red Cross Society’s Hornsey Divisional Headquarters, which offers a blood donor service along with a hospital car service. The sign also states that the Civil Defence service need men and women for the National Hospital Service Reserve 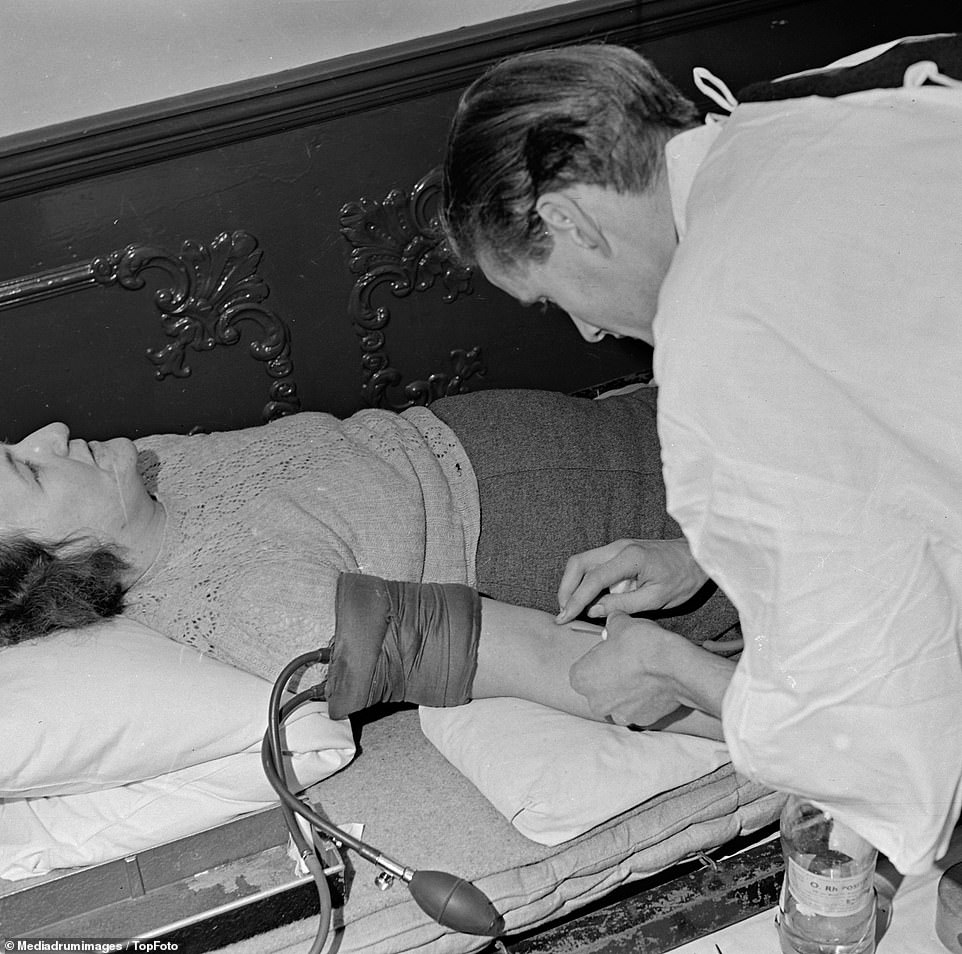 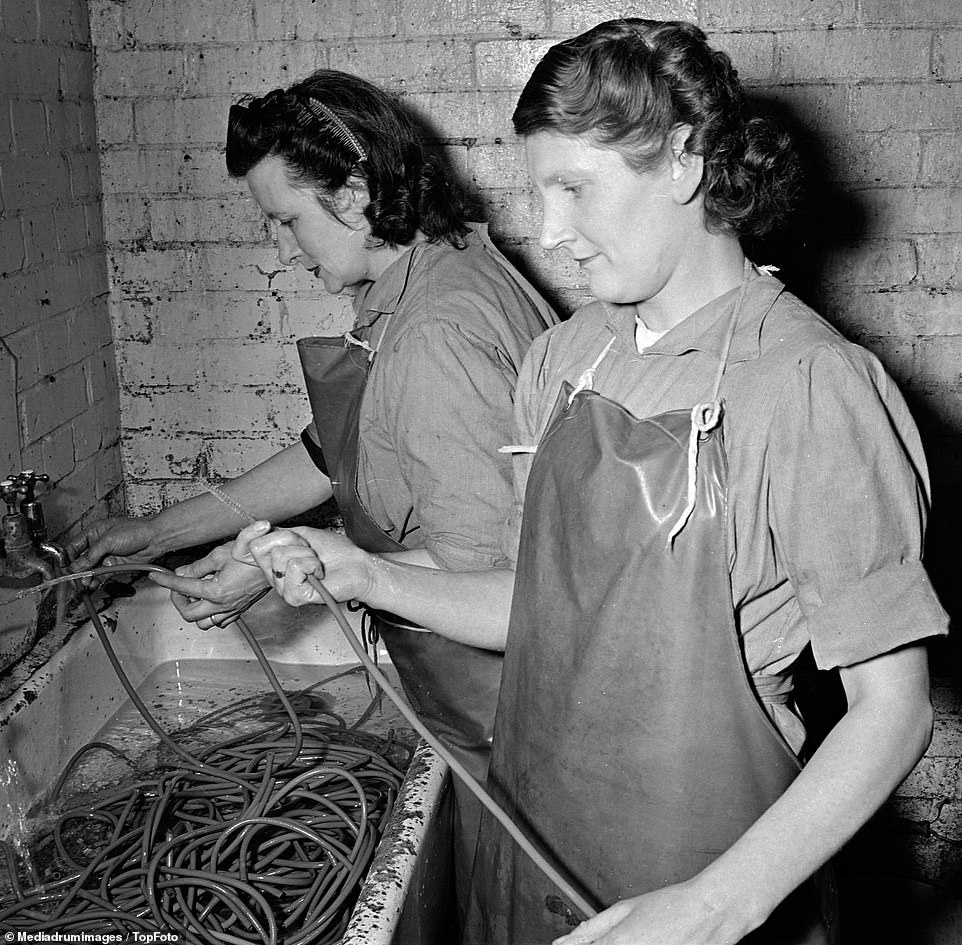 Nurses can be seen wearing plastic aprons and cleaning the tubes and pipes in a sink. The pipes need to be thoroughly sterilised before use

Blood banks were originally created in order to meet the needs of injured civilians and service personnel. The banks were then taken over by the Ministry of Health in September 1946 and the National Blood Transfusion Service was born, now part of NHS Blood and Transplant.

This year NHS Blood and Transplant is running a new campaign in order to get people up and down the country to give blood, as the service says most of its donors are above the age of 45.

The service is running 24 ‘What’s Your Type’ blood testing events in cities and towns through February during England, as it announced that it needs 4,900 new donors just for February alone. 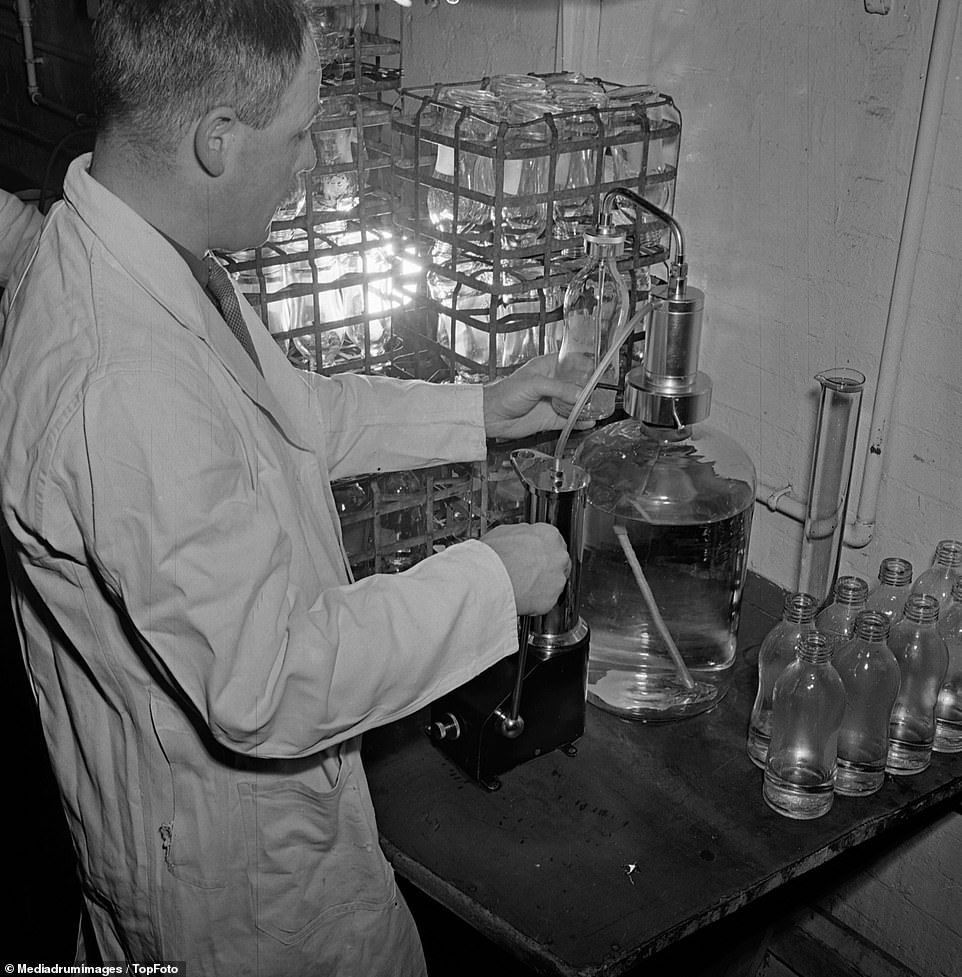 A man can be seen putting a small amount of Glucose citrate into each of the glass bottles which helps to preserve the blood. This then goes into the patient when the blood is transfused 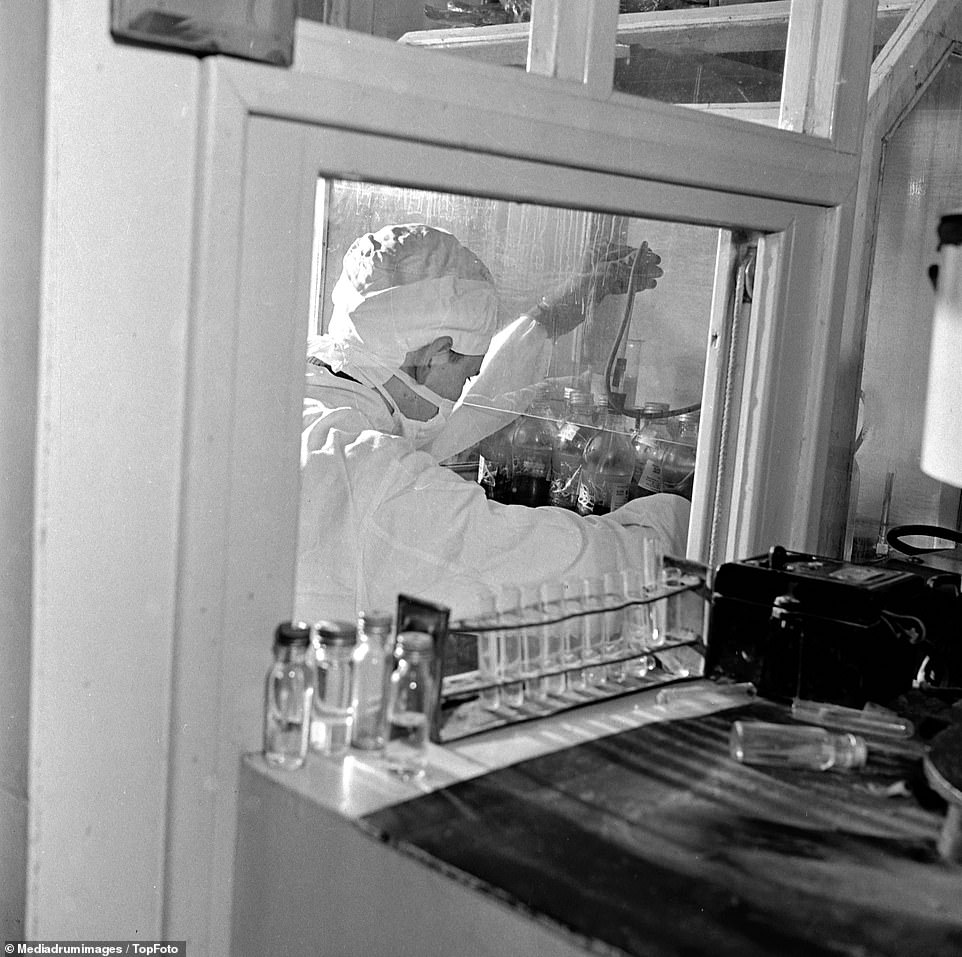 Unused blood is returned from the hospitals before three weeks expires, the plasma is siphoned off for dehydrating (pictured above). The man looks deep in concentration as he siphons off the plasma as he is surrounding by medical equipment 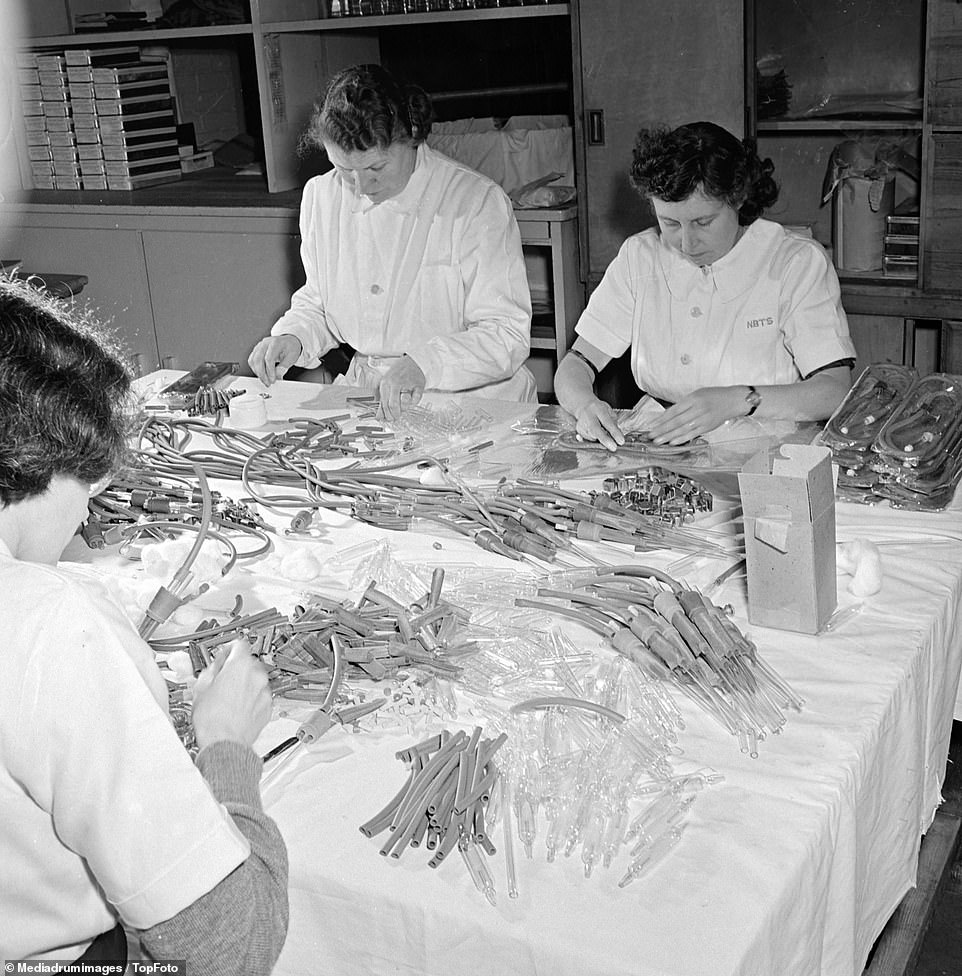 These nurses are assembling apparatus for hospital use and are using special wrappers for sterilising the sets . They would assemble 15,000 blood taking sets a week 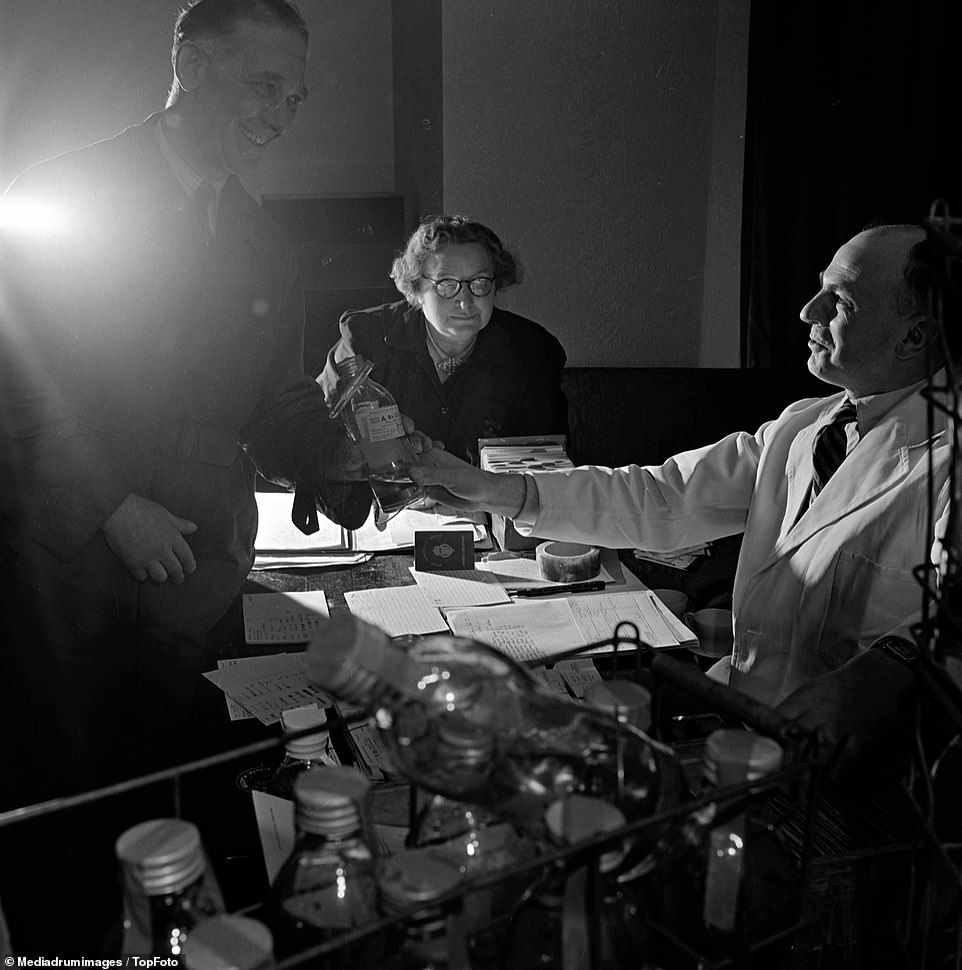 A Doctor (right) has performed a prick test on this gentleman’s finger to test his blood to see if it is in a fit state of health to give . He is now given a bottle and label and sent into the next room . The secretary, Mrs Sims (centre) records all the details

New tests by the NHS see donors having their fingers pricked and their blood type revealed immediately. It has been created as there is a clear need for certain blood types across the UK.

Between 2014 to 2018, there was a 13% increase in the proportion of O negative being issued to hospitals. O negative is the universal donor group which can be given to almost anyone. 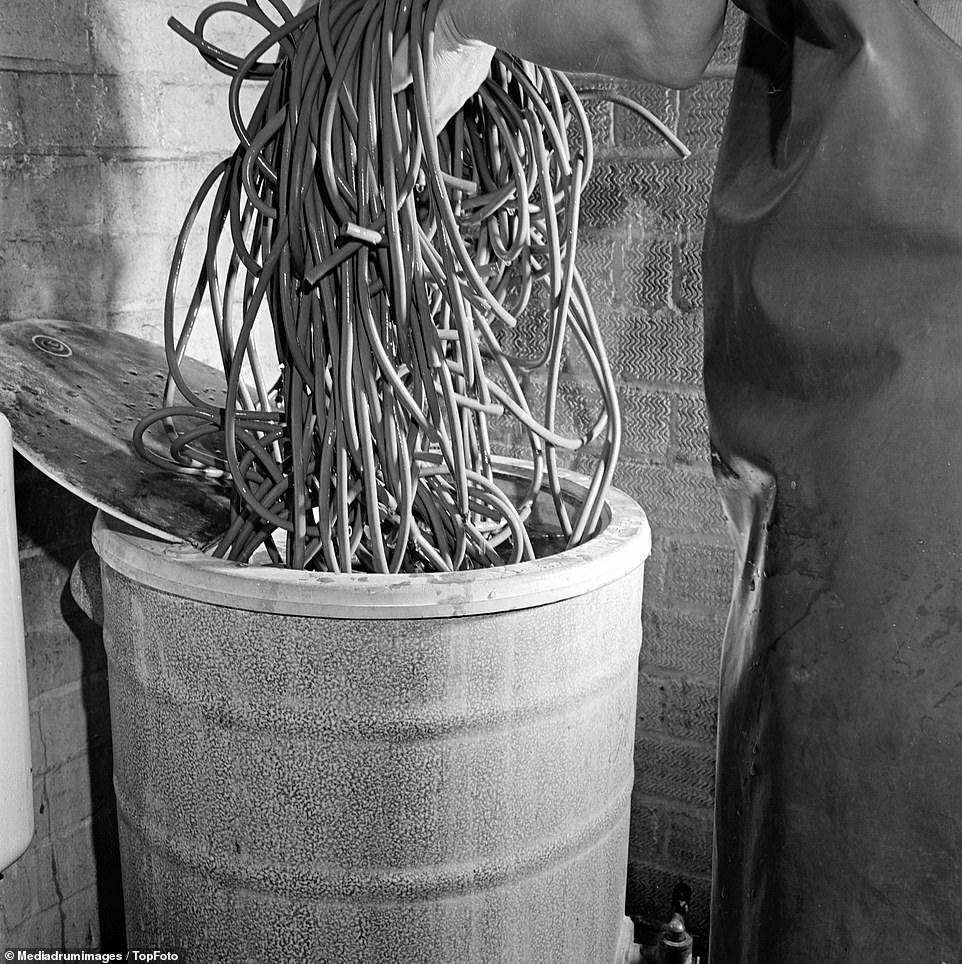 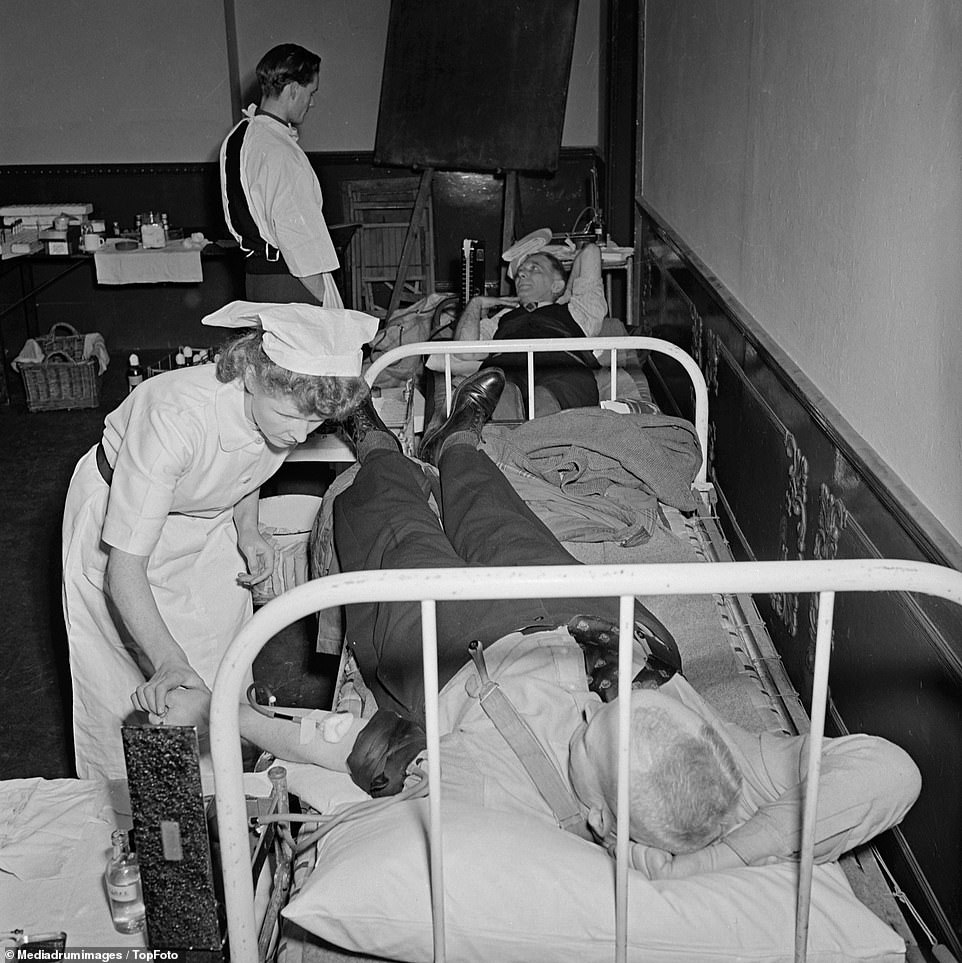 Two men laying on beds as they give blood, one attended by the doctor, the other by the nurse. The pair look relaxed as the tubes are placed into their arms 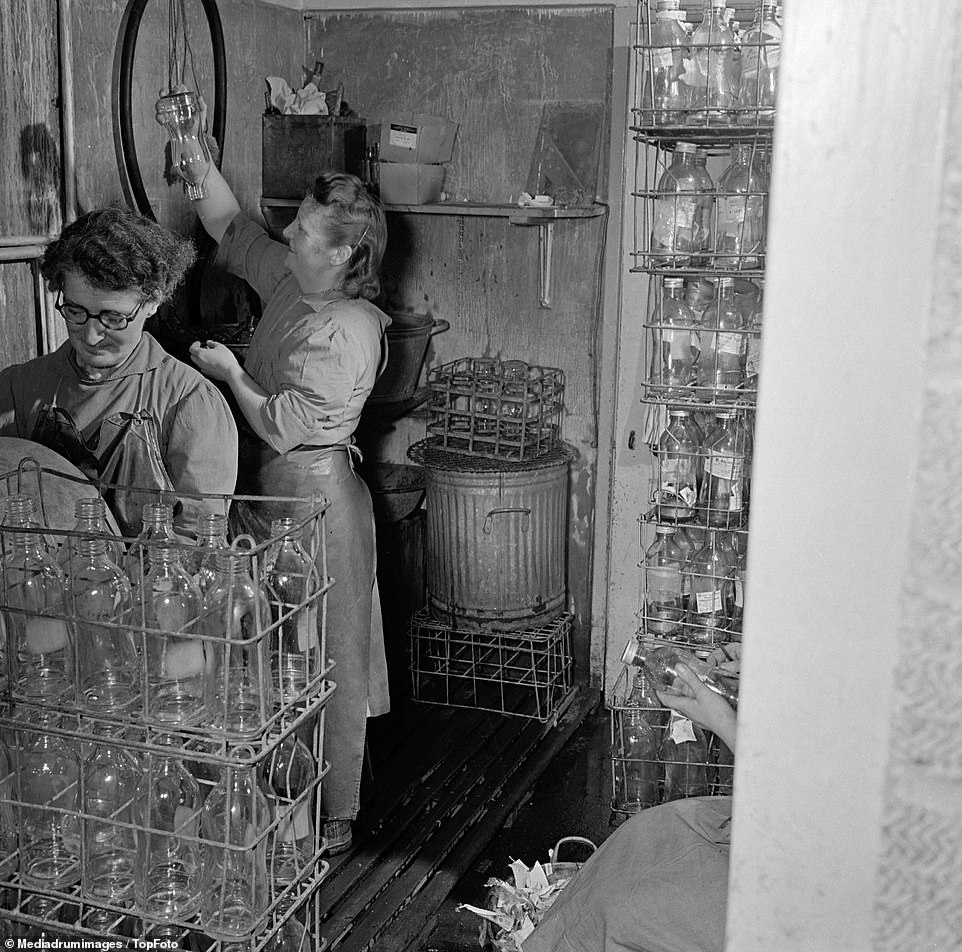