Fascinating color images from 120 years ago capture what life was really like in the Wild West and reveal the harsh reality of the Gold Rush-era.

Stunning color images dating from just before the turn of the 19th century depict a rugged cowboy brandishing a lasso, a thoughtful miner enjoying a smoke in the doorway of a dug-out cabin, and a pioneer merchant plying his wares from a ramshackle wooden shop.

Many of the photochroms were captured in Colorado during the 1880s and 1890s, where a gold rush in the 1850s drew crowds of hopeful prospectors looking to make their fortune.

Gold was first discovered in Colorado by a group of Cherokee on their way to California when they found flecks of the precious metal in a stream bed in the South Platte basin, near present-day Denver.

The knowledge of gold in the area remained unused for around a decade until it reached William Green Russell, a Georgian who was married to a Cherokee woman and had worked the California gold fields in the 1850s.

He sent an expedition party to the area and when word got back east, the Colorado Gold Rush was on, with thousands of prospectors flooding west shouting the slogan, ‘Pikes Peak or Bust’.

By the end of the century, the region was still almost completely lawless with outlaws and rustlers roaming around the plains.

Photochrom was invented in the 1880s and was most popular in the 1890s, when these images were taken.

This is a method of making colorized photographs from black and white negatives via the direct photographic transfer of a negative onto lithographic printing plates.

Although true color photography had been developed by then it was not commercially practical yet.

Grub’s up for these Wild West pioneers, eating beside their makeshift canteen. The Pike’s Peak Gold Rush sent many Americans into a frenzy, prompting them to pack up their belongings and head west to Colorado. These stunning color pictures were produced using a method called photochrom and depict the harsh reality of daily life during the Gold Rush-era 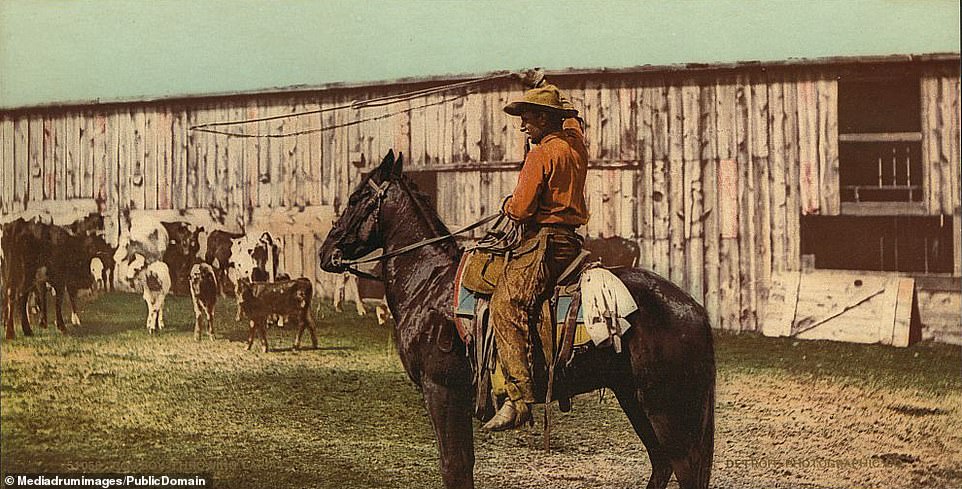 A talented cowboy swings his lasso. The cowboy became the symbol of the white settlers of the late 19th century, often depicted in popular culture as a glamorous or heroic figure. The reality was different and often they lead hard lives struggling to survive in the brutal wilderness of the plains and the lawless West 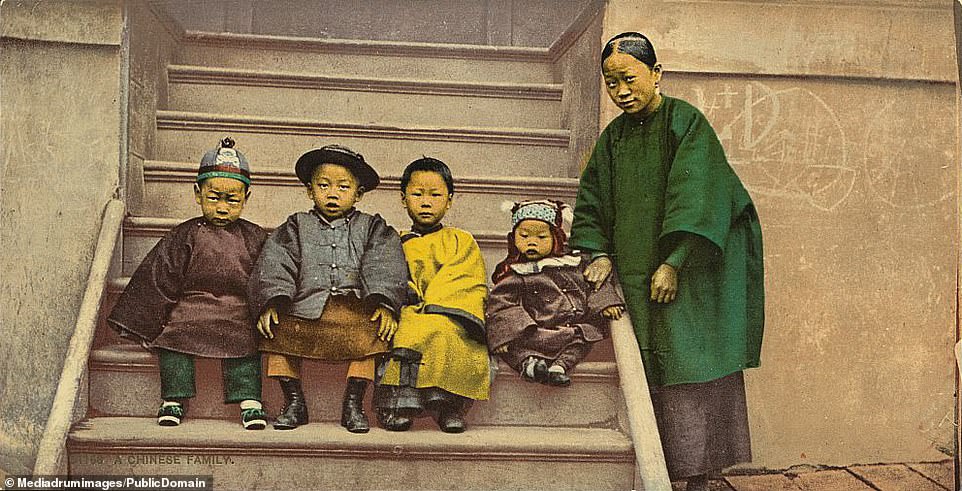 A Chinese family living in the Wild West. Many of the Chinese population immigrants who went to the US to work on building the groundbreaking railroads connecting the US East and West coasts. The railroads opened up the West for settlement and economic development as white settlers poured to the region 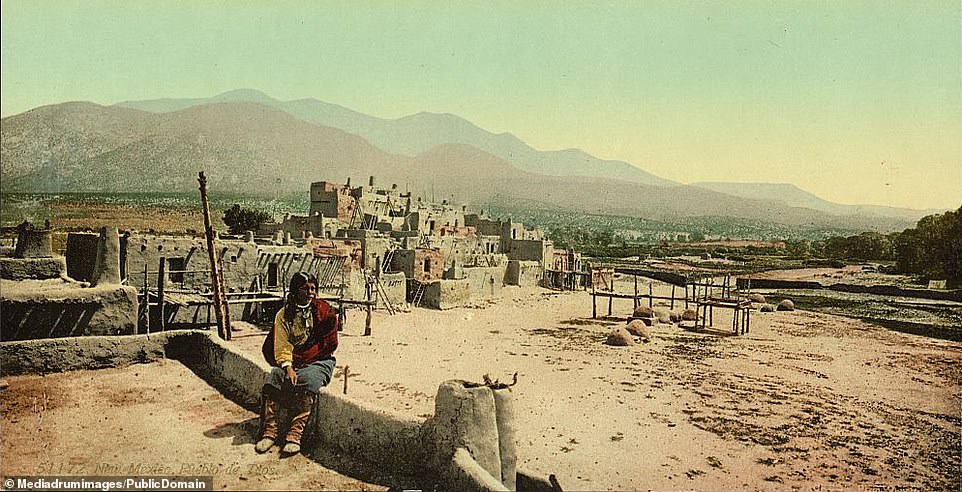 A member of the Pueblo de Taos Native American tribe. The indigenous population was often removed from their home land and forced on to reservations. In the conflicts that resulted these population shifts and the loss of the bison, the Native American, despite occasional victories, seemed doomed to defeat by the greater numbers of settlers and the military force of the US government 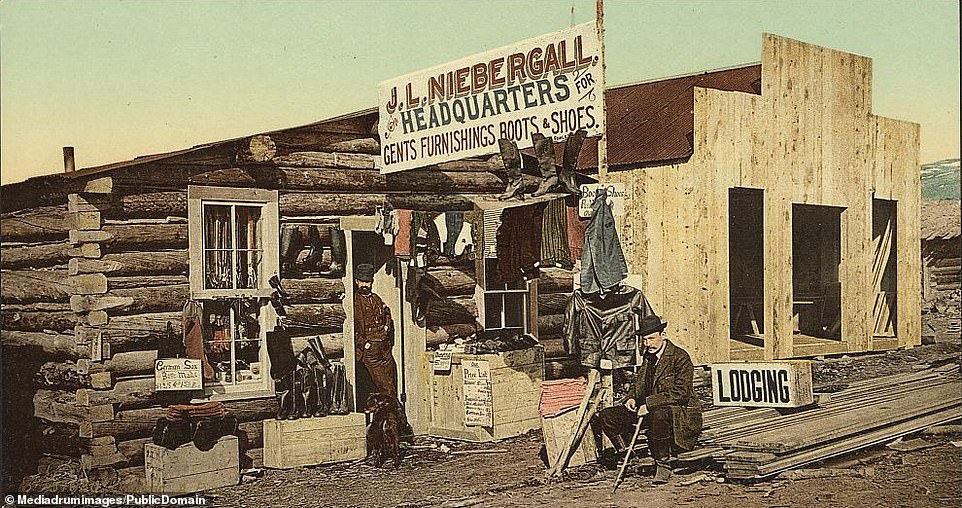 A pioneer merchant, selling whatever he could to whoever he could passing his ramshackle wooden cabin in Colorado. For those trying to earn a decent living, life was hard and most had to turn to physical labor such as mining, cattle herding, or fishing to make ends meet 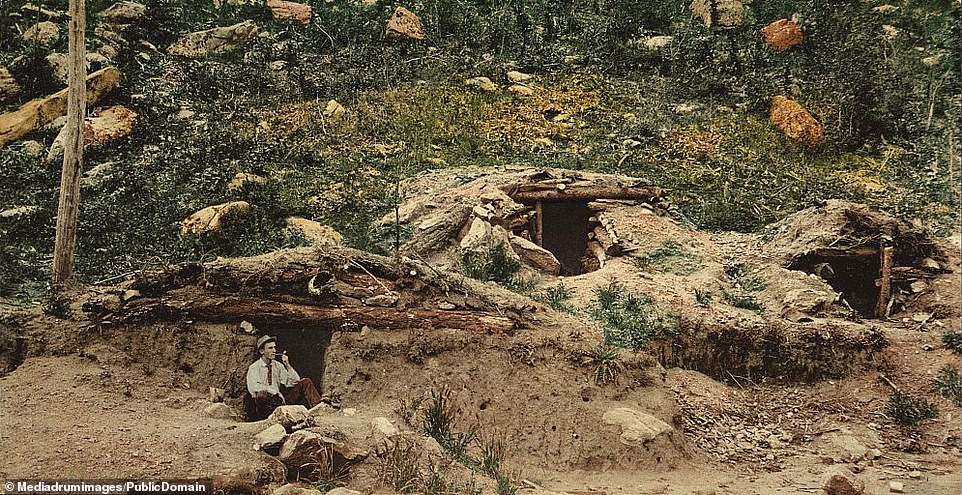 A miner enjoying a smoking break in the entrance to his dug-out rudimentary cabin in the Colorado mountains. African-American settlers also came West from the Deep South, convinced by promoters of all-black Western towns that prosperity could be found there 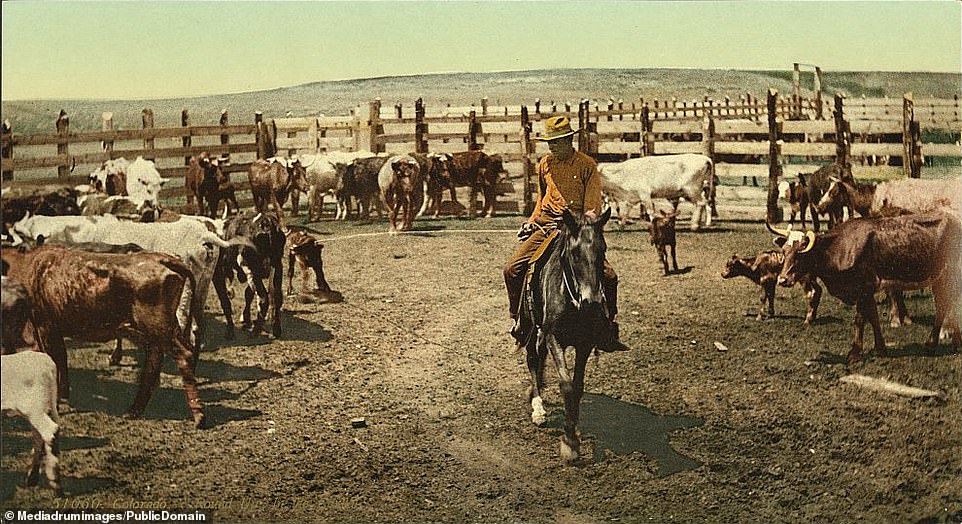 A cowboy rounding up his cattle on a Colorado ranch. Although the land was fertile and rich, it did not take long for the huge herds of American bison that dominated the plains to be wiped out, as their pelts and meats were hugely desirable and easy to come by. Much of Colorado was lawless with outlaws and rustlers roaming the territory

A blacksmith labors in the rugged landscape of the Colorado mountains. The railroads brought white settlers from the East who poured across the Mississippi to mine, farm, and ranch in the hope of making their fortunes. The rush created a few mining camps such as Denver City and Boulder City that would later develop into cities 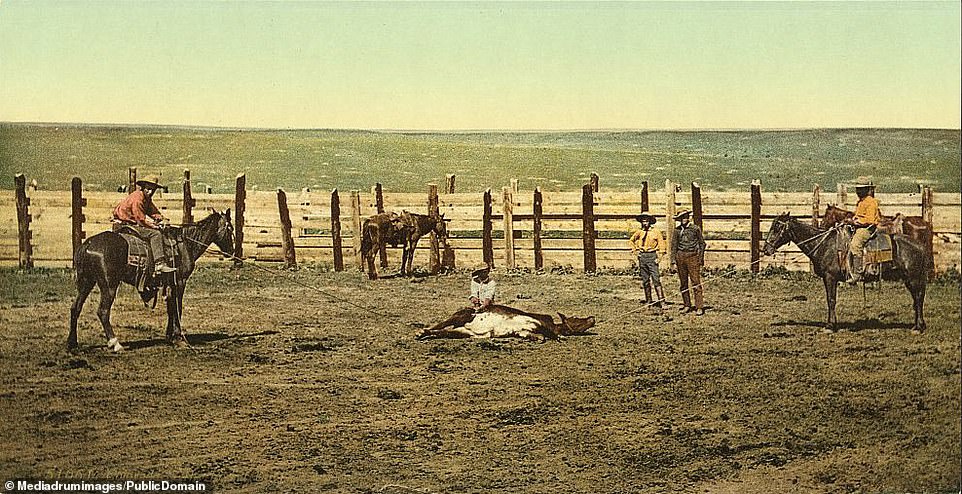 A steer being successfully rounded up, lassoed to the floor and slaughtered. The loss of the bison and growth of white settlement drastically affected the lives of the indigenous Americans living in the West. A significant proportion of cowboys were of Latin or Chinese descent and black cowboys were also not uncommon during the period 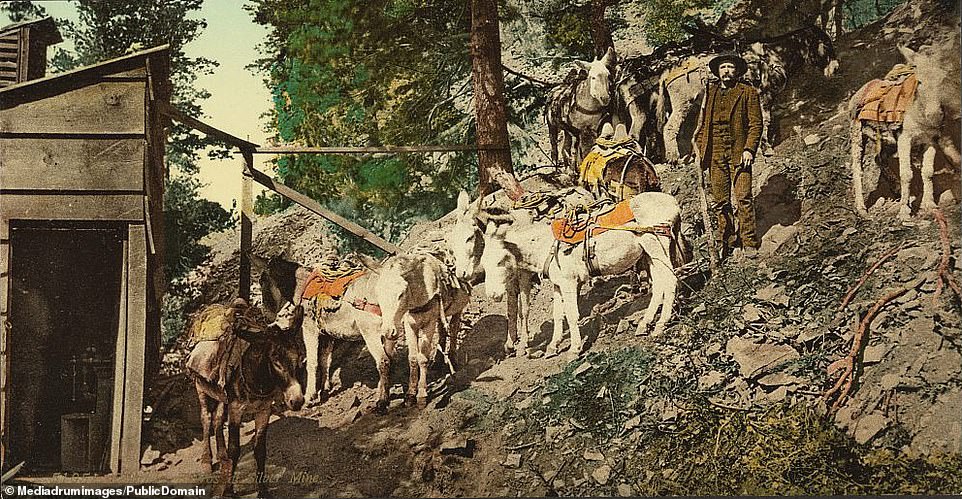 Loading up the donkeys with silver to carry it back to town. The life of the cowboy was far from glamorous, involving long, hard hours of labor, poor living conditions, and economic hardship. After losing decisive battles most of the Arapaho and Cheyenne tribes which lives in the areas affected by the rush were moved to a reservation in present-day Oklahoma 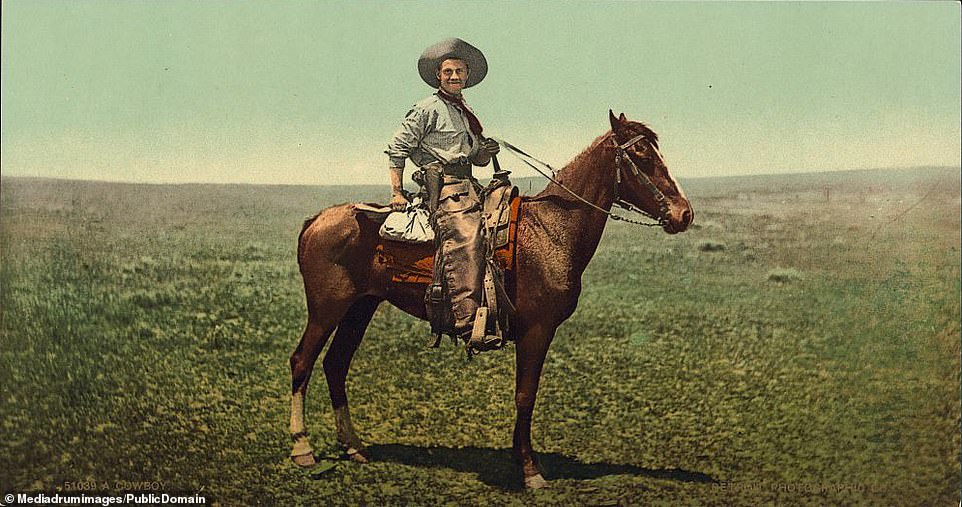 A cowboy brought to life in color by these photochroms. The life of a cattleman has been glamorized over the years with the reality very different from the one portrayed in films and TV. The Colorado Gold Rush is often referred to as the ‘Pikes Peak Gold Rush’ and lead to the creation of the Colorado Territory in 1861 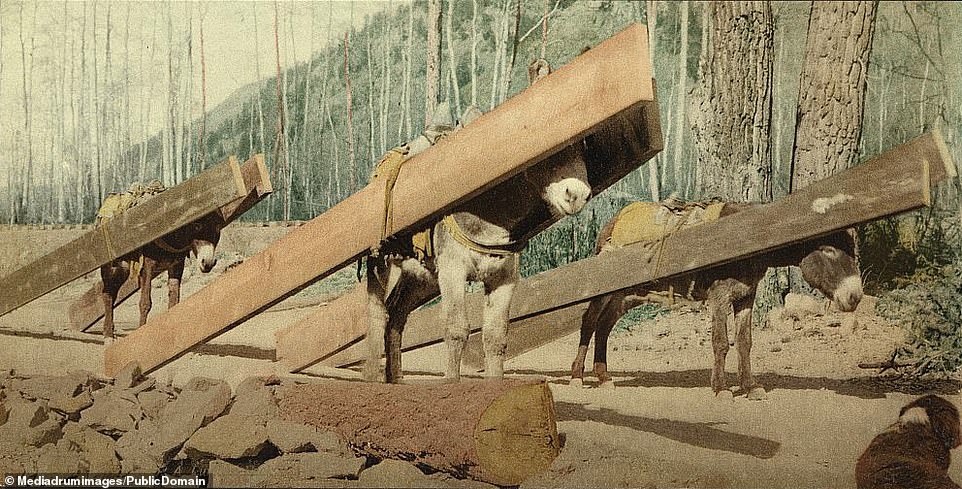 A pack of mules carrying lumber in Colorado. In 1859 the number of ’59ers’ as they became known peaked as they flooded to Colorado after the discovery of gold around a decade earlier. By the 1880s, most Native American had been confined to reservations, often in areas of the West that appeared least desirable to white settlers 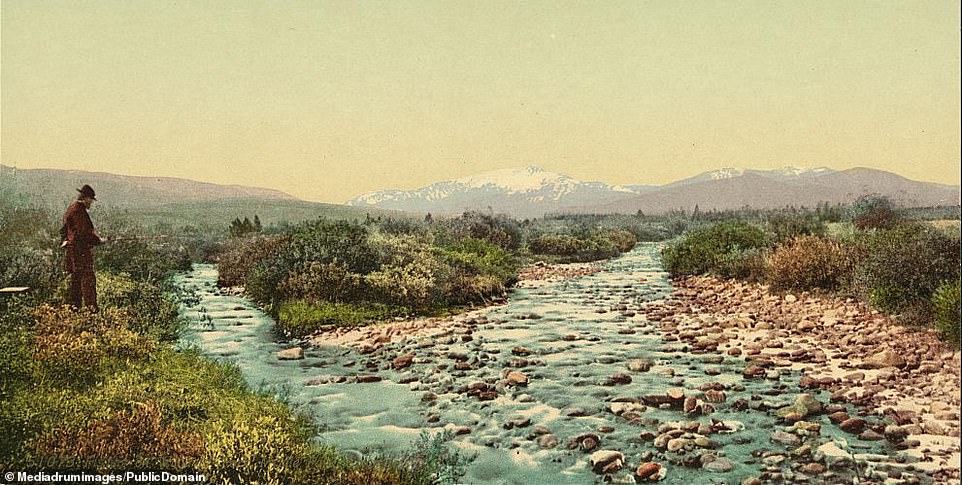 A man fishing on Williams’ Fork, Middle Park, in Colorado. Over 100,000 people participated in the Colorado Gold Rush rush and were known as ‘Fifty-Niners’, a reference to 1859, the year the rush to Colorado peaked. As many as 40,000 were thought to have made the journey at the height of the rush 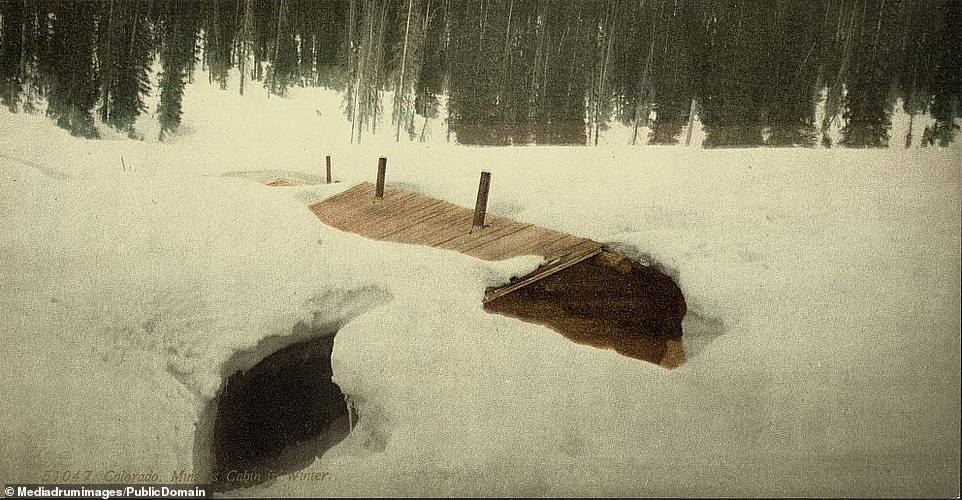 Conditions during the turn of the 19th century could often be brutal for the settlers and the indigenous population. Pictured is a miner’s cabin in winter covered in snow. After 1858 Anglo-Americans increasingly occupied the areas inhabited by the Plains Indians, killing buffalo, trampling grazing grass, and cutting down timber. Native Americans soon found their resource base dwindling, and some began raiding wagon trains for supplies or in hopes of scaring off other white immigrants 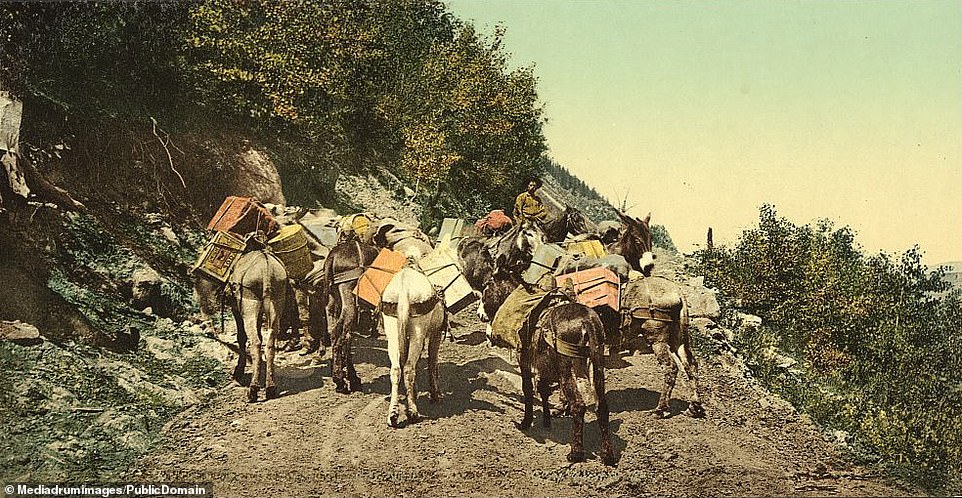 A pack train on a treacherous mountain road in the Colorado Rockies. Gold was first discovered by a group of Cherokee on their way to California over the Cherokee Trail when they found gold in a stream bed in the South Platte basin, near present-day Denver. The information remained unused for around a decade until it reached William Green Russell, a Georgian who was married to a Cherokee woman and had worked the California gold fields in the 1850s. He sent an exploration party to the area 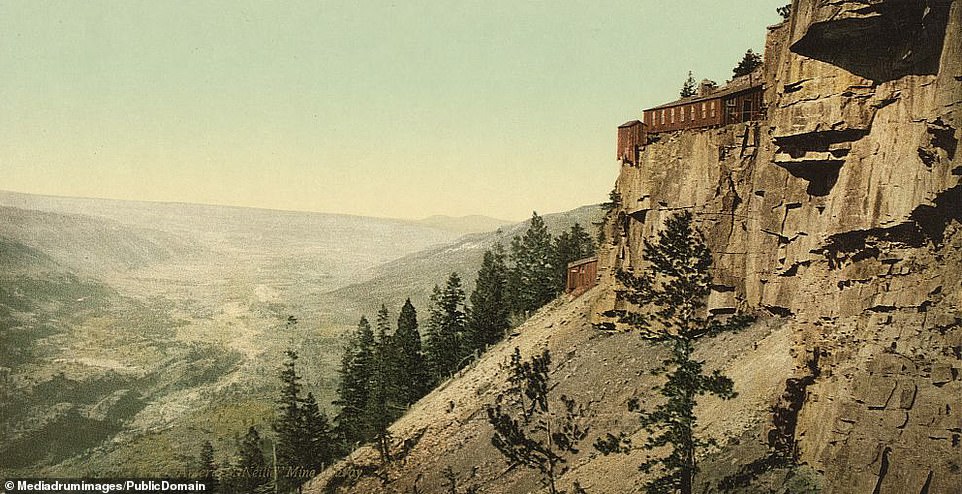 A mine in Colorado. Precious metals drew thousands of people to the West Coast during the 1850s. By 1859, large numbers of prospective miners and settlers had come up the Kansas River valley to the Denver area. At the time of the rush, Colorado was still part of Kansas and Nebraska territory