Rare images of the building of the US Transcontinental Railroad and the day the East and West sections united 150 years ago have gone on display in Salt Lake City, close to where it all happened.

A collection of photographs and rail memorabilia goes on show this month at the city’s Utah Museum of Fine Arts, on the University of Utah campus. It runs until May 26, in the month that marks the anniversary of the day the tracks from either end of the country met up 60 miles away at Promontory Summit, in the so-called meeting of the rails.

What the exhibition, The Race to Promontory: The Transcontinental Railroad and the American West, aims to convey is just how momentous a milestone a connected railway was for the nation.

East meets West: Chief engineers Samuel S. Montague and General Grenville M. Dodge of Central Pacific Railroad and Union Pacific Railroad, respectively, shake hands at the momentous meeting of the rails near at Promontory Summit, Utah, on May 10, 1869. The ceremony also spotlighted the meeting of Union Pacific locomotive No. 119 (on the right) and Central Pacific locomotive Jupiter 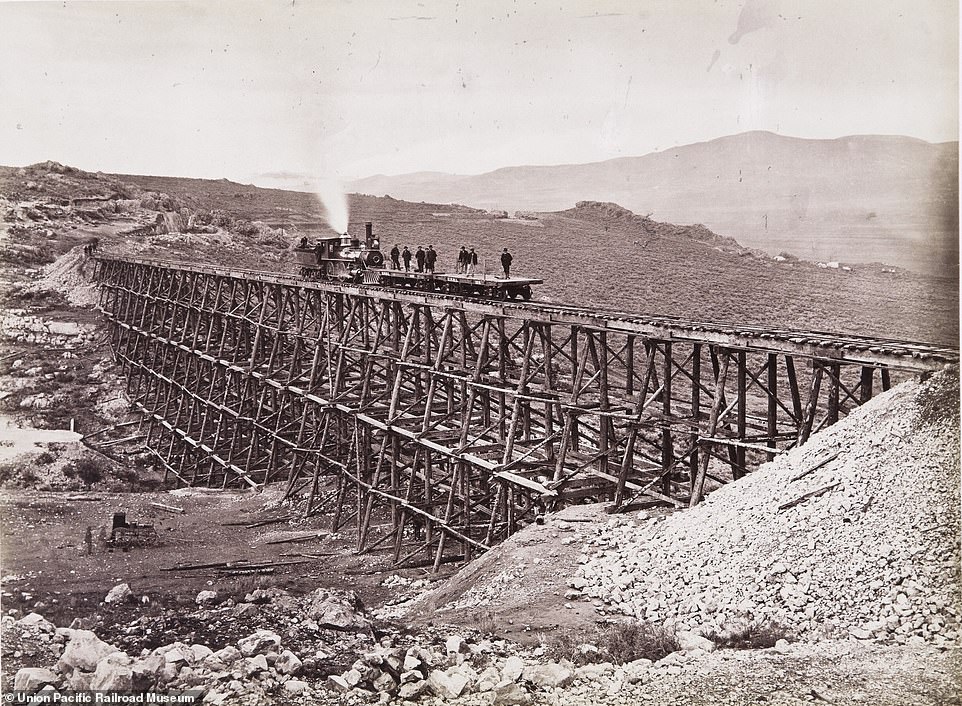 The United States: Promontory trestle work and engine No. 2 (above) were critical to challenges such as bridge building. The exhibition, The Race to Promontory: The Transcontinental Railroad and the American West, aims to convey how momentous a milestone a connected railway was for the nation 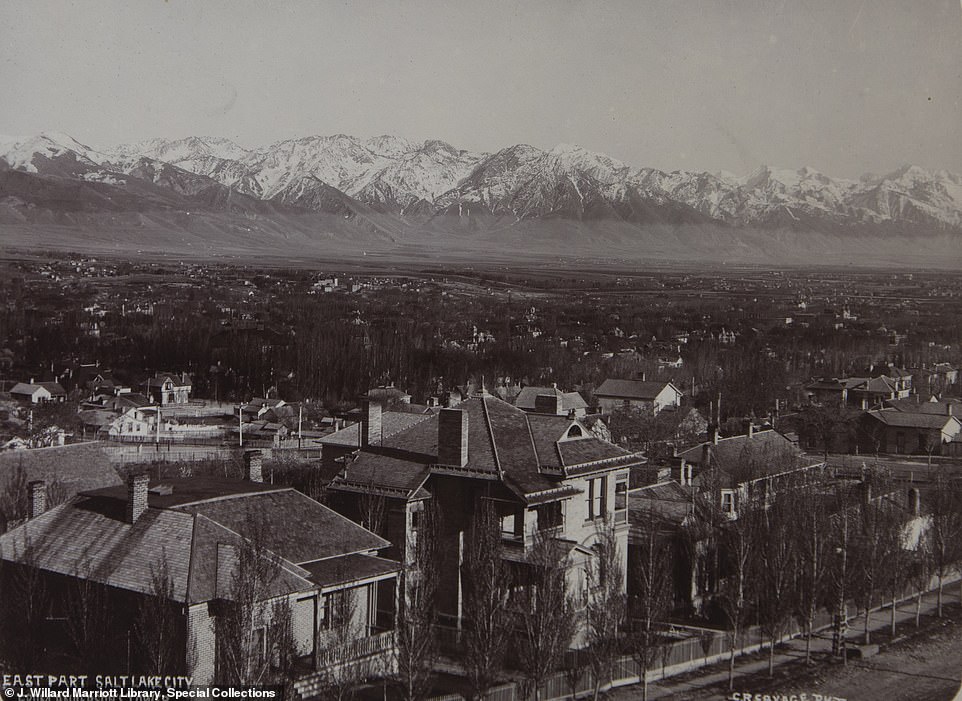 The peak of innovation: Salt Lake City (above) pictured in 1883 from Anderson’s Tower, lying in a mountain valley between the Wasatch and Oquirrh mountains. The city’s Utah Museum of Fine Arts is showcasing the work of contemporaneous photographers who were themselves pioneers of the art form, at that time, and runs until May when 150 years of the railroad is marked

Photographs and stereographs by Andrew J. Russell, Alfred A. Hart and Charles Savage mark an event celebrated nationally and internationally in 1869 which, for its time, was as groundbreaking as the first moon landing, a century later in 1969.

The meeting of the rails is also credited as being the first national news event, coast to coast.

Ingenious opportunists attached telegraph wires to a ceremonial spike which they tapped with a silver maul so that the strokes rang out across the country. 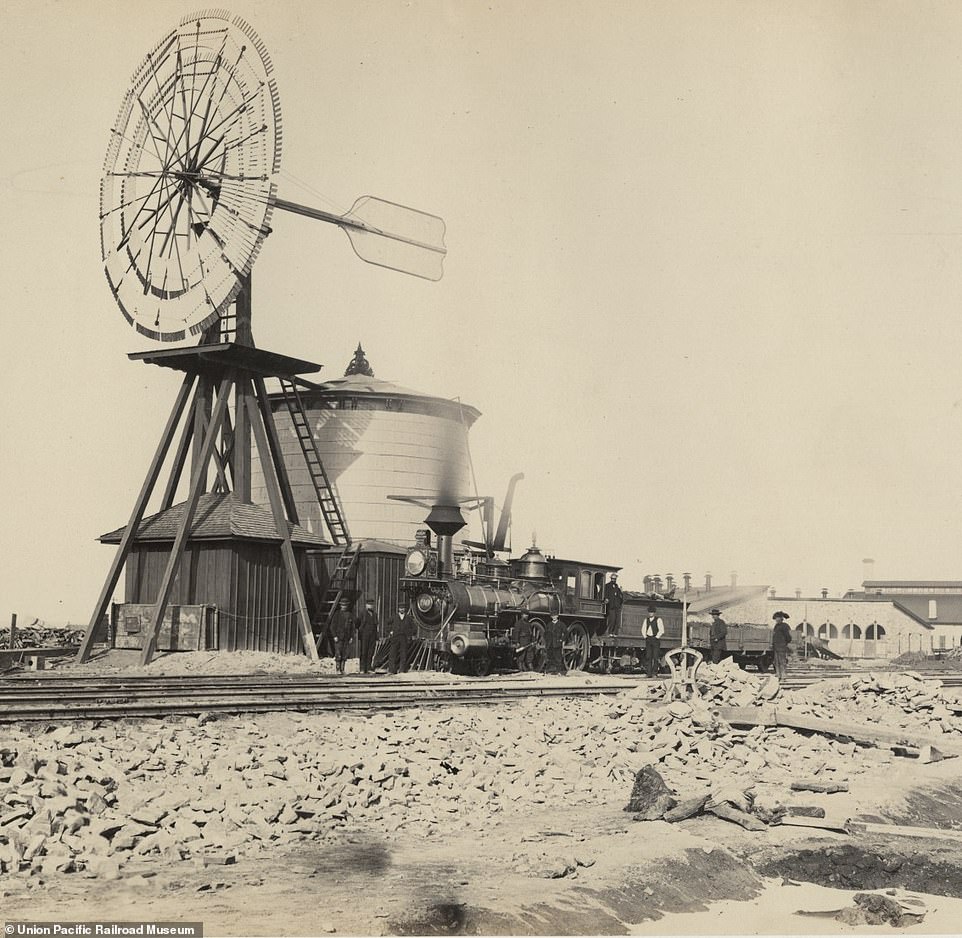 A bygone era: The wind mill at Laramie, Wyoming, in 1868 (above) illustrates the pre-Transcontinental Railroad landscape the year before the rail tracks from East and West connected and the US was to be forever transformed by migration, development and displaced communities, including the Native Americans

The regions responded in kind.

Whistles blew in San Francisco, the Liberty Bell rang in Philadelphia and the good people of Washington, DC, responded in a more sedate fashion by holding a ball.

The feat of engineering was symbolically pioneering and progressive. 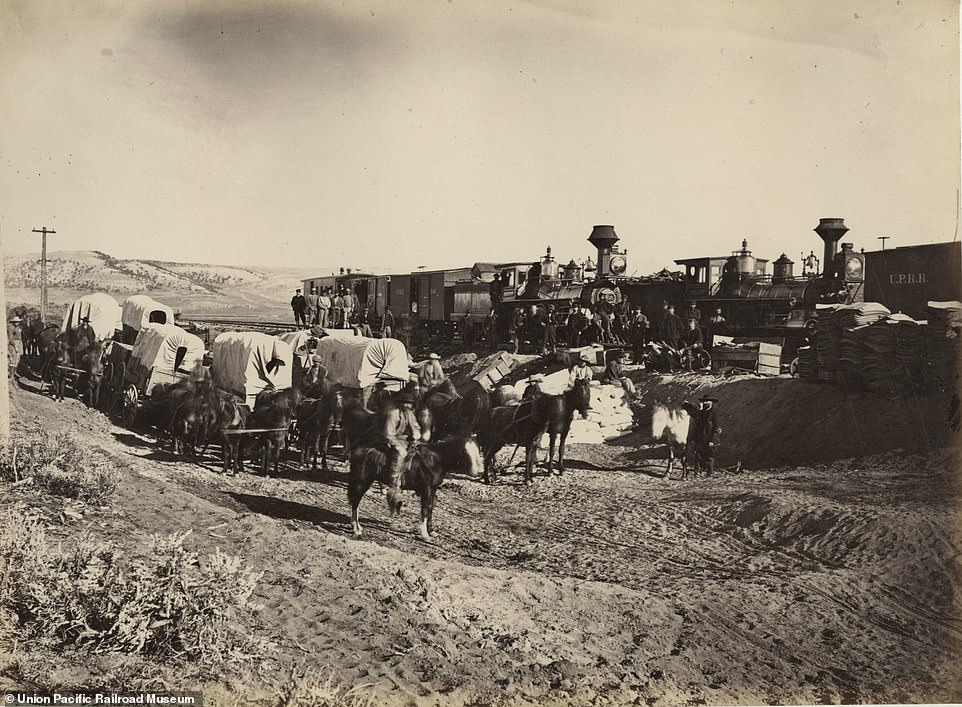 Do the locomotion: Promontory trestle work and engine No. 2 (above) as captured by Russell in 1869. The railroad is shown in stark contrast to its precursor, the traditional horse and cart, in this albumen silver print, on loan from the Union Pacific Railroad Museum to the Utah Museum of Fine Arts. The arrival of the railroad was to herald the end of the concept of the frontier 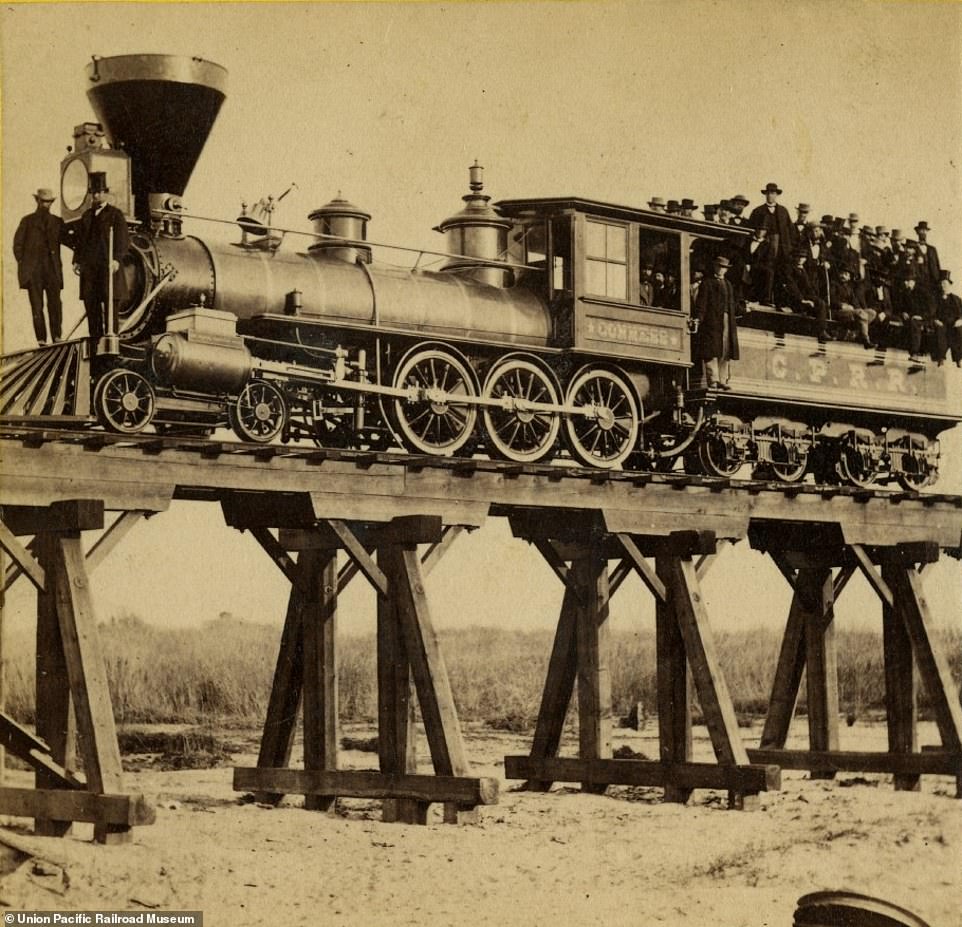 A locomotive near the American River, California, is packed full of Central Pacific Railroad staff. This image dates to 1865, the year that the American Civil War had ended having attempted to settle the disputes between the North and South. The joining of the rail tracks four years later would signal a significant uniting of the West and East coasts of the United States 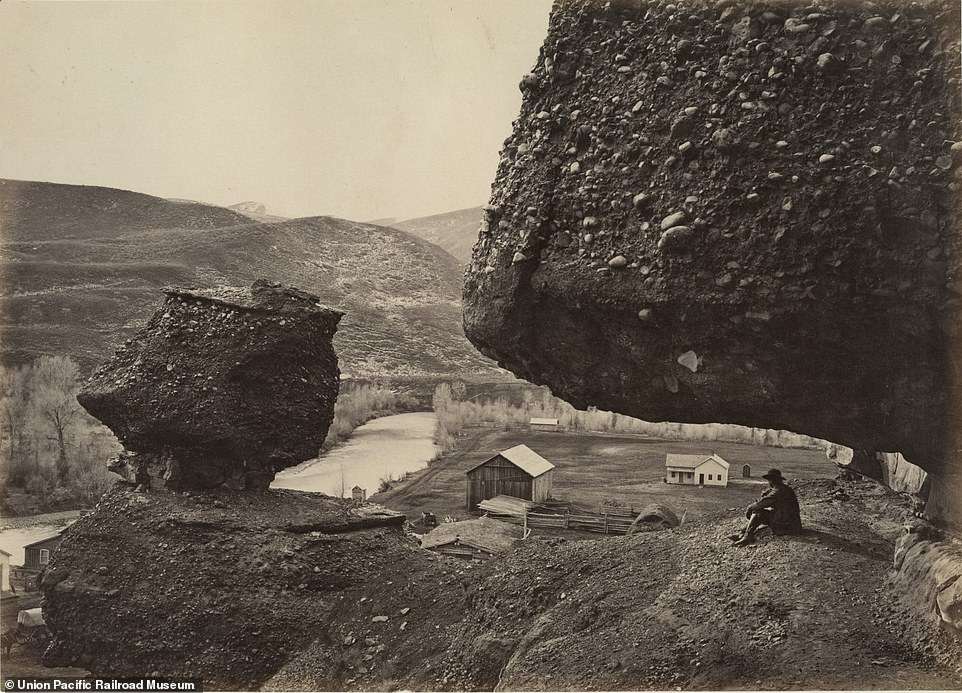 Forbidding landscape: A hanging rock in 1868 at the foot of Echo Canon (above) is among staggering scenery in Utah where the West and East coast rail tracks were to join up a year later. Photographs and stereographs by Andrew J. Russell, Alfred A. Hart and Charles Savage mark an event celebrated nationally and internationally in 1869 which, for its time, was as groundbreaking as the first moon landing, a century later in 1969

The railroad was completed shortly after the American Civil War ended.

The war aimed to settle the issues of central over regional government rule and the rights of slaves, while the joined up Transcontinental Railroad further heralded the era of a more united country.

If the Civil War between 1861 and 1865 attempted to put to bed the political divide between the North and the South, then the meeting of the rails united East and West. 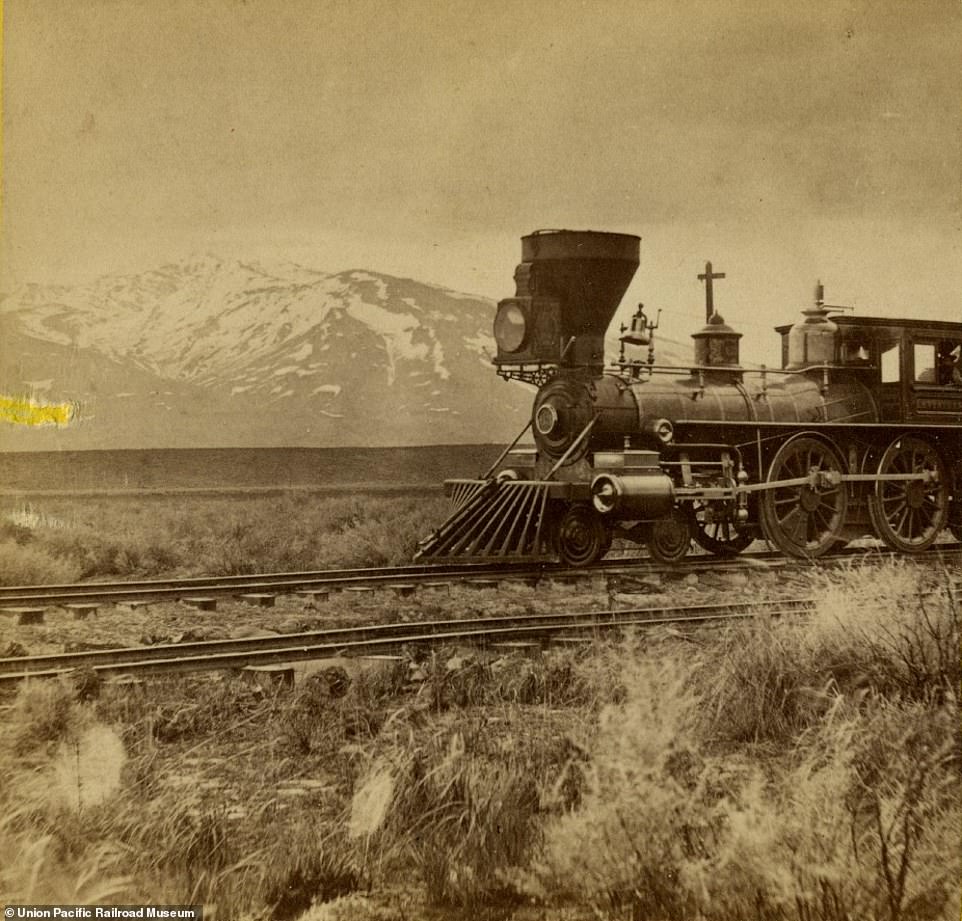 On the right tracks: The scene in 1869 near Deeth, California, with Mount Halleck in the background. This image was taken by Hart, one of three pioneering photographers whose work documents the almost four-year feat of engineering. The meeting of the rails is credited as being the first national news event, coast to coast. Ingenious opportunists attached telegraph wires to a ceremonial spike which they tapped with a silver maul so that the strokes rang out across the country 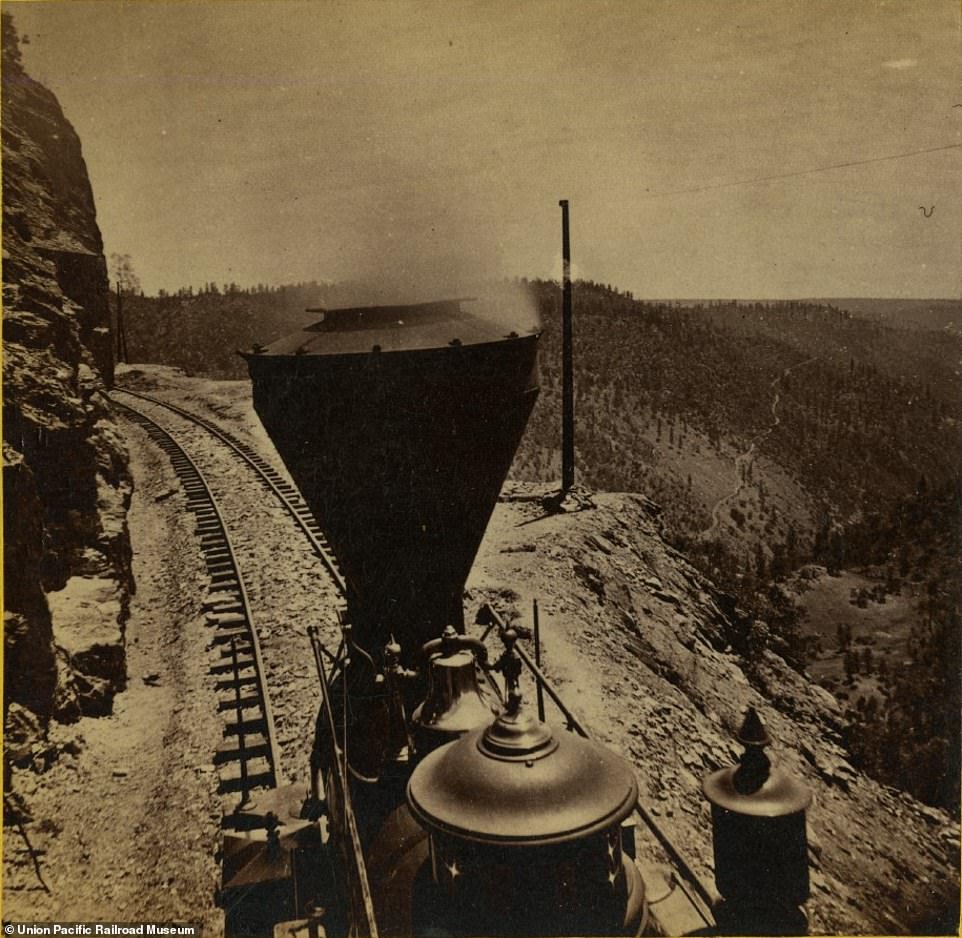 Engine room: The train driver’s perspective as a locomotive circumnavigates Cape Horn en route to Iowa Hill, California (above), in 1866. It shows one of the earlier parts of track laid by predominantly Chinese workers from Central Pacific Railroad 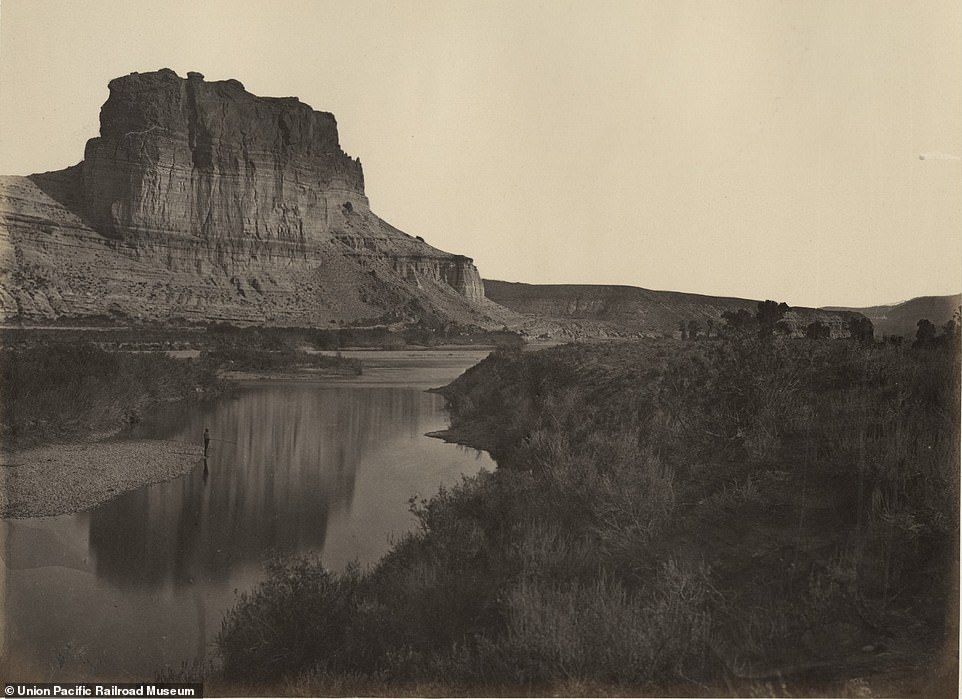 Breathtaking backdrop: Castle Rock, Green River Valley (above), is among the sights Transcontinental users came to enjoy. This image was taken in 1868 by Russell who joins Hart and Savage as the pioneering triumvirate that capitalised on another emerging innovation, photography

As in the aftermath of any war, generous government investment became available to rebuild the infrastructure, and the Transcontinental Railroad was among the projects to benefit from the windfall.

Members of the Church of Latter-Day Saints worked alongside them. 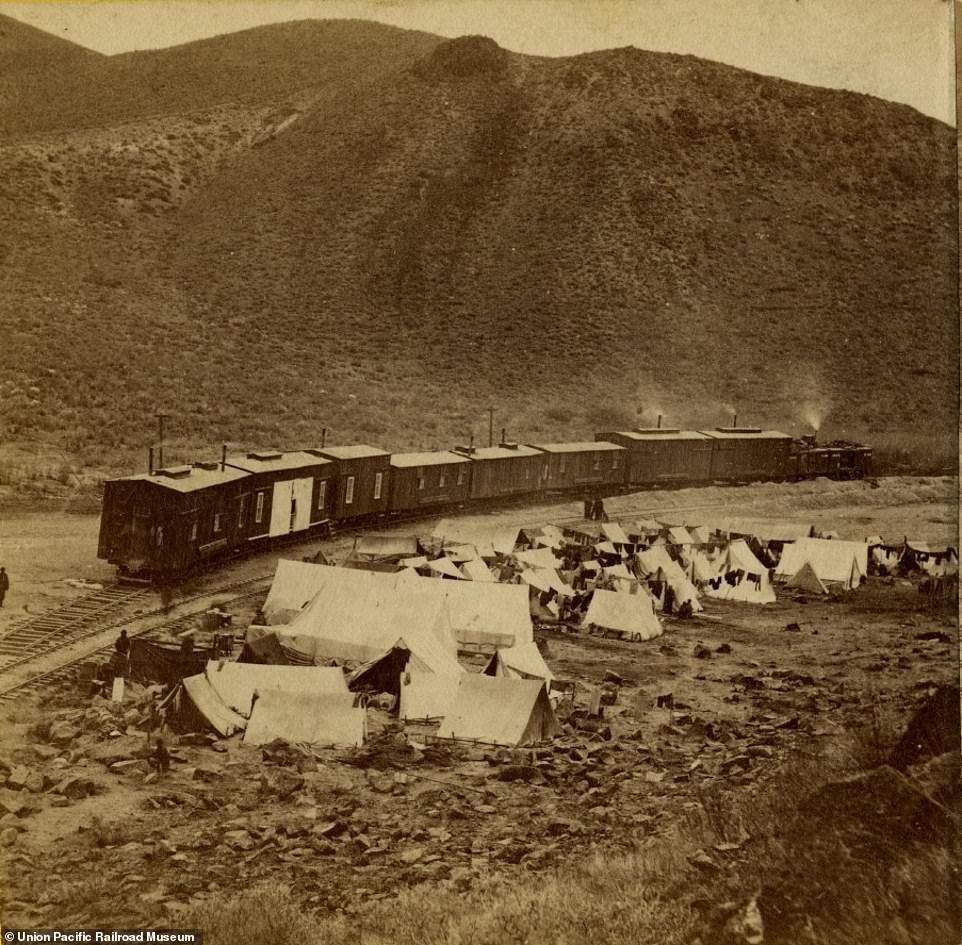 Hart captures the camp at the so-called end of the track where Chinese workers for the Central Pacific Railroad stayed (above), in 1868. The workforce were responsible for building the line from California East towards Utah where it joined up with the Union Pacific Railroad component built by Irish immigrants from East to West 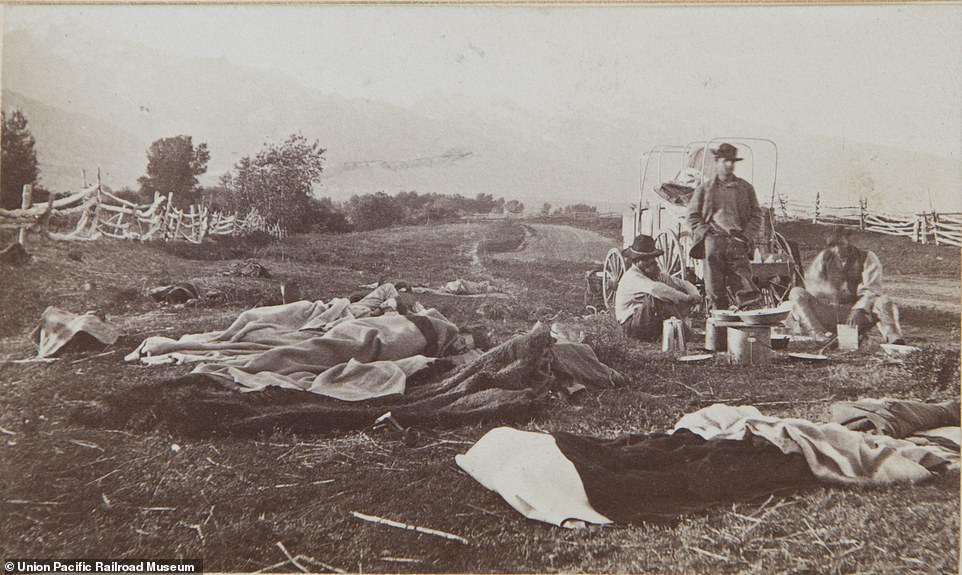 No mod cons: Rail workers in Laramie, Wyoming (above), forsook creature comforts to help build the 1,912-mile railroad. This image taken by Russell in 1868 shows the sacrifices made by the men who worked on the project for 46 months. Completion of the line led to national celebration. Whistles blew in San Francisco, the Liberty Bell rang in Philadelphia and the good people of Washington, DC, responded in a more sedate fashion by holding a ball

It took this international workforce 46 months of endeavour before tracks from either side of the country could be laid from end-to-end.

This revolutionised travel for US inhabitants. The rail journey from New York to San Francisco, which once took six months, now took only ten days. 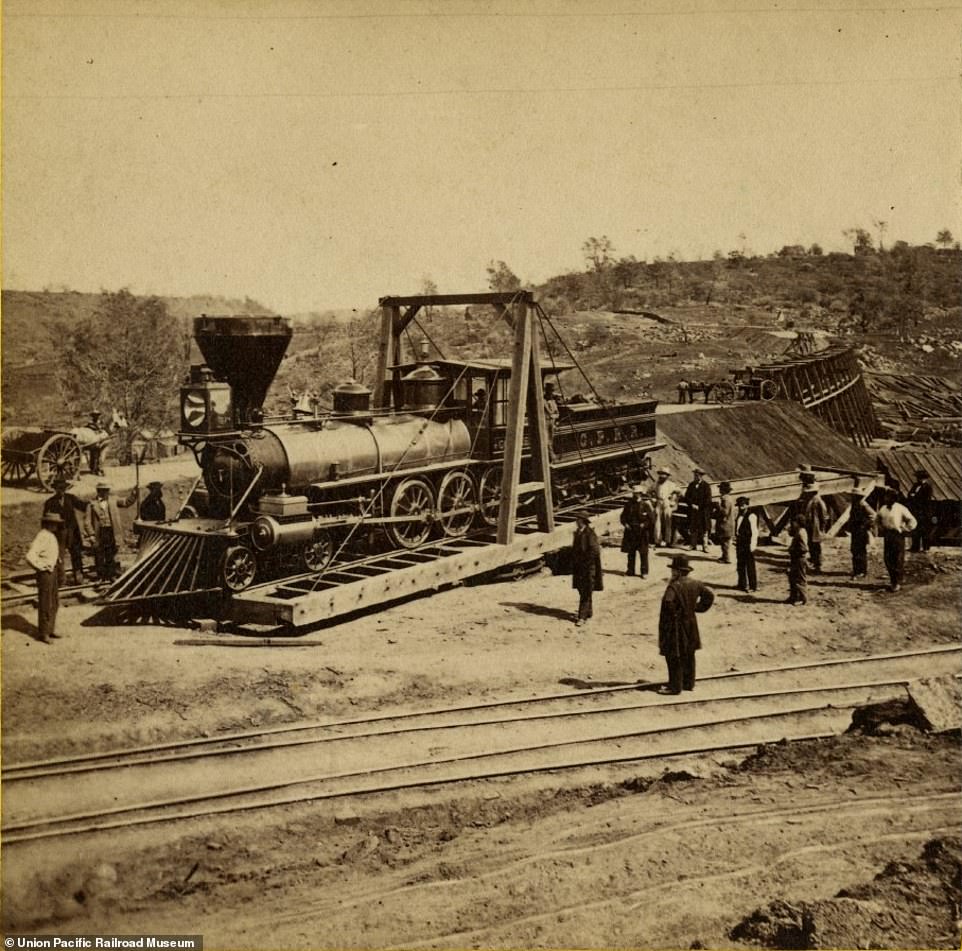 Feat of engineering: A locomotive on a turntable in California (above) in 1865. This device was critical to Central Pacific Railroad’s ambitious plans to lay the track from the West Coast towards Utah. The connection cut journey times from New York to San Francisco from six months to ten days

Very few members of the population were unaffected by the development.

The lives of Native Americans were forever changed.

New migration spurred by the railroad hastened the end of the Indian Wars and the beginning of the reservation era. 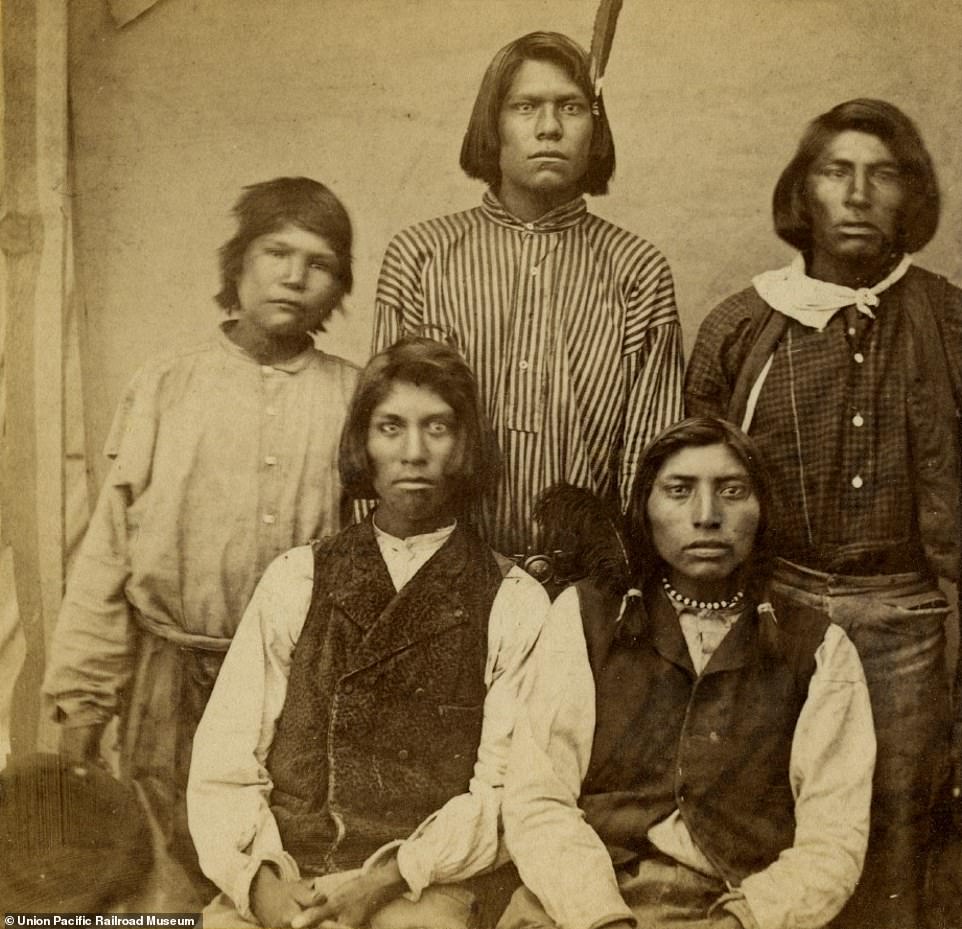 Paiute Indians in Reno (above) were among the communities whose lives were changed by railroad-led migration. This image was taken in 1868 before new migration spurred by the railroad hastened the end of the Indian Wars and the beginning of the reservation era 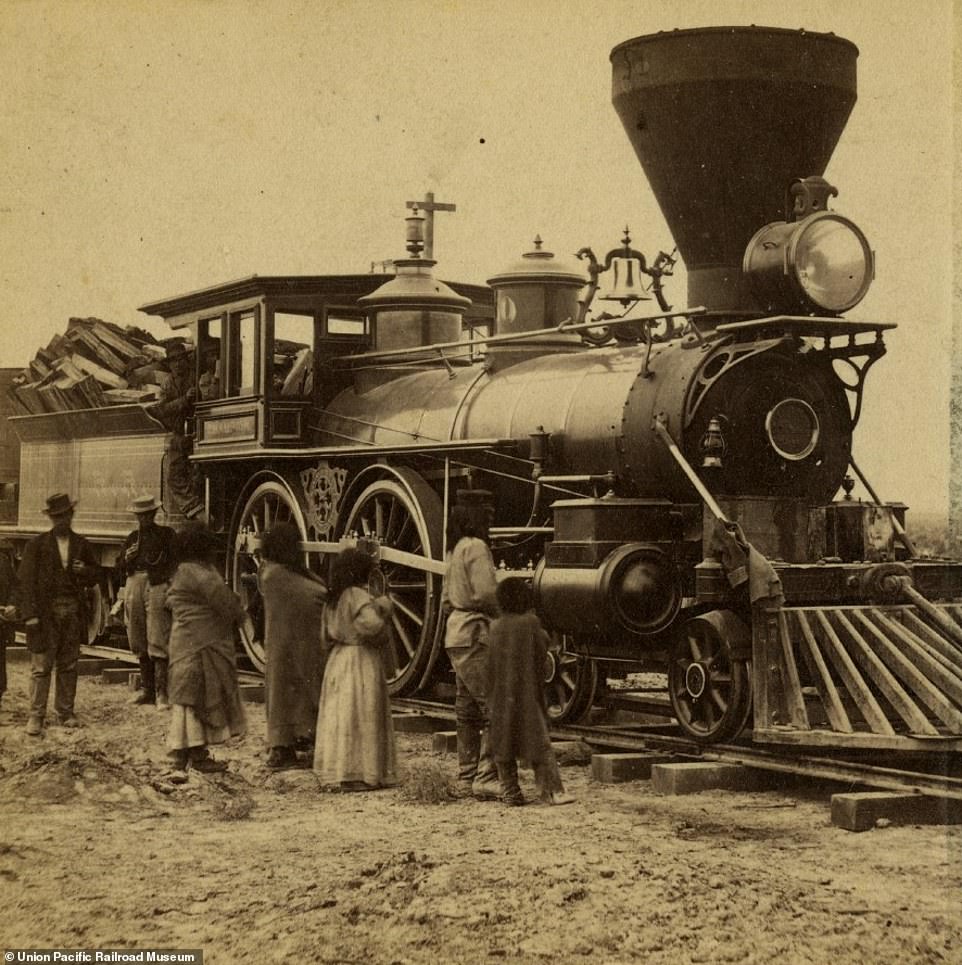 Cultural revolution: Shoshone Indians scrutinising the locomotives whose arrival marked the end of their traditional lifestyle. This image is dated to 1868. The railroad led to developments such as mail cars and telegraph wires, which assisted communication throughout the country

The connectivity facilitated mass migration from one part of the country to another.

It also created a method to transport produce grown nationally or imported from abroad, including tea from Japan and opened up opportunities for commuting.

Mail cars and telegraph wires assisted communication throughout the country. 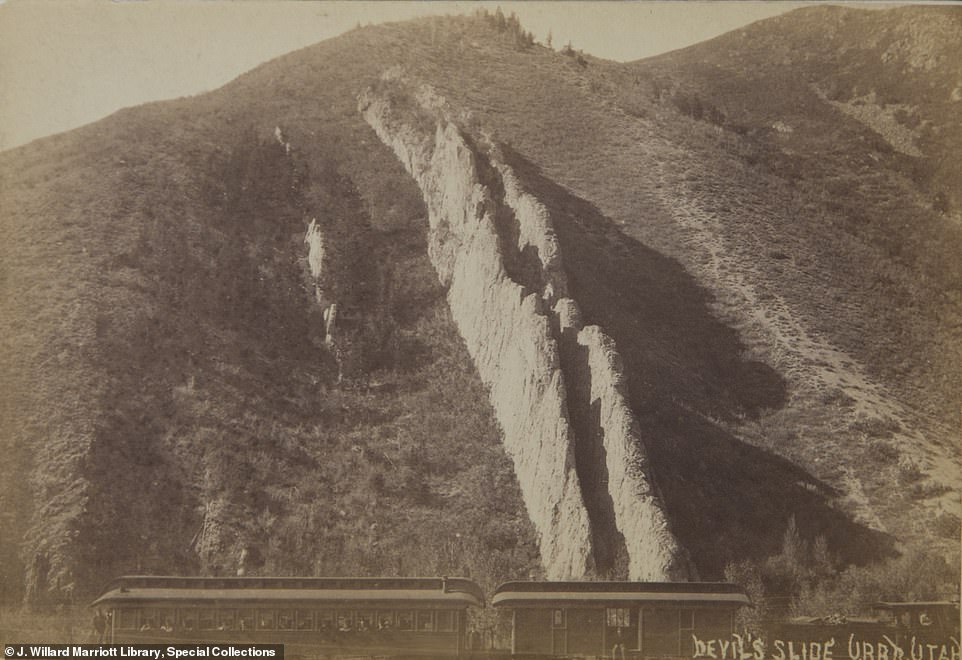 Hell of a ride: The evocatively named Devil’s Slide, Utah (above), is among the jaw-dropping scenery rail users came to enjoy. The exact date of the image is not known, but it’s thought to be between 1870 and 1875. Members of the Church of Latter-Day Saints also worked on the construction 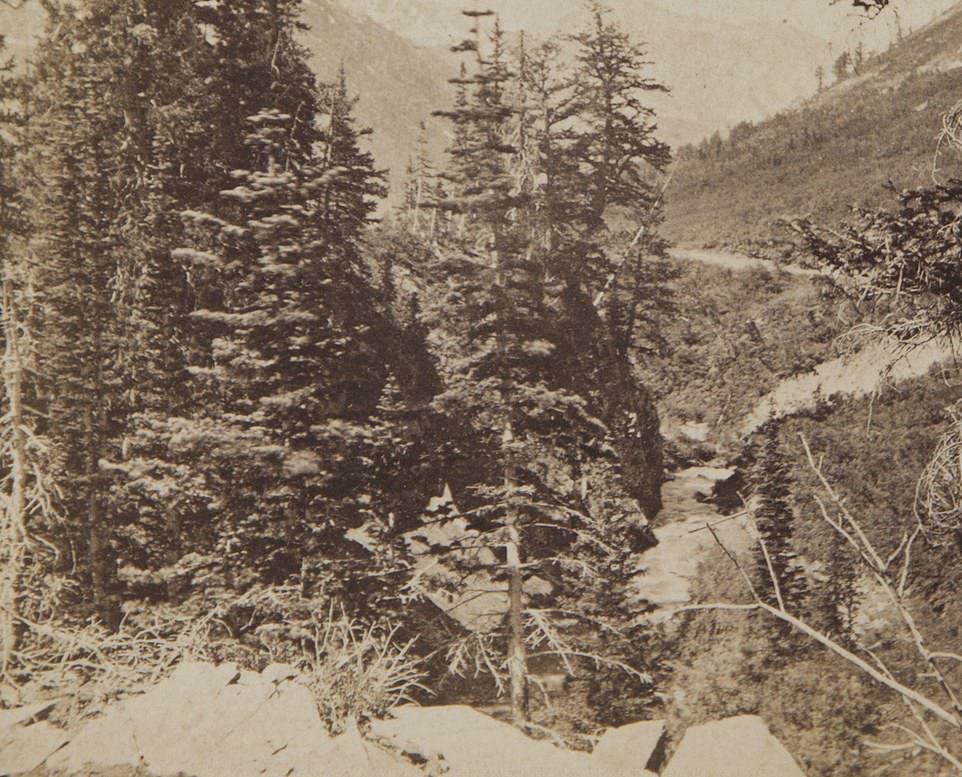 Trail of the lonesome pine: Passengers were treated to spectacular scenery (above) once the US coasts were united

The art of photography, emergent as it was in the 1860s, is as celebrated in the exhibition as the construction event it documents.

It features 50 framed imperial albumen prints by Russell and 108 stereograph cards by Hart as well as Savage’s shots.

Other artefacts include rail spikes and train company documents. The Joslyn Art Museum and Union Pacific, both in Omaha, Nebraska, and the Union Pacific Railroad Museum, Council Bluffs, Iowa, have lent items from their respective collections. 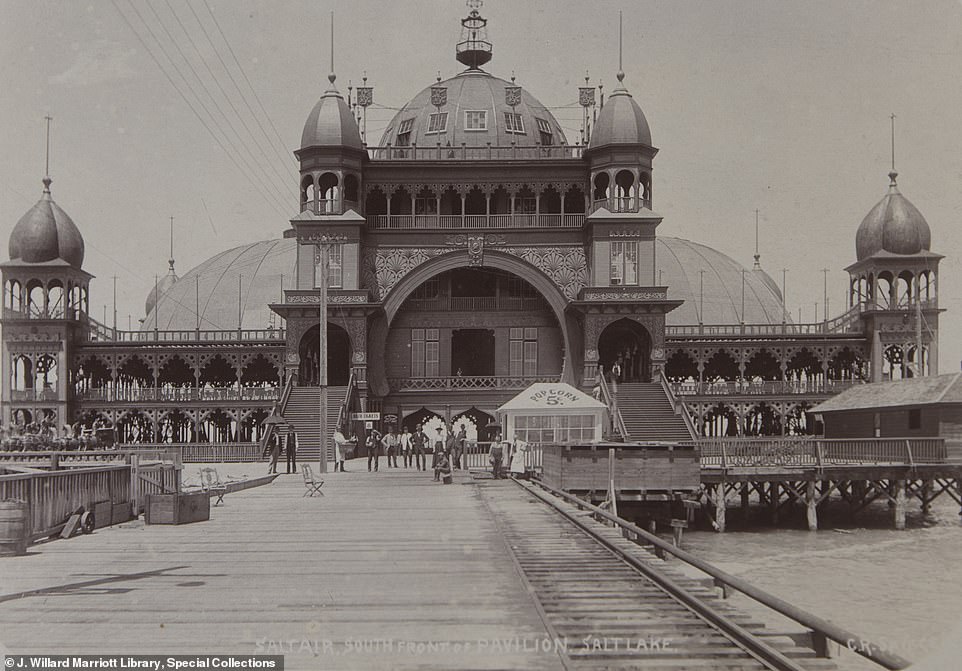 Another era: Savage captures the old school charm of the Saltair Pavilion (above), just outside Salt Lake City, in 1892. Sadly, it burnt down in 1925 This image by Savage is of Brigham Young, the founder of Salt Lake City and the first governor of Utah. The date of this picture is not known