Oh we did like to be beside the seaside! Fascinating photos offer glimpse into holidays of yesteryear as workers hurry to get Brighton Pier ready in the 1950s

Stunning photos show preparations on Brighton Pier for the 1952 summer and Easter holidays.

Snapped in March that year, the shots show dozens of people beavering away to get the iconic pier and whole town ready.

The evocative pictures show one engineer tucked away inside a jukebox making delicate last-minute repairs, bold painters risking life and limb to repair the town’s iconic pier, and deckchair attendants ensuring their loungers were in good working order.

Brighton pier was stripped of its boards in some places after fears the German’s would use it for an invasion in the second world war. (Pictured) A man helps hammer wooden boards back onto the pier next to a covered area of the pier 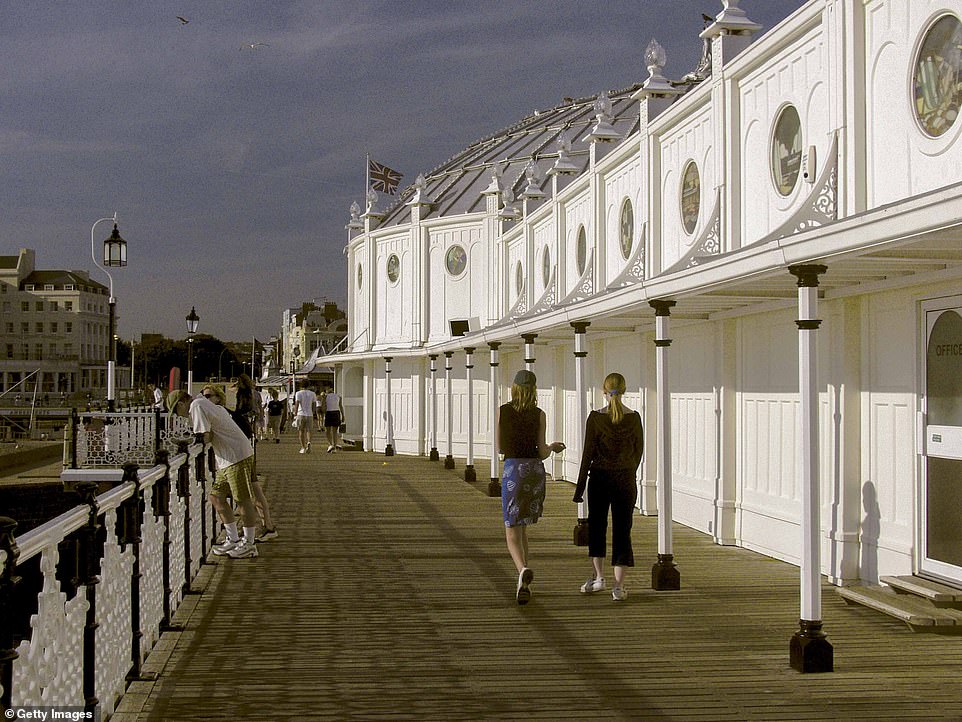 The pier is still in use today as Brighton’s main pleasure pier. The same barriers are also still in place 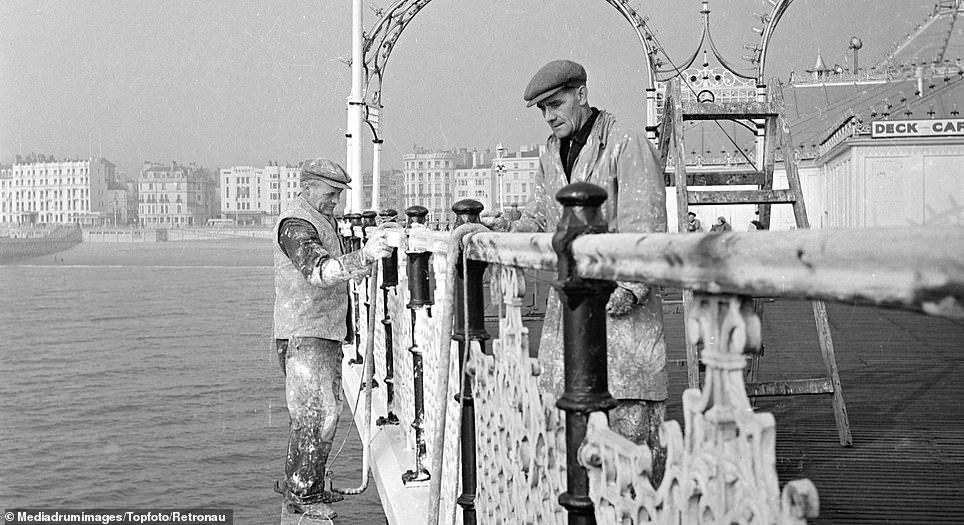 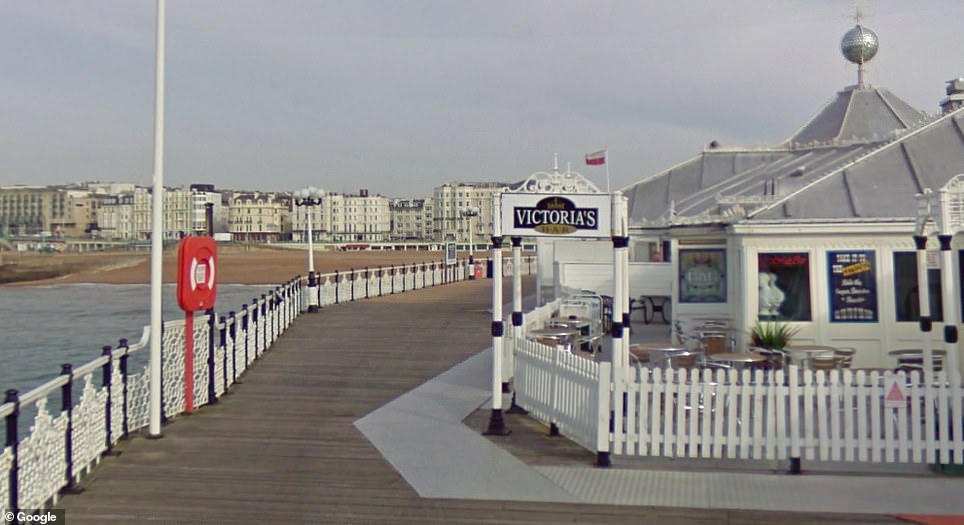 A brave man hangs over the side of the Pier and stands on a piece of wood painting it, while another stays on the ‘safe side’. Amazingly, the barriers are still the same style today as they were in 1952. The building on the pier labelled ‘Deck Cafe’ is also still there, as are some of the houses on the seafront. (Pictured right) The same area of the pier pictured today 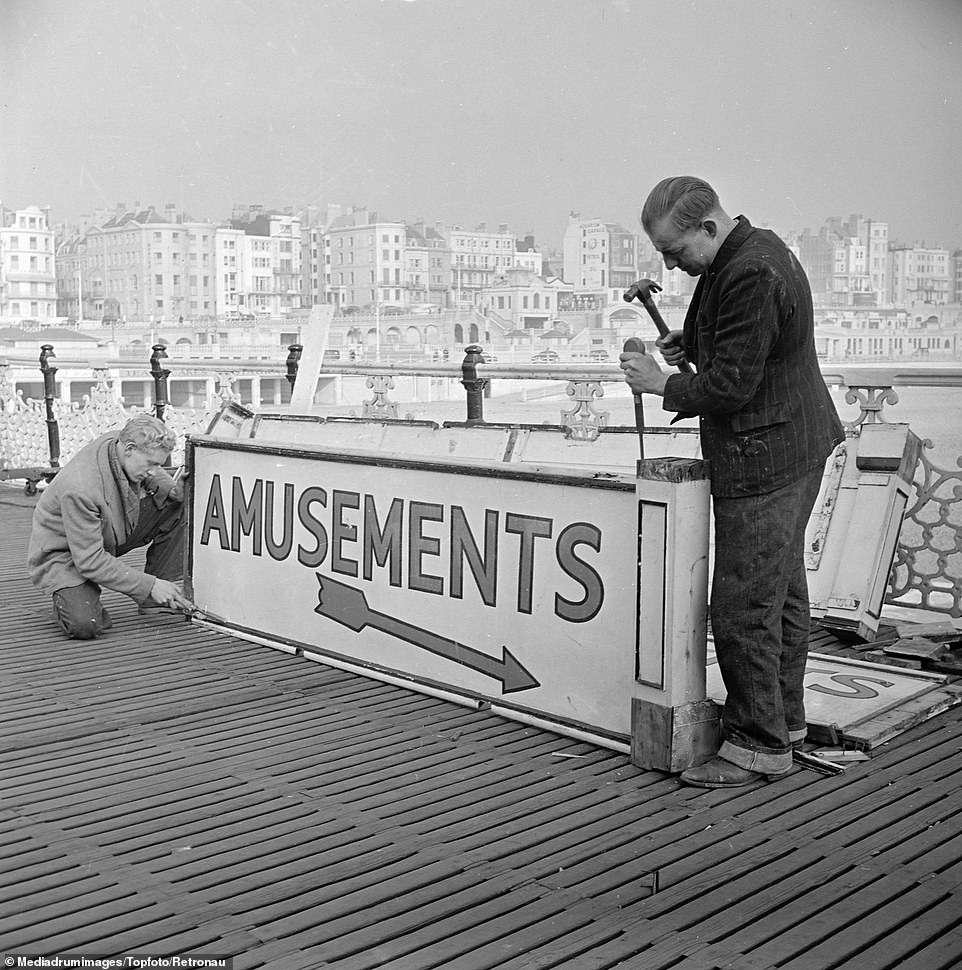 This sign for the arcades is one of several being repaired by these two men in preparation for the holiday season. Brighton’s arcades are famous, with many people enjoying the chance to spend one and two pence coins

Another set of lip-smacking photos show workers creating the legendary ‘Brighton Rock’ – a must have for tourists young and old alike on their visit to the coast.

The remarkable photos evoke memories of donkey rides on the beach, greasy fish and chips on a bench facing the sea, and gaudy Punch and Judy shows drawing crowds along the promenade – perhaps a product of their time.

In 1952, Brighton like much of the country was still getting back on its feet after the war and the Pier Pavilion was starting to look back to its best. Just a few years previously it had been stripped of all its boardwalks as there had been mounting fears the Germans may have used it as a landing platform. 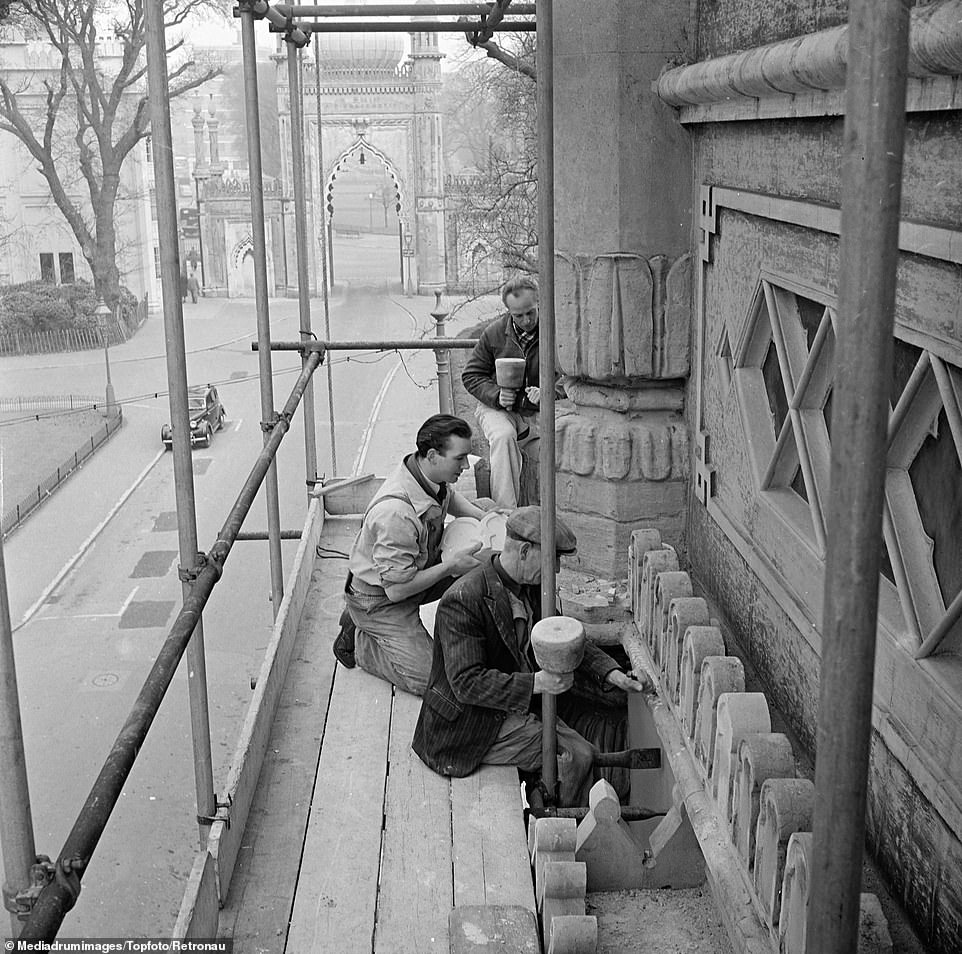 Stonemasons help make the town look its best in time for the upcoming holiday season. Behind them former royal residence Brighton Pavilion’s archway can be seen. It was built in an Indian-style after George IV asked architect John Nash to help him transform Brighton’s Marine Pavilion into a larger royal residence 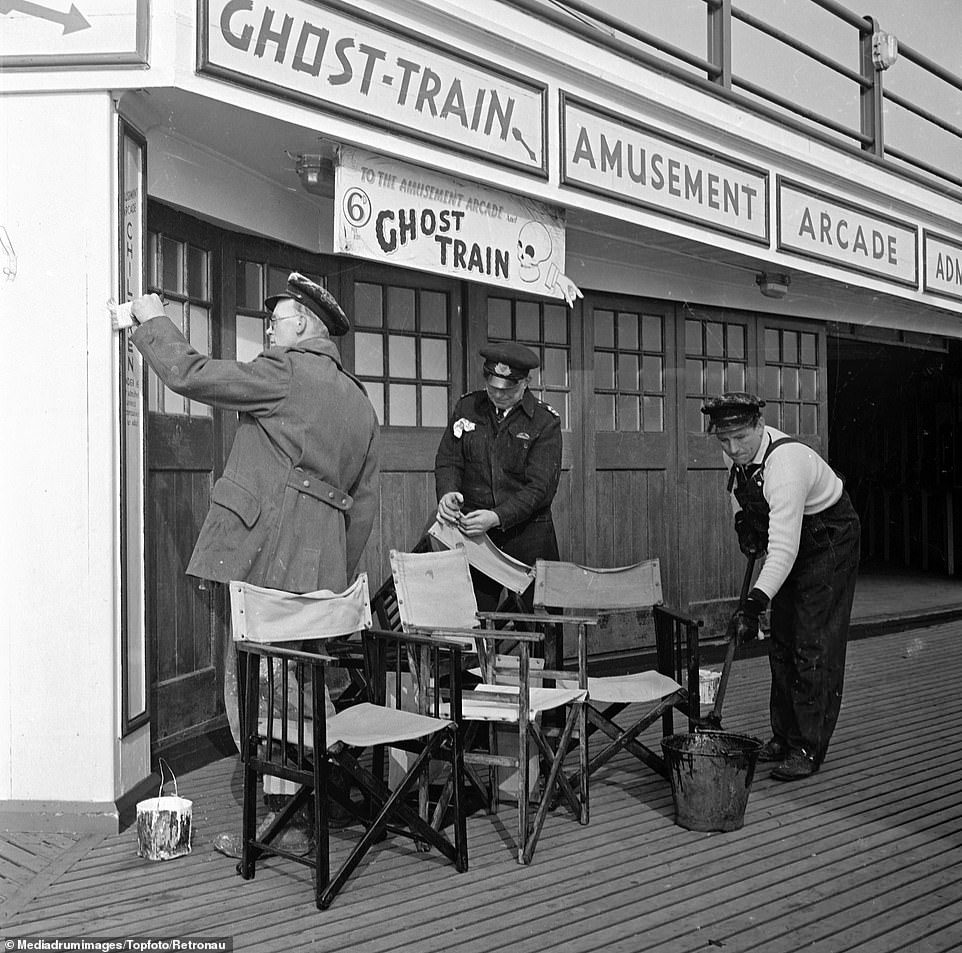 Brighton Pier is also famous for its amuseument attractions which included back then a ghost train, which cost one sixpence, or 60 pence in today’s money

Even though airfares became increasingly affordable throughout the 1950s and 60s, a trip to the seaside was still a staple for most families lucky enough to get a break. On a sunny day in Brighton, the town was swamped with people from all over south-east England, and especially from London.

Usually families would stay in a seafront guesthouse or a ‘Hi-De-Hi’ style holiday camp, which offered a brief respite before the children would be back on the beach building sand castles, rock pooling or, more likely, begging for coins to feed the enticing arcade games.

And what would a trip to the seaside be without a piece of rock? 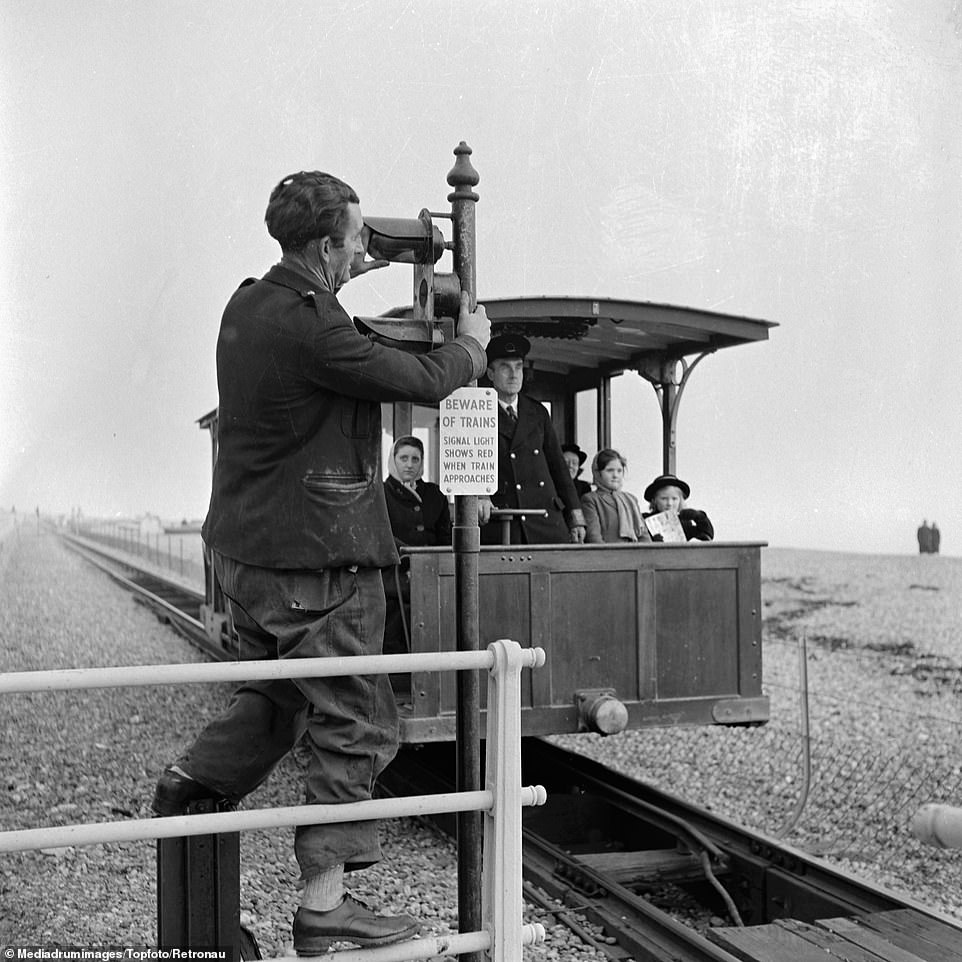 Another iconic attraction in Brighton is the seafront train. (Pictured) The train is driven up and down the line with a happy family in the back as the crossing lights are repaired. A sign warns people to ‘Beware of the Trains’ 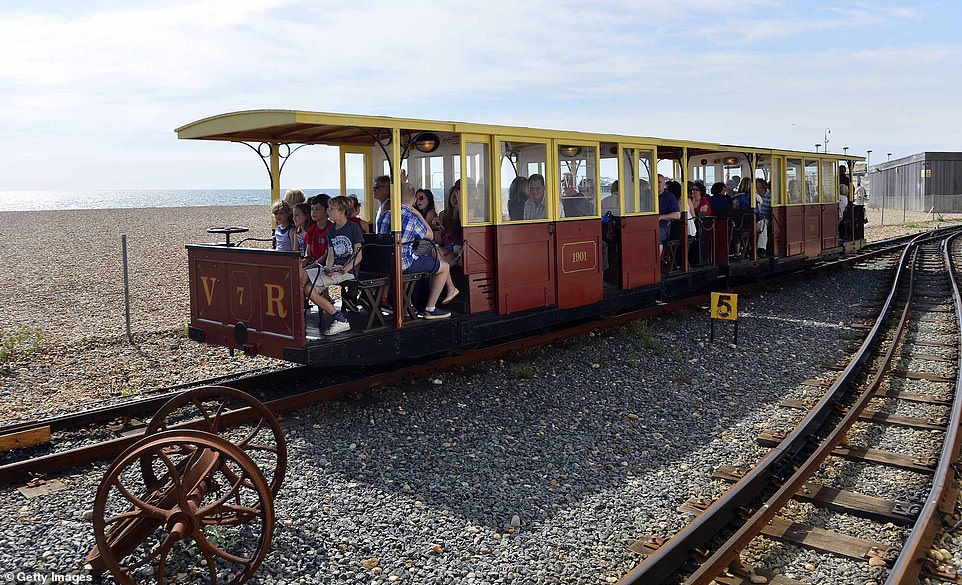 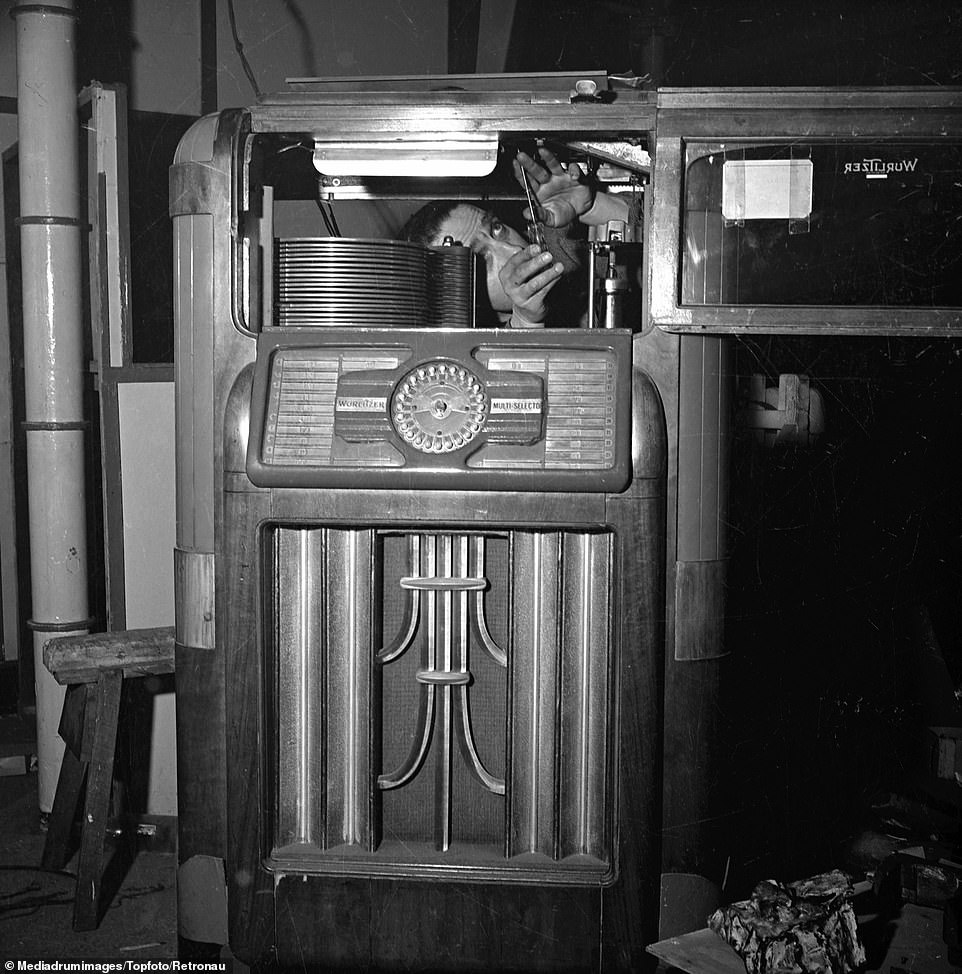 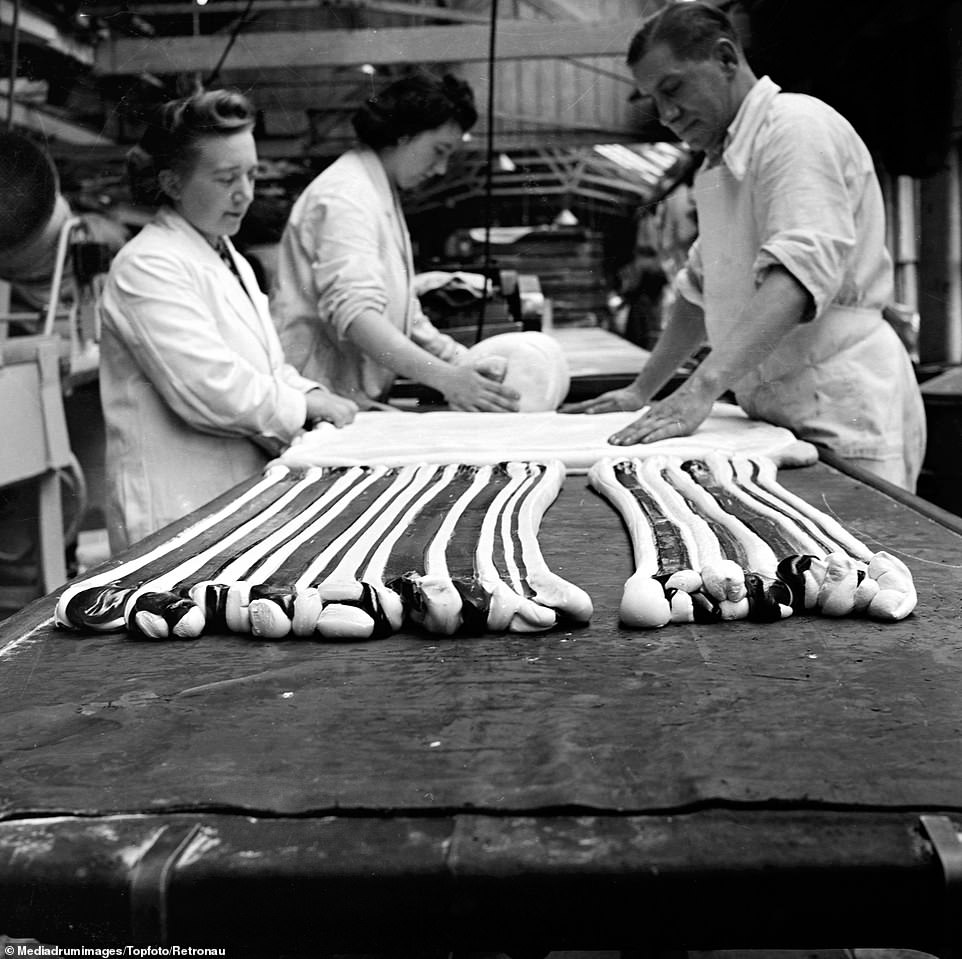 An iconic sweet from Brighton is the sugary ‘Brighton Rock’. Workers are preparing the sugary rolls to spell out the sweet’s name in this photo. After that they will be rolled together and stretched

Fascinating photos show how the sugary sweet was initially wrapped into a huge roll of candy, approximately one footwide, before it was endlessly stretched and chopped to its more recognisable form.

At first, each of the letters crafted by the sweetmakers would measure a couple of inches high. Then it would be slowly stretched over 180 yards until the ‘Brighton Rock’ writing only measured a fraction of an inch.

The pictured slab of candy would probably make just under 1,000 mouth-watering sticks of rock. 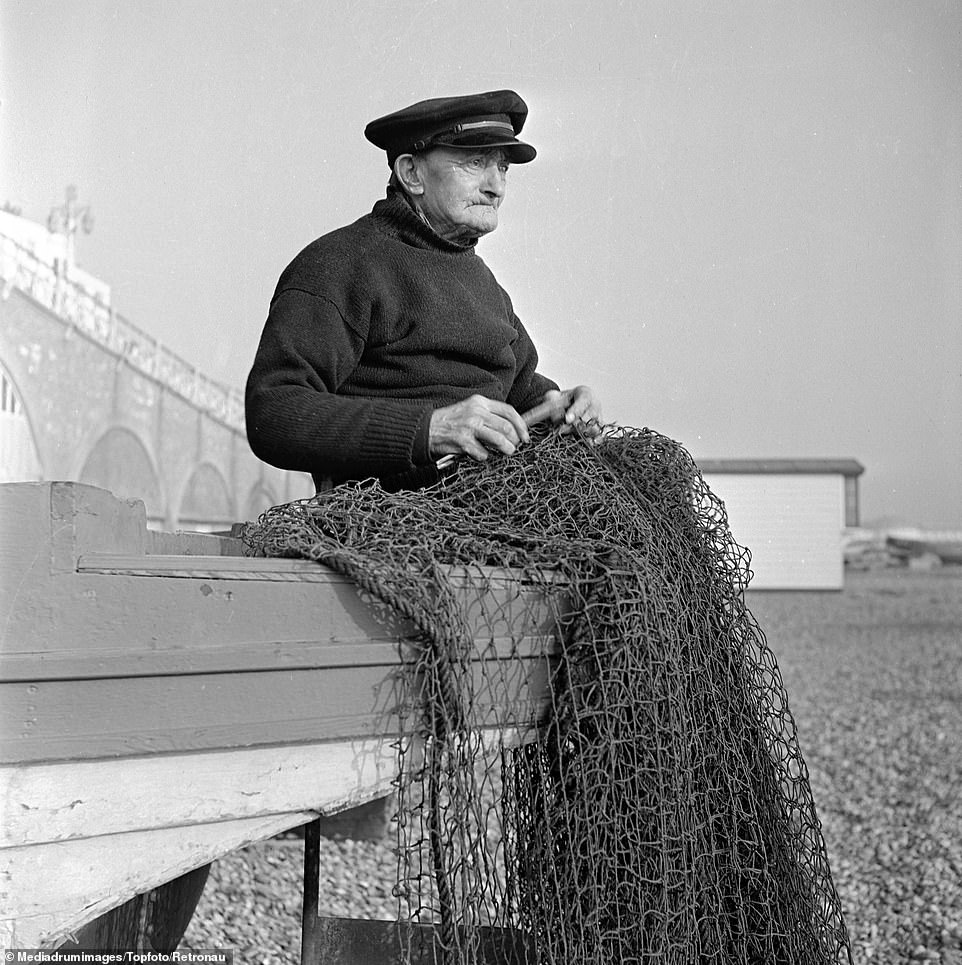 A Brighton fisherman carefully mends his net. Brighton is also famous for its fish and chips which is very popular with visitors to the seaside town

A SHORT HISTORY OF BRIGHTON PIER

This is Brighton’s most famous pier. The Chain pier, which was the first to be built in Brighton, was little used once the city was connected to the railway line as this provided a cheaper means of transport. The second pier, the West Pier, was burnt down in 2003. Although still visible from the coast, it is no longer accessible to the public.

1899 – The pier is opened for the first time on 20 May this year, although it is still unfinished. Its construction had been severely delayed, requiring Acts of Parliament and donations to keep the project going.

1905 – The first amusement arcades are added to the pier

1911 – A music hall is added. It played host to Charlie Chaplin at the beginning of his career and Stan Laurel, who would later be involved in the comedy act Laurel and Hardy.

1984 – The pier is purchased by gambling and betting company The Noble Group. They removed the entrance fee to encourage more people onto the pier to enjoy its arcades, fairground, and fish and chip shops

2016 – The pier is bought by The Eclectic Bar Group, now called the Brighton Pier Group. They have maintained the pier much as it was before