A crafty fashion blogger has revealed how she created a stunning prom grown completely out of trash bags.

Amber Scholl is know for making her very own DIY dresses but her latest creation outdid all of her past looks as she was able to make garbage look luxurious when she made the sheer gown.

The 24-year-old from Los Angeles became so popular for her bizarre dress creations that her fans said she could make a garbage bag look good so she took inspiration from them and created this one-of-kind look.

Designer: Amber is know for making her very own DIY dresses but her latest creation looked luxurious when she made the sheer gown look couture

Amber shared in a YouTube video that she was getting a ton of comments from people similar to this exact one, ‘Amber could wear a trash bag and still look bomb,’ to which someone replied: ‘I won’t be made if she made a video about it.’

So she decided to listen to her fans and give them what they wanted – a dress from garbage bags saying on her Twitter, ‘When someone calls you trashy, make a dress out of trash bags and prove them fabulously correct.’

She shared an exact tutorial of how she made the dress in a YouTube video which details every step of the process starting with Target to buy black and white trash bags.

Amber told DailyMail.com that the entire dress took about seven hours to finish the and the total cost was just around $50.

The second stop she made was to Macy’s because she needed to get a base for the dress which she decided on a black corset bodysuit.

After that she went to Joann Fabric to buy two rolls of duct tape and scotch tape before going home to start the dress.

The first step in making the dress was to decorate the bodysuit with trash bags by taking a garbage bag, stretching it out, cutting it into smaller pieces and then curling those pieces into tiny knotted balls that look like roses.

Using tape, wrap all of the roses in place before pouring the glue all over the bodysuit, lying down all of the roses on top until they’re completely covering the entire bodice including the underwire bra. 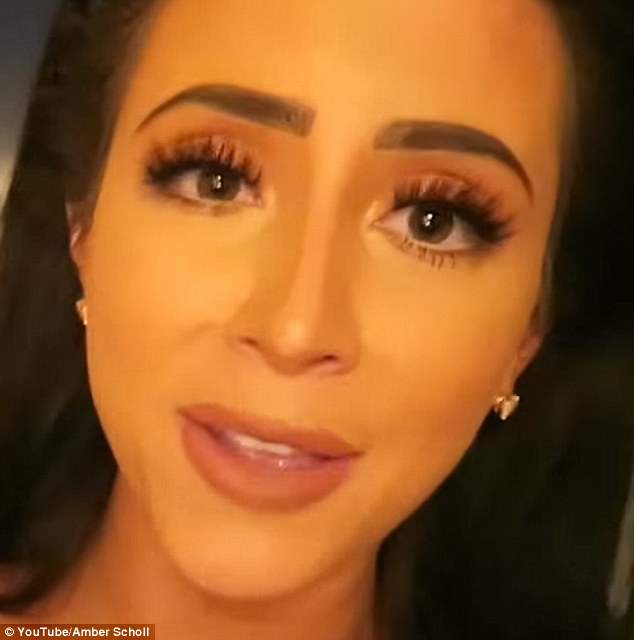 Talented: She decorated the bodysuit by stretching out garbage bags, cutting them into smaller pieces and then curling those pieces into tiny knotted balls that look like roses 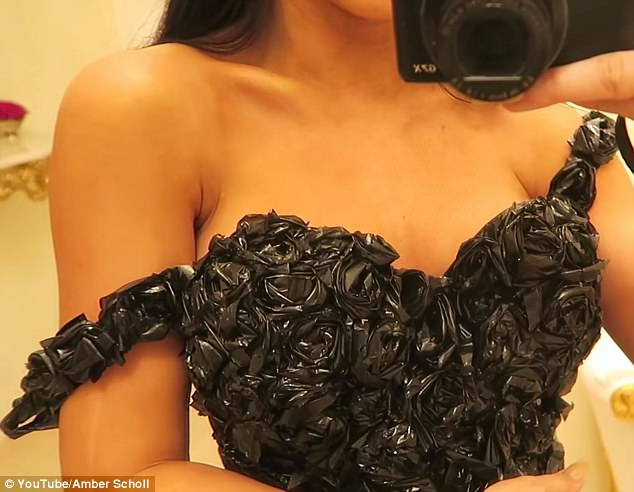 Roses: Once she created the rose balls she glued them onto the corset using E6000 glue

Gorgeous: She looked at herself in the mirror saying she’s even shocked by the final look as she topped the dress off with Saint Laurent heels admitting this was the ‘best DIY I’ve ever done’

After the top was done, she took a long black sheer pleated maxi skirt that she was going to wear to Coachella but didn’t so she used it for this look.

The blogger then decorated the hem of the skirt to match the top but this time she took bigger chunks of the trash bags and rolled them up exactly like she did before, gluing them along the bottom of the skirt

She then layers the roses up the skirt a little bit to create ‘more dimensions’ and glues them on in a zigzag pattern until she is finally done with the entire look at 3:37am.

The final product is absolutely gorgeous – the gown is stunning and completely sheer while her legs show through the skirt so you could see the bottom half of the bodysuit. 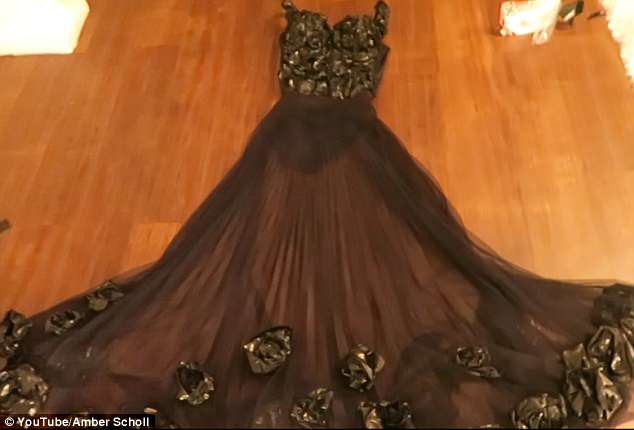 Ta-da: She layered the roses up the skirt a little bit to create ‘more dimensions’ and glued them on in a zig zag pattern until she finished the entire look at 3:37am 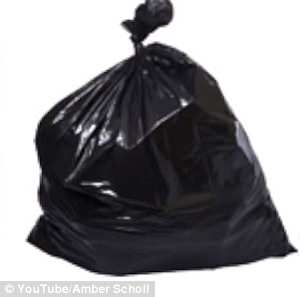 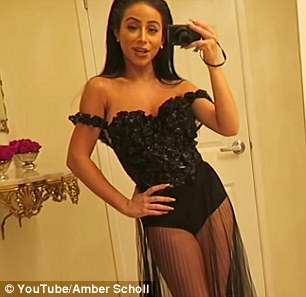 Transformation: Amber joked that this was a before and after photo of her design with the trash bag being the before and her dress being the after

The sleeves also hang down a bit low so it almost looks like an off-the-shoulder neckline and she even looked at herself in the mirror saying: ‘I literally shook my own self on this one.’

She topped the look off with Saint Laurent heels and admitted, ‘Honestly I think this is my best DIY I’ve ever done.’

Amber told DailyMail.com what made her start to make DIY dresses admitting: ‘I always loved fashion and am often bored by what I see in stores.

‘I was always altering things and adding things to stuff I bought so I figured why not just learn to start from scratch?’

As for what she does with the dresses once she’s done creating them Amber confessed: ‘I keep them! I usually sit them up in a special place in my closet. I practically have a full runway collection of things I made at this point.’

Honestly the dress wasn’t originally intended for prom – though I suppose tis the season!! I’m super extra so I would wear it anywhere – but it certainly would suit prom as well.

Everything she learned how to do she taught herself admitting to the site, ‘Everything is always trial and error – so I just go with it and try new things until I can create the vision in my head.

‘It takes longer than someone who is trained for sure but it makes it more special to me knowing I truly crafted it out of my imagination from beginning to end, even with the assembly process. 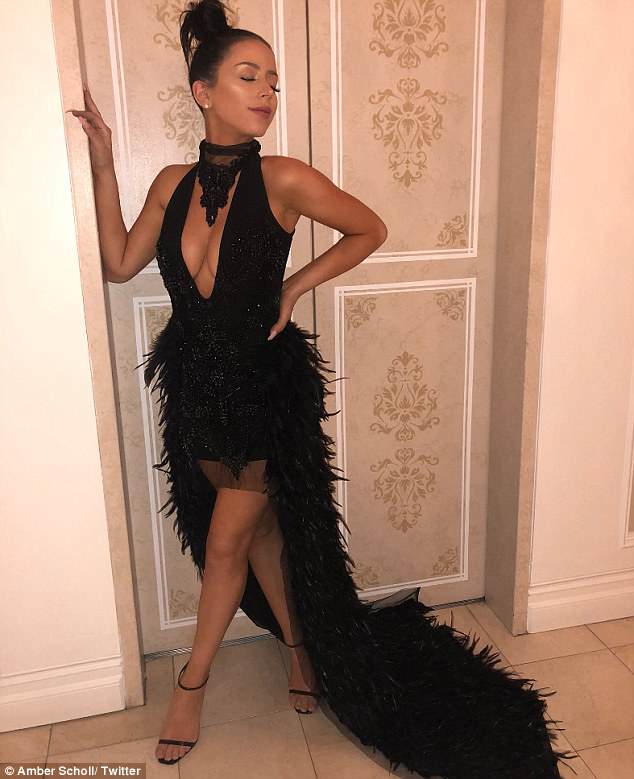 Prom: She shared another YouTube video revealing how she transformed a $4 dress into this statement gown 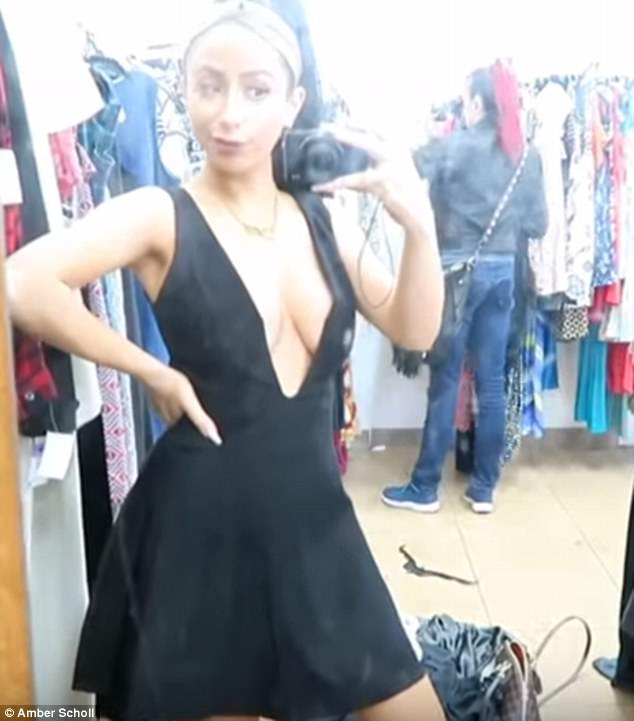 Before: Amber purchased this short flared skirt dress from her local Good Will thrift store

Just recently she also transformed a $4 dress from a thrift store into a stunning gown which she also shared on YouTube.

She revealed that she had been contacted by lots of high schoolers about doing a video ahead of prom season so she decided to see if she could DIY her own prom dress.

‘You don’t need to break the bank to look fab,’ she told the camera.

Heading to her local Good Will thrift store, Amber bought a black dress with a plunging neckline and full skirt for $4.

Revealing that she had no preconceived ideas about what kind of dress she was going to buy she tried on several dresses before settling on a style.

A fan of customizing her own clothes and interiors, Amber then traveled to Imperial Trim & Bead in downtown LA to purchase some materials.

The owner Benjamin then helped her select a crystal mesh and a feather trim so she could pimp put her prom dress, however Amber admitted that although she loved the materials she bought, she didn’t have a plan.

She also bought a needle and thread and some glue.

‘Disclaimer, I don’t really know what I’m doing because I’ve never done this before so we’re just going to see what we come up with,’ she added.

Amber then tried on the dress before she made any changes to it to try and help her decide on a plan of action. 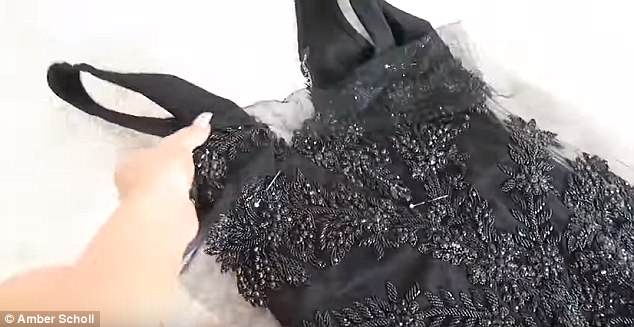 Customized: A fan of customizing her own clothes and interiors, Amber purchased beaded material to attach to the dress 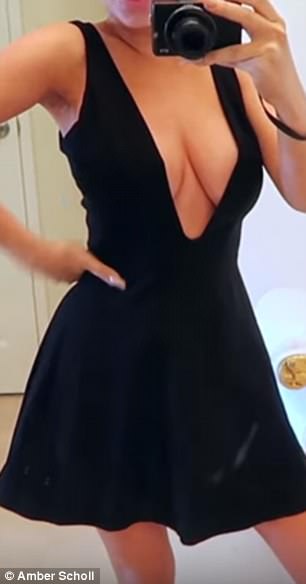 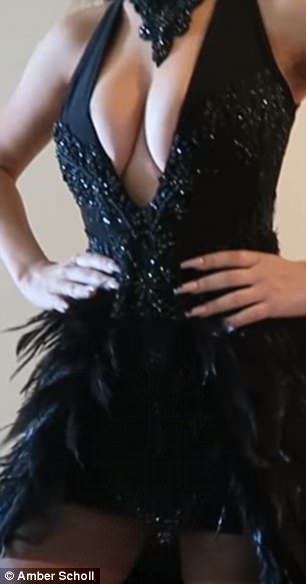 New look: She also pinned back the skirt to give it a bodycon effect before attaching a feather skirt to the back 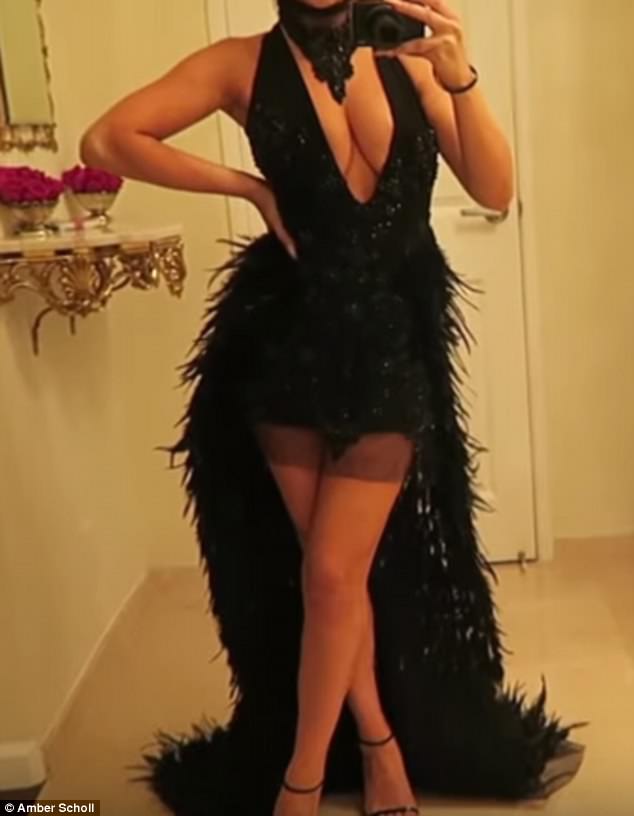 Finished result: Amber’s dress looked completely different by the time she had made the alterations to it and she admitted it looked ‘fabulous’

‘First things first, the skirt is flared so we’re going to go ahead and make it tight,’ she explained.

She then removed the dress and admitted that although she didn’t really know what she was doing, she ‘folded it like origami’ before stitching the pieces together at the back.

‘Since you’re not going to be able to see this you can totally make a mess,’ she added.

Next, she tried the dress back on to show how it was tight on the bottom half before explaining that she was going to add the crystal mesh to the front of the dress.

Laying it on top of the front of the dress, she secured the mesh in place, cutting out the neckline.

She then made a neckpiece using the same crystal fabric and added hooks at the back to secure the choker in place.

For the final touch, Amber wrapped a feather piece around her waist and then sewed it in place, creating an over-skirt effect at the back.

She then tried on the finished product and said: ‘Wow, it’s fabulous. I’m living for the drama of this skirt. I’d say we did a damn good job’.

Since posting about the video on her Twitter page, Amber’s creation has gone viral, gaining over 139,000 likes in a matter of days.

And hundreds of people have also taken to the comments section to voice their appreciation.

Twitter user Elle Mae wrote: ‘That’s genuinely amazing! I used to love doing things like that! Yeah i think it looks great how it is! It is gorgeous definitely looks expensive!’

A sentiment shared by @michaelas_music who typed: ‘honestly u need to become an official designer’.

And Salami Azeez Abiodun wrote: ‘You need to open your own fashion house. This is so lovely’.