A flaming fuel tanker that bounces, a souped-up Dodge Charger and a bright orange Lamborghini are just a few over-the-top displays at an action-packed arena show based on The Fast and the Furious franchise.

And if that isn’t enough adrenaline for one day, lovers of the explosion-laden films will also be able to watch a Honda Civic EJ1s chase a jack-knifed lorry and witness a submarine crash through ice.

‘It is not a real Akula-class submarine,’ said Rowland French, the creative force behind what he says is one of the most ambitious live arena shows ever staged. ‘Much as I would like to have the opportunity to play with a real one.’

‘It will look like one though,’ he promised the Guardian ahead of the show’s London opening in January. 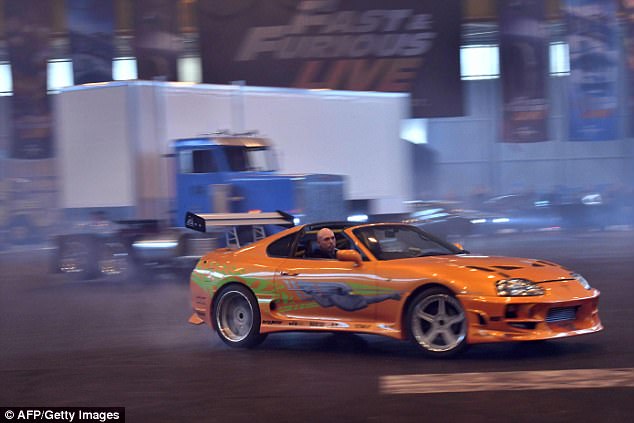 A driver gives a demonstration of one of the cars, which are part of The Fast and Furious Live production, in a warehouse in the East Midlands

Promising ‘the most spectacular live arena production’ ever, producers invited the journalists to their secret countryside base in the East Midlands to unveil details on Thursday.

Promising a game-changer, producer James Cooke-Priest said it will be a pioneering moment in episode of entertainment history.

‘For me personally it was Cirque du Soleil which reinvented the circus, Pixar and Toy Story for animation and iPod for music,’ he said. 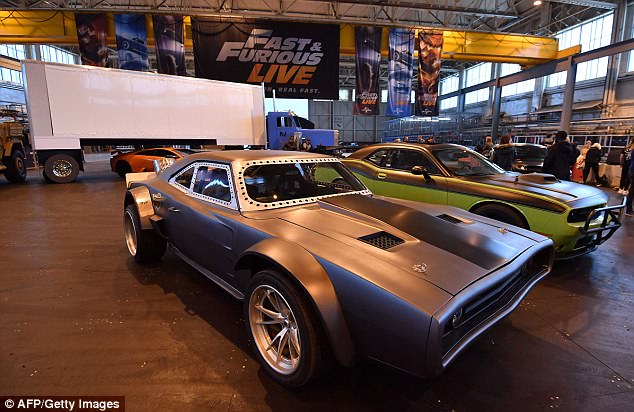 ‘They raised the expectations of what was possible.’

French, Cooke-Priest and fellow producer Chris Hughes have worked passionately on the project for five years to make sure they get it right.

Now their vision of a theatre show that surround its actors and story with an insane display of high-octane action is nearing completion. 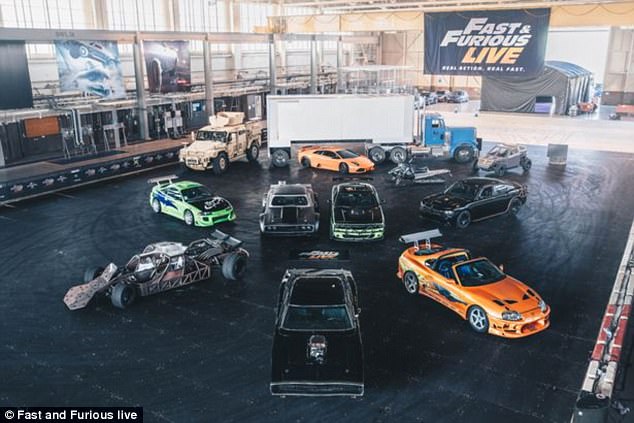 French, who worked on Top Gear, said he kept his original story under wraps for a long time before pitching it to anyone.

‘No one asked me to write the show and I can’t work out if that’s sad or not,’ he said. ‘I wrote the whole show from beginning to end.’

The self-confessed petrolhead says his love for the franchise spills over into his day-to-day life.

‘I love modified cars. Even at my age I still have a modified car. I have a supercharged M3 which is very childish … it doesn’t get in to car parks or over speed bumps.’

His concept recreates 18 real stunts from the films in a two-hour show with actors and a narrative. 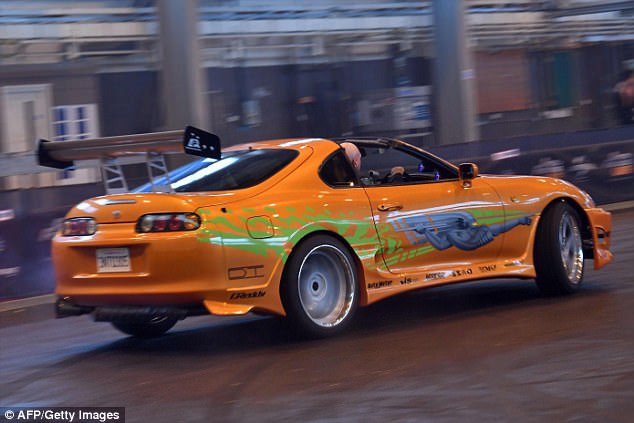 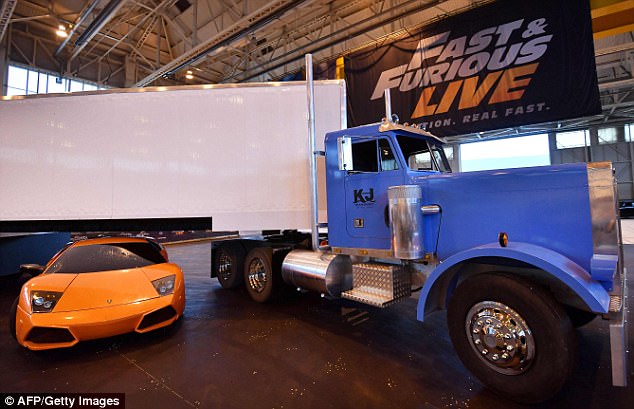 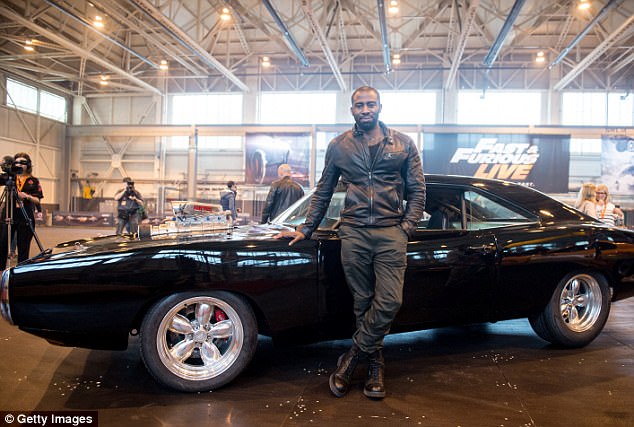 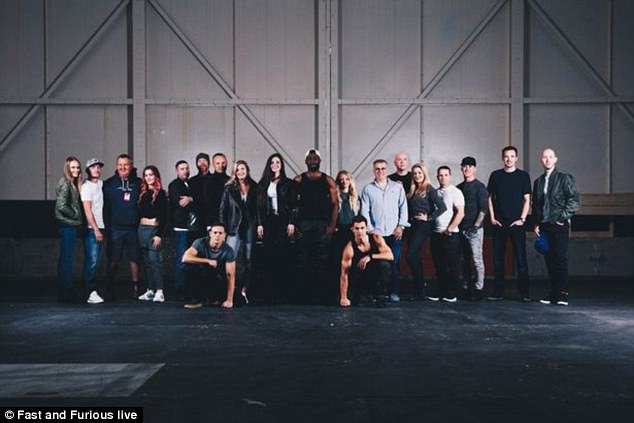 The three British producers pitched the idea Universal Pictures, which produced The Fast and Furious, more than four years ago.

French insists the show isn’t just for young men who can’t get a girlfriend.

‘It’s like what Cirque du Soleil did for circus,’ he said. ‘ 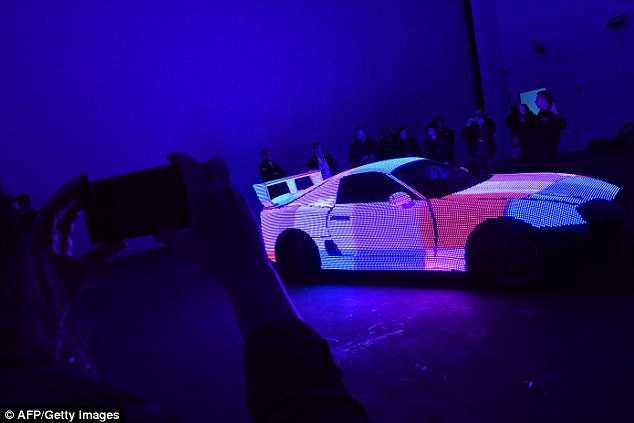 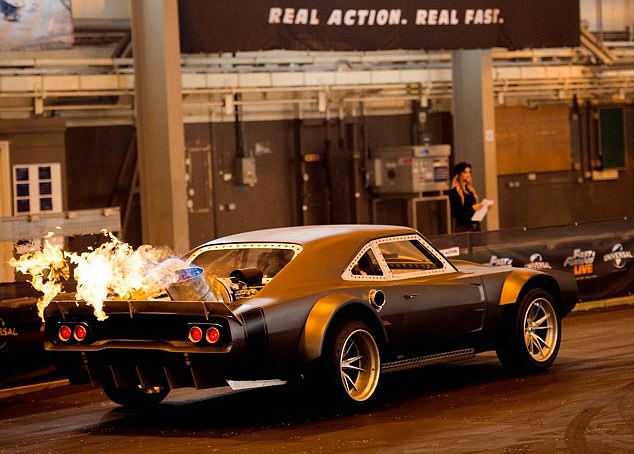 Does French think it’s sexist to suggest the show is only for men who like fast cars?

‘My wife would certainly say so, she is a fast car lover,’ he said.

Vin Diesel and The Rock have cemented themselves as the muscle-bound, masculine heroes of the franshice.

But the films also feature alpha female characters such as Michelle Rodriguez’s Letty.

British actor Elysia Wren will play the live show’s alpha female despite being only a year out of drama school. 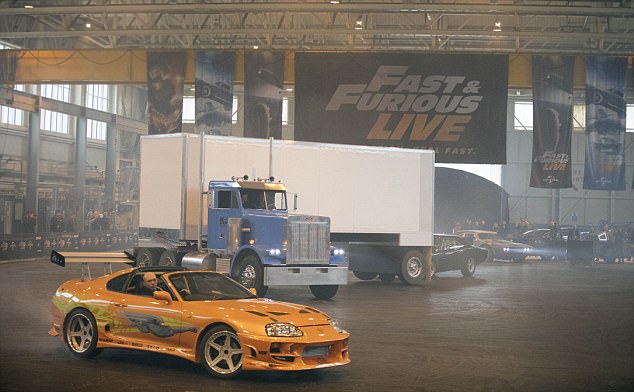 ‘We used the three coats of the Lamborghini orange for our car which no one ever does, it is three slightly different shades. It’s perfect,’ French told journalists

‘I feel utterly blessed to be part of this,’ she said.

‘This is not where I thought I would be. I was a fan of the movies. I don’t know all the absolute details of the cars but I love the storylines and I’m such a huge fan of Michelle Rodriguez.’

She too rejects the idea that the series is just for boys.

‘They appeal to everyone, they have really powerful female characters, the music is great, the car chases are great, there’s a crime aspect,’ she said.

‘The character I’m playing is an alpha female so that is empowering.’

But she admits she is not a petrolhead – she drives a 15-year-old Vauxhall Astra and only passed her driving test on the fifth go.

‘I’m an OK driver. They are teaching me how to drift … they have been very patient with me but I’ll get there, I’ll get there,’ she said ahead of the five-year tour.

French said 45 per cent of the show’s production staff are female, as are three of the 11 stunt drivers.

After being selected from 2,000 applications, stunt drivers are seven weeks in to a 16-week training schedule described as more choreography than driving.

French said special effects and 3D projection mapping will be used in ways that have never been attempted.

About £15 million will be spent on stunts and £10 million taking the show on tour, according to the producers.

But the bigger shows are, the harder they can fall. Ben Hur Live was billed as the biggest-ever indoor spectacular back in 2009 and was something of a flop according to Michael Billington of the Guardian, who wrote: ‘Good intentions and vast resources are no substitute for vision and theatrical imagination.’

But French and his colleagues remain confident and have released tour dates.

They start at London’s O2 on 19 January 2018 and will visit another 22 cities in a total of 14 European countries.

Though the producers are emphasising a broad appeal, franchise fans are sure to appreciate the lengths they have gone to in recreating the cars from the movies.

The Lamborghini owned by Brian, portrayed by actor Paul Walker who died in a car crash during but unconnected to the filming of the seventh movie is proudly described by French as the perfect copy.

‘It is believed to be the only one-to-one replica,’ he said.

‘We used the three coats of the Lamborghini orange for our car which no one ever does, it is three slightly different shades. It’s perfect.’