Father, 31, dies after jumping from 2nd floor in escape

A man was killed by two thieves after he jumped from a second floor window as he tried to escape them.

Sam O’Brien’s body was found in a crumpled heap on the pavement next to a busy road.

The 31-year-old had been targeted by the two thieves who in previous weeks had stolen mobile phones and bank cards from other men, threatening them with weapons.

Ide Faysal and Abidiqader Shidane, both 18 and from Middlesex, confronted O’Brien in St Giles Close, Reading, on July 2.

They fought and O’Brien suffered a head injury before fleeing into a nearby block of flats on Southampton Street.

Cornered, he tried to jump to safety from a second floor window but crashed on to the pavement and sustained ‘fatal injuries’.

Speaking after the trial which saw both men convicted of manslaughter and robbery, O’Brien’s family thanked the police, the CPS and their barrister for bringing the two young men to justice.

O’Brien leaves behind a seven-year-old son who is ‘devastated’ by his father’s death.

In a touching tribute statement O’Brien’s family described him as ‘an extremely popular man, a much loved son and a brother, with everything to live for and a devoted father to his seven-year-old son, who is devastated.

‘As a family we are united in grief, his loss has deeply affected us all.

‘He had many things planned and had a very bright future ahead of him before his life was so tragically cut short.

Ide Faysal and Abidiqader Shidane, both from Middlesex, confronted O’Brien (pictured) who fled into a nearby block of flats

‘Sam is deeply missed by all of his family and friends and a light has gone out of our lives.

‘We have finally got justice for Sam and we would like to thank the police, CPS and barristers for their determination and hard work.’

Thames Valley Police said Faysal and Shidane were convicted of manslaughter and robbery of Mr O’Brien by a jury at Reading Crown Court.

Shidane denied both robberies but was later convicted. 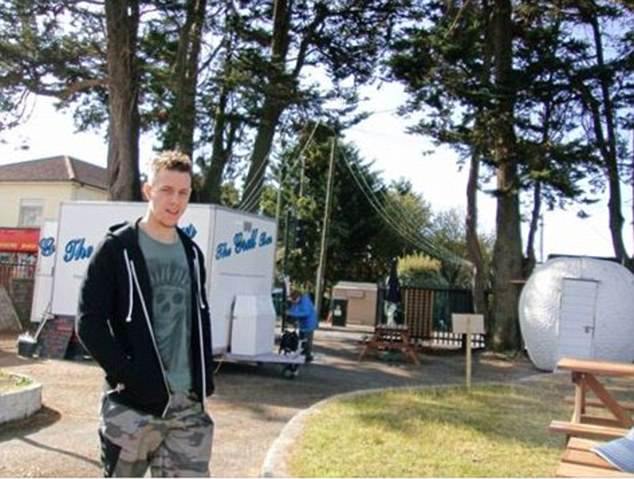 O’Brien jumped from a second floor window and crashed on to the pavement below suffering fatal injuries. The two teenagers were later convicted of manslaughter and robbery of the deceased

Detailing the moments before O’Brien’s death, a spokesman said: ‘Mr O’Brien then fled from the pair and ran into a block of flats in Southampton Street.

‘It is believed that he then tried to leave the flats through a second floor window but fell in the process, causing him to sustain fatal injuries.