Father, 43, who died with his two sons in their home was a controlling and abusive husband

A mother-of-two fled her home after she was beaten and stabbed by her estranged husband before he killed their two sons and himself, an inquest has heard.

Lottery winner David Stokes, 43, was found with a knife in his chest at his semi-detached home in Hinckley, Leicestershire, after barricading himself inside the property with his family in the early hours of November 2, 2016.

His sons Adam, 11, and five-year-old Matthew were also found dead, though a post-mortem failed to shed light on how they were killed.

They were found together in a bed in the home, holding hands.

Stokes’ wife and the children’s mother, Sally Stokes, was held hostage but managed to escape with serious stab injuries following a five-hour police stand-off at the family home.

Today, she told an inquest at Loughborough Coroner’s Court how Stokes had hit her with a rolling pin and tried to smother her before stabbing her in her side.

Mrs Stokes described her relationship with her husband as abusive and added that he had been on the internet looking at sites for escorts and date rape drugs.

The hearing was told Stokes had previously won £40,000 on the lottery and spent the winnings on shares and a new car, with his wife also finding evidence of him paying for prostitutes.

David and Sally Stokes with their sons on their wedding day. After a siege at their home, David killed Adam, 11, and Matthew, five, before killing himself. He had previously stabbed his wife 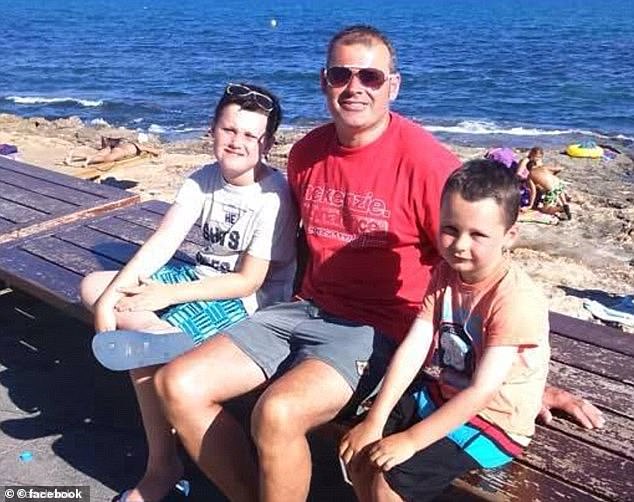 David Stokes, 43 (with his sons Adam and Matthew on holiday), had barricaded himself inside the semi-detached home in Hinckley, Leicestershire with his family in the early hours of November 2, 2016 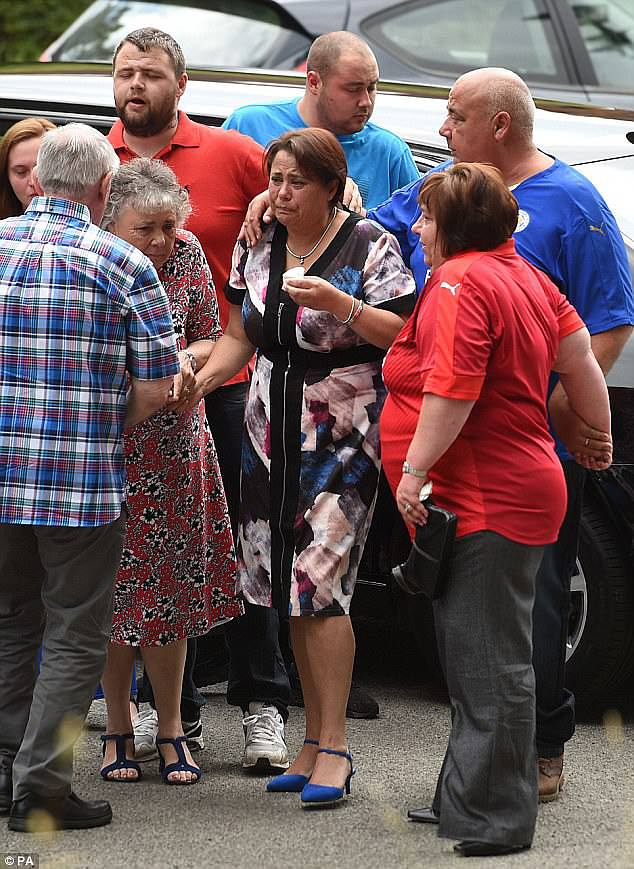 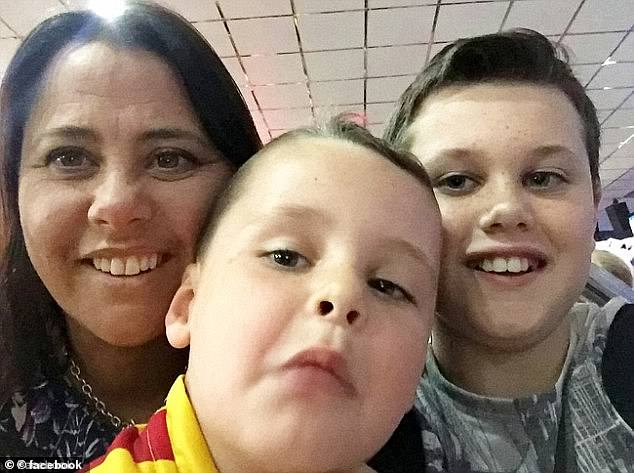 He had been married to his wife, a pub assistant manager, since 2011 but their relationship deteriorated

But Mrs Stokes saw evidence he’d been searching for date rape drugs just two days after the couple had been to a Halloween party together and she’d woken up the following morning feeling ‘spaced out’.

A note that was later found addressed to Sally read: ‘You pushed too much to see what I had done. If you had left it, we would have been happy forever.’

The 47-year-old pub manager gave harrowing evidence to the hearing about the night she was attacked, saying she didn’t think the ‘reality’ of their separation ‘had actually hit him’.

She told how she and Stokes, 43, had been together for 16 years, but said her electrician husband had ‘lied about a lot of things’ throughout their relationship.

He spent all the cash from the lottery winnings ‘on himself’.

Sally described how their marriage deteriorated in the months before the incident after she found a bundle of lottery tickets behind a sports bag in a cupboard, despite Stokes her they had no money, along with a mobile phone.

However, when she quizzed him what was on it, he refused to let her see – and smashed it up in their kitchen.

She added that he had been going on dates and using dating sites. 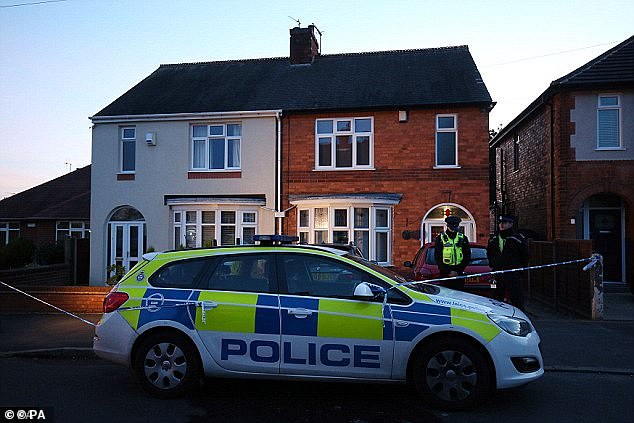 The hearing also heard that, before the fateful day, Stokes had wanted to get back together with his wife. Before they separated, three months before the stand-off and killings, she had discovered a second phone he had been using and said that Stokes had been spending money without telling her why 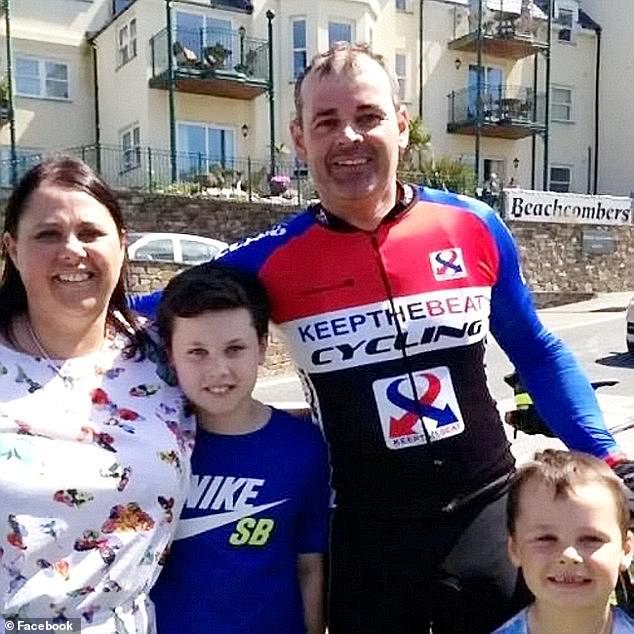 At an inquest today, Mrs Stokes described her relationship with her husband as abusive and added that he had been on the internet looking at sites for escorts and date rape drugs

However, she added that on the morning of November 1, 2016 – the day the incident began – he left his mobile phone in the kitchen and she looked through it after seeing a strange email pop up on the screen.

Sally told the inquest: ‘He had made bookings with escorts. I also saw in history about date rape drugs. My mind went back to when I did not feel right on the Sunday morning.

‘I had found out my husband had been regularly visiting prostitutes and escorts and telling me we had no money and couldn’t afford to send Adam on a school trip.’

She told Stokes’ brother and father about what she’d found, then called him and said she’d reported her findings to the police, ‘to see what his response was’.

After he returned home, Sally said he ‘just kept telling me he loved me, over and over, and he would never do it again’.

But she said the situation was ‘calm’ and she ‘didn’t feel any danger’.

Later that evening, Sally left Stokes in the house with their sons while she went to discuss the situation with his family.

She returned home around 9.15pm and found him in the kitchen.

The inquest heard he offered Sally a cup of tea before she went upstairs to get changed.

But she said: ‘I didn’t realise he had come up behind me. He hit me over the back of the head and put a pillow over my head and tried to suffocate me.

‘I was wriggling and screaming for Adam because I thought he was the only one who could help me.

‘I ended up on the floor by the side of the bed and asked him, ‘Where are Adam and Matthew?’ He said they were with someone.

‘He was holding a rolling pin. When I came around the bed tried to hit me again. He looked evil, and I thought, ‘I am going to die’.’

After that, he tried to make her put cable ties on her hands and ankles but Mrs Stokes demanded to see their sons.

She refused to put the cable ties on herself and there was another struggle. 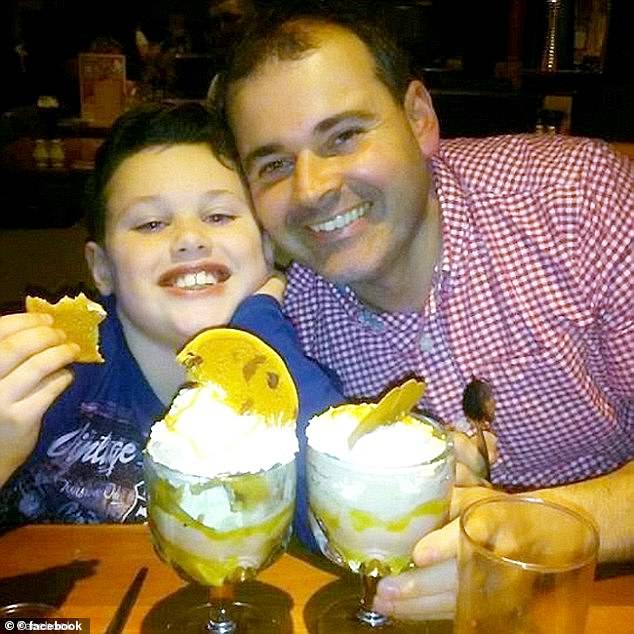 Mrs Stokes, reliving her ordeal, said she didn’t know what her husband had been capable of 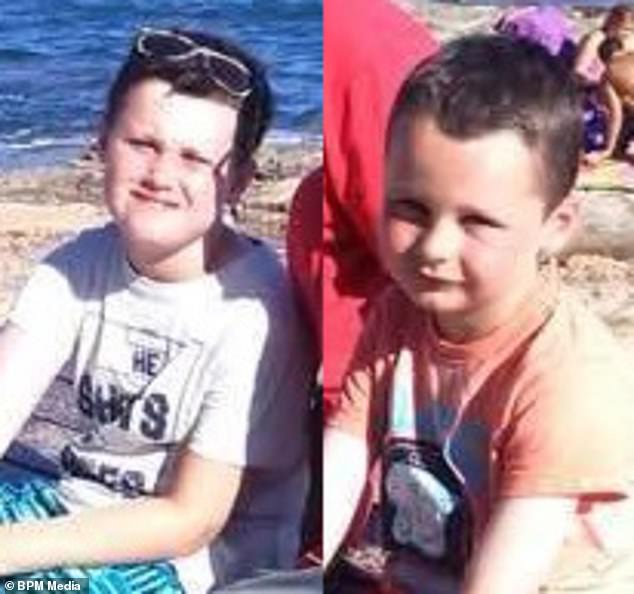 Adam, 11, and five-year-old Matthew were found dead, though a post-mortem failed to shed light on how they were killed Describing the moments after Sally ran screaming from the home, an officer said: ‘Sally came out of the property and firearms officers went into the front bedroom where they found David’

Mrs Stokes said: ‘He went to hit me but I held onto the rolling pin and said I need to see them.’

Eventually, she managed to escape into the back garden and scream for help, hitting him in the head with the rolling pin and running.

However, she said he managed to grab her and smash her head into the wall.

Mrs Stokes said she screamed, shouting her husband’s name as she tried to raise the alarm but he just dragged her back into the house and joked as if nothing had happened.

Not long after that, the police arrived and the situation developed into a siege.

Stokes armed himself with a kitchen knife and, despite his wife’s pleas, told officers he had a gun. 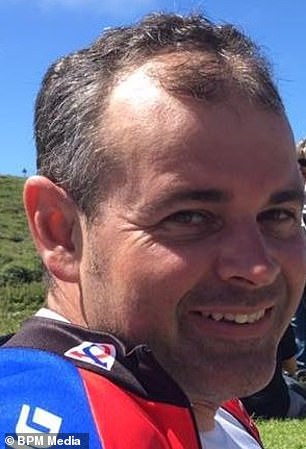 David Stokes, 43, was found with a knife in his chest at his semi-detached home in Hinckley, Leicestershire

Mrs Stokes, reliving her ordeal, said she didn’t know what her husband was capable of.

Later, Stokes stabbed his wife in the side.

She said: ‘I felt a bump in my back. I felt the warmth and put my hand there and realised he had stabbed me.

‘The look on his face was like satisfaction as if he’d kind of won. I’ll never forget that.’

After being stabbed, Mrs Stokes fled down the stairs and managed to get out of the front door.

She said: ‘I got to the bottom of the stairs and he had left the key in the door.

‘I opened it and ran out screaming and saying ‘He stabbed me’.

‘They took me over the road.

‘She said she was taken to hospital with no idea what had happened to her husband or her sons.

A doctor told her she had major internal bleeding.

She added: ‘They told me the following day about Adam and Matthew and that David had killed himself.’

Describing the moments after Sally ran screaming from the home, Mr Burdett said: ‘Sally came out of the property and firearms officers went into the front bedroom where they found David.

‘While officers were working on David other officers searched the house and in Matthew’s room a sergeant discovered the boys.

‘A quilt was pulled back and the boys were in the same bed, holding hands.

‘There were no signs of life and had, I believe, died some time ago.’ 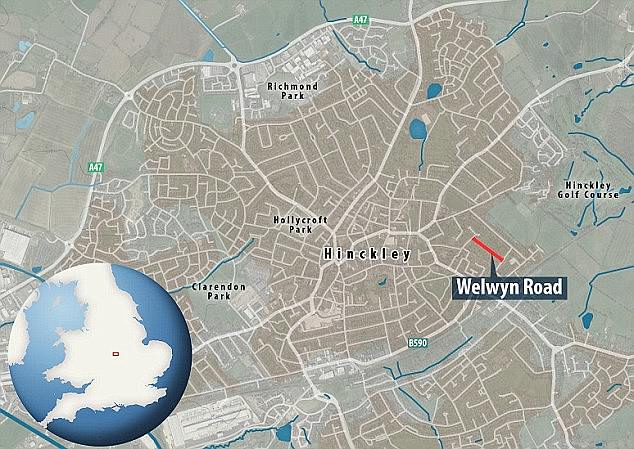 He said there was no history of violence in the marriage before the stand-off and killings.

Chemicals and knives were found in the house but there was no gun.

Mr Burdett said there were places around the house where freezer bags were found containing white tissue with chemicals soaked into them.

The various knives included one Stokes had used to stab himself. He said: ‘We recovered the knife from David – from the body.

‘There were some knives around the house that wouldn’t be in the normal place. Knives we wouldn’t expect to find. But there was no firearm.’

Mr Burdett also read out a note written by Stokes.

Mrs Stokes left the inquest before it was read out.

It said: ‘I’m so sorry for what I’ve done. Today it all came crashing down and it all had to end. We’ll be together again.

‘Sal, I’m so sorry for all the things I’ve done and hurt you. But this last week you have had me completely and totally in love with you.

‘You pushed too much. If you had left it, we could have been happy forever.’

The hearing also heard that, before the fateful day, Stokes had wanted to get back together with his wife. 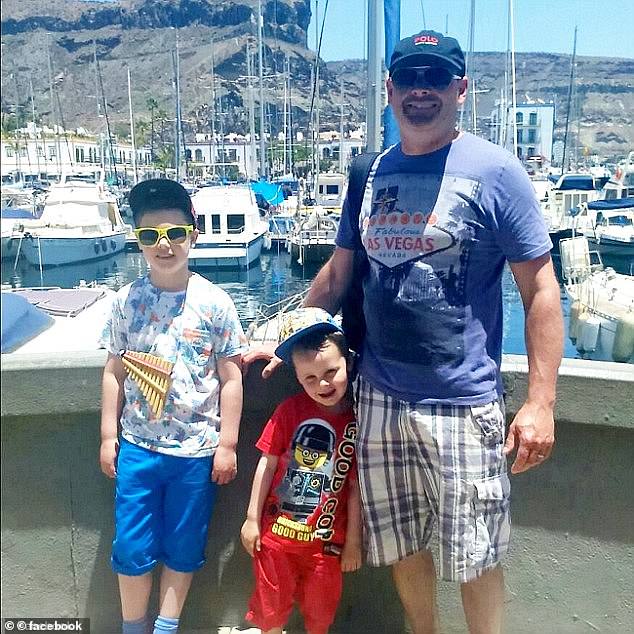 Kevin Burdett, a retired police sergeant, described the moment the boys were found at the hearing 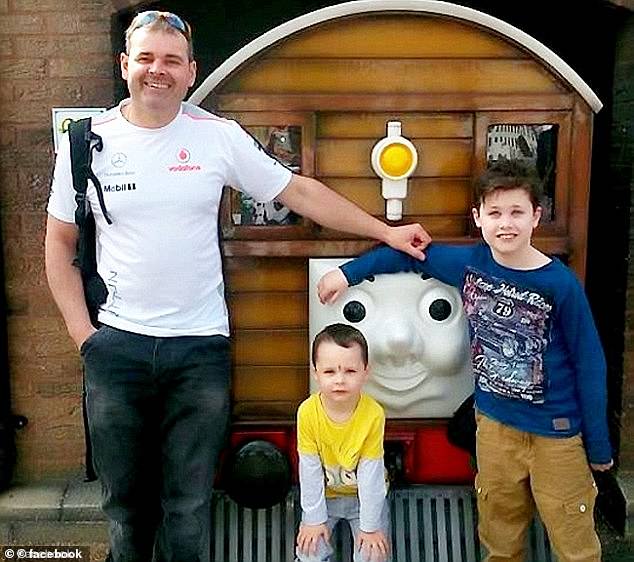 He said: ‘While officers were working on David other officers searched the house and in Matthew’s room a sergeant discovered the boys’ He added: ‘A quilt was pulled back and the boys were in the same bed, holding hands. There were no signs of life and had, I believe, died some time ago’

In a letter found at the home of Stokes’ parents, he said: ‘I have hurt you so much. I never wanted to lie to you and promise I will not any more.

‘I will not stop trying to repair the damage I’ve done to you.

‘I want to be a better person and husband. Our wedding day was the best day of my life and I should have changed.

‘You, Adam and Matthew are my world. I want to give you my attention, my love, my affection.’

A post-mortem revealed Stokes died as a result of a stab wound to the chest but police said the causes of death for the children had not yet been ‘conclusively ascertained.’