A firefighter has died from a 9/11-related brain tumor – less than a year after his father succumbed to cancer linked to the attacks.

Robert Alexander passed on Monday at the age of 43, just two years after doctors found his headaches were caused by a peanut-sized lump in his brain.

More than 1,140 people have died from World Trade Center-related illnesses in the 16 years since.

However, according to the FDNY, this is the first time that 9/11-related sickness has killed two generations of a single family.

Speaking to Daily Mail Online, Raymond’s wife and Robert’s mother, Ginger, paid tribute to the ‘wonderful men’ she has had to part with in little more than nine months. 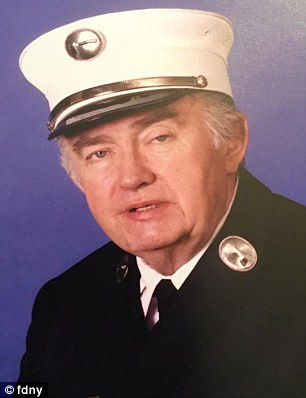 Tragic: Former police officer-turned-firefighter Robert Alexander (left) passed on Monday at 43 from a brain tumor. In November 2016, his firefighter father Raymond (right) died from lung cancer at 76, having battled seven cancers in 13 years

‘They both did everything they could that day. Nobody had any idea at all in 01 that this could happen. But they started getting sick right away.’

Both Raymond and Robert, who were incredibly close, had the day off on Tuesday September 11, 2001, but they rushed to join the thousands of first responders when the Twin Towers fell.

At the time, Robert (known to friends as ‘Bobby’) was a New York Police Department officer, before later in life joining the FDNY. On the morning of the attacks he reported to his precinct in East Harlem.

Raymond was a firefighter; he reported to his precinct in the Bronx.

They both then flocked downtown.

Unlike many first responders, they survived the mayhem as debris and people continued to fall from the sky.

For days later, they worked with thousands of others searching for bodies among the disaster site, which was omitting toxic fumes of mercury, asbestos, and jet fuel.

They also worked on the Fresh Kills landfill site in Staten Island where officers were tasked with sifting through human remains.

At the time, nobody knew the site would leave more than 500,000 people with a heightened risk of incurable cancers. In fact, a week after the attacks the EPA assured citizens that the site ‘did not pose a health hazard’. The agency has since admitted that was wrong. As of last year, Mount Sinai’s World Trade Center Health Program had counted more than 5,400 people with 9/11-related cancers.

‘It took Washington way too long to respond to the clear evidence that there was a health crisis facing so many. The Bush administration denied it for nine years, despite the research,’ Ben Chevat, executive director of 9/11 Health Watch told Daily Mail Online.

‘Now, we have so much evidence, like this tragic news today. Unfortunately there are now more and more people providing physical evidence of this crisis.’

Raymond got sick in 2003 with his first cancer, leukemia.

‘That cancer was actually curable and he was cured pretty quickly, he got his five years out of that,’ Ginger said. ‘But then he went on to his other cancers…’

He survived lung cancer, then spinal cancer, then another three cancers (‘I’m sorry,’ Ginger said, ‘there were so many of them, I can’t remember all of them’). Ultimately, he then developed a second bout of lung cancer, which proved fatal.

Raymond died on November 21, 2016, around a month after his wedding anniversary – he met Ginger decades before, at a Halloween dance party in Eastover, Massachusetts, while Ginger was on vacation with her girlfriends. (‘He asked me to dance and that was it. He wasn’t a good dancer at all, Robert was better than Ray. But I remember coming back to the room I shared with the girls and saying “that’s the man I’m going to marry”. Two years later, I did, and we had our two wonderful boys.’)

By the time of Raymond’s death, Robert had been battling an inoperable brain tumor for about a year.

He was suffering from headaches for months before his diagnosis. Once his tumor was discovered, his condition deteriorated rapidly. After he got back from a trip to visit relatives in Germany with his mother in March, he was stumbling far more than before, and he never recovered.

Nonetheless, throughout his illness he traveled to Washington, D.C. between doctors’ appointments to lobby the government to pass the Zadroga Act to provide federally-funded healthcare and financial support to first responders sickened by the fumes.

In the push to reach that point, Robert gave passionate speeches, even joking about his cancer. In one speech, available on YouTube, he said: ‘I haven’t had a beer since that day, so that’s probably worse than having cancer itself.’

Nonetheless, he told the New York Daily News last year, he never regretted responding to the attack. ‘I would do it again,’ he told the newspaper.

That, his mother said, was typical of Robert, who had always dreamed of being a firefighter like his father and grandfather, who hailed from Queens, New York.

After starting out as a diesel engineer in the Bronx, he went on to do three years with the NYPD over 9/11, before ultimately making it into the FDNY.

‘He was really, really special,’ Ginger said. ‘He was a Renaissance man. He helped everyone. He was a fighter. And he never ever spoke about his cancer. He just did it. It was a matter of course for him. He did not expect any kudos.’

Robert is survived by his mother Ginger and his older brother Raymond Jr. His funeral will be held in Massachusetts on Saturday.