A father and son who decided to rob a security guard of £10,000 in a smash and grab job as he was collecting takings from a shop have been jailed.

Shaun Howard, 55, and his 21-year-old son Charlie targeted the guard on the spur of the moment as he carried the cash at a store in Sittingbourne, Kent.

The pair pushed their victim to the ground before ripping a money box from his grasp and fleeing the scene in a white Mercedes van.

Father and son were later found hiding out at a caravan owned by Howard senior in nearby Leysdown. 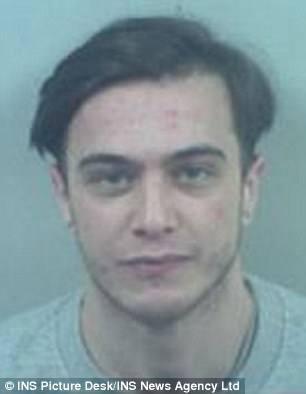 Shaun Howard (left), 55, and his 21-year-old son Charlie (right) targeted the guard on the spur of the moment as he carried the cash at a store in Sittingbourne, Kent

Both admitted robbery and were jailed for five years and four months and two years and eight months respectively at Woolwich Crown Court on Friday.

The trial heard how the duo were apprehended after cameras spotted them driving 15 miles away from the scene to their holiday park hideout.

When police raided the caravan a meagerly £123 in notes, linked back to the box, was found.

A spokesman for Kent Police said the pair struck on December 28 last year when the driver of a cash transit van was going back to his vehicle.

‘At around 8.30am, after collecting money the driver was pushed from behind and a security box containing approximately £10,000 was taken,’ he said.

‘Both men fled the scene in a white Mercedes sprinter van that was registered to Shaun Howard. ANPR technology tracked the van to a holiday park in Leysdown where Shaun owned a caravan. Both men were arrested on the same day.

‘A search of the caravan and bin bags directly next door recovered all but £123 of the money.’

Detective Inspector Gary Scarfe from the Kent and Essex Serious Crime Directorate said: ‘This appeared to be a spontaneous and opportunist incident set into motion by this father and son team who made a decision to steal the money and flee the scene as quickly as possible.

‘They showed no regard for the impact their action would have on the victim who was going about their job.

‘It was with the help of the public that the partial details of the van were obtained and the fantastic work of our Divisional officers who were able to track them down so quickly, make the arrests and recover most if of the money that was taken.’