A Louisville father and son have been charged with sexually abusing three children, all under the age of 13, over a period of several years.

A 13-year-old female victim told police that she had been sexually abused and threatened with death if she told anyone – and she was joined in her testimony by two other victims, aged 10 and 12, the court heard. 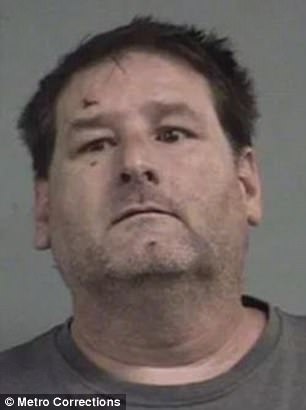 William Riggle, Jr (left) and William Riggle, Sr (right) have both been accused of sexually abusing three children aged 10, 12 and 13, in Louisville, Kentucky, over several years 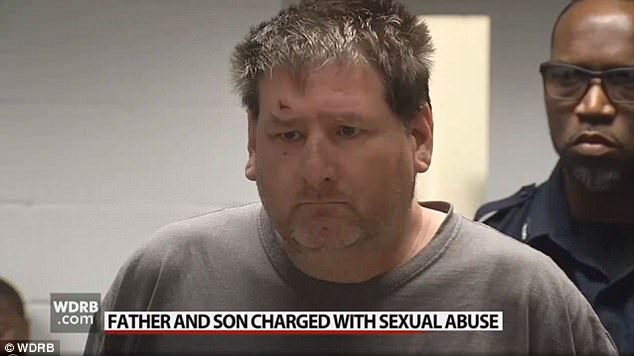 The children told police that the Riggles (Sr seen here in court on Wednesday) threatened to kill them if they told anyone. They are accused of forced sodomy and sexual touching

‘Weapons were found in the houses of both of the co-defendants, threats were made to the victims if they reported this to the authorities,’ Assistant County Attorney Cristin Southard told WDRB.

‘We certainly have serious concerns for the safety of these victims.’

The 13-year-old told police that she had suffered forced sodomy and sexual touching during a forensic interview with police, according to an arrest citation.

The other two alleged victims said the same thing when questioned, the citation claimed.

Both men pleaded not guilty to the charges. The relationship between the accusers and the men is unknown. 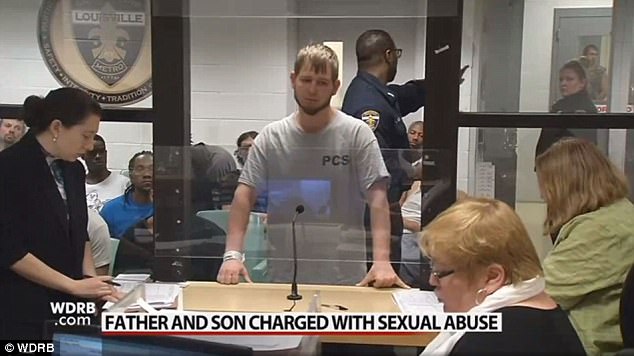 Both men (Jr seen here in court on Wednesday) have pleaded not guilty and are being held on $250,000 bond. Neither one is on the state’s sex offender registry

Neither of the Riggles is on Kentucky’s sex offender registry or have previously been convicted of sexual crimes.

Bond has been set for both men at $250,000 each; the assistant county’s attorney was strongly opposed to lowering the bond for either of them.

Both men have been booked into Louisville Metro Department of Corrections.

His postings are largely about video games he has played, occasionally interspersed with Islamophobic memes.