A man whose then eight-year old daughter almost lost an arm after she was mauled by a pit bull has himself become the victim of a similar attack.

Todd Ruckle, from Delaware, was hospitalised on Saturday after being set upon by two pit bulls and is undergoing a series of vaccinations for rabies.

In a video recorded from hospital, Todd said: ‘I just turned around, and they just were on me.

‘One was on my leg, and the other one came up to my face and got my lip, but that’s not bad. My leg’s the really bad one.’

Todd Ruckle and his daughter Emily have both been the victims of serious attacks by pit bulls in Wilmington, Delaware

Real estate agent Todd had been showing a house in the Little Italy neighborhood of Wilmington.

The two dogs were just roaming the streets, apparently unaccompanied by any owner.

The first pit bull bit into Todd’s leg while the other went for his chest and face.

He was able to push the second animal away before it could sink its teeth into his face and do life-changing damage.

‘They just snapped like a millimeter from taking my face off,’ he said. 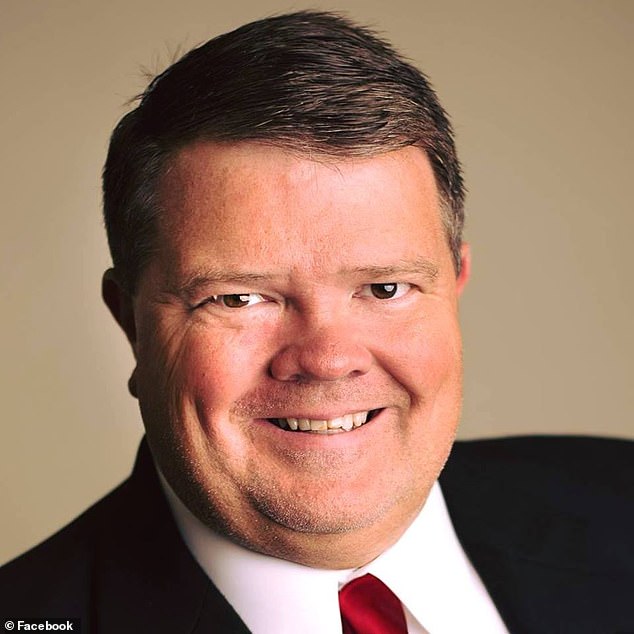 Mr Ruckle wants tighter animal control laws including mandatory insurance for dog owners after his daughter nearly lost an arm to a pit bull in 2014, and he himself needs up to 30 shots including a rabies vaccination following Saturday’s attack

Todd, a former Newark councilman, said his daughter Emily was also shaken up by the incident, which brought back awful memories of the 2014 attack in which she almost lost an arm.

‘She wouldn’t even talk to me about it,’ he said. ‘I don’t know what to do. How could this happen?’

‘I’m just very emotional. I’ve got a lot of flashback stuff going on.’

Exactly four years ago Emily Ruckle, then 8, was bitten by a pit bull named Frank who belonged to the father of Emily’s brother Jack – then 17.

Jack had recently moved in to the Ruckle’s home in Newark, Delaware and brought Frank with him when his father moved away.

Todd and his wife Maria were at a wedding, waiting for bride to walk down the aisle, when they got the news that Emily had been mauled by a dog.

Emily’s then 15-year-old sister Megan managed to save her life by wrapping her arms around the child’s neck so the dog could not bite it, and applying pressure to the wound while they waited for paramedics.

In the immediate aftermath the eight-year-old needed major surgery to reattach her right arm which the dog had torn away and spent days in a medically-induced coma.

Emily has since endured more than two years worth of emergency and corrective surgeries and rehab to save her arm.

Since having her final surgery in 2016, she has regained some of the function in her injured hand.

After his own attack on Saturday, Todd contacted the Delaware Office of Animal Welfare to report the incident.

As the owners had not proof they had vaccinated their animals against rabies, Todd requires a number of rounds of inoculations – for tetanus as well as Rabies – and antibiotics.

These may require up to 30 shots and are extremely painful.

‘No vaccinations. No nothing. It’s absolutely ridiculous,’ he said.

A spokesperson for the Animal Welfare Office, Andrea Wojcik, said: ‘The owner was not able to provide proof of vaccination.

‘Citations were issued to the owner for dog at large that bites without provocation, failure to show proof of licenses and failure to provide proof of rabies vaccine. 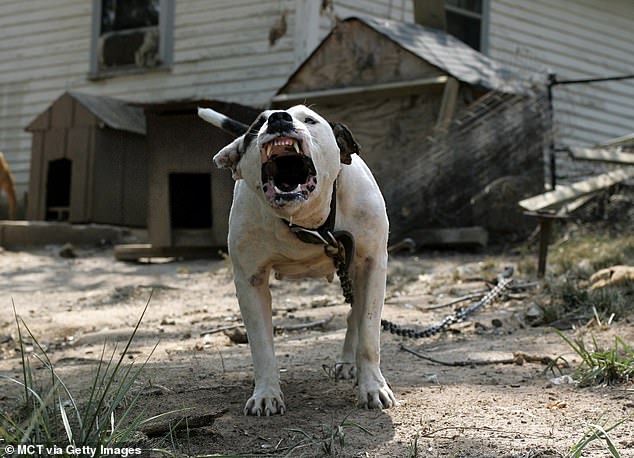 ‘Each violation was cited two times, one for each dog.

‘The dogs have been quarantined at home.’

Todd wrote on Facebook that the dog left three punctures although hadn’t got through to the bone.

‘I’m really messed up with these things. My eyes are going all weird,’ he said.

‘I can’t believe I’ve had six rabies shots. Three went directly in the wound, one in my arm and two in my butt cheeks. I can’t say it enough. If you’re a dog owner … you need a leash; you don’t let them ever go outside.’

The Ruckle family are advocates for tighter animal control laws including mandatory insurance for dog owners.

Another Wilmington resident named Diane Olin White lost her poodle Darcy when a stray pit bull set upon them in March. Her other dog, a boxer-mix named Stella, suffered puncture wounds but survived.