Stephen Wilson (pictured), the veteran’s father, demanded an explanation from the VA

The Salt Lake City VA has been forced to apologize after a veteran was confronted with a filthy clinical room when he went in for treatment.

Army Veteran Christopher Wilson, who served two tours in Iraq, had a podiatry appointment on April 5.

He was reportedly receiving injections for a service injury from one of his tours.

Mr Wilson was forced to wait 45 minutes before he was ushered into a room where he was confronted with medical supplies strewn across a counter, a bowl containing a plaster-like substance and a full garbage can.

The veteran took photos of the space which showed the extent of the disarray.

He said later there were ‘debris on the floor, a full garbage can, cutting tools, a soda cup on a counter and medical kits left open’.

He told KUTV: ‘I figured they would say, ‘Oh, this room’s not clean,’ and take me somewhere else, but they kind of just blew past it – didn’t acknowledge it.’

‘My son is a Veteran of the United States Army. He went to the #VA in Salt Lake City yesterday. This was the condition of the room he was seen in. Very unprofessional, unsanitary and disrespectful.

‘Maybe @realDonaldTrump will see it.’ 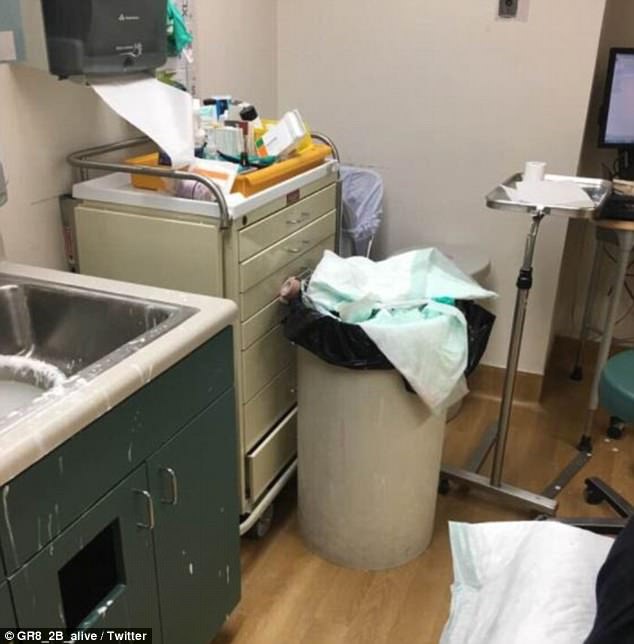 Christopher Wilson, who served two tours in Iraq, was confronted by a filthy clinical room when he visited the Salt Lake City VA for a podiatry appointment

On Twitter, Mr Wilson added he had been told by the VA clinic in Salt Lake City that it will ‘review policies’.

He also said he had been told by the VA that ‘sometimes medicine is messy’.

VA Salt Lake City, which provides vital services such as health and benefit programs to veterans, issued a response Sunday, apologizing for the man’s poor experience. 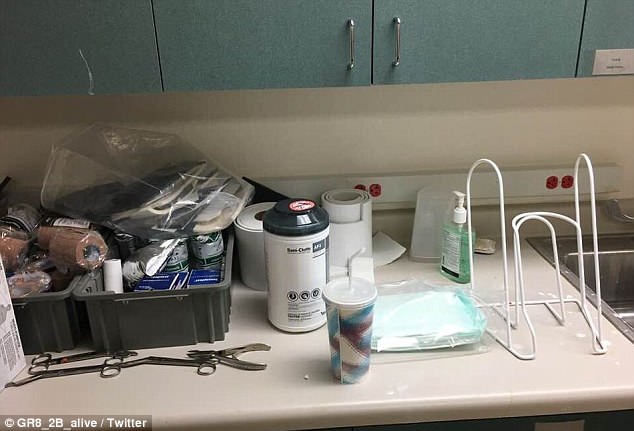 Medical supplies were strewn across a counter and a bowl containing a plaster-like substance sat in the sink, thought to be from a previous appointment where consultants treated patients with diabetic ulcers 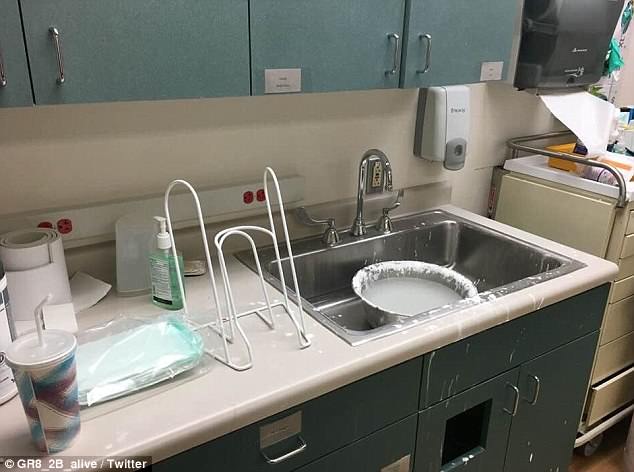 Unsanitary: What appeared to be a mixture of plaster and water covered various surfaces

The room the veteran was seen had in fact been used to apply casts to patients with diabetic ulcers.

The VA’s chief of staff Dr Karen Gribbin also responded. She has reportedly taken notes which may be used in an investigation into the incident.

‘I was taken aback by the condition of the room,’ she said.

‘Mr Wilson should not have been placed in that room in that condition,’ she admitted.

The VA said it takes safety seriously and will review its policies and procedures.