A Tennessee father has gone viral after publicly blasting parents who refuse to make their children wear face masks in schools, while shutting down those who use religion as an excuse to opt out of mask mandates.

Justin Kanew, 42, took to the podium at a local school board meeting earlier this week to passionately criticize anti-mask parents, accusing them of failing to ‘grasp the concept’ that face coverings should be worn in order to ‘take care of others’.

‘[My daughter] is five years old but she understood that concept, and it’s disappointing that more adults around here can’t seem to grasp it,’ he said, while also calling out the ‘sad’ people who are ‘using the Bible to get out of the mask mandate’.

‘Avoiding masks is not in the Bible but taking care of others is,’ he said, insisting that there is ‘no biblical justification’ for avoiding mask mandates.

Kanew’s speech to the Williamson County Board of Education came just days after furious protests erupted over the school board’s decision to reinstate mask mandates for students.

Days later, the state’s Governor, Bill Lee, issued an executive order that allows parents to opt out of school mandates – a decision which Kanew slammed as ‘government overreach’.

‘I didn’t plan on speaking today, but here we go,’ he began his speech, which has racked up more than one million views on Twitter.

He opened by introducing himself as a ‘dad in Williamson County of a new kindergartener’, explaining that his daughter’s first day at school came ‘right after the chaos’ of the mask mandate protests.

‘She went to school was one of just a few kids in her class wearing a mask, which made her ask me why she had to. My answer was “because we want to take care of other people”.

‘She’s five years old but she understood that concept and it’s disappointing that more adults around here can’t seem to grasp it.’

Many commenters on the now-viral video – which has been viewed over one million times on Twitter – are praising Kanew for protecting his daughter. One user replied: ‘Just wondering, where is his applause?’

Critics commented too and claimed Kanew’s points were under-researched and merely a ‘barf up (of) Facebook talking points’. 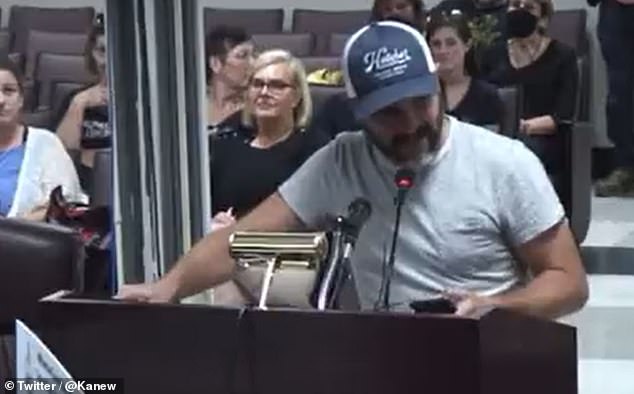 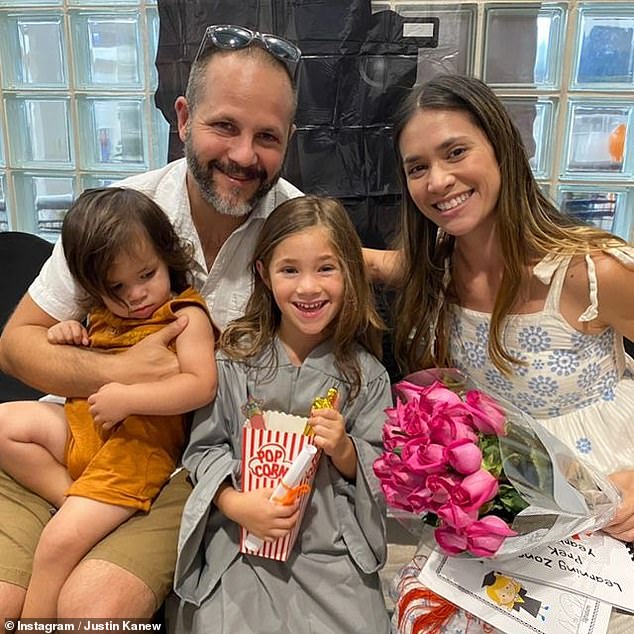 The chaos Kanew referred to was the anger that ensued after the previous school board meeting on August 12.

At the meeting a vote in favor of masks made it a requirement for all staff, visitors and students at the school to wear.

Anti-maskers got very heated at the result and were filmed outside the meeting venue harassing medical professionals and board officials who spoke out in favor of the mandate.

In the video you can hear a man shouting ‘we know who you are. You can leave freely but we will find you’.

One woman approached a masked individual and shouted, ‘Take that mask off,’ as the group chanted ‘No more masks’.

Another man yelled: ‘You are child abusers and there’s a place for you guys, there’s a bad place in hell for you guys and everyone’s taking notes.’ 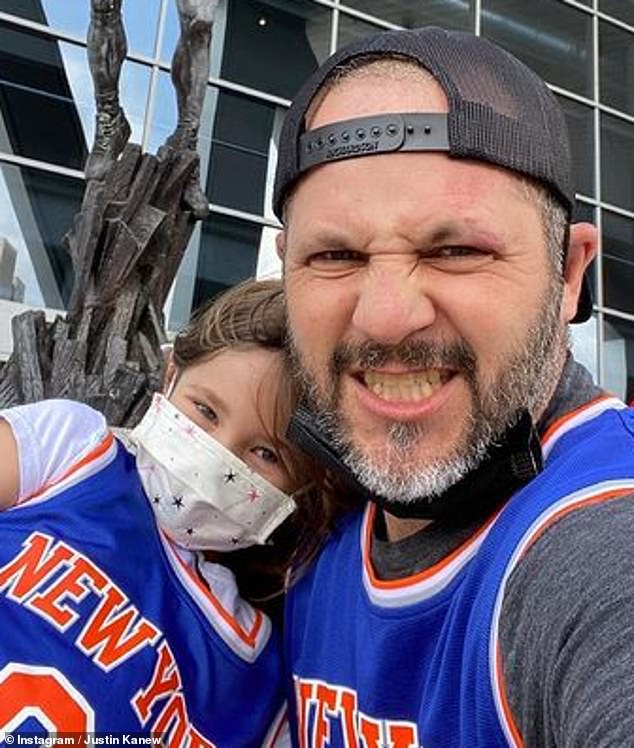 Kanew referred to the chaos that ensued after the previous school board meeting on August 12 when a vote in favor of masks made it required for all staff, visitors and students to wear 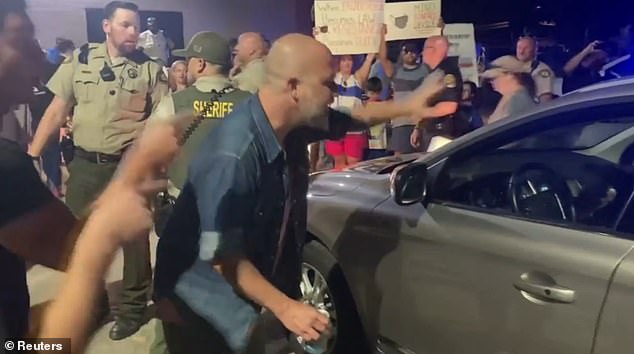 The following day, Tennessee governor Bill Lee issued an executive order giving parents across the state the ability to opt their child out of local mask mandates put in place by school or health boards.

He also remarked: ‘Critical race theory is not in our schools and it never was, and the people here to complain about it did not know what it was six months ago and had never heard of it.

‘That’s why they’re going after diversity, equity and inclusion (DEI) instead and trying to pretend they’re the same thing.’ 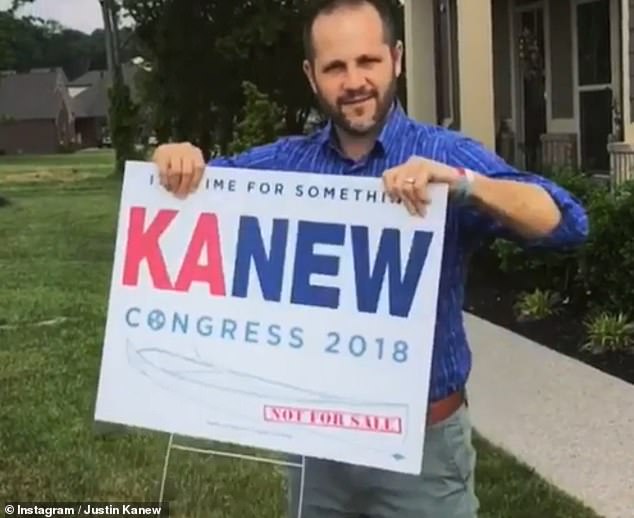 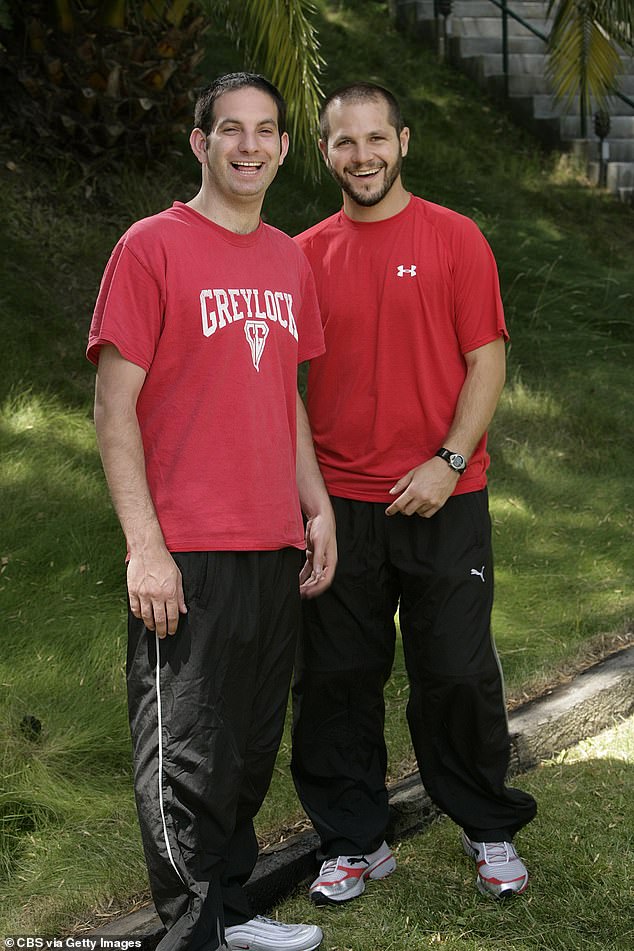 Kanew (right) is no stranger to public speaking or attention. In 2009 he finished in ninth place on The Amazing Race with his best friend Zev (left)

The impassioned father boldly added: ‘They aren’t. And frankly, there aren’t many communities around the globe that need DEI more than this one that we live in.’

Kanew also had a message for those claiming religious exemption from wearing a mask: ‘I asked a pastor friend of mine and he was very clear there’s no actual Biblical justification for using the Bible to get out of a mask mandate passed by the majority of this elected board.

‘But thousands are doing it anyway – calling it a religious exemption, which is frankly just sad. Avoiding masks is not in the Bible but taking care of others is.’

Kanew is no stranger to public speaking or attention. He was the Democratic candidate in the 2018 election for the US House to represent Tennessee’s 7th Congressional District.

And in 2009 he finished in ninth place on The Amazing Race with his best friend Zev. They even returned to the CBS show in 2011 and finished in fourth place. 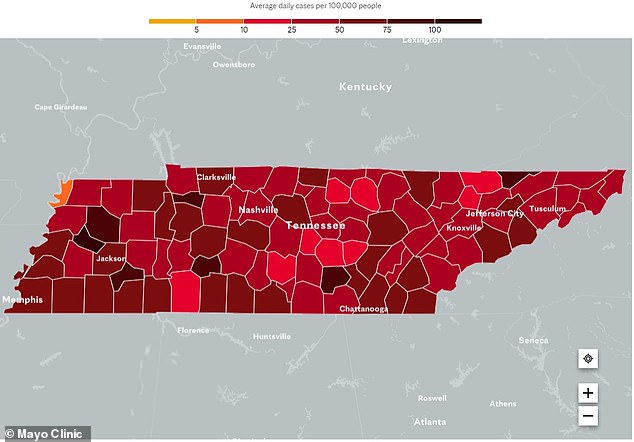 Tennessee is facing a 12.6 per cent Covid positivity rate with just 43.7 per cent of the total population receiving at least one dose of the vaccine and 38.9 per cent fully vaccinated

As the Delta variant contributes to an increase in Covid cases throughout the nation, school officials in states like Tennessee – where vaccine rates are low – fear an outbreak 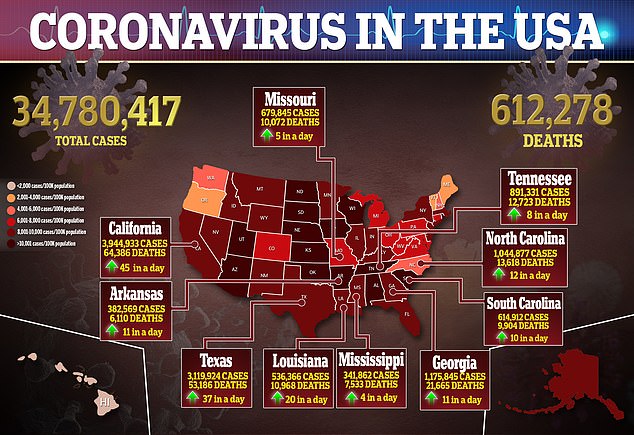 As the Delta variant contributes to an increase in Covid-19 cases throughout the nation, school officials fear an outbreak is on the horizon, especially in states like Tennessee where vaccine rates are low.

The state is facing a 12.6 per cent Covid positivity rate, according to Tennessee Department of Health data, with just 43.7 per cent of the total population receiving at least one dose of the vaccine and 38.9 per cent fully vaccinated.

But the Tennessee’s top immunization official, Michelle Fiscus, was fired on July 12 as she tried to encourage teenagers to get vaccinated, according to the Post.

She said in an interview that Tennessee Governor Bill Lee consistently resisted the state’s promotion of the Covid vaccine, saying: ‘I feel like the [health] department was gagged.’

As children across the state begin a new school year, the Tennessee Department of Health encourages parents to make sure routine vaccinations are part of that visit.

‘Vaccinations prevent the spread of diseases and outbreaks,’ said Tennessee Department of Health Commissioner Lisa Piercey, MD, MBA, FAAP. ‘Tennessee has always done well at ensuring routine vaccinations for both children and adults are up to date.

‘However, we know many Tennesseans got off-track with routine medical care during the pandemic and could be at risk for infection or disease, Piercey added.

However, children under 12 years old — roughly sixth-graders and younger — still aren’t eligible to be vaccinated.

Vaccine companies are still in the process of testing the shots’ effectiveness and safety for younger age groups, with a timeline for their approval being unclear.