‘This is a reflection of the unforeseen paradise in the future,’ Father Ralph chimes as we sit on the veranda of his humble little home on Karkar island in Papua New Guinea and he gestures to the surrounding scenery.

With the sound of the waves lapping towards the shore, palms rustling in the wind and birds chirping around, I can see what the 47-year-old Indian priest means. It is indeed pretty idyllic.

I’d ended up on the remote island of Karkar to track down my great uncle who had moved there more than 40 years ago to set up a coconut plantation but Father Ralph – who is originally from the crowded city of Hyderabad –  had landed on the off-grid volcanic outcrop as a result of his job.

Father Ralph took charge of the Catholic church on the off-grid island of Karkar on May 12 last year. He is originally from the crowded city of Hyderabad in India and he spent years enrolled in religious studies. Above, he poses with members of his congregation as they take part in a traditional ceremony celebrating the inauguration of a new priest in the area

The teardrop-shaped isle – which measures around 25km long and 19km wide and has an average year-round temperature of 28 degrees Celsius – is remote in the truest sense.

It takes five hours to get to the island by cargo boat from the mainland, crossing the Bismarck Sea or you can take a speedboat at your peril, as the waves have been known to wash people overboard.

Then there is no mains electricity or water supply on the island but some houses, including Father Ralph’s, have generators and tanks to collect rain water.

The infectiously-jolly preacher took charge of the Catholic church in the small village of Tabel on May 12 last year. 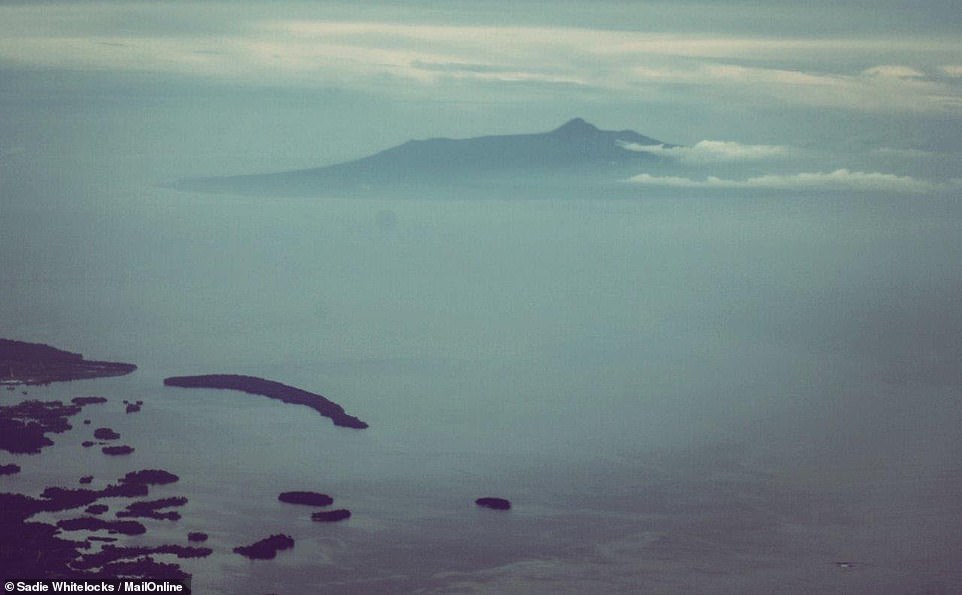 The teardrop-shaped isle – measuring around 25km long and 19km wide – is remote in the truest sense. Above, a view of Karkar flying from Madang to Port Moresby 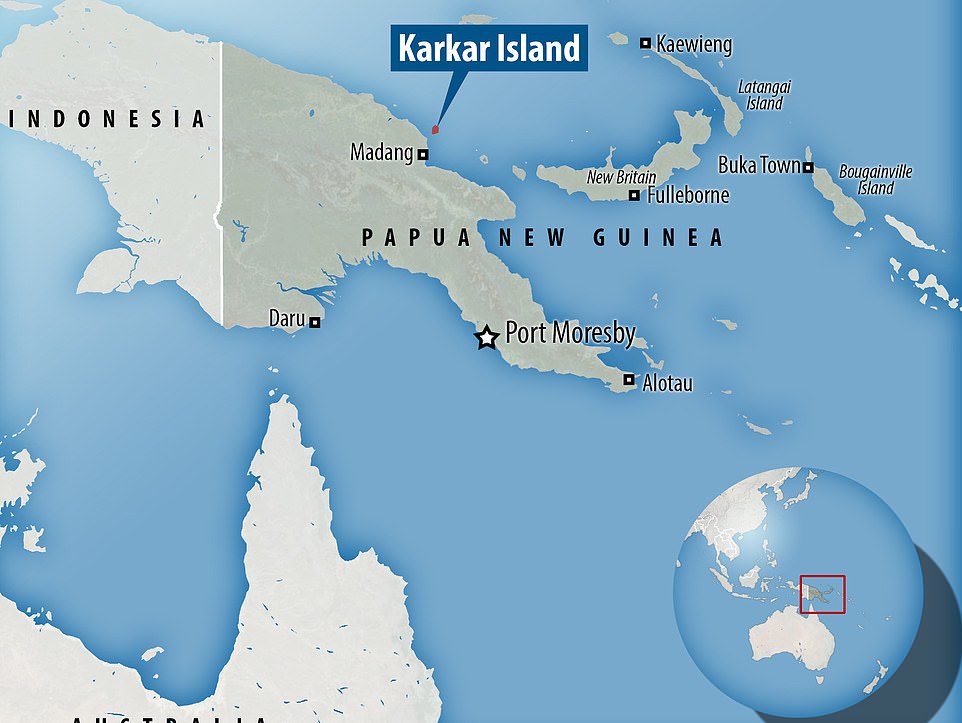 It takes five hours to get to the island by cargo boat from the mainland, crossing the Bismarck Sea or you can take a speedboat at your peril, as the waves have been known to wash people overboard

The church complex includes a church made out of breeze blocks, a parish hall, a grassy field for events, a house for the nuns and another for Father Ralph.

The buildings are situated right on the coast, with Karkar’s active volcano looming behind.

Father Ralph told me that the last priest joked his house was ideally placed if a volcanic eruption were to occur – but not so ideal in the event of a tsunami.

He told me that he’d trained as a priest for many years in India and spent 12 to 15 years enrolled in religious studies.

Explaining what drew him towards the church he said: ‘Around the age of 17 I started to reflect and think about my vocation in life. 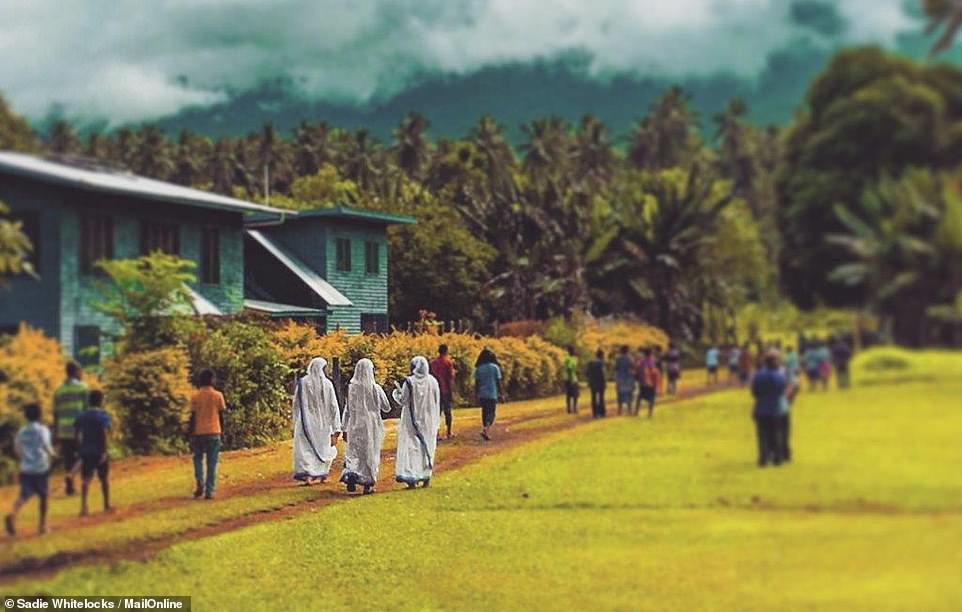 The church complex includes a church made out of breeze blocks, a parish hall, a grassy field for events, a house for the nuns and another for Father Ralph. Above, three nuns make their way back home after a service 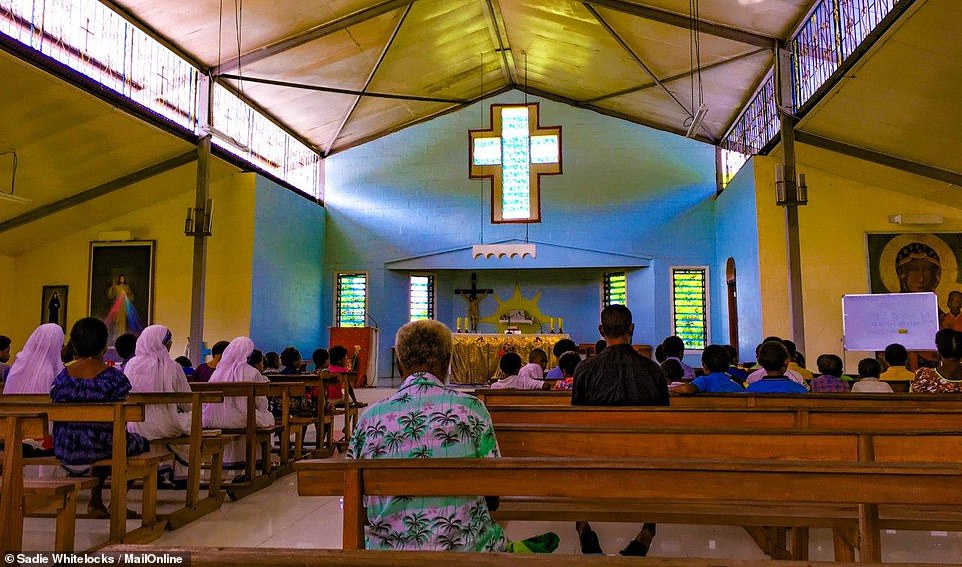 Father Ralph trained as a priest for many years in India and spent 12 to 15 years enrolled in religious studies. Above, the church on Karkar island which he now runs

‘There were so many worries ahead and I thought about what was going to give me meaning in life.

‘I shared my feelings with my aunt and she advised me to talk with the priest. He was skeptical because we were quite westernised as a family. He sent me away but I persisted. Finally, before my school exams I told my father I wanted to find meaning in life and serve the poor.’

After proving his dedication to the Catholic church, Father Ralph, became a priest for the Pontifical Institute of Foreign Missions (Pime).

This organisation includes a group of priests who dedicate their lives to missionary activities overseas.

After completing his training, Father Ralph was allowed to choose three locations where he wanted to serve, placing these in order of choice.

He picked Cambodia and the Philippines but his number one choice was Papua New Guinea. He said he was drawn to Papua New Guinea because he was inspired by a story about blessed John Mazzucconi, the very first martyr of the Pime Fathers. 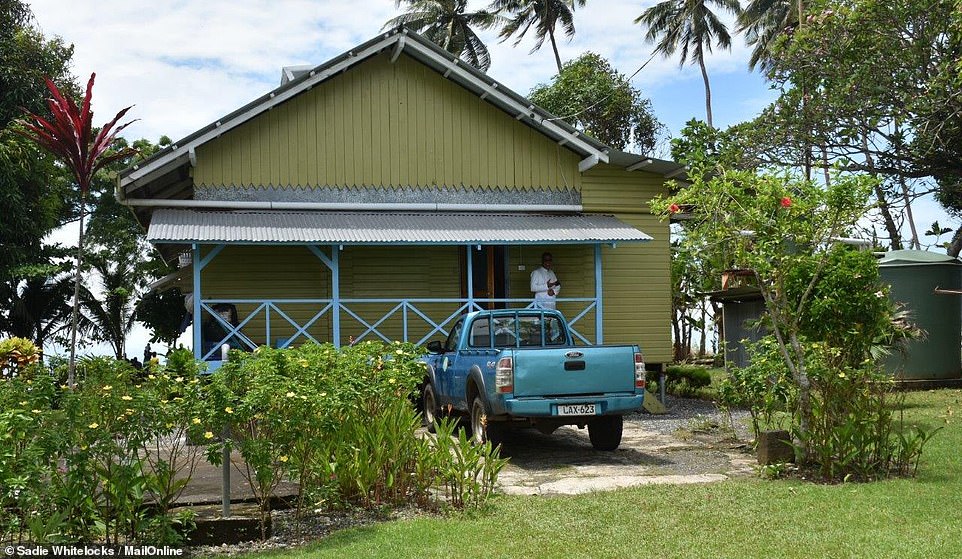 A view of Father Ralph’s house, which sits next to a black sand beach on Karkar island

Blessed John was sent to Papua New Guinea with four other priests in 1852 but he was later killed with an axe by one of the locals. While this story would send most people running the opposite direction, Father Ralph wanted to learn more about this foreign and untouched land.

His deployment overseas was delayed for a number of years, and he was sent to an area of India to do work there instead.

But eventually, after trying his hand at various roles within the church, he was allowed to go to the country he had always dreamed of going.

Before landing on Karkar, he went to the highlands of Papua New Guinea, where he remembers a less idyllic scene.

‘The people were very excited as they hadn’t had a priest for three years, so that welcome was nice but the house I moved into was interesting!

‘There was no crockery and it was full of stinging bees, rats, lizards and cockroaches. It was like the Jungle Book! Luckily in the end, we got the place disinfected and cleaned and it turned out to be a palace.’

Father Ralph said he never wanted to live on an island, but when he was asked to go to Karkar he had no choice. 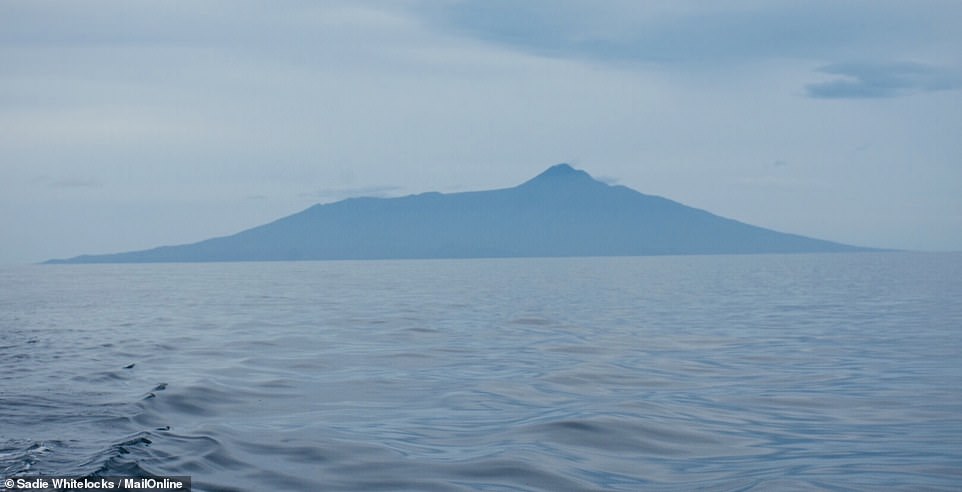 Father Ralph said he never wanted to live on an island, but when he was asked to go to Karkar he had no choice. But now, after more than half a year he’s warmed to the paradisaical surroundings. He mused: ‘I’m really happy here and it’s allowed me to be detached from town life’

But now, after more than half a year he’s warmed to the paradisaical surroundings. He mused: ‘I’m really happy here and it’s allowed me to be detached from town life.

‘Here you have your provisions and you manage with what you have. I catch the boat to go to town on the main and once a month. But I’m peaceful here and I’ve had no trouble so far.’

While it all sounds very dreamy, Father Ralph recognises that he has many challenges and not everything’s perfect on Karkar.

‘There is petty theft sometimes, as the concept of stealing isn’t really understood. The population is also rapidly increasing here as women are having children as young as 14 years old. There is also the drug, verbal and sexual abuse which isn’t talked about and covered up.

‘My hope is to help educate young people here about the importance of going to school and having aspirations.’

So, when it comes to ‘island life’, what are Father Ralph’s essential possessions?

He simply replies: ‘I’m not worried about food. All of the trees around here are dripping with fruit and resources are aplenty. My most important things are my mass kit, containing sacred vessels and essential liturgical items, a little light and two sets of clothes are handy.’

And with that, the priest bids a farewell and ventures off to start his day on this remote little island. A spot where he now feels truly blessed to be.

Sadie booked flights to Papua New Guinea via www.flightgiftcard.com which allows family members or friends to contribute towards travel costs by sending an e-card. She flew with Philippine Airlines from London Heathrow to Port Moresby via Manila.

To get to Karkar, you can take a one-hour flight from Port Moresby to Madang with Air Niugini and there is a passenger ship in Madang with tickets starting from 40 kina (£9.08).

There is a guesthouse on Karkar run by the Goodyear family which can be booked by emailing barbara.goodyear77@gmail.com. Rates start from 50 kina (£11) a night.

Recommended hotels in Port Moresby include The Stanley, which is in the downtown area, and the Gateway Hotel which is located close to the airport.