Michael Hunn killed his two teenage children before turning the gun on himself, police say

An Indiana father killed his two teenage children and himself between Thursday night and Friday morning, leaving his ex-wife to find out only when the school called to check on the kids.

Shelby and Harrison Hunn, 13 and 15, were staying with their father Michael on Thursday, and stopped contact with their mother Stephanie Reece late that night, police said.

Reece received a call from her children’s school about 9.35am on Friday, alerting her they were not in class, and after multiple failed attempts to reach Hunn and their children, she drove to his home.

When nobody answered the door, Reece called 911 to have police check in on her family.

Officers responding to the call walked in to see Hunn, 50, dead from a self inflicted gunshot wound, and his two children dead in their respective beds, also from gunshot wounds.

Police are yet to find a motive for the heartbreaking double-murder-suicide, and are continuing to investigate. 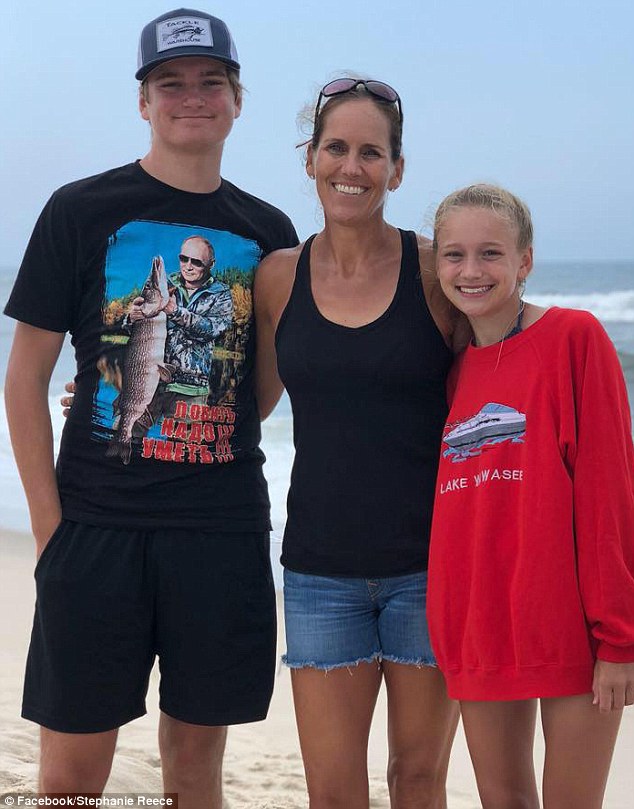 Hunn murdered his son Harrison (left), 15, and daughter Shelby (right), 13. Their mother, Stephanie Reece (pictured) only discovered the tragedy when the teenagers didn’t show up for school on Friday

‘We all have faced yet another tragic event here in Boone County,’ a statement from the Boone County Indiana Sheriff’s Office read.

‘Our hearts and prayers go out to all of the family, the community, Zionsville Schools, and the public safety personnel that responded.’

Police say the Reece and Hunn divorced in 2017, and while officers were not aware of any previously violent behavior, Reece had expressed concern over her ex’s drinking. Police say they do not know why Hunn killed his children, but an investigation into the double murder suicide is ongoing

The mother-of-two petitioned the court to see Hunn’s time with the children last December, as he had reportedly been drinking to excess.

In court documents obtained by the Indy Star, Shelby and Harrison were removed from Hunn’s home after telling their grandmother their father was too drunk to care for them or drive them anywhere.

Reece had also requested Hunn be compelled to use a breathalyzer, which he agreed to.

The pair also battled over child support, with Hunn due in court on September 28 for failure to pay.

Harrison and Shelby’s schools issued a statement offering their condolences to Reece and her family, and alerting parents counselors would be available at the school.

‘Our entire school community grieves the loss of two students due to a tragedy at their home,’ Zionsville Community Schools Superintendent Scott Robison said in an email to parents.

‘Our thoughts and prayers are with the family of the children whose lives were lost, and we ask that you join us in respecting their family time to grieve.’