When Anni Bales bought a waterfront house in the pretty Kent town of Faversham it seemed the perfect place to enjoy a quiet and, most importantly, private retirement.

But 15 years on, her plans have been shattered after the council decided to build a footpath only 27 inches from her front door.

Now Mrs Bales, 70, is among 37 homeowners locked in a David and Goliath battle with Kent County Council over a plan to build one of Britain’s costliest footpaths alongside their front gardens.

Construction of the 360-yard path beside Faversham Creek has not started but an estimated £80,000 of taxpayers’ money has already been spent on planning and legal fees, with another £140,000 earmarked for the project. 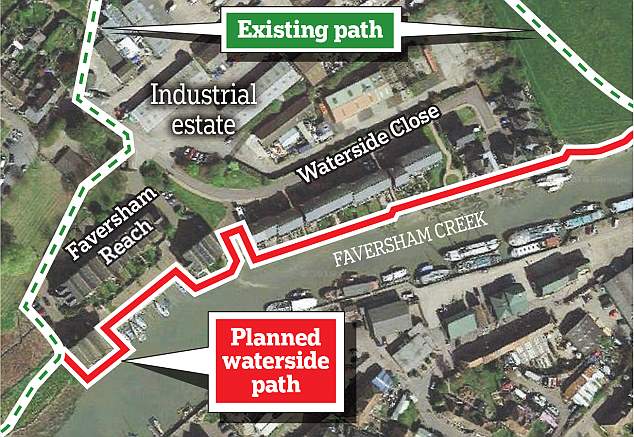 Construction of the path has not started but it has already cost £80,000 in planning – and this could spiral to £4.5m once compensation for the decreased value of the residents’ £500,000 homes is taken into consideration

Experts say the cost could spiral to £4.5million once compensation for the decreased value of the residents’ £500,000 homes is taken into consideration – making the footpath more expensive per yard than some motorways.

Supporters of the footpath say it will provide a picturesque walk along the waterfront, but those in the gated, walled housing developments of Faversham Reach and Waterside Close say it is a ‘scandalous waste of public money’ that will take away their privacy.

Mrs Bales, who lives with husband Michael in her three-bedroom home, said: ‘The council is trying to nick our land without offering us a penny of compensation. They can’t afford to mend our potholes or re-open our stroke unit, but they can afford to build the most expensive bit of footpath in our history.

‘There is a perfectly good existing footpath running from exactly the same start and finish points. But instead of doing the sensible thing and keeping that open they have embarked on a vanity project and taxpayers are having to cough up.’

Astonishingly, the path will have to be built by boat because the contractors have not been granted access to the residents’ private land, adding to its cost.

The locals have already spent £20,000 defending their property. After a public inquiry ruled against them in January, they now face a costly High Court case if they are to overturn the footpath plan.

One of those hit is former Monty Python cameraman John Wellard, 73. ‘Sadly, this footpath situation is almost beyond satire,’ he said. ‘Faversham has a population of 20,000 but it can’t even afford a police station and Kent council is in a parlous financial situation.’

David and Elaine Pollock, who run a barge charter business from the private mooring outside their Faversham Reach home, fear they will have to move house because the footpath will make their barge vulnerable to crime. 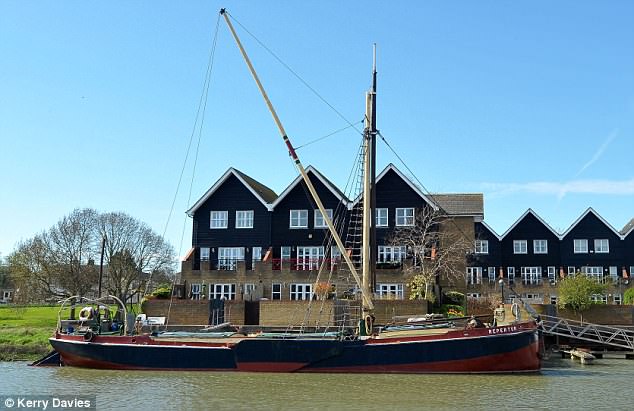 David and Elaine Pollock, who run a barge charter business from their private mooring (pictured), fear they will have to move house because the footpath will make their barge vulnerable to crime

Consultant Andy Dunlop, who gave legal advice to the residents, said: ‘I have never seen a more ridiculous or expensive footpath in 30 years working on rights of way.

‘The true cost can’t be established yet, but it could easily top £4.5million if residents are compensated for 10 per cent of the value of their homes, which itself a conservative estimate. You can build motorways for less per yard.’

In January the county council increased council tax by 5 per cent, the highest possible increase, saying it was ‘fast reaching the point where frontline services are now threatened’.

The project is backed by the county council, Swale Borough Council, Faversham Town Council and some local charities. They say a long-forgotten towpath across the land is a public right of way.

But the towpath has remained unused since 1938 when the site was a shipyard, and residents say they were not told of its existence when they bought their houses.

The county council said: ‘A number of objectors at the inquiry emphasised the case for compensation. We believe that any claims are unlikely to be sizeable and that the figures mentioned by objectors are wide of the mark.’