The FBI and the Parkland Police Department both received warnings about confessed school shooter Nikolas Cruz weeks before he killed 17 people at his former Florida high school.

The 19-year-old was also heard apologizing to Parkland police in a 911 recording following a violent outburst at his trailer park home during which he punched walls and broke items because his guns had been taken away from him.

According to a transcript obtained by the New York Times, a woman called the FBI last month to tell them that Cruz had a lot of guns and ammunition and she was worried he might be ‘getting into a school and just shooting the place up.’

‘I know he’s going to explode,’ the woman warned in a call to the bureau’s tip hotline on January 5. 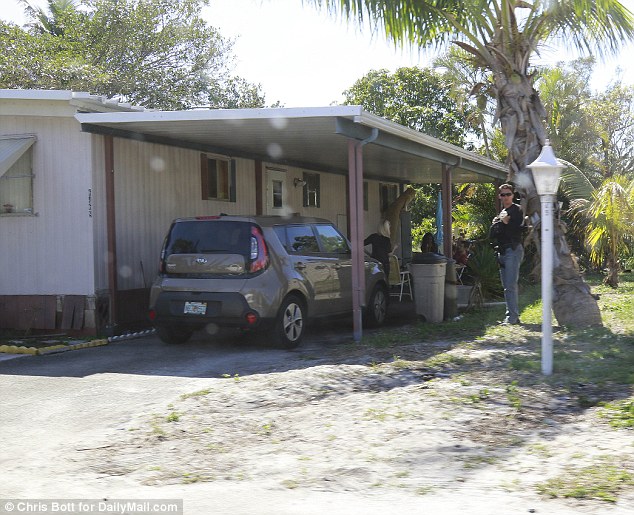 Months before the killing, Cruz had gotten into a violent altercation at the Lantana mobile home he was staying at 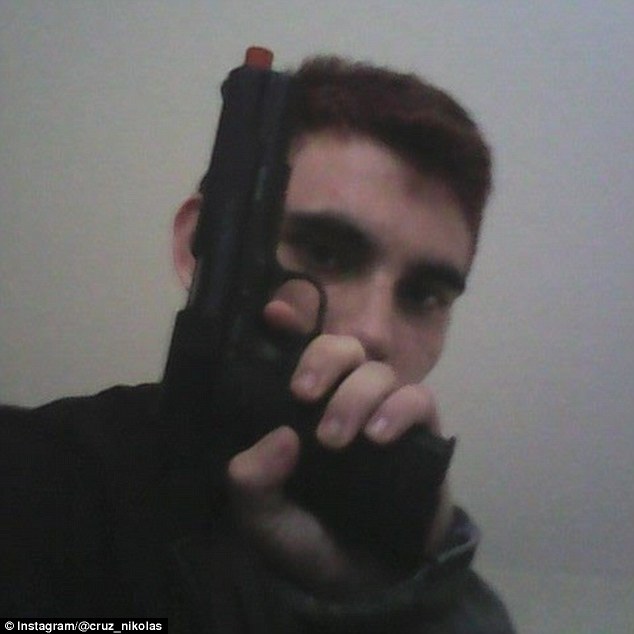 Cruz told police that he became upset when he misplaced a photo of his mother, who had recently died

The tipster, whose identity was redacted from the transcript, said Cruz had been adrift since his mother’s sudden death from the flu in November. She also provided the FBI with four Instagram accounts she said was associated with Cruz and contained images of guns and sliced up animals.

The woman said that Cruz purchased the weapons with money he received from his mother’s life insurance policy.

A federal official told the Times that FBI deputy director David L Bowdich briefed congressional staff about the call on Friday acknowledging that the bureau failed to investigate the tip.

The caller also contacted the Parkland Police Department before she reached out to the FBI. The woman was worried Cruz was going to kill himself, but she didn’t hear back from the department. She said she was also concerned about a post he wrote online saying ‘he wants to kill people’.

It was also revealed that the Broward County Sheriff’s Office, which staffs Parkland Police, received a similar call in November from someone in Massachusetts. That person told deputies that Cruz ‘could be a school shooter in the making’.

Two deputies have since been placed on restricted duty while the office investigates how both calls were not investigated.

The anonymous tipsters weren’t the only ones concerned about Cruz’s behavior.

On November 28, the Palm Beach County Sheriff’s Office received a call from Roxanne Deschamps, the woman who took Cruz and his younger brother in after their mom died.

Deschamps told police that Cruz became violent when she took away his guns and ammunition and he started punching walls and breaking items in their Lantana Cascade mobile home. 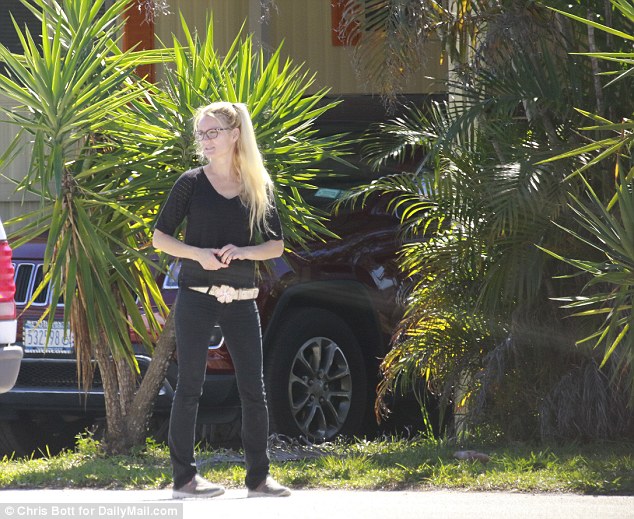 Roxanne Deschamps (pictured) told police that Cruz became violent because she took away his guns and ammunition. She said Cruz left the home following the altercation and she feared what would happen if he returned 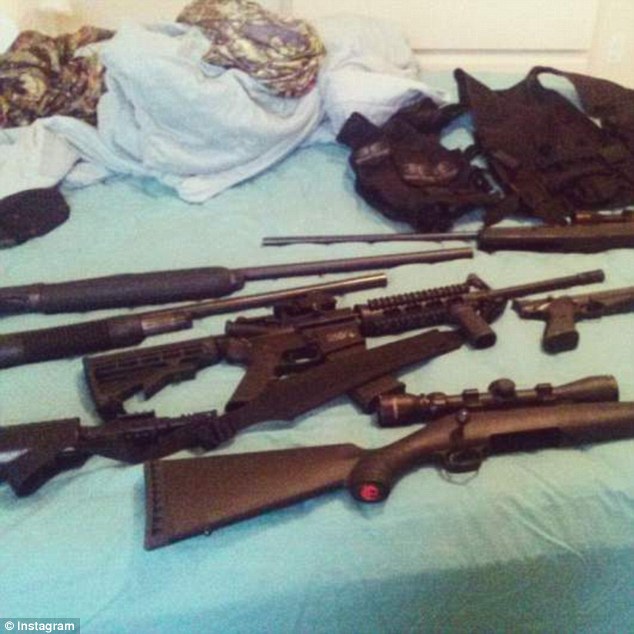 A woman also called the FBI last month warning them that Cruz could be dangerous and he had a lot of guns. Pictured is an Instagram photo Cruz posted of his gun collection 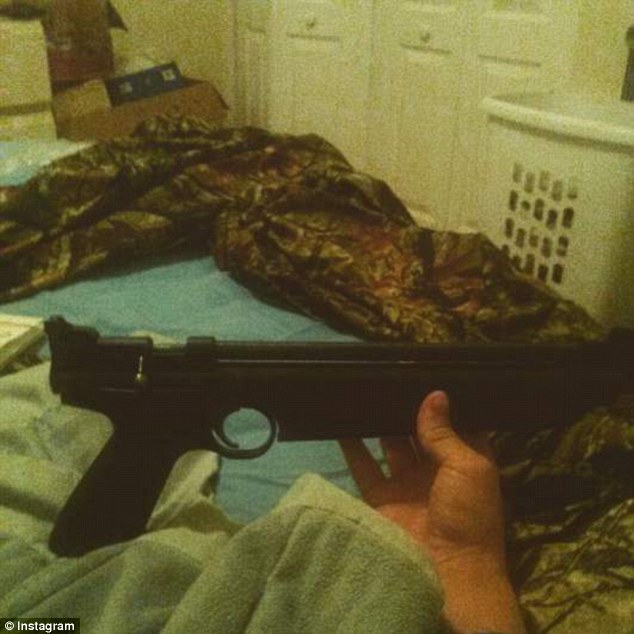 The caller told the FBI that she was concerned about a post Cruz made saying he wanted to kill people. The woman’s warning was never investigated by the FBI 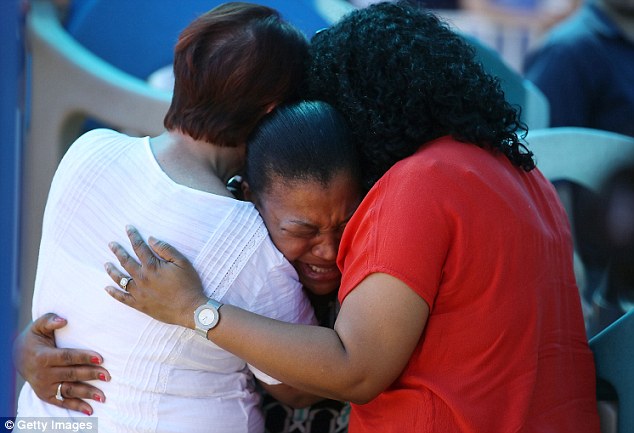 A woman breaks down during a prayer vigil for the families of Marjory Stoneman Douglas High School, where 17 people were killed

‘Because that’s all he wants is his gun,’ Deschamps said, according to records obtained by the Miami Herald. ‘That’s all he cares about is his gun, and he bought tons of ammunition, bullets and stuff, and I took it away from him.’

Deschamps said her 22-year-old son, Rock, tried to calm Cruz down and the teen allegedly punched Rock in the face. Cruz then abruptly left the home.

Deschamps told police that she feared what would happen if he came back to their house.

‘I’m afraid if he comes back, and he has a lot of weapons, and he has a weapon that he is going to get at Dick’s (Sporting Goods) right now because he purchased it,’ she said.

‘He put the gun to the head of his brother before, so this is not the first time, and he did that to his mom.’

While Deschamps was speaking with police, Cruz had called 911 to report the incident. In a recording released Friday he’s heard telling the dispatcher that he was attacked and the person who hit him threatened to ‘gut’ him.

‘The thing is I lost my mother a couple weeks ago, so, like, I’m dealing with a bunch of things right now,’ he told the operator.

Police later found Cruz in a neighborhood park. In a police report, the responding deputy wrote that the teen ‘appeared nervous and calm’ and said he had become upset ‘because he misplaced a picture of his mother who recently passed away’.

Cruz is currently being held on 17 counts of premeditated murder after he opened fire at Marjory Stoneman Douglas High School in Parkland on February 14. 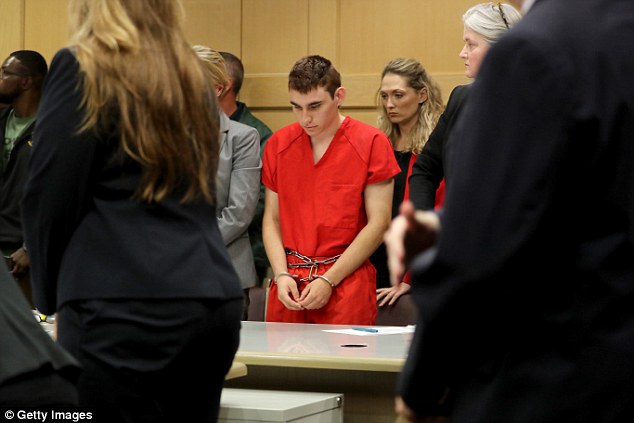 Cruz was arraigned on 17 counts of premeditated murder