FDA cracks down on e-cigarettes with child-friendly packaging

The Food and Drug Administration (FDA) has axed the sale of 15 child-friendly e-cigarette devices shaped like toys and featuring popular cartoon characters.

Five companies are accused of using popular imagery from TV shows such as The Simpsons, Squid Game, Rick and Morty, and Family Guy to market the vapes to children and teens.

Other devices highlighted by the FDA are shaped like Nintendo Gameboys, popsicles, bananas or feature animals from children’s cartoons like BabyBus.

A report published last month by the Centers for Disease Control and Prevention (CDC) found that 2.6million US middle and high-schoolers use e-cigarettes.

The five manufacturers warned Wednesday — Wizvapor, R and M Vapes, Shenzen Quawins, Ruthless Vapor, and Moti Global — are based in China, Canada and Hong Kong. They must stop selling the products in the US immediately.

Dr Brian King, director of the FDA’s Center for Tobacco Products, said ‘the designs of these products are an utterly flagrant attempt to target kids.’

It is yet another example of the agency cracking down on teen vape use in America as use of the devices reach a near-epidemic level.

More than four-in-five teen vapers reported using flavored devices – which the FDA has also cracked down on in recent years for marketing to children.

The FDA reports that it has now issued around 500 warning letters to companies accused of selling illegally marketed tobacco products.

The FDA issued warnings to five companies, accusing them of marketing their vape products to children and teens by shaping them like toys or featuring cartoon characters on the packaging 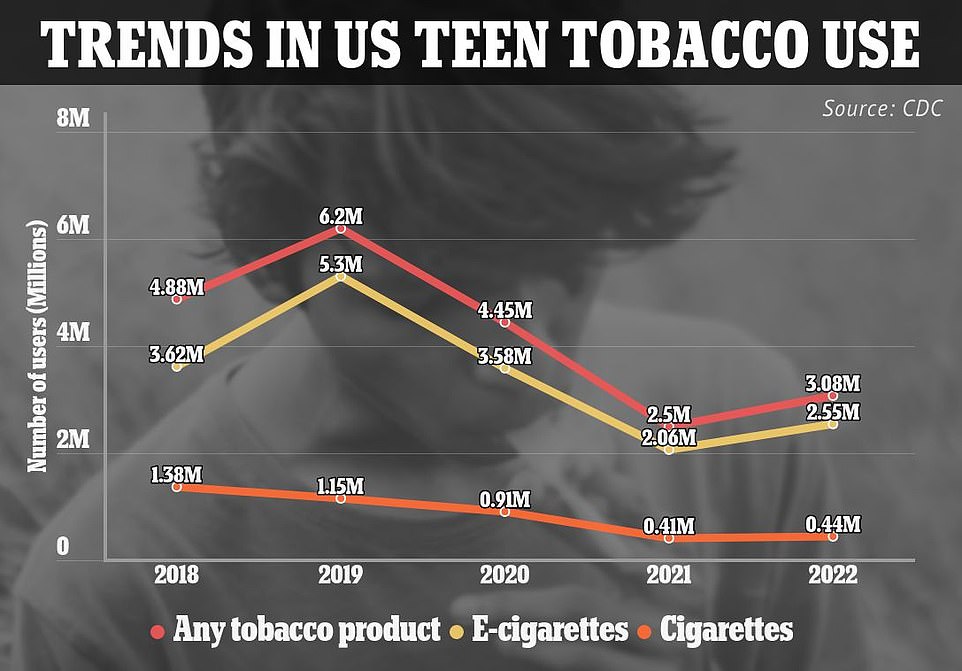 Tobacco use among 11 to 18 year olds has risen by almost a quarter compared to last year, estimates suggest. The CDC warns, however, against the comparison because in 2021 the surveys had to be done from home due to the pandemic. This may have affected the results

‘The FDA is committed to keeping tobacco products out of the hands of our nation’s youth,’ said Dr King.

‘The agency will continue to hold companies accountable for illegally selling e-cigarettes, particularly those that shamelessly target youth.’

In each letter, the agency notes that companies that are considered ‘new’ tobacco product manufacturers – meaning they arrived on the market after 2007 – must receive approval from it to sell flavored tobacco products.

Under this system, which was established last year, firms must submit a detailed plan to the FDA as to how they plan to avoid letting their products get into the hands of children.

It was because of this policy that the popular Juul products were removed from US markets in June. They have been allowed to stay on the market temporarily while the company’s appeal is pending.

Vapes are not allowed to be purchased by Americans under the age of 21, the same age restriction placed on cigarettes and alcohol.

Many children still manage to get their hands on the devices, whether through fake IDs, lax policies at smoke shops or by being purchased by another person.

Ruthless Vapor is based in Ontario, Canada. The FDA cites its banana-shaped disposable products as ones that are marketed towards children.

They are sold in flavors such as mango banana ice, banana ice and strawberry banana ice.

Wizman Limited, which operates under the name Wizvapor, is a Hong Kong-based firm accused by the FDA of selling tobacco products without approval.

The agency reports that products called ‘Puff Boy’, ‘Mini-Beeper 2.0’ and ‘Walkie Vape’ are all available for American consumers to purchase on the company’s online shop.

These devices also mimic the appearance of a classic Nintendo Gameboy, a pager and a walkie talkie.

R and M Vapes, which is a part of the company Shenzhen Fumot Technology, based in China, is also among the brand name and shamed today.

Its products were found to use packaging and devices that feature characters from ‘The Simpsons’ , ‘Squid Game’, ‘Family Guy’ and ‘Rick and Morty’.

China-based Shenzen Quawins Technology is under fire from the FDA as well.

The firm is accused of selling products that resemble glow sticks and feature characters from the Chinese cartoon BabyBus.

The latter is a popular YouTube channel that features cartoons for children as young as six months old.

Finally, Moti Global is another Chinese firm that was sent a warning from America’s leading regulatory agency.

It was warned over its ‘lush ice’, ‘juicy grape’ and ‘strawberry ice cream’ flavored vapes that are shaped like popsicles.

Many firms that manufacture vapes market them under the guise that they are tools to help a person ween off of cigarettes. The FDA says otherwise, though.

‘It’s a hard sell to suggest that adults using e-cigarettes with the goal of quitting smoking need a cartoon character emblazoned across the front of the product in order to do so successfully,’ Dr King said.

If the firms warned by the FDA fail to stop selling the products without regulatory approval the agency warns of ‘actions such as an injunction, seizure and/or civil money penalties.’

The warnings come after the a joint FDA and Centers for Disease Control and Prevention (CDC) study found that 3million US teens use tobacco products.

Students who used the drugs were most likely to perform badly in school or identify as a part of the LGBT community.