With more than two million Americans struggling against opioid use disorder, supplement companies are increasingly profiting off suffering addicts.

Medications like buprenorphine, methadone and naloxone are approved by the FDA and research has shown how effective and beneficial they can be to addiction recovery, but the sham drugs pose as cheaper alternatives.

At prices ranging from $15 to $60 per bottle, the supplements are tempting alternatives to approved treatments like methadone, which costs an average of $47,000 a year for each patient.

The FDA and the FTC are joining forces to try to eliminate the bogus drugs, which they say interfere with addicts’ ability to get proper treatment. 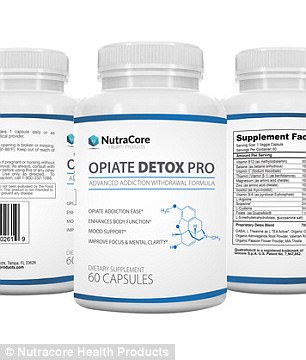 The agencies are ‘increasingly concerned with the proliferation of products claiming to treat or cure serious diseases like opioid addiction and withdrawal,’ said FDA commissioner Scott Gottlieb in a press release.

The sham treatments claim to soothe common withdrawal like symptoms like anxiety, insomnia, stomach cramps and aching at lower costs than drugs approved by the FDA to do so.

But even with cheaper products, people in need are ‘going to spend money in the hope that this stuff will work, instead of spending it on treatment,’ said Patricia Allen, a psychiatric nurse and the executive director of medical services at Summit Behavioral Health in Pennsylvania.

She says that about six times a year, she and her colleagues will discover someone in one of their programs is thinking about or already taking these sham supplements.

‘Their behavior is different from the last day and…they’re acting like they’re under the influence,’ yet their drug screens are clear.

Allen says that these unproven alternatives ‘may look appealing, but they can be very dangerous.’

Because they have not gone through rigorous trials and FDA approvals, it is not clear what the negative health impacts of the pills could be, except that they have appeared to have some intoxicating effects, from Allen’s account.

More worrisome to Allen is the fact that the sham drugs ‘become a barrier to someone vulnerable that’s in that window of opportunity where they want help.’

Federal agencies’ efforts against sham medications and supplements come a month after officials in New York launched their own crusade against fake addiction treatment centers.

Most US agencies and rehabilitation centers recommend medically assisted treatment (MAT) for addiction.

Treatment begins with detoxification, a period when the body purges itself of substances that are expelled through sweat, urine, feces, and exhaled air.

During detoxification, addicts suffer through withdrawals from opioids, leading to uncomfortable and often intense shaking, aches, stomach upset, pain sensitivity, anxiety and insomnia that drive some to the edges of their sanity.

Opioid withdrawals can be particularly intense, often driving people to turn back to the drugs they are trying to give up and even leading to medical issues.

The FDA-approved medications ease the transition away from illicit or high-dose prescription drugs, smoothing the edges of withdrawal so that the body can slowly and safely become accustomed to incrementally smaller amounts of substances on the way to abstinence.

Naloxone, methadone and buprenorphine all fill the same receptors that opioids do, tricking the body into thinking that it has gotten its fix and curbing cravings. 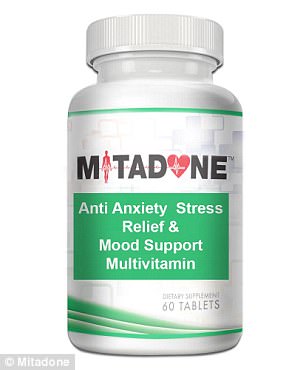 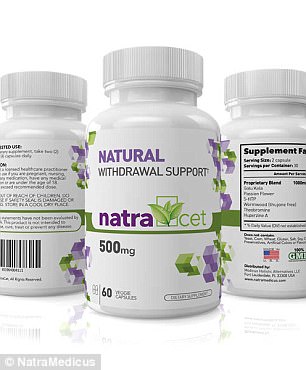 Homeopathic medicines like Mitadone (left) and Natracet (right) contain no ingredients that are proven to act as opioid antagonists, the FDA warns

But the opioid epidemic has been used as an economic opportunity for investors, rehabs and makers of homeopathic medicines and supplements.

When Allen recently found that one of Summit’s patients had some of these fake pills, ‘nothing on the ingredients list stood out,’ as being known opioid

These supplements primarily contain plant and herbal ingredients that the FDA says have no proven benefits for treating addiction, meaning their makers profit on prolonging the suffering of people seeking to break their debilitating addictions.

‘People who are addicted to opioids should have access to safe and effective treatments and not be victimized by unscrupulous vendors who are trying to capitalize on the opioid epidemic by taking advantage of consumers and selling products with baseless claims,’ said Dr Gottlieb.

The Food and Drug Administration called out 11 companies that claim to make products that can ease withdrawal symptoms.

The companies, including Opiate Freedom Center, U4Life, CalmSupport and TaperAid are all sold online, where they use illegal false advertising and empty claims to entice customers.