An FDNY diversity official has said that it’s ‘most definitely’ acceptable to keep a white firefighter off a ceremonial unit based on his skin color, according to a new report.

The New York Post reported that the FDNY’s chief diversity and inclusion officer, lawyer Cecilia Loving, has defended a decision that allowed white firefighter Lt. Daniel McWilliams to be kicked off a color-guard procession so it would be all-black instead.

Loving’s statement was allegedly made while she testified at a New York state Division of Human Rights trial following McWilliam’s complaint that he was the victim of racial bias during a 2017 incident.

FDNY Lt. Daniel McWilliams (third from left) filed a lawsuit claiming racial bias after he was prevented from being a flag-bearer in a color guard because he’s white 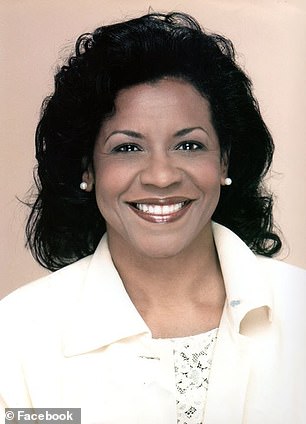 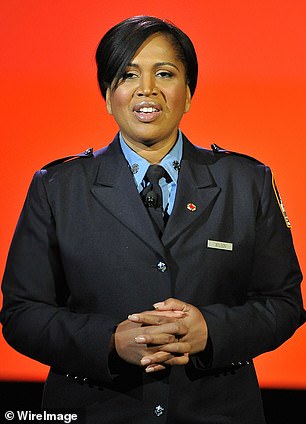 McWilliams was one of the three FDNY firefighters seen in an immediately iconic photo as they hoist the American flag at Ground Zero in the days after the 9/11 attacks.

According to McWilliams’ complaint, he been selected by the FDNY Ceremonial Unit to serve as one of the flag bearers in the color guard at a November 2017 memorial mass honoring deceased members of the Vulcan Society, a fraternal society of black firefighters.

Being a flag bearer at the event was an ‘esteemed honor and privilege’ for McWilliams, according to his lawsuit, CNN reported.

Upon his arrival at the event, however, McWilliams was barred from participating in the color guard by then-Vulcan Society president Regina Wilson because she allegedly had asked for an all-black color guard at the mass.

She then asked McWilliams – a 29-year FDNY veteran – to ‘help in a different capacity.’ 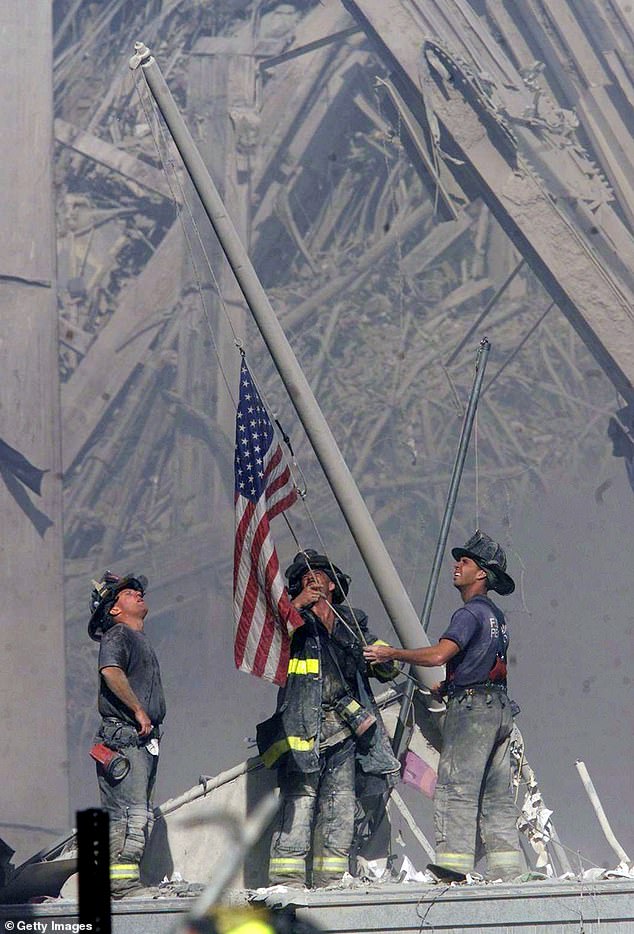 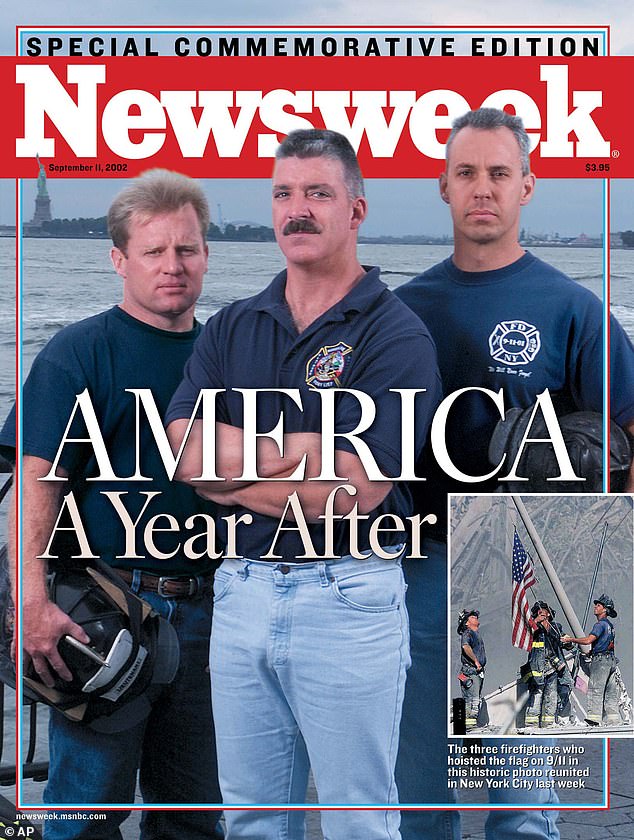 Among those duties was allegedly asking him to escort civilians and muster uniformed officers into formation away from the mass.

McWilliams claimed in his suit that he asked Wilson if she was removing him from the color guard because he’s not black. She confirmed that was the case, he said.

Wilson, a 21-year FDNY veteran who was also part of the 9/11 rescue efforts, apparently replaced McWilliams with one of the members of the Vulcan Society.

McWilliams claimed he left the memorial ‘to save himself from further shame, humiliation and embarrassment,’ as their exchange was overheard by friends and colleagues, the New York Daily News reported.

During her trial testimony, McWilliams’ lawyer, Keith Sullivan, asked Loving – who is black – ‘So, a request for an all-black color guard is not discriminatory?’

‘No, it isn’t,’ Loving said, according to the New York Post.

Sullivan also asked Loving if it’s OK to request an all-black color guard, to which she was quoted as saying, ‘Most definitely.’

By way of explanation, Loving said that it was OK to swap out a white person for a black person to ‘uplift our identities and our separate ethnicities in order to instill a sense of pride and community and support for one another.’ 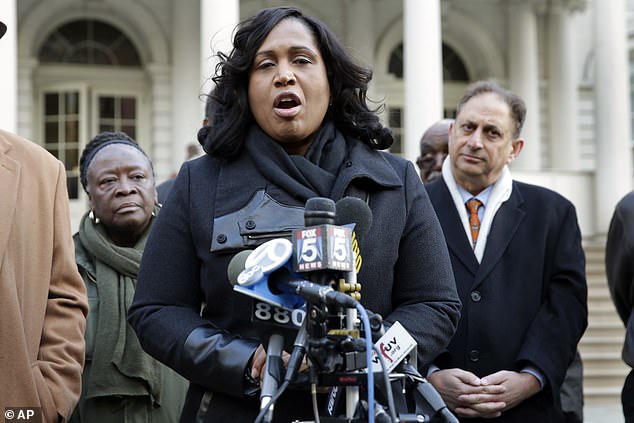 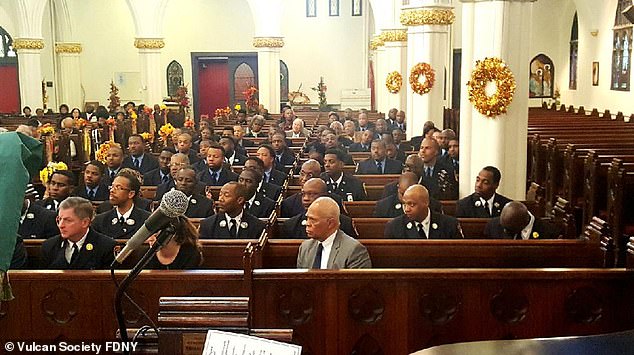 The memorial mass (pictured) was held at St. Philips Episcopal Church in New York City in November 2017, honoring members of the Vulcan Society 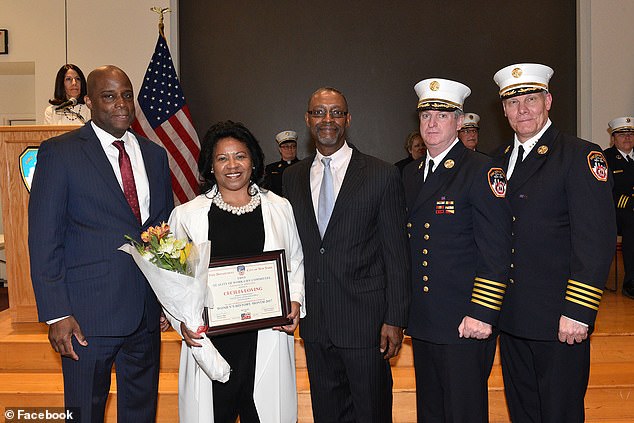 McWilliams first filed his racial bias complaint with the FDNY in January 2018. He then filed a lawsuit against Wilson, the FDNY, the city of New York and unnamed individuals in May 2019.

After filing his complaint, Sullivan said that McWilliams was retaliated against and intimidated by Wilson’s supporters.

At one point, one of her supporters allegedly laid hands on McWilliams and said: ‘I’ve heard about you, they told me you’d act this way, and now you know me.’

In a brief, Sullivan wrote that rejecting McWilliams from the mass’ color guard position was ‘deplorable’ and a sign of double standards in the fire department.

‘If you’re black and you discriminate against a white person in the workplace, you get a slap on the wrist at best,’ Sullivan wrote.

Wilson, according to the lawsuit, received ‘one hour of counseling’ over her treatment of McWilliams.

Meanwhile, a white person who discriminates against a person of color receives ‘heavy-handed discipline and punishment,’ Sullivan wrote.

‘The FDNY has created a policy and procedure for bending over backwards, coming up with excuses and accommodating members of the Vulcan Society … who commit racist acts, and it has to stop,’ Sullivan also wrote.

The FDNY has not commented on the incident, due to pending court decision.