Fear of spiders may be triggered by aversion to scorpions, study says

If you’re terrified of spiders, your fear may actually be rooted in an aversion to scorpions, a new study claims.

In experiments, researchers showed live spiders, scorpions and other arthropods including beetles and crabs to willing participants who rated their emotions.

Participants reacted similarly in terms of fear and disgust to chelicerates – the animal group that includes both spiders and scorpions, the team found.

Only 0.5 per cent of all spider species are potentially dangerous to humans, so it’s thought fear of spiders is based on their similarities to the generally more harmful scorpions.

Scorpions share a similar body plan with spiders, but the former pose more of a threat to humans – they have a powerful venom containing a complex mix of toxins that affect a victim’s nervous system.

Every year, around 1.5 million scorpion bites are reported worldwide, with approximately 2,600 of them being lethal.

It’s thought a strong fear of spiders (which otherwise seems inexplicable, as spiders are not dangerous) might be triggered by a much broader strong fear of chelicerates. Pictured, an Emperor Scorpion ( Pandinus imperator)

Over 300 respondents were asked to rate live specimens of 62 arthropod species:

The new study was conducted by experts at Charles University in Prague, Czech Republic and published in Scientific Reports.

‘Spiders are mostly harmless, yet they often trigger high levels of both fear and disgust, and arachnophobia (the phobia of spiders) ranks among the most common specific animal phobias,’ they say in their paper.

‘To investigate this apparent paradox, we turned to the only close relatives of spiders that pose a real danger to humans: scorpions.

‘We hypothesise that the often (self-)reported strong fear of spiders (which otherwise seems inexplicable, as spiders are not dangerous) might be triggered by a much broader strong fear of chelicerates.’

Researchers recruited a total of 329 participants for the study, who were asked to rate live specimens of 62 arthropod species (including spiders, scorpions, cockroaches, and other insects) based on perceived fear, disgust and beauty. 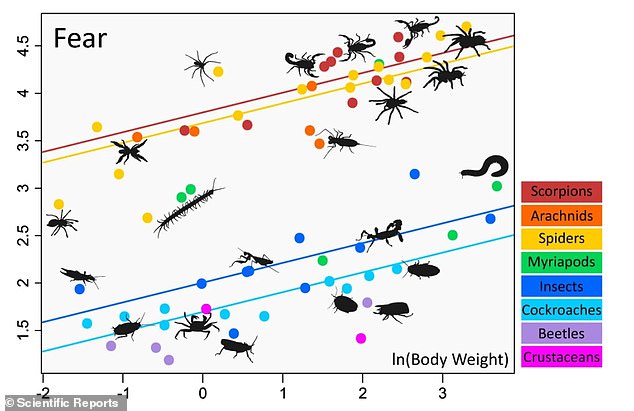 But what was interesting was chelicerates – the group of arthropods that includes spiders, scorpions, mites, spiders, horseshoe crabs, ticks and more – were perceived as one cohesive group, distinct from other arthropods, such as insects or crabs.

‘We formulated a hypothesis that fear of spiders might be triggered by a more generalised fear of chelicerates, where scorpions are the original model which one should fear,’ the researchers say.

‘In support of this hypothesis, we found that spiders, scorpions, and spider-like arachnids (whip spiders, whip scorpions, and camel spiders) are all rated as eliciting great fear and strong disgust.

‘Moreover, their ratings tend to be very similar no matter how a particular respondent scored them, suggesting they are all recognised as members of one category.’ 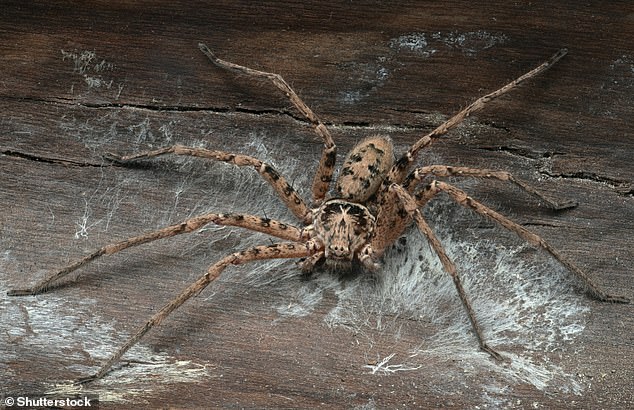 Australian spiders generally have a bad reputation – pictured here is the giant huntsman spider (Heteropoda maxima, pictured), which can reach up to a whole foot (30 cm), but it’s not poisonous

Researchers also found that cockroaches were generally perceived as very low in beauty and ‘rather ugly’, although they also rated low in terms of fear.

Arachnophobia, the specific phobia of spiders, is one of the most common specific animal phobias, affecting 2.7 to 6.1 per cent of the general population.

The causes of arachnophobia and spider-related fear are unknown, although it may be an evolutionary response to avoid pathogens, parasites and other sources of contamination.

The team conclude it is particularly interesting that scorpions, which present a more significant threat to humans from an evolutionary perspective, do not cause phobias (as opposed to snakes, for example).

Spiders, meanwhile, which pose ‘a negligible risk’ to humans, are among the most common sources of animal phobias.

ARACHNOPHOBIA IS IN OUR DNA

Recent research has claimed that a fear of spiders is a survival trait written into our DNA.

Dating back hundreds of thousands of years, the instinct to avoid arachnids developed as an evolutionary response to a dangerous threat, the academics suggest.