Alicia Clark was imprisoned by a cult planning to start Armageddon on Sunday’s episode of Fear The Walking Dead.

Under the direction of serial killer Teddy Maddox [John Glover], the cult aimed to launch a nuclear missile off a submarine and kill everyone on earth.

Its members tried to indoctrinate Alicia [Alycia Debnam-Carey], but when they couldn’t they locked her up in a 1950s-era bunker.

Doomsday cult: Alicia Clark was imprisoned by a cult planning to start Armageddon on Sunday’s episode of Fear The Walking Dead on AMC

Teddy thought Alicia could somehow be the one to lead them into the future.

‘I know this is hard to accept, Alicia, but this is what’s happening,’ he declared. ‘You are going to rebuild the world from in there.’

Teddy himself had been locked up for nearly 30 years after murdering multiple women.

Early on, he was shown in a cell on death row at the beginning of the zombie apocalypse. 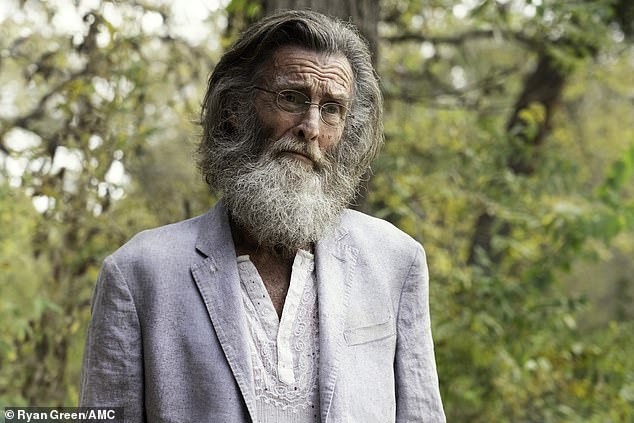 Nuclear ambition: Under the direction of serial killer Teddy Maddox [John Glover], the cult aimed to launch a nuclear missile off a submarine and kill everyone on earth

‘Death is the end,’ he wrote in his notebook. ‘We must return our bodies to the soil. Resurrect the natural order of the planets, the universe. The end will be a beginning.’

Outside Teddy’s cell, a prisoner screamed as guards dragged him to the death chamber.

Laughing, Teddy reassured the man he was about to enter a new life. 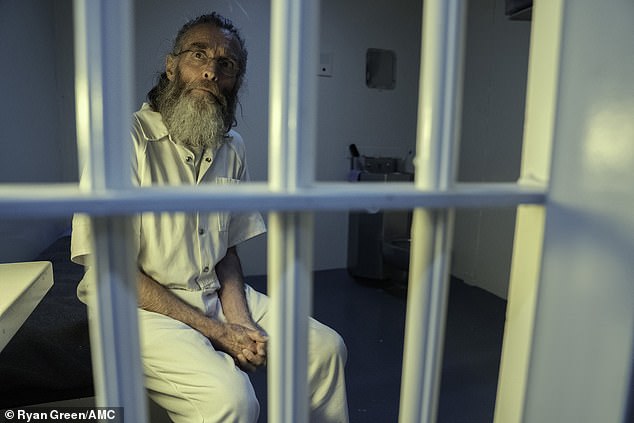 Behind bars: Early on, he was shown in a cell on death row at the beginning of the zombie apocalypse

‘You actually believe all that bulls*** you spew, Maddox?’ a guard named Hayes (Thom Hallum) shouted. ‘You’ll be walking this walk soon enough.’

The guards had only been gone minutes when alarms sounded and Teddy’s cell door shot open.

Back down the hall they came, but this time they were zombies, one biting a prisoner. 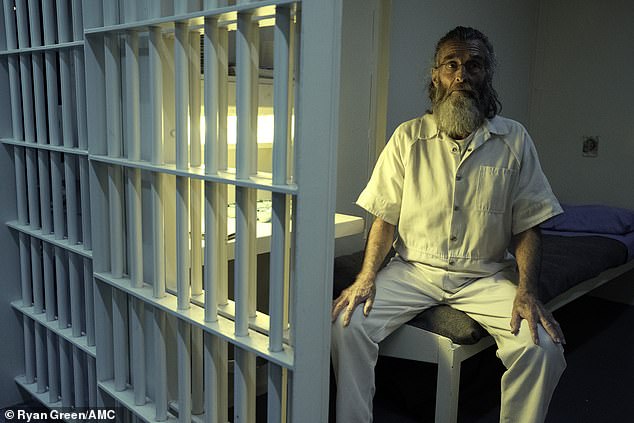 Doors opened: The guards had only been gone minutes when alarms sounded and Teddy’s cell door shot open

Zombie Hayes stumbled toward Teddy, who instinctively stabbed him in the head with a pen.

‘I was right!’ Teddy said as he fell. ‘I just needed to be patient.’

He looked down and crowed, ‘It’s not bulls***, Hayes. It’s revelation.’ 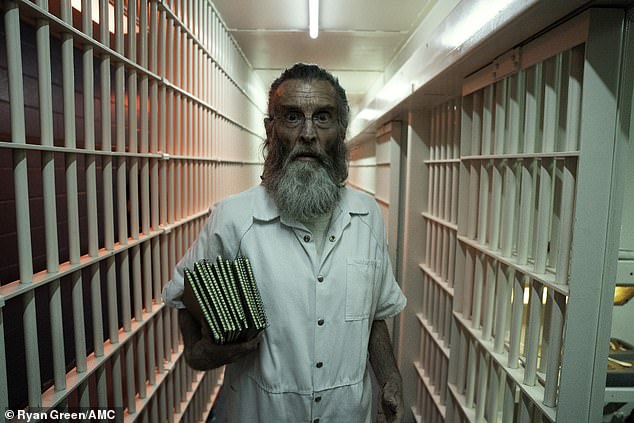 Back in the present day, Teddy was leading his own cult in a garage known as The Holding.

Alicia had tried to burn the place down, and the cultists wanted to indoctrinate her.

‘You have lived this moment before,’ Teddy’s voice repeated over a loudspeaker. ‘Believe me when I tell you, my friends: We are in a loop.’ 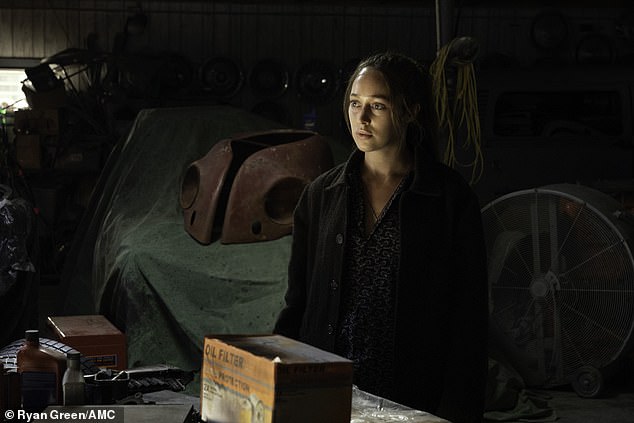 Cult imprisonment: Alicia had tried to burn the place down, and the cultists wanted to indoctrinate her

Alicia rejected the cult’s ways, even as member Riley [Nick Stahl] threatened to shoot her.

Standing behind him, Teddy seized Riley by the genitals, warning, ‘She’s coming with me.’

He took Alicia above ground, where she spotted a new cult recruit: Dakota [Zoe Margaret Colletti]. 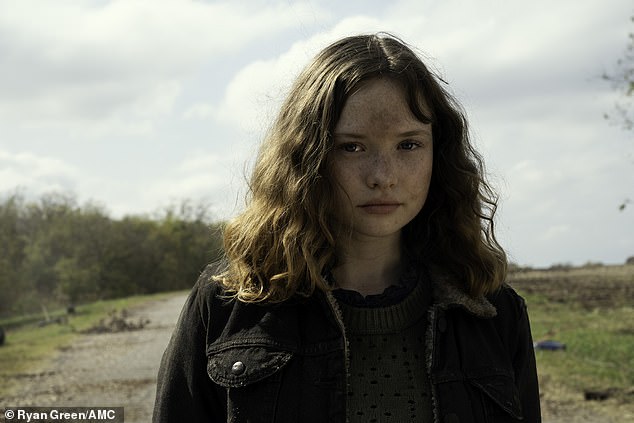 When Teddy heard that Dakota had tried to kill her mother, he asked her to join them.

He hung a chain with two keys around Riley’s neck, saying, ‘If I don’t show up by tomorrow, you know what to do.’

Dakota told Alicia that she’d heard the cult had stocked a building with supplies that could keep it going for years. 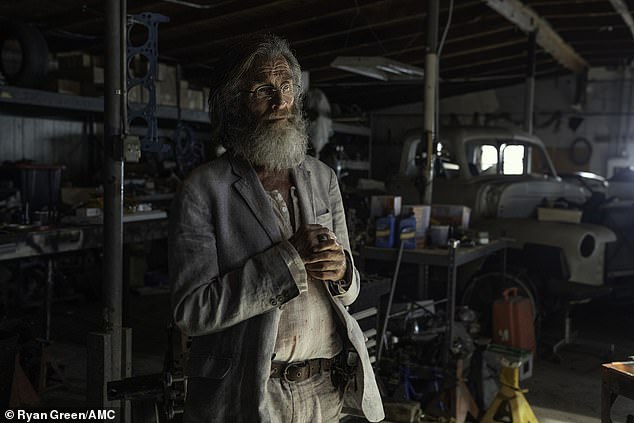 Death obsession: When Teddy heard that Dakota had tried to kill her mother, he asked her to join them.

They boarded Teddy’s pickup together, and soon passed an area Alicia knew well, where her mother Madison Clark [Kim Dickens] had sacrificed herself to save others.

Alicia wondered what Teddy was playing at, but he swore it was just a ‘meaningful’ coincidence.

The cult leader then pulled up to a graveyard, and stole his mother’s body from a vault. 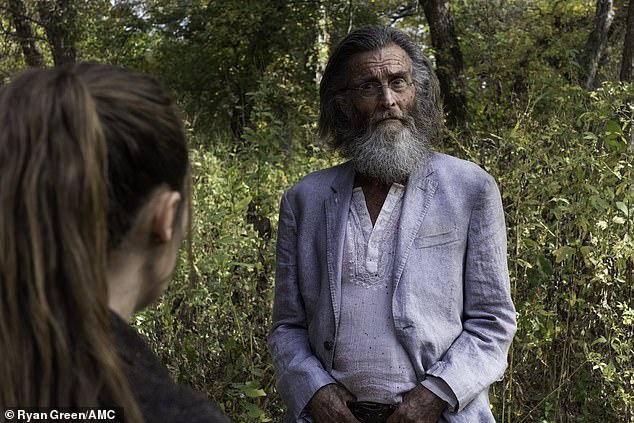 Corpse retrieval: The cult leader then pulled up to a graveyard, and stole his mother’s body from a vault

‘She was taken way before her time,’ he told the horrified survivors, putting the corpse in his truck bed. ‘That doesn’t mean she can’t be part of our new beginnings.’

Teddy reckoned they’d all lost mothers, and he wanted to engage them in the cult’s future.

He only wanted to save what he loved and destroy what he didn’t, he said.

The pickup hit a nailbed on the road and Teddy swerved, as ‘Mother’ shot out the back.

The trio went to get her body but got sidetracked by zombies on the road. 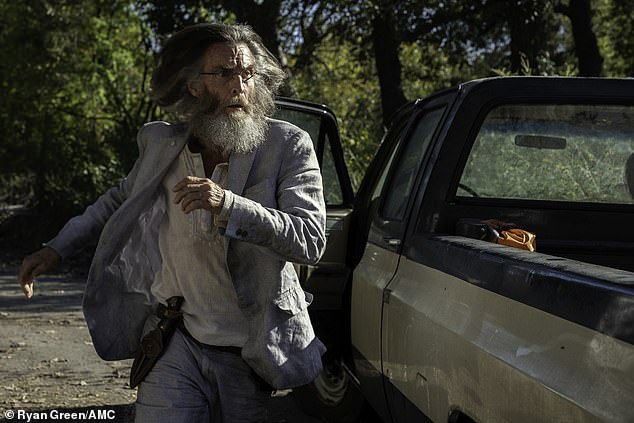 Blown tire: The pickup hit a nailbed on the road and Teddy swerved, as ‘Mother’ shot out the back

Gunshots rang out and the zombies were felled by Alicia’s old friend Cole [Sebastian Sozzi], who’d been saved by Madison’s sacrifice.

Alicia was shocked to see him again after so long.

Cole warned her that ‘unsavory types’ were lurking about, setting traps for survivors. 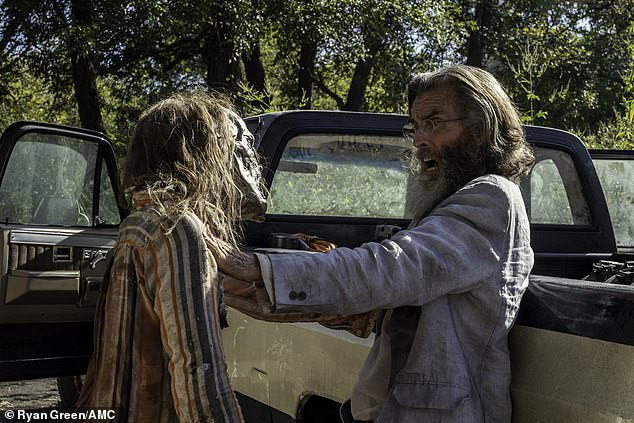 He agreed to help them find a new vehicle and gave his rifle to Alicia at Teddy’s request.

As they walked, Teddy and Dakota discussed people they’d killed, with Dakota saying she didn’t feel bad about it.

‘When I tell people that, they look at me like they’re scared,’ she said. ‘But from what I can tell, that’s just how things are now.’ 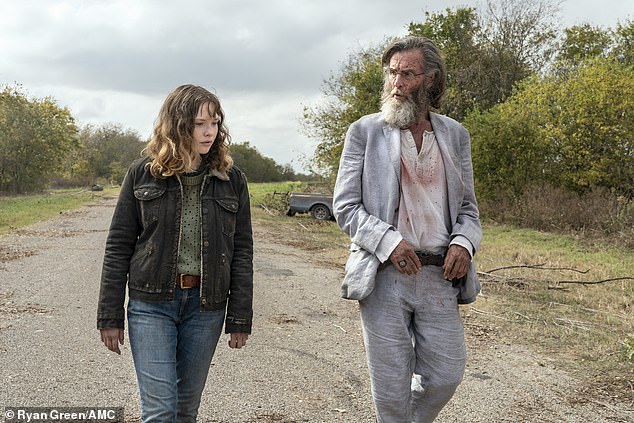 Killer conversation: As they walked, Teddy and Dakota discussed people they’d killed, with Dakota saying she didn’t feel bad about it

‘They’re frightened by what you’re saying, ’cause they know it’s the truth,’ Teddy affirmed.

Cole told Alicia they should kill Teddy, but she wanted to find out what the cult was doing first.

They walked into an auto parts garage, and found dozens of strangers pointing guns at them.

‘Those unsavory types?’ Cole said, referring to his earlier comment. ‘I’m one of ’em.’ 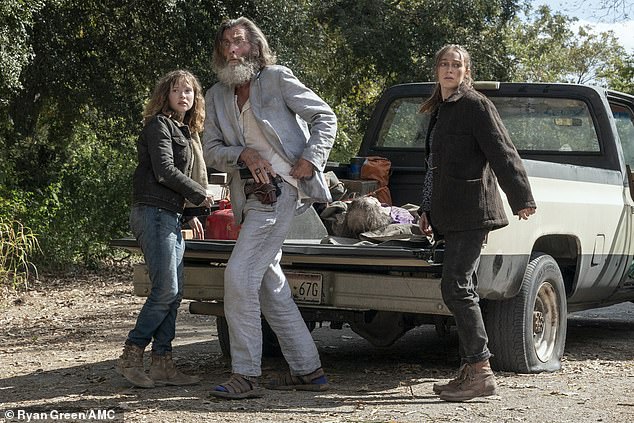 Under attack: The blown tire stranded the trio but they were saved by Cole

In the crowd were Doug [Kenneth Wayne Bradle]) and Viv [Rhoda Griffis], whom Madison had also fought to save.

Viv explained that they and their friends had been attacked when they went looking for Alicia and some had died.

‘So you’ve decided to do the same things to whomever crosses your path,’ Alicia lamented.

‘It’s because of people like you, Cole, that the world needs to be destroyed,’ Teddy snapped. 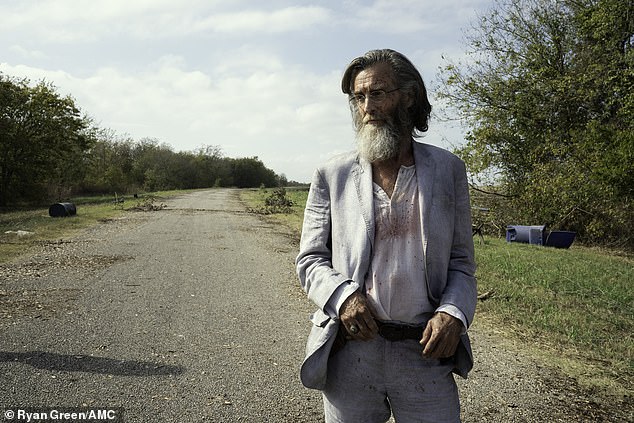 World ender: ‘It’s because of people like you, Cole, that the world needs to be destroyed,’ Teddy snapped

The group headed back to the pickup truck, where Cole fixed Teddy’s flat tire.

Teddy reminded Alicia that the people Madison saved either died or became ‘bottom-feeders.’

Cole then ordered Teddy at gunpoint to disclose where he was going, and Teddy refused.

Cole shot ‘Mother’ in the face; unperturbed, a laughing Teddy said she wasn’t his mom.

He’d merely used her to stir Alicia’s sympathies, and get her to stick around.

Cole told Alicia that if she didn’t join them, he’d kill her too.

‘Well, then that makes my decision a little easier,’ Alicia retorted. ‘You can go to he**.’

She kneeled next to Teddy and Dakota as the others pointed guns at their heads.

Cole turned to shoot Teddy, and Alicia wrestled him for his rifle.

The zombies returned to bite Doug and Viv, as Teddy and Dakota fought them together.

Alicia aimed a gun at Cole through a zombie’s belly, then shoved it at him.

‘Shoot him,’ Teddy urged. ‘Alicia, I know you don’t want to get rid of your mother, but…’

‘She died so you could have a chance,’ Alicia told Cole. ‘You were supposed to make it mean something. And you threw it all away.’ 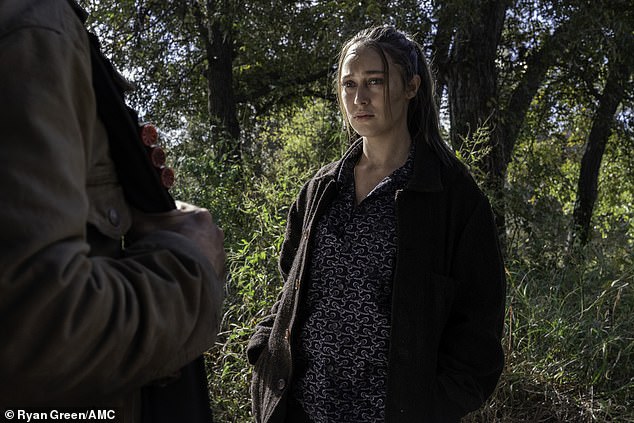 Brutal betrayal: ‘She died so you could have a chance,’ Alicia told Cole. ‘You were supposed to make it mean something. And you threw it all away’

Alicia shot Cole in the head.

‘You don’t have to destroy everything to make it better,’ she told Teddy. ‘Just people like him.’

Dakota backed Alicia’s decision, but Alicia said she hadn’t wanted to do it. 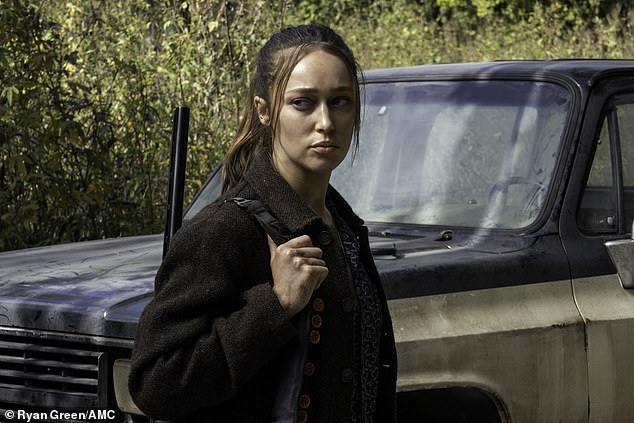 Head shot: Alicia shot Cole in the head and killed him

‘I want to believe in something better,’ she emphasized.

Teddy said Alicia reminded him of his mother.

‘Did she think you were a nutjob too?’ Alicia asked.

The cultist said his mother read his journals when he was in mortuary school.

‘She thought I was sick,’ he complained. ‘Disturbed’ was the word she used. She threatened to call the county, social services, and have me committed. ‘That’ll put an end to your sick thoughts,’ she said. ‘Give you a new beginning.’ She didn’t know how right she was.’

‘I take it you didn’t listen to her,’ Alicia said.

‘I killed her,’ Teddy said. ‘Buried her in the backyard. I waited all fall and winter, worried that somebody was going to find her body. And then when spring rolled around, oh! The strangest thing happened. The most beautiful morning glories sprouted and bloomed right over her body.’

‘What we needed was a new beginning,’ he reasoned. ‘A world where people like Mother could thrive free from the patterns of our broken world.’

‘How do you plan to destroy it all?’ Alicia asked. 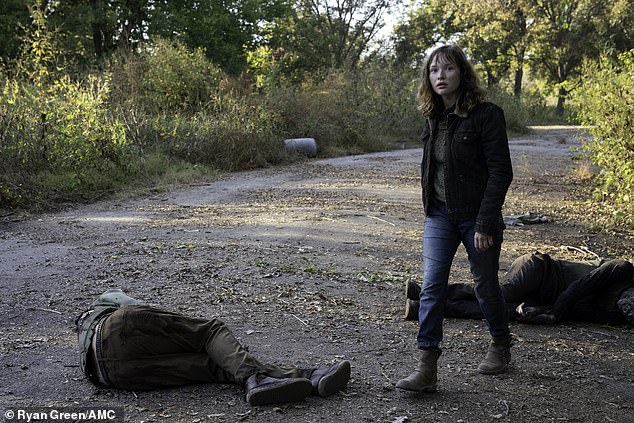 Fighting back: Dakota helped fight off the zombies also

‘Well,’ Teddy said, ‘you certainly have earned the truth today. That key will launch a missile from a beached submarine washed ashore in Galveston. That should do the job, don’t you think?’

‘I think,’ Alicia said, taking Teddy’s radio and pointing a gun at his head, ‘that Cole isn’t the only person we need to get rid of to make things better.’ 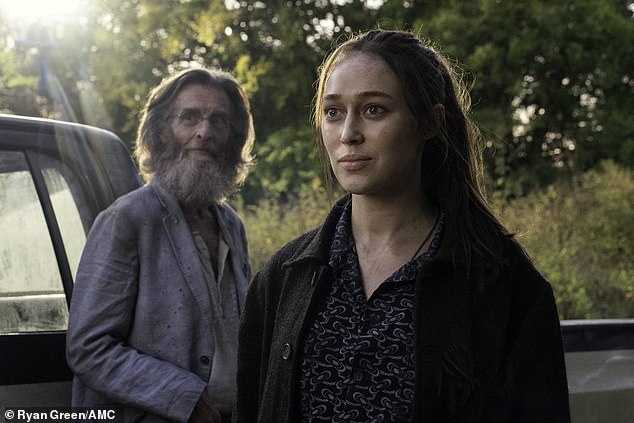 Taking charge: ‘I think,’ Alicia said, taking Teddy’s radio and pointing a gun at his head, ‘that Cole isn’t the only person we need to get rid of to make things better’

Dakota aimed her rifle at Alicia.

‘You’re gonna have to get rid of me, too,’ she said. ‘I’ve been waiting a long time to get a fresh start. Thought it was gonna be with you and Morgan, but I guess it’s gonna have to be with him.’

Alicia quickly radioed Victor (Colman Domingo) and told him about the submarine. 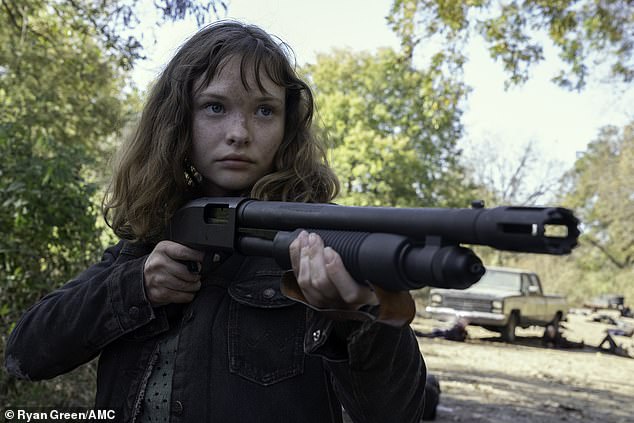 Riley drove up then and threatened to shoot Alicia; again, Teddy saved her.

‘You are the right person for what’s to come,’ Teddy explained.

They all drove to the Franklin Hotel, the massive structure that was their new base.

Riley read that it contained a bunker built by government officials waiting out the Cold War.

‘Uncle Sam was smart about what was coming, just not about when,’ Teddy guffawed. 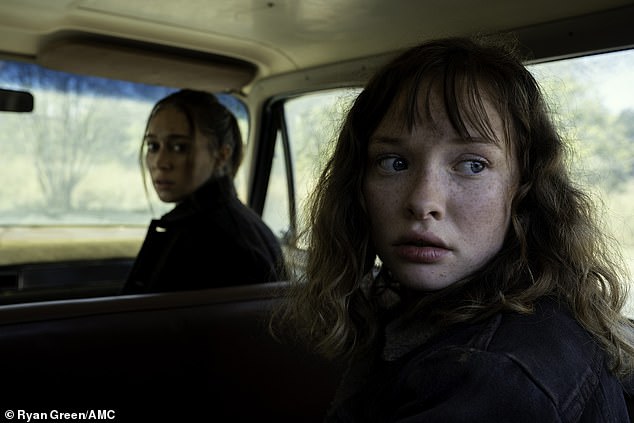 Checkered past: Alicia kept her distance from Dakota who tried to get closer to her

He led Alicia inside, saying that he knew she was going to finish what he started.

‘I’m not finishing anything,’ Alicia declared.

‘The beginning is the end,’ Teddy crooned. ‘I’m the ending, so I can’t be the beginning—but you can. You can do what needs to be done without losing sight of the one thing that’s gonna be in short supply once this is all over: Hope.’

With that, Alicia was pushed into a thick-walled cell, and locked inside.

It was there, Teddy said, that she would ‘rebuild the world.’

‘The two of us are very much alike,’ he mused. ‘I was way ahead of my time living in a world I was ill-suited for. But while I was inside the world changed into a world I was perfectly suited for. That’s exactly what’s going to happen with you inside.’

‘You lock me in here, I’m not gonna make the world the way you want it to be!’ Alicia yelled.

Fear The Walking Dead will return next week on AMC. 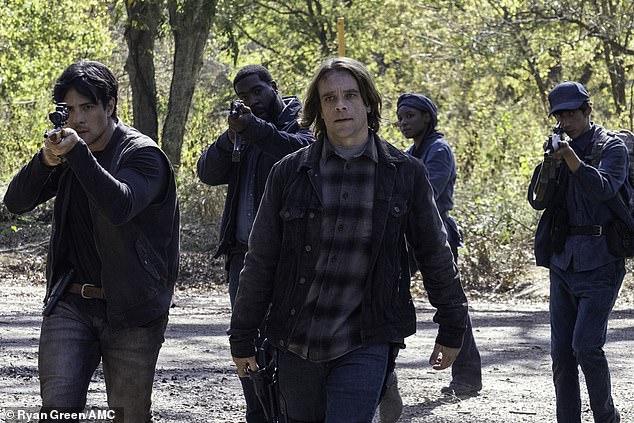