Proposals to make it easier to deselect Labour MPs could be passed by the party today amid fears the hard-left wants to purge the organisation of moderates.

And they are expected to be voted through by party delegates at their conference in Liverpool today.

Under the proposals, MPs will face open selection battles if a third of local branches or affiliated unions demand one – cutting it from the current 50 per cent threshold.

Ahead of the crunch vote union baton Len McCluskey claimed on the conference fringe critics of Jeremy Corbyn were ‘almost asking to be de-selected’.

And plans to make it easier for a Corbynista to take over as leader are also expected to be passed today.

Under them, anyone wanting to stand to be leader would have to get the backing of 5 per cent of constituency parties or trade union members.

The move would hand the 500,000 Labour Party members far more power and almost certainly ensure that the left get onto the ballot.

A Labour source said: ‘The proposal agreed unanimously by the NEC reforms the existing reselection process, giving members and trade union affiliates a greater say in who represents them, but doesn’t move to automatic open selections.’

The moves come after several Labour moderate MPs have faced no confidence votes from their local parties after they spoke out against Mr Corbyn’s over anti-Semitism.

Joan Ryan, Gavin Shuker and Chris Leslie have all blamed the hard-left who have flooded into the party after they were hit by the votes.

But Mr McCluskey, the powerful leader of the Unite union, said critics of Mr Corbyn only had themselves to blame. 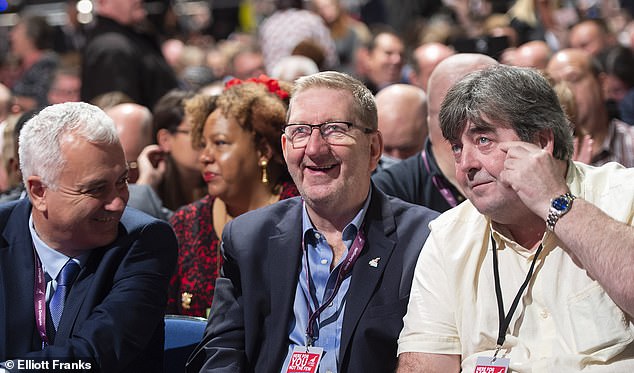 Len McCluskey (pictured today at Labour conference), the powerful leader of the Unite union, said critics of Mr Corbyn only had themselves to blame

Speaking at an event on the fringes of the conference, he said: ‘There are certain MPs who are almost asking to be de-selected.

‘They really don’t want to be part of this exciting transformation that is taking place.’

In a sign of the depth of animosity between the hard-Left and Labour centrists, Mr Corbyn today sided with a shadow minister who praised the 1980s Militant-dominated council in Liverpool.

Shadow equalities minister Dawn Butler said the authority had stood up to Margaret Thatcher’s cuts, saying it was ‘better to break the law than break the poor’.

The extraordinary endorsement sparked outrage from party colleagues who said the remarks were ‘another nail in Labour’s coffin’.

But Mr Corbyn today insisted that there was nothing wrong with her views. 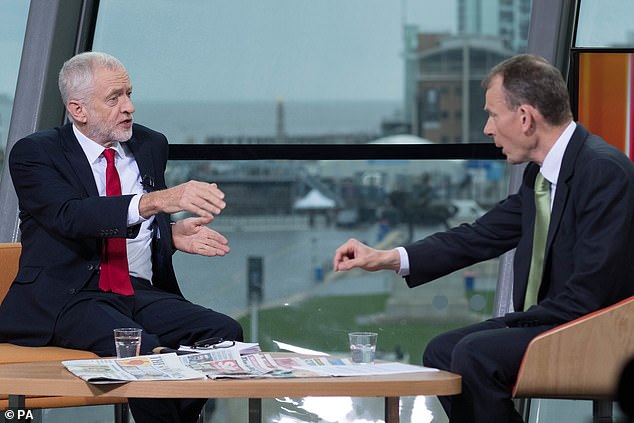 In a sign of the depth of animosity between the hard-Left and Labour centrists, Mr Corbyn used a BBC interview today (pictured) to side with a shadow minister who praised the 1980s Militant-dominated council in Liverpool

‘I think what she was doing was expressing support for the determination of the people of Liverpool,’ he told the BBC’s Andrew Marr Show.

‘The politics and the legalities of the whole thing have moved on and indeed what we need is proper funding of local government.’

In an interview kicking off Labour conference in Liverpool, Mr Corbyn added that he understood why councils set illegal budgets.

‘I understand it, absolutely understand it. I represent an inner city area in Islington and we were very angry in the 1980s at the way our council expenditure was cut,’ he said.

He added that he was ‘very angry now when I see local authorities trying their best to deliver good quality services’ in the face of reduced funds.