Stocks have slumped after Federal Reserve officials signaled that a quarter-point rate cut is likely at the July meeting, disappointing investors and President Donald Trump, who has demanded more drastic action.

According to the report, while the U.S. central bank is not prepared to make a bigger 50-basis-point cut, it may make further rate cuts in the future given concerns about a decline in global economic growth and uncertainty about trade.

On Thursday, stocks had risen as comments from New York Fed President John Williams increased hopes of a bigger rate cut. Later that day, however, a New York Fed representative said Williams’ comments were not intended to telegraph any hints about upcoming Fed policy actions. 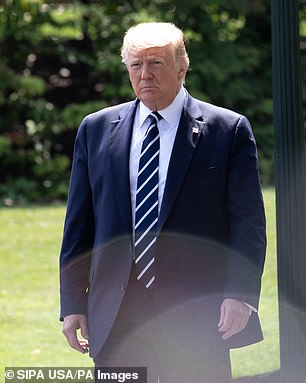 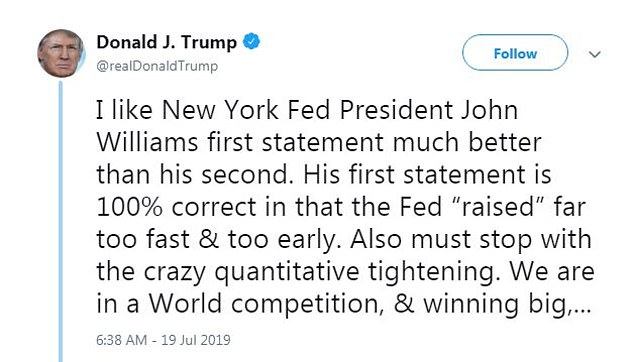 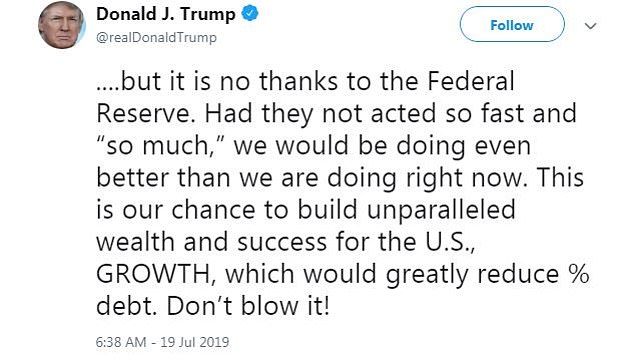 ‘I like New York Fed President John Williams first statement much better than his second,’ Trump tweeted on Friday morning in response to the reversal.

‘His first statement is 100% correct in that the Fed ‘raised’ far too fast & too early. Also must stop with the crazy quantitative tightening,’ he continued.

‘We are in a World competition, & winning big, but it is no thanks to the Federal Reserve. Had they not acted so fast and ‘so much,’ we would be doing even better than we are doing right now,’ Trump wrote.

‘This is our chance to build unparalleled wealth and success for the U.S., GROWTH, which would greatly reduce % debt. Don’t blow it!’

Futures market odds of a 50-basis-point cut at the Fed’s July meeting soared to 71% late Thursday immediately after Williams’ speech but fell to 22.5% on Friday, according to CME Group’s Fedwatch tool.

Second-quarter profits at S&P 500 companies are now estimated to rise 1 percent, according to Refinitiv IBES data, in a reversal from earlier expectations of a small drop. 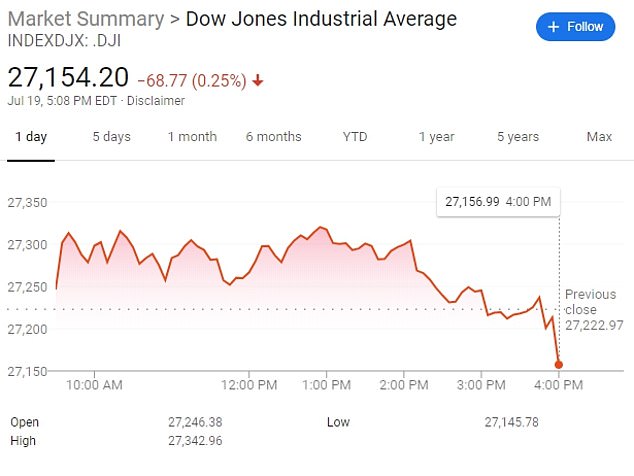 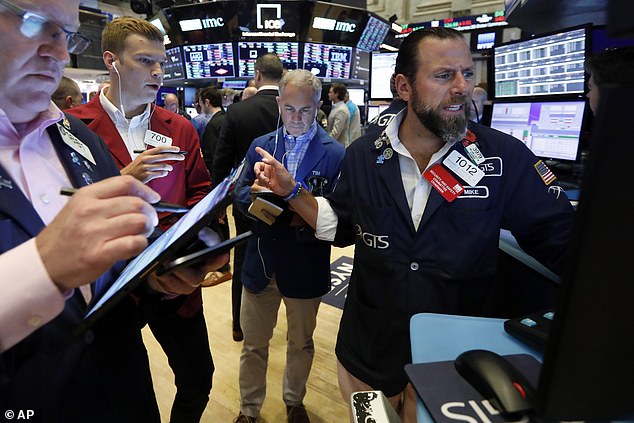 Boeing Co shares gained 4.5 percent, despite the planemaker’s disclosure that it would take a $4.9 billion after-tax hit from the grounding of its 737 MAX, indicating that investors had expected more severe repercussions.

Shares of American Express Co slipped 2.8 percent after the credit card issuer warned of higher operating costs this year as it spends heavily on rewards programs to attract customers.

Declining issues outnumbered advancing ones on the NYSE by a 1.29-to-1 ratio; on Nasdaq, a 1.51-to-1 ratio favored decliners.