A federal judge ruled Tuesday against the Trump administration’s decision to end a program protecting some young immigrants from deportation, calling the Department of Homeland Security’s rationale against the program ‘arbitrary and capricious.’

US District Judge John D. Bates in Washington wrote that the decision to rescind the Deferred Action for Childhood Arrivals program, known as DACA, ‘was unlawful and must be set aside.’

Bates wrote that DHS’ decision ‘was predicated primarily on its legal judgment that the program was unlawful. That legal judgment was virtually unexplained, however, and so it cannot support the agency’s decision.’

Bates gave DHS 90 days to ‘better explain its view that DACA is unlawful.’

If the department cannot come up with a better explanation, he wrote, it ‘must accept and process new as well as renewal DACA applications.’

In this January 21, 2018 file photo, demonstrators rally in support of Deferred Action for Childhood Arrivals (DACA) outside the Capitol in Washington

DACA allowed immigrants brought to the US illegally as children, known as Dreamers, to stay and work legally under renewable permits.

It was officially rescinded in March, but DHS is continuing to issue renewals because of previous court orders.

Bates’ ruling Tuesday night comes in a pair of cases whose lead plaintiffs are the NAACP and Princeton University.

He is the third judge to rule against administration plans to end the program.

Earlier this month, Trump said the Obama-era program is a thing of the past – and blamed congressional Democrats for standing and watching while he ended it.

‘DACA is dead because the Democrats didn’t care or act, and now everyone wants to get onto the DACA bandwagon,’ the president tweeted.

That, he said, ‘[n]o longer works. Must build Wall and secure our borders with proper Border legislation. Democrats want No Borders, hence drugs and crime!’

The notion that a new wave of illegal immigrants could balloon the DACA-eligible population is unfounded, at least as President Barack Obama defined it: The program offers deportation protection to those who were brought to the U.S. as children, but only if they were already in the US on June 15, 2012.

Still, the White House is signaling that somehow a future horde of new border-jumpers could swell DACA’s ranks. 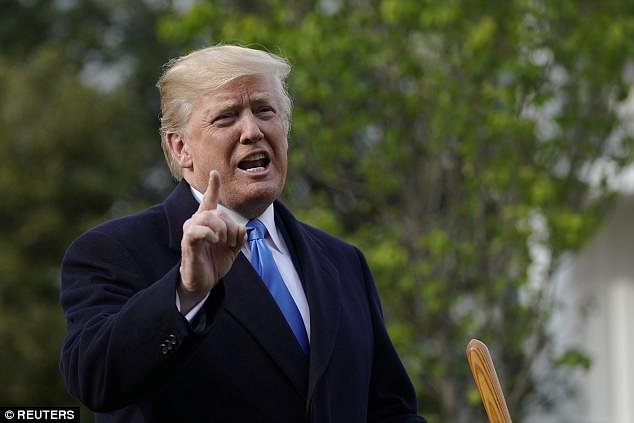 Trump declared in September 2017 that he would end the program on March 5, giving Congress six months to codify it into law and essentially invalidating the limitations on who might qualify for a future version of it.

But his gambit – dangling DACA as leverage to move Democrats toward his position on border security – backfired when federal courts intervened and stopped his administration from turning away applications for status renewal.

And when Congress inked a spending deal that included scant support for his long-promised border wall, the president was forced by circumstance to sign it.

Trump tweeted on Easter Sunday that there would be no new effort to push a deal with Democrats forward.

He also threatened to pull out of a free trade agreement with Mexico unless it does more to stop people from crossing into the US.

‘NO MORE DACA DEAL!’ Trump tweeted, one hour after he began the day by wishing his followers a ‘HAPPY EASTER!’

He said Mexico must ‘stop the big drug and people flows, or I will stop their cash cow, NAFTA. NEED WALL!’

The US, Canada and Mexico are participating in tense negotiations over the North American Free Trade Agreement at Trump’s insistence. Trump says NAFTA is bad for the US.