The Hawaii state employee who mistakenly sent an alert warning of a ballistic missile attack earlier this month is refusing to cooperate with federal and state investigators.

The head of the Federal Communications Commission Public Safety and Homeland Security Bureau told a U.S. Senate hearing the FCC was pleased with the cooperation it’s received so far from Hawaii Emergency Management Agency leadership.

But Lisa Fowlkes, the Bureau Chief, said the commission was disappointed that the agency employee who transmitted the false alert was refusing to cooperate.

‘We hope that person will reconsider,’ she told U.S. Senate commerce committee members. 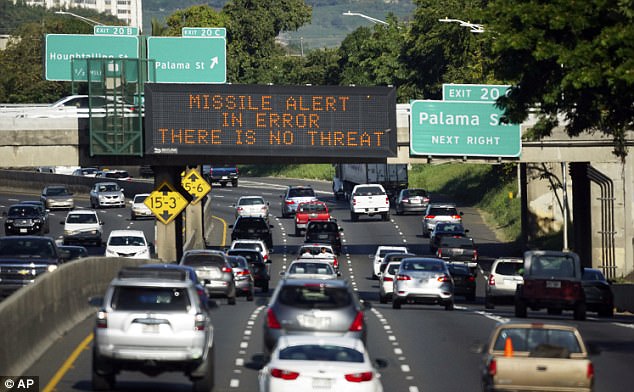 Rapoza said he couldn’t speak to why the employee wasn’t cooperating with federal investigators.

‘With regard to our internal investigations, he has taken the position that he provided a written statement shortly after the incident, and doesn’t need to speak to investigators because he has nothing to add,’ Rapoza said in an email.

The agency has not identified the employee. He continues to work at the agency though has been reassigned to a section where he doesn’t have access to the warning system.

FCC spokeswoman Tina Pelkey, when asked what reason the employee has given for not cooperating with its probe, said the commission had no further comment. 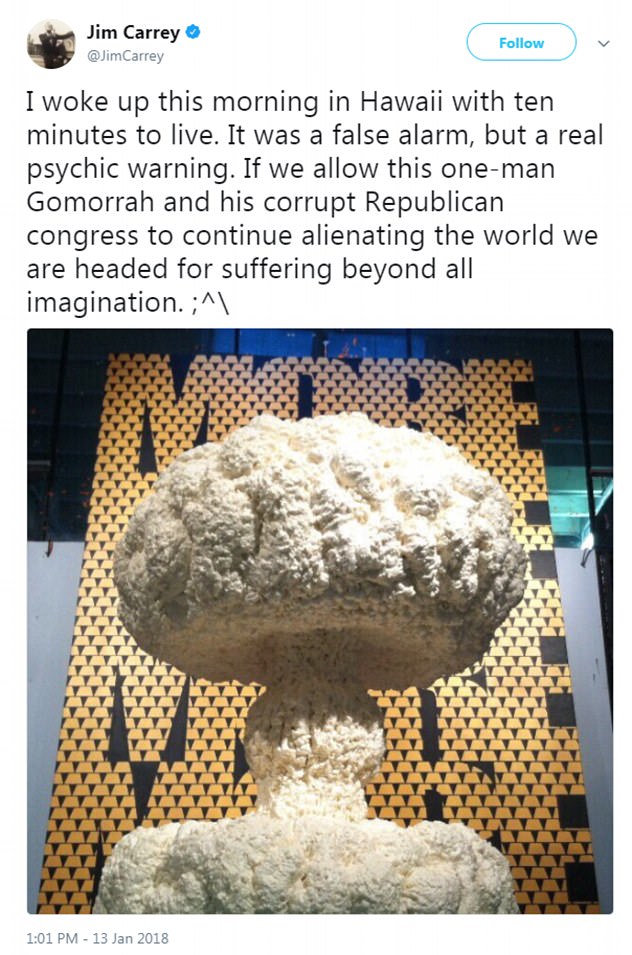 ‘I woke up this morning in Hawaii with ten minutes to live,’ the ‘Truman Show’ actor wrote

HEMA issued the alert at around 8am on Janaury 13 which read: ‘Emergency Alert: BALLISTIC MISSILE THREAT INBOUND TO HAWAII. SEEK IMMEDIATE SHELTER. THIS IS NOT A DRILL.’

The agency then failed to cancel the alert for 38 minutes, sparking widespread panic among the 1.4million people who live on the island.

Fearing a nuclear attack, terrified residents and tourists ran for their lives, taking cover in shelters, like basketball legend Magic Johnson, their garages and even lowered loved ones through manhole covers.

One man even suffered a massive heart attack minutes after the false missile alert in Hawaii.

The Honolulu Star-Advertiser reported Tuesday that Sean Shields, 51, started violently throwing up while at Sandy Beach on Oahu after the alert and called his 10-year-old daughter and adult son to say goodbye.

Then he drove himself and his girlfriend to a health center where she says he collapsed in the waiting room. Shields’ girlfriend, Brenda Reichel, says medical staff performed CPR and transported the man to a hospital, where he had emergency surgery. 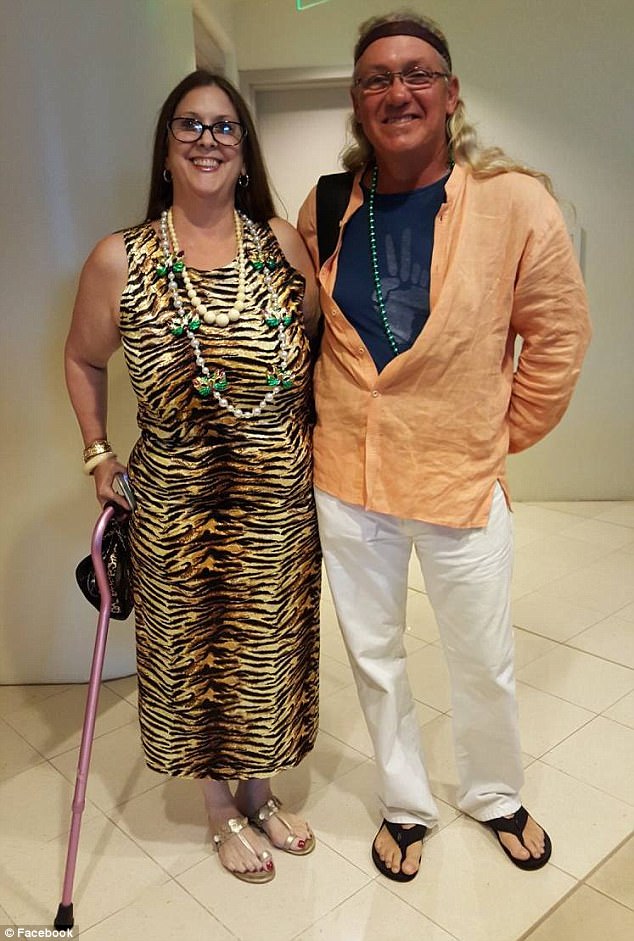 On the H-3, a major highway north of Honolulu, vehicles sat empty after drivers left them to run to a nearby tunnel after the alert showed up, the Honolulu Star-Advertiser reported.

Golfers in Honolulu for the US PGA Tour’s Sony Open were also thrown into panic and confusion by the mistaken alert.

Some sent heartfelt messages to their families and loved ones, convinced they might not make it.

The false alarm was sent at about 8am local time by a Hawaii Emergency Management employee who ‘pushed the wrong buttons’ during an internal drill timed to coincide with a shift handover. 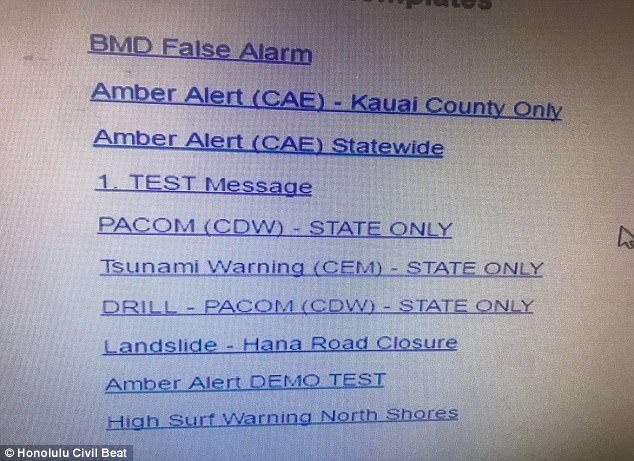 In this initial photo from the Governor’s Office/State of Hawaii, the screen that set off the ballistic missile alert Saturday is shown. The operator was said to have clicked the PACOM (CDW) State Only link instead of the drill link

The mistake was corrected by government agencies on Twitter 12 minutes later but it took 38 minutes for another phone alert to be issued confirming to residents that it was a false alarm. Some say they never received a second phone alert at all.

After the incident, the agency began requiring two people to sign off on the transmission of tests and alerts. It drafted a correction that it will be able to send immediately if someone accidentally sends a missile alert in the future.

U.S. Sen. Brian Schatz, a Democrat from Hawaii, told the committee he was introducing legislation that would make it clear that the authority to issue missile alerts rests with the U.S. departments of defense and homeland security, not with state and local governments.

‘It is increasingly clear to me that if we get all 50 states and all the territories and 3,007 counties across the country participating in this program, the likelihood of another mistaken missile alert as a result of human or bureaucratic error is not zero,’ Schatz said. 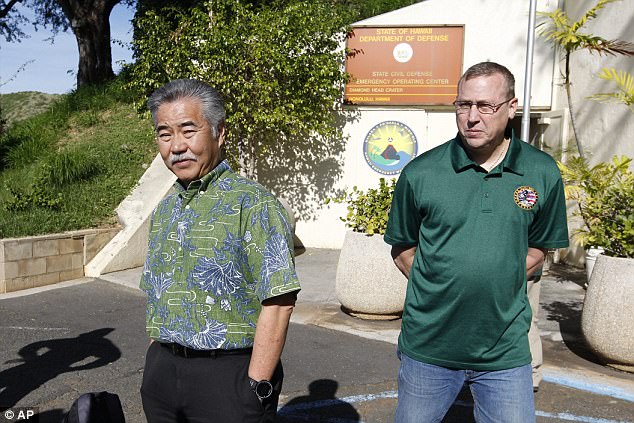 Some changes have already been made, including requiring two people to approve emergency alerts.

Nielsen told a Senate panel the department had been unaware that Hawaii officials did not have a mechanism in place to address false alarms and retract them.

Hawaii officials said they had to wait for approval from the Federal Emergency Management Agency to send the missile alert retraction.

Ige also said that he had requested the ability to test the mobile alert system, but that the effort had been ‘blocked nationwide.’