Ben Gallizzi, energy expert at Uswitch.com, told FEMAIL: ‘Cooking in a conventional oven is one of the most common ways to prepare dinner, but it is often more expensive to run than other kitchen appliances.

‘Ovens are usually large enough to cook multiple dishes at the same time, so there’s a lot of energy being wasted if you’re only cooking on one shelf.

‘Air fryers are much more efficient as they tend to be smaller than ovens, and their quicker cooking time means they use less energy overall.

As a general rule, when cooking a meal in an air fryer, you can halve the time you would typically use in an oven. Similarly, microwaves cook much faster than an oven and so use far less energy and will save you money.’

A plunging pound, soaring energy bills and food inflation – with shoppers now paying 10.6 per cent more than they were a year ago – have all conspired to make millions of families fear for the winter ahead.

As the cost-of-living crisis takes hold, sales of air fryers, which use less energy than both a conventional oven and a microwave oven, have soared as families try and trim the fat in the kitchen.

The compact kitchen appliance, which retails at anywhere between around £40 and £400 – for models which include additional features such as steamers and mini-grills – works by baking food place into its basket at a high temperature – usually 200 degrees – with a high-powered fan circulating the heat.

Air fryers have been growing in popularity in recent years, largely driven by health-conscious cooks who want all the crisp and crunch of a deep fat fryer without the grease – food cooked in them requires a minimal amount of oil.

However, since concerns over growing energy prices first began at February’s end, when the invasion of the Ukraine by Russia began, sending energy prices spiralling, air fryers are now being snapped up by the cost conscious.

They’re also time efficient – a chicken breast takes around 15 mins to cook, where in a conventional oven it might take 20 to 25 minutes.

A minute steak? Two minutes on each side…while a baked sweet potato can be ready in less than 20 minutes.

FEMAIL put a Tefal EasyFry 3-in-1 air fryer, which retails with AO.com at £180 – and comes with a grill and steamer – through its paces, ditching the oven for a week to see how recipes including a roast dinner with rhubarb crumble, jacket potatoes and falafel tasted in comparison to conventional cooking.

The air fryer’s basket is roomy enough for a medium sized chicken and while the skin looked a little bronzed after 60 minutes at 200 degrees, it was moist on the inside 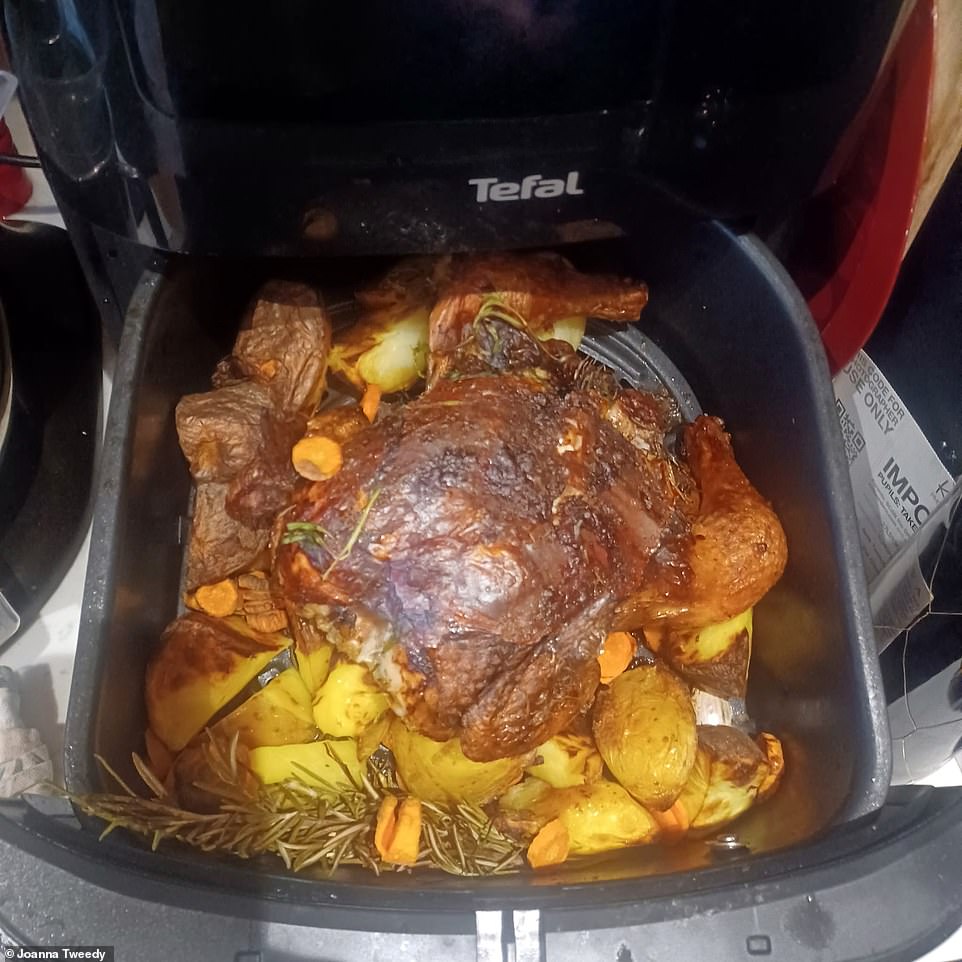 The roast potatoes, herbs and other veg were put in with 30 minutes’ cooking time left…and looked well done by the time the timer beeped to say the cooking had finished 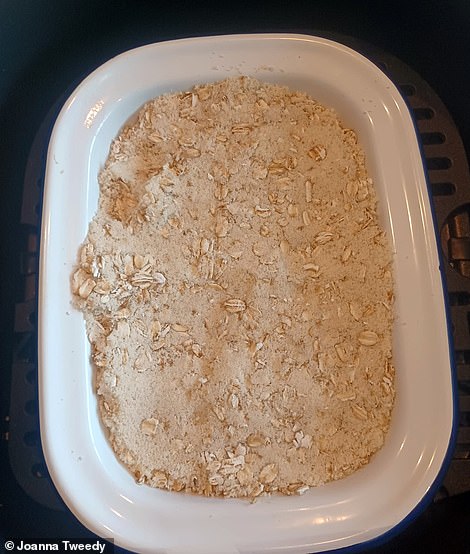 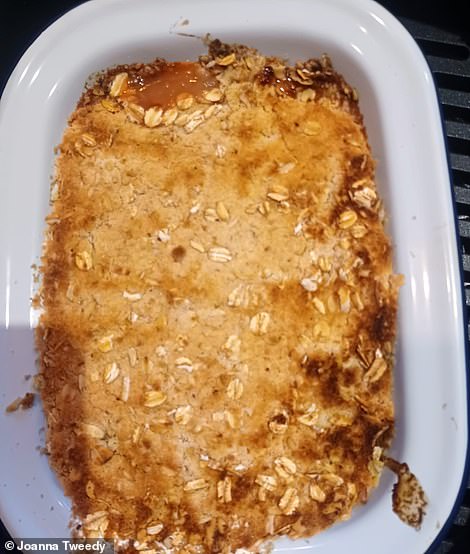 Forget easing in gently to the world of air frying, this novice decided to go for a full Sunday roast – bar the gravy (cooked up on a hob) – as the first meal cooked in our fancy new appliance.

The basket, which holds up to 1.6kg of food, comfortably held a medium-sized bird. Fearing the high temperatures and lack of oil, I added a knob of butter to the chicken, plus plenty of seasoning and put it on 200 degrees for 60 minutes. Around 30 minutes in, I added potatoes, carrots, courgettes and onions, plus a couple of rosemary sprigs and more seasoning. Fearing the onions and courgettes might be cremated, I kept a careful eye…and it’s fair to say that the roast looked suitably well done by the time the 60 minutes was up. 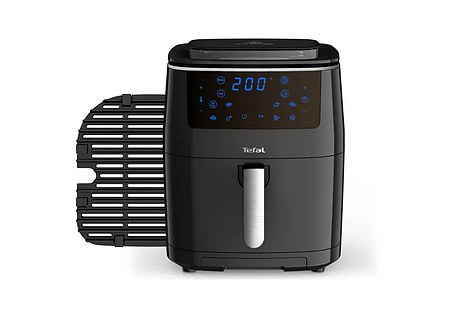 FEMAIL’s Jo Tweedy put a Tefal EasyFry 3-in-1 air fryer, which retails with AO.com at £180 – and comes with a grill and steamer – through its paces, ditching the oven for a week

8/10 A pleasant surprise; I’d feared the worst because the chicken looked a little too bronzed, but it was juicy and well-cooked on the inside and tasted just as if it had been made in a conventional oven. The veg – equally delicious. Did we miss cauliflower cheese? We did…but it was a small price to pay. Serving four, with leftovers the next day, it was deemed a success, the only downside being the kitchen didn’t smell as divine as it would ordinarily with a roast – the aromas were clearly well contained.

9/10 A rhubarb revelation; this pud was cooked in just 15 minutes and we loved the slightly crunch top the air fryer gave it.

This felt like a super healthy Monday night dinner; with around 10 minutes prep to the recipe – which used a small onion, a garlic clove, a 400g can chickpea and coriander, cumin and parsley – with an egg to bind it all together.

7/10 Served in a wrap with salad and some chilli harissa, these chickpea dreams were tasty – but didn’t quite taste like the falafel that I know and love. They were a little dry, and I’d probably add an additional glug of olive oil into the mixture next time. 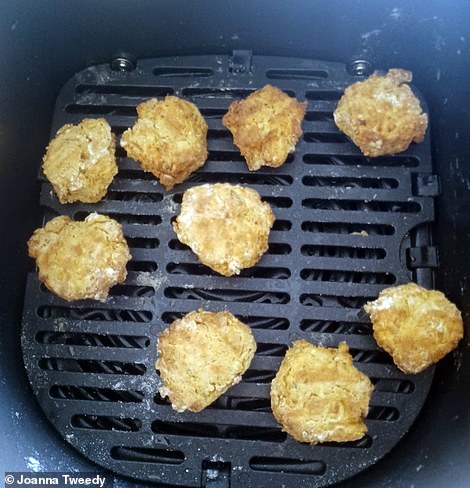 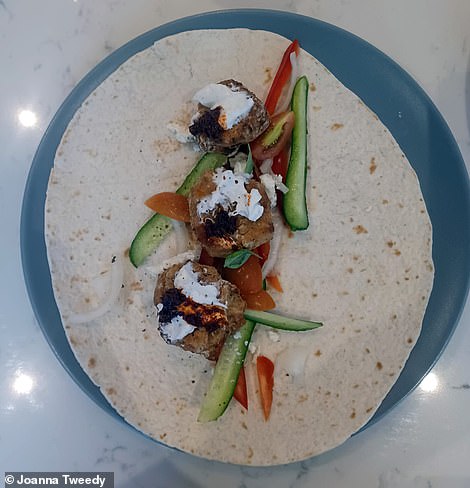 A little too crunchy…but packed with flavour. Falafels in the air fryer felt easy and healthy…but a little dry without a harissa and yoghurt to moisten them

Sausage, chips and salad was on the table in 25 minutes, with minimal fuss. The sausages produced a decent amount of fat, none of which ended up on our plates – draining through the grill into the bottom of the basket. I added just a little oil to the chips. 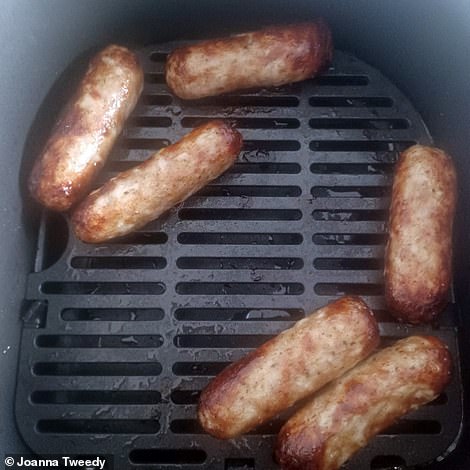 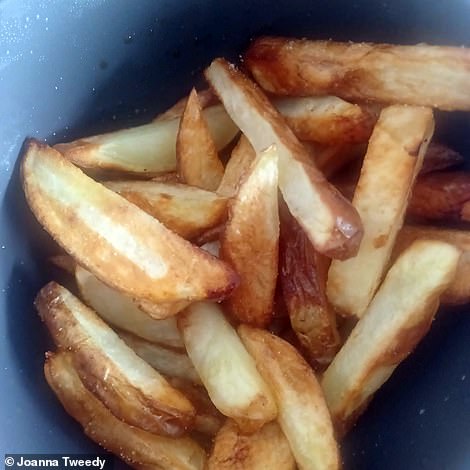 A packet of sausages was cooked up in just 15 minutes, and chips turned out particularly well – healthier than your average fried chip…but really crispy

9/10 Sausages: These looked and tasted like proper sausages, browned all over and again moist on the inside

9/10 Chips: The one dish that most people agree an air fryer cooks superbly…these were a total hit, a spot-on home cooked chip – with less fat than if they’d been cooked in a deep fat fryer. 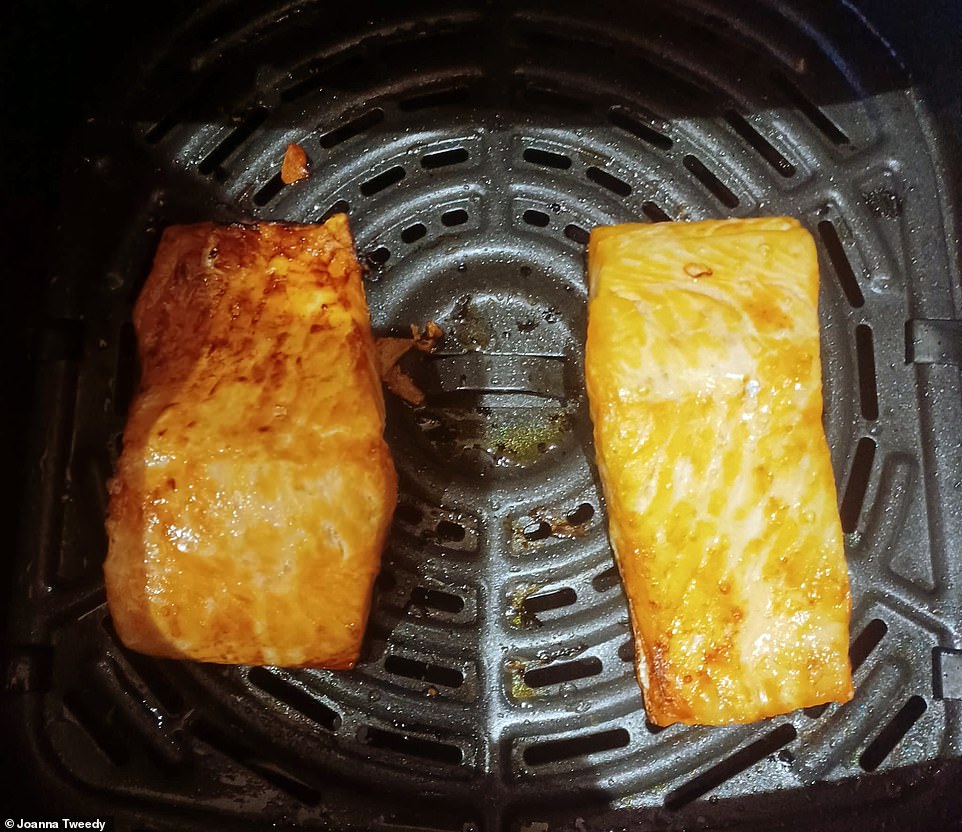 Salmon – no fishy aroma because the air fryer hides cooking smells well, and a decent colour of the omega 3-packed fish

Two salmon steaks, served up with broccoli and brown rice – both cooked in the steamer that comes with this air fryer – felt like a virtuous Wednesday dinner.

9/10: Possibly the biggest win was that the kitchen didn’t smell of salmon – the air fryer hides cooking smells well. The steaks weren’t dry at all – as I’d feared – but did have a really appetising colour. Marinated salmon, tried a few nights later, worked just as well.

We could have cooked these two thinly sliced cuts of steak on a hob but opted to try it in the air fryer…they’d been marinated with chimichurri sauce, which held well even after turning. The roast veg were 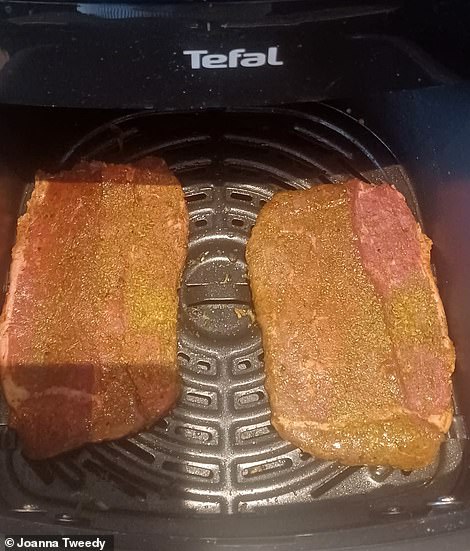 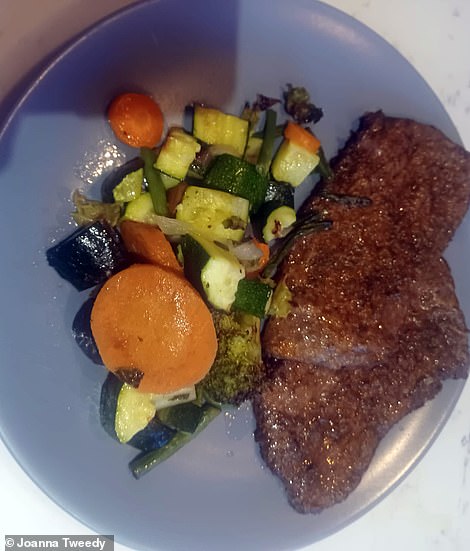 7/10: Minute steak: This didn’t quite keep the flavours in the way that a pan-fried steak manages to – it doesn’t have the same ‘char’ in the air fryer – but was definitely still tasty.

9/10: Roast veg: Chop and shove them in the basket with oil, lemon juice, garlic and salt and pepper and you’re away – gently charred for added flavour

DISH: A HEALTHY FRY UP

The rashers went in first, followed by the tomatoes and mushrooms and finally the egg…and it was the quickest fry up ever, although not all the elements worked – I think it takes practise! 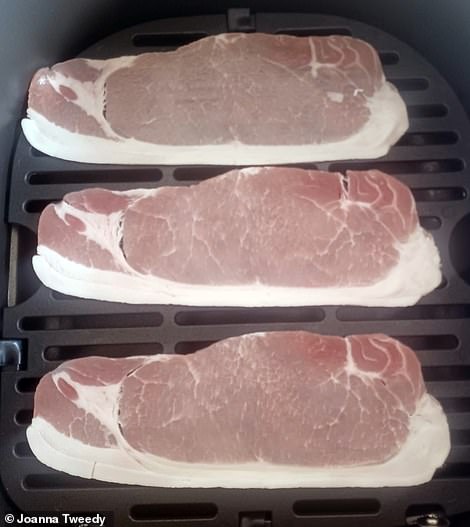 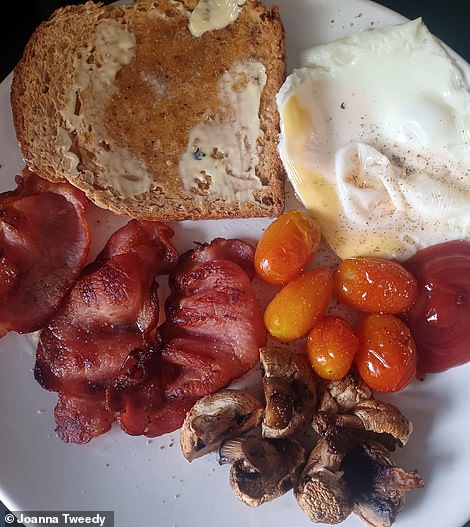 An air fryer could be God’s gift to bacon – it emerges crispy and tasty…while the egg on the other hand, was a little disastrous

7/10: The egg didn’t go to plan…and came out looking exactly like an egg shouldn’t – but lots of people have had successes with frying eggs so the cook was almost certainly at fault. The bacon was brilliant – so crispy and without off-putting excess grease. Ditto the tomatoes and mushrooms.

LET BATTLE COMMENCE: HOW AN AIR FRYER COMPARES WITH AN ELECTRIC OVEN ON ENERGY USE WHEN IT COMES TO COOKING SAUSAGES

THE BANGER TEST: COOKING SAUSAGES IN AN AIR FRYER VS AN OVEN

Source: Uswitch.com. Cost of electricity based on current price cap 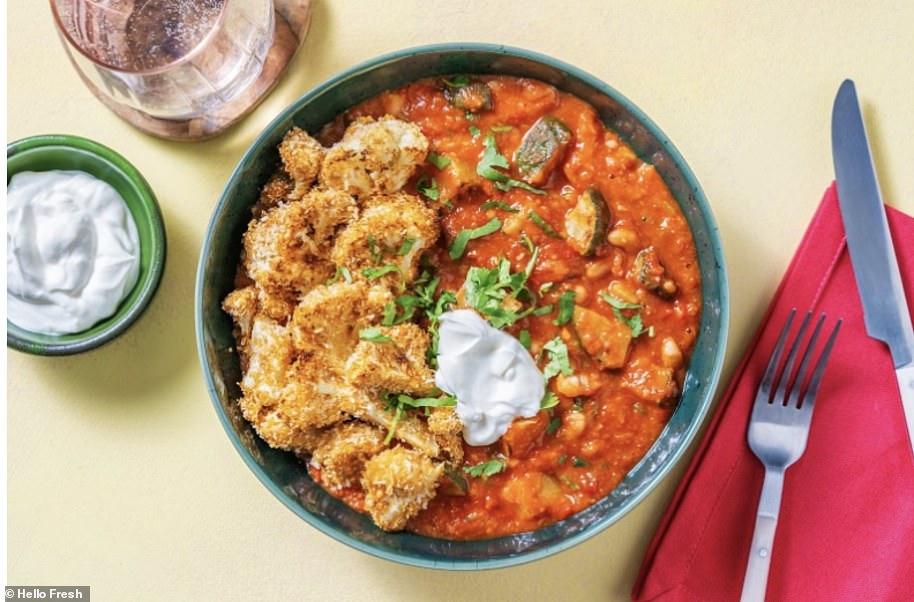 Try to keep them from touching so that the heat is evenly distributed and cook on 180° for 5-7 minutes. Serve the crispy nuggets fresh out of the air fryer with a hearty bowl of stew for an updated take on winter warmers

After you’ve coated your cauliflower in panko breadcrumbs and flavoursome Central American spice, add the florrettes to your air fryer basket with a light spray of oil in a single layer. Try to keep them from touching so that the heat is evenly distributed and cook on 180° for 5-7 minutes. Serve the crispy nuggets fresh out of the air fryer with a hearty bowl of stew for an updated take on winter warmers. 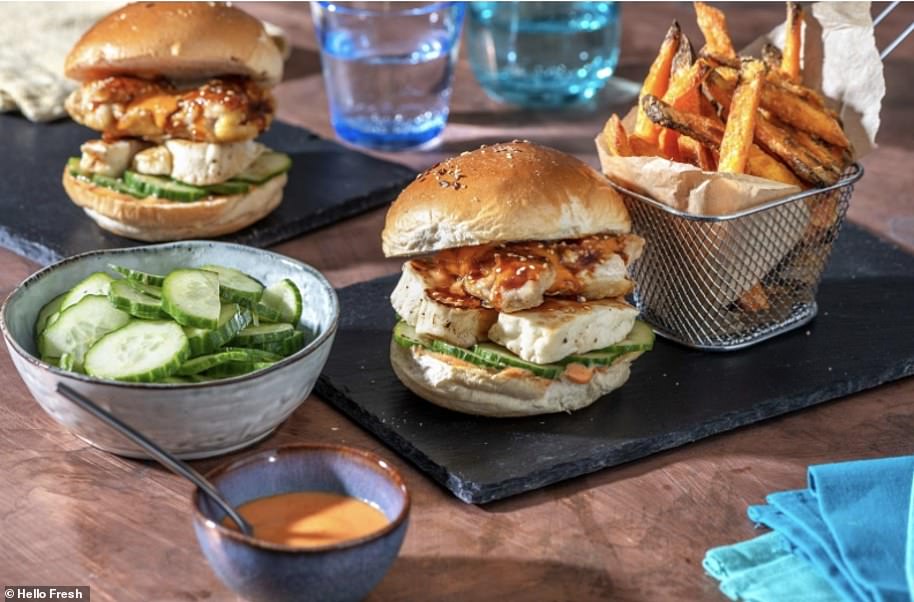 Halloumi is a staple when it comes to air fryer recipes so this Korean-inspired burger is the perfect match for your new favourite kitchen appliance. First, coat your chicken thighs in cornflower before laying them down in your lightly oiled airfryer basket and cook for about 10 minutes on each side. When your thighs have about 6 minutes left, add the halloumi and cook for 2-3 minutes on each side. Once cooked, layer your chicken and halloumi in a bun with sticky sesame sauce followed by pickled cucumbers and sriracha mayo for a tasty kick. 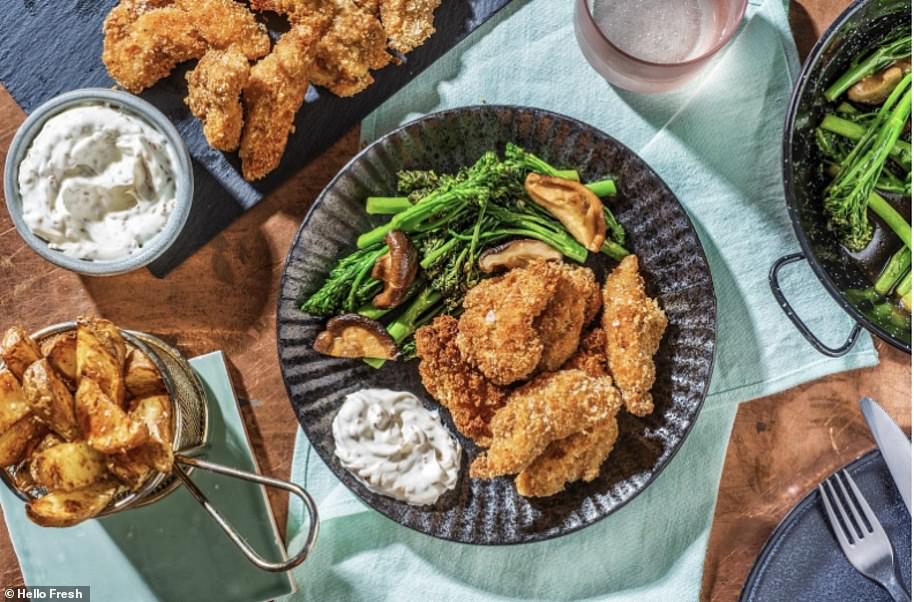 This fusion dish is the ultimate air fryer recipe, with almost every element of the meal suitable for air frying. Create fresh potato wedges that are crisp on the outside and fluffy in the middle by spraying your air fryer basket, laying your wedges in and cooking for around 15 minutes at 200°. Dip your chicken thighs in the cornflour batter before coating in panko breadcrumbs and replace shallow frying by laying the thighs in the lightly oiled air fryer and cooking at 200° for 25-30 minutes. 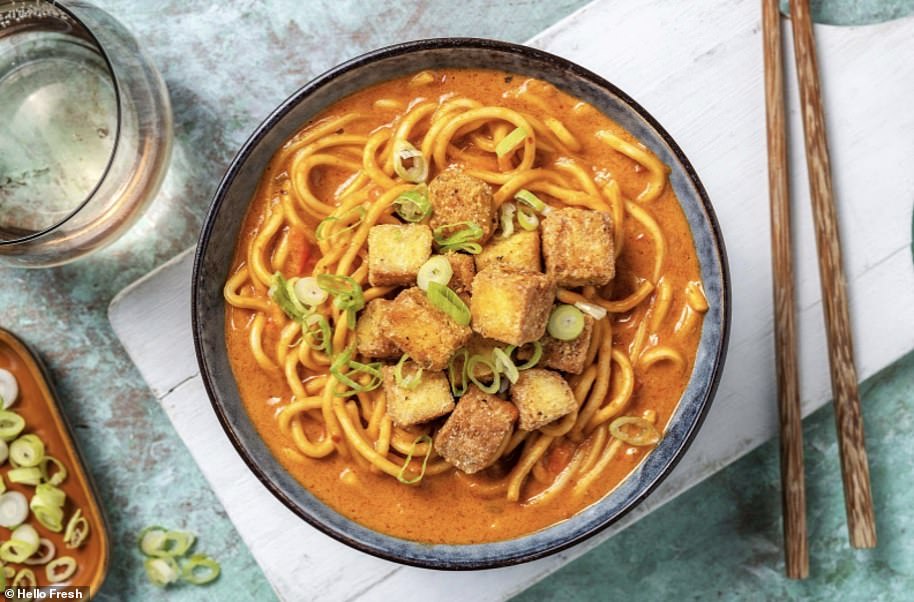 Cube the tofu before coating in a panko breadcrumb batter and pop it in the air fryer to finish off with a light spray of oil. Cook for 10-15 minutes at 190°

Enjoy a bowl of this South-East Asian soup on colder days. Tofu can be notoriously difficult to crisp and cook to perfection but throwing it in the air fryer is a simple way to prepare this veggie protein. Cube the tofu before coating in a panko breadcrumb batter and pop it in the air fryer to finish off with a light spray of oil. Cook for 10-15 minutes at 190° before serving on top of your laksa noodle soup. 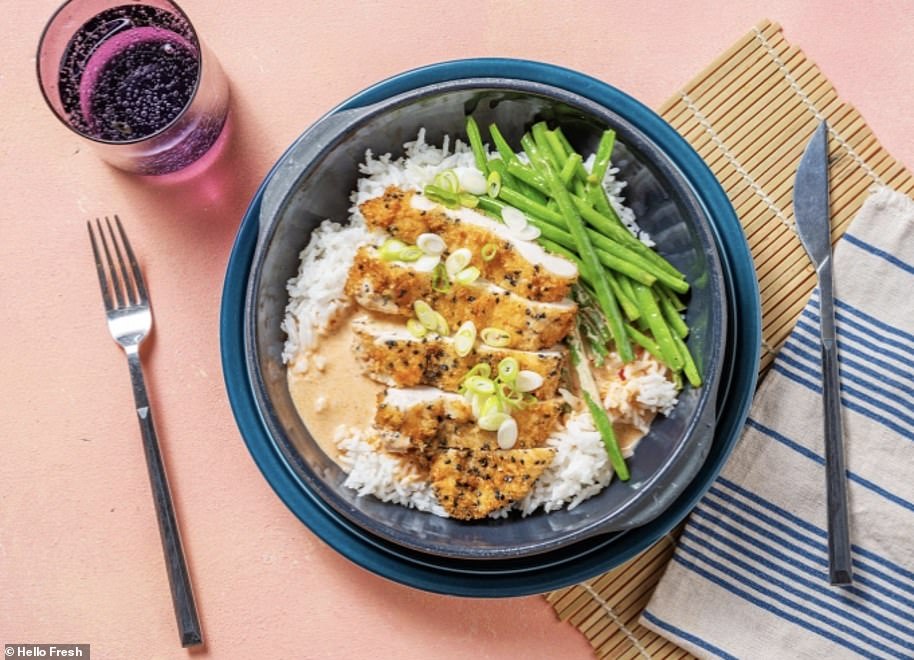 Pop in the air fryer at 200° with a light spray of oil for 25-30 minutes, turning half way to make sure both sides are evenly cooked. erve with fluffy rice and a thai-style red sauce

For golden, crispy chicken, flatten your chicken breasts before dipping them into beaten eggs and coating in panko breadcrumbs and black sesame seeds. Pop in the air fryer at 200° with a light spray of oil for 25-30 minutes, turning half way to make sure both sides are evenly cooked. Serve with fluffy rice and a thai-style red sauce with garlicky green beans.