A corrupt prison officer who fell in love with an inmate at a men’s jail, and sent sexually explicit videos of herself to him on a phone she smuggled in, wept as she was jailed for eight months.

Jennifer Gavan, 27, of Seventh Avenue, Llay, Wrexham, pleaded guilty to misconduct in public office between April and July 2020 at HMP Berwyn, a modern jail for more than 2,000 men in the Welsh city.

Gavin broke down in court, accused of entering into an inappropriate relationship with prisoner Alex Coxon, now 25.

She had accepted £150 to bring a mobile phone into the jail and communicated with him via a phone held illegally in Berwyn.

Judge Niclas Parry said there were references for her. But he declared: ‘I express my surprise that employees at HMP Berwyn are writing in support of her and are critical of other employees at Berwyn. That is a matter I think should be brought to the attention of the authorities at the prison.’

Coxon, of Rhys Avenue, Kinmel Bay, who had convictions involving drugs, robbery and attempted robbery, was jailed for ten months after he admitted having a prohibited item in Berwyn.

Prosecutor David Mainstone at Mold crown court said prison authorities received intelligence of a possible relationship. A phone was found hidden under a prison laptop in Coxon’s cell and ‘explicit’ images discovered of a woman.

Gavan accepted contact with him using Snapchat, sending a snap of herself and kissing the inmate.

Mr Mainstone said she refused to disclose the PIN for her mobile phone. But Gavan had made ‘sexually explicit’ videos of herself. Call data showed contact between the tattooed pair. 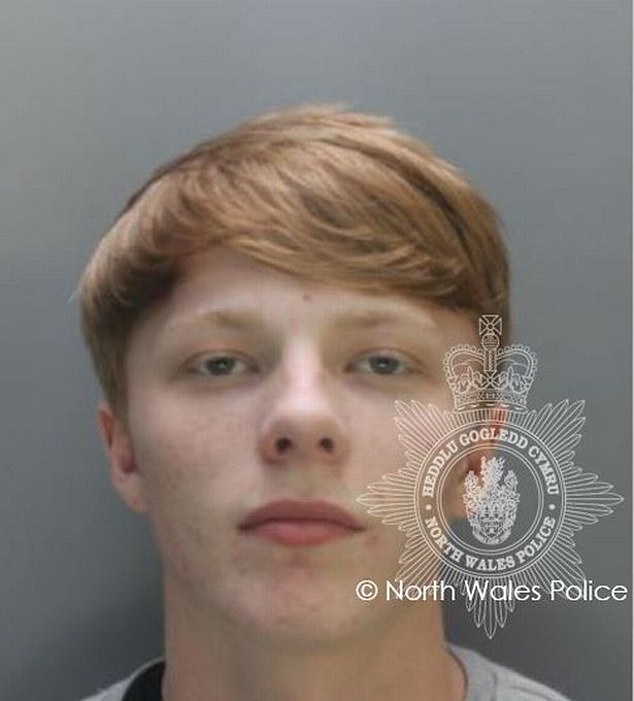 Alex Coxon (pictured), who had convictions involving drugs, robbery and attempted robbery, was jailed for ten months after he admitted having a prohibited item in Berwyn

Defence barrister Maria Masselis said Gavan, dressed in black, had come to court with a packed bag. ‘She knows the position she faces. She can’t take any more waiting for her fate,’ said counsel.

‘She still struggles to explain why and how she came to be doing the things that she was doing. It was obviously a particularly low point in her life. She had just come out of a very lengthy relationship.’

Miss Masselis said Gavan had ‘self-esteem issues’ but was particularly empathetic towards inmates during Covid lockdown, when there were no family visits. ‘She felt ill-equipped to deal with a wing of 80 male prisoners, on occasions on her own for periods of time.’

The barrister said there was ‘immaturity and an element of naivety’ and Gavan felt ‘manipulated’ into believing she was in a relationship with Coxon. She’d expressed love for him and sent images.

Gavan, a former shop assistant manager, had been raised by an upstanding family. She had formed a new relationship during the delay in bringing the case and had a seven months old baby son.

‘She says her conduct in relation to these matters feels as if it relates to a different person,’ counsel added. 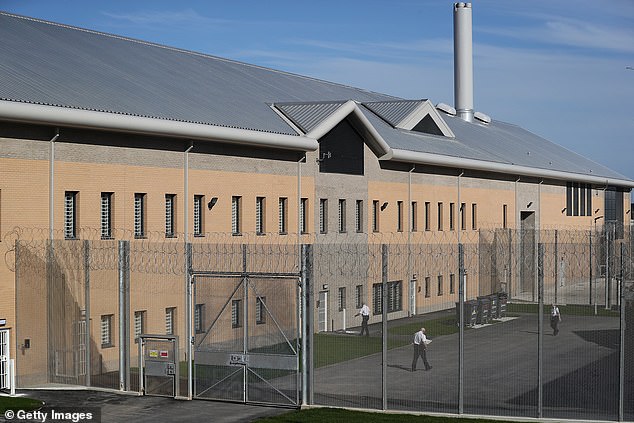 HMP Berwyn is a modern jail for more than 2,000 men in the Welsh city of Wrexham. It is pictured in 2017

Judge Parry told Gavan, who appeared in the dock after Coxon had been sentenced: ‘The courts must make it clear that prison officers who misconduct themselves will face immediate custody in almost every circumstance.’

Mobile phones undermined prison safety, he said. Judge Parry said an iPhone had been found with explicit images of Gavan and £150 had been paid to smuggle it behind bars. Coxon had served time for ‘serious matters’ but Gavan had arranged to be alone with him when he was on cleaning duty.

‘You are an intelligent young lady. You held employment involving a position of trust,’ Judge Parry said to Gavan. Her bank account showed two payments from the Coxon family totalling £200.

Judge Parry said she acted ‘entirely out of character’ and was genuinely remorseful. But he added : ‘This matter is so serious only an immediate custodial sentence can be justified.’

The court heard Coxon had been caught trying to pass a phone to another inmate, using dental floss to drag it across a corridor. Defence barrister Simon Rogers said he’d since ‘done his best to turn his life around.’

The judge said Coxon had an ‘appalling’ record.