Despite leaving impressive bitemarks, the small but ferocious cookiecutter shark primarily feeds on tiny critters like crustaceans and squid, a new study reveals.

The elusive shark species (Isistius brasiliensis) gets its name from its feeding habit of gouging round plugs of flesh from large animals, as if cut out with a cookie cutter.

The snub-nosed, cigar-shaped shark, often considered a parasite, initially attaches to its prey with rubbery lips.

It then uses its robust muscles and circular jaw to extract a chunk of flesh – acting like a toilet plunger with a blade in it, according to one expert.

Although they chomp on everything they can get their jaws on in the upper reaches of the ocean, they primarily feed on the more modest critters that they share a habitat with, the surprising new research shows.

Cookiecutter sharks are distributed throughout the world’s tropical and subtropical oceanic waters and only reach lengths of about 20 inches – making it one of the smaller shark species.

A preserved cookiecutter shark (Isistius brasiliensis) with its ferocious teeth, which act like a toilet plunger with a blade in it, according to one expert

They swim to the surface every day at dusk and descend again at dawn.

The strange-looking creature has huge eyes and sharp teeth, but measures just 22 inches (56cm) in length.

It gets its name from its feeding habit of gouging round plugs of flesh from large animals, as if cut out with a cookie cutter.

There have allegedly been a handful of attacks on humans.

Gavin Naylor, director of the Florida Museum of Natural History’s shark research program, said its bite acts like a ‘toilet plunger with a blade in it’.

‘It turns out that all these bites we see on marine mammals and larger sport and commercial fishes and things really make up a relatively smaller amount of their diet,’ said study leader Aaron Carlisle at the University of Delaware.

Carlisle noted that it is unique to have an animal that will feed on creatures from the top and the bottom of the food chain.

‘They feed on everything from the biggest, toughest apex predators — like white sharks, orcas, everything you can imagine — down to the smallest little critters.

‘These animals occupy a unique ecological role in the world’s oceans. There’s not very many animals that do something quite like this.’

In 2019, the cookiecutter shark was responsible for three shark attacks worldwide, according to the University of Florida – all of which were on long-distance swimmers training in Hawaii’s Kaiwi Channel at night.

These bites were not only restricted to animals, as submarines and underwater electrical cables were also found to have the odd-shaped bites.

The feeding habits of cookiecutters have been little studied until now – there have been only around 150 cookiecutter stomachs studied around the world over the last 50 years, Carlisle said.

Cookiecutter sharks are widely distributed throughout the world, and may be one of the more common sharks in the ocean, because they live in the deep sea. 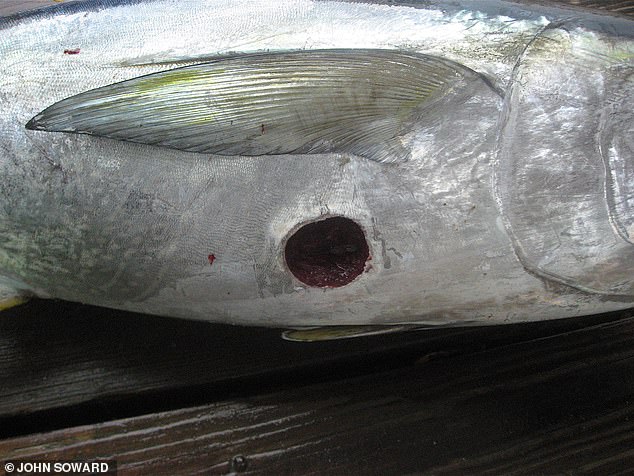 Cookiecutter sharks inhabit deep tropical waters and their bites have been found on many deep-sea animals, like this tuna recovered in the Bahamas 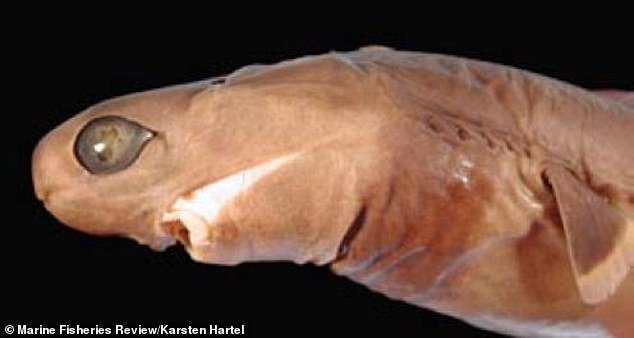 In 2019, the cookiecutter shark was responsible for three shark attacks worldwide, according to the University of Florida – all of which were on long-distance swimmers training in Hawaii’s Kaiwi Channel at night

However, they’re never held in captivity there is little known about them – especially when it comes to their eating habits.

To learn more, the researchers studied 14 dead cookiecutter sharks that were collected by the Monterey Bay Aquarium from the Central Pacific around Hawaii.

They used a variety of biochemical tracing techniques – including stable isotope analysis, fatty acid analysis, and environmental DNA – to help better understand the feeding habits and habitats of the species.

Multiple biochemical tests allowed the team to reach the most accurate possible conclusions about the cookiecutter’s diet and possible behaviour.

‘It’s important to do more than one test and the reason for that is the same reason that people want to get more than one opinion for any medical situation,’ said study co-author John O’Sullivan at the Monterey Bay Aquarium in California.

‘The broader the test range is, with their techniques and methods, the more sound you can feel, collectively, about your results, and that just helps improve the scientific methods.’

The researchers examined the sharks’ stomachs and found that they were mostly empty – but thanks to environmental DNA, they could still extrapolate information about their diets. 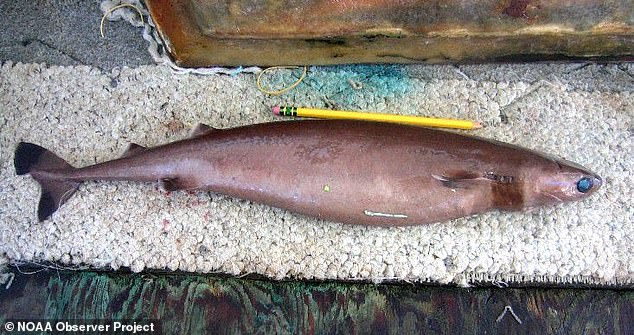 ‘Environmental DNA is an increasingly popular and powerful tool that works under the idea that, if an animal swims by in the ocean, it’s going to be shedding DNA in the water,’ said Carlisle. 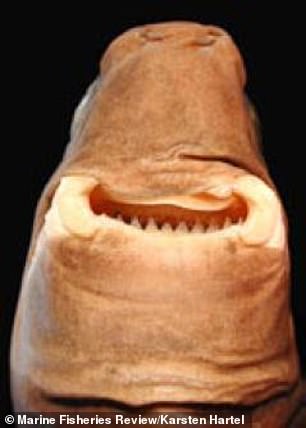 Not much is known about the cookiecutter shark, which has been described as a mysterious animal

‘So if you take a water sample and filter it out, you can extract the DNA of everything that’s been in that water mass and identify what species were there. So we tried that on their stomach contents.’

The researchers were also able to make inferences about their habitat.

The cookiecutter sharks have generally only been observed near surface waters during the night, leading researchers to believe that they exhibit vertical migration, where they ascend to shallow waters at dusk and return to deeper waters at dawn.

However, this might only be the case for the larger cookiecutter sharks, whereas the smaller, baby sharks might not vertically migrate at all.

‘The little guys, we think that they may stay down deep,’ said Carlisle.

‘It appears that they don’t start going up to the surface until they get to be a certain size, – but again, nobody’s ever really seen a baby cookiecutter shark so we don’t really know. 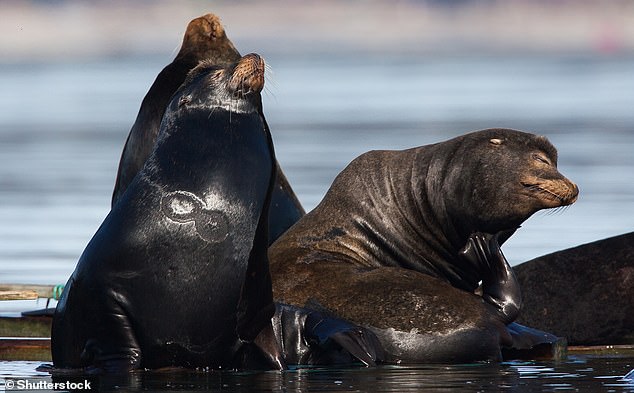 California sea lions (Zalophus californianus) in Fanny Bay, Vancouver Island, British Columbia, Canada. The one on the left has scars from a cookiecutter shark bite

‘We’re trying to make these inferences based on indirect metrics of what they’re eating and what their ecology is.’

With the deep ocean increasingly being exploited by fisheries and other industries, it is important to continue to advance the knowledge of these deep-water species, Carlisle added.

‘Most of the animals that live in the deep sea, we call it life in the slow lane. They live a long time, and they don’t make very many babies,’ he said.

‘Most of these deep sea animals are the poster children of things you don’t want to fish for because they just don’t have the ability to reproduce very quickly and rebound after being exploited.’

The new study has been published in Scientific Reports.

The elusive, foot-long cookiecutter shark was responsible for three of the 64 unprovoked shark bites on humans in 2019, according to the University of Florida’s International Shark Attack File.

All three bites were on long-distance swimmers training in Hawaii’s Kaiwi Channel at night.

The ISAF’s more-than 6,400 records only contain two other accounts of unprovoked cookiecutter bites on live humans – one in 2009 in Hawaii’s Alenuihaha Channel and one in 2017 in North Queensland, Australia.

The snub-nosed, cigar-shaped shark, often considered a parasite, attaches to its prey with rubbery lips and uses its robust muscles and circular jaw to extract a plug of flesh – ‘acting like a toilet plunger with a blade in it,’ said Gavin Naylor, director of the Florida Museum of Natural History’s shark research program.

It leaves distinct, craterlike wounds on a wide range of marine life, including tuna, seals, dolphins and even great white sharks, 10 times the cookiecutter’s size.

Not much is known about the cookiecutter shark, Naylor said.

‘They’re quite mysterious animals,’ he said. ‘While they’re found all over the world, we don’t know how many of them there are, or how exactly they create this seemingly perfect circle. They can look pretty pathetic, like a lazy sausage, but they can do a lot of damage.’