Music fans have been trying their best to cool off as they soak up the sun and revel in the wild party atmosphere at Reading and Leeds festivals as temperatures soared to a sweltering 85 fahrenheit.

Thousands of youngsters were seen leaping onto each other’s shoulders as they made the most of the glorious weather, and basked in the success of their GCSE and A level results to the sound of some of their favourite artists including Post Malone, Foo Fighters, Charli XCX and Chvrches.

A 17-year-old girl from Oldham, Greater Manchester, died at the Leeds festival in Bramham Park today at around 3.40pm. Police said she had been taking drugs.

Two men were also questioned by police after two drones flew over the Reading festival ground, on Richfield Avenue, which is only 30 miles from Heathrow airport, one of the busiest in the world.

Festivalgoers have been photographed soaking up the party atmosphere as they bask in the glorious weather. Some are also celebrating the success of their GCSE and A level results in style. This girl was pictured at Reading festival today 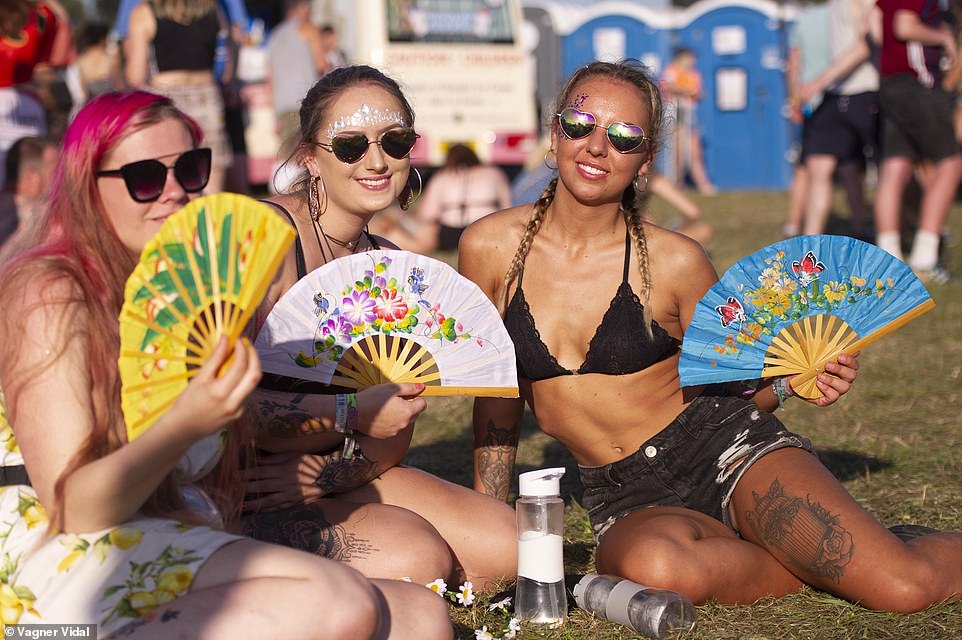 Revellers have also been seen trying to keep cool as temperatures soared as high as 85F in Reading, and up to 80F in Leeds. These girls took a break from the party and cooled themselves with fans at Reading festival 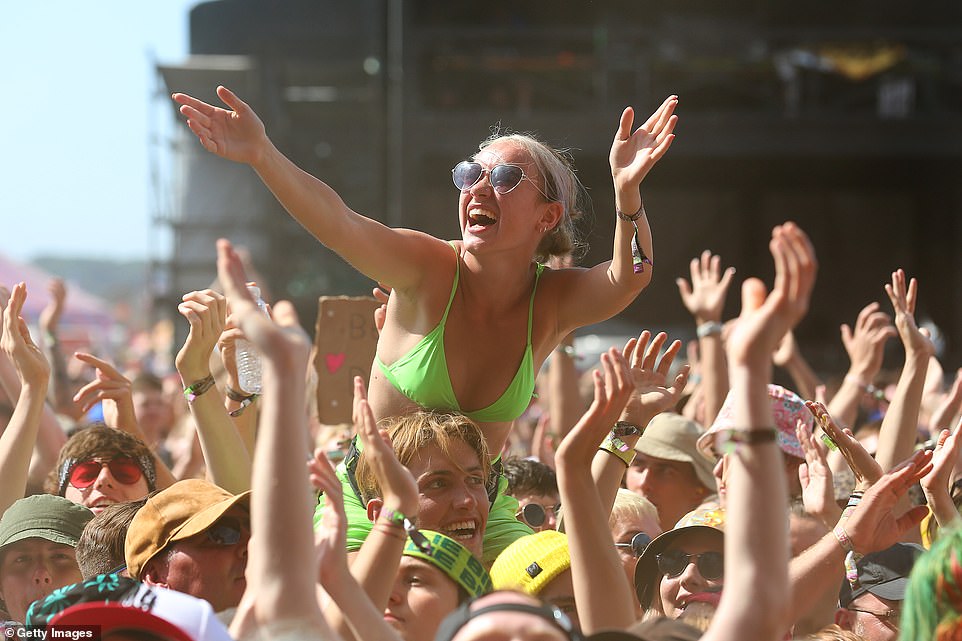 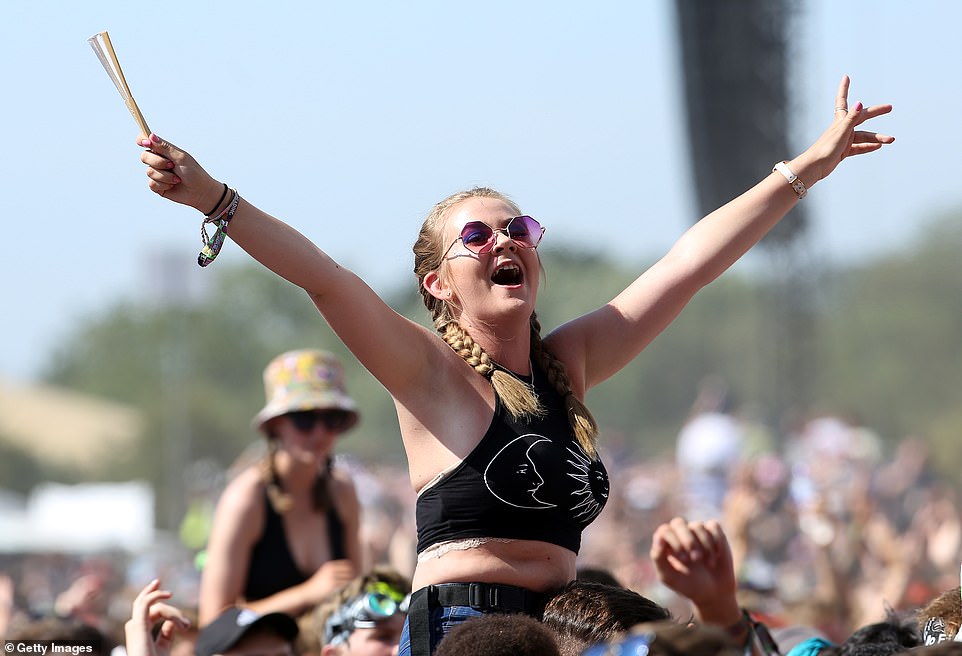 And this girl was seen cheering and holding up what appears to be a fan as she made the most of the party atmosphere at Reading festival. Some youngsters at the festival were basking in the success of their GCSE and A level results 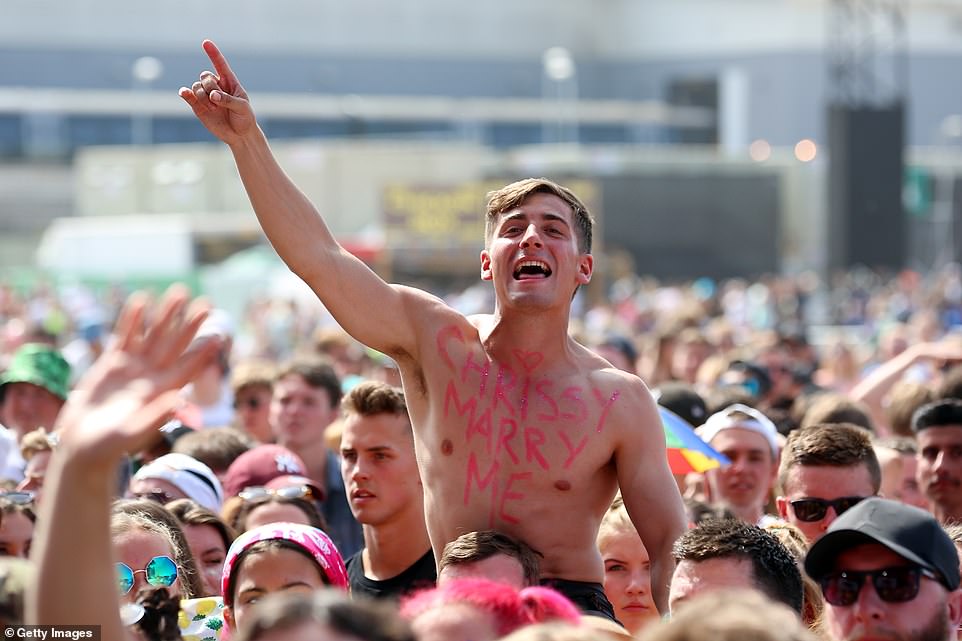 This youth, who had jumped onto his friends’ shoulders at Reading festival, had the phrase ‘Chrissy marry me’ scrawled across his chest in what appears to be body paint 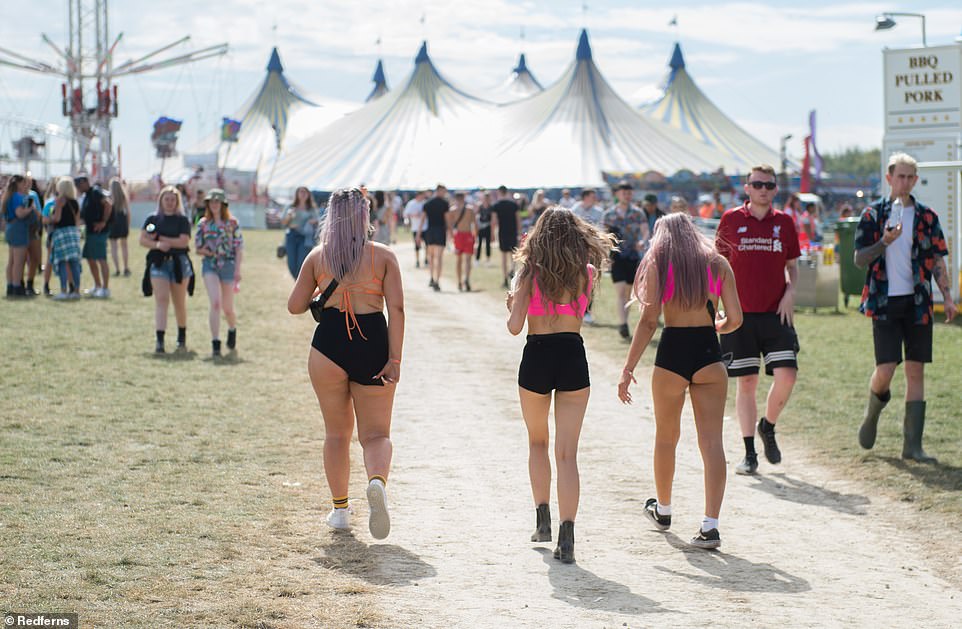 This group of girls were enjoying the scorching 80F weather at Leeds festival, held in Bramham park, as they headed towards a main tent. A 17-year-old girl died at the festival in the early hours of this morning after taking drugs

Party animals were seen lugging in supermarket trolleys, wheelbarrows and even a sledge loaded with beverages as early as Thursday, a day before either festival was due to begin.

And today the revellers, who are mostly staying in tents spread across several fields at the venue, cheered and jumped to the music at Reading festival, on Richfield Avenue, and Leeds festival, in Bramham Park.

While some took to the main stage for a wild time, others opted for a more relaxed approach and sat on the lawn using fans to keep cool or lay down to enjoy the sunshine.

Public Health England had earlier issued a call for Britons to stay in the shade and drink plenty of water over the hot bank holiday weekend, but attendees showed no sign of heeding the warning as they crowded in front of the main stage to watch the eye-catching performances.

Two men, aged 23 and 34, were arrested after their drones flew over Reading festival ground today, as a temporary airspace restriction order is in place between August 21 and 26 to ban the flying machines. 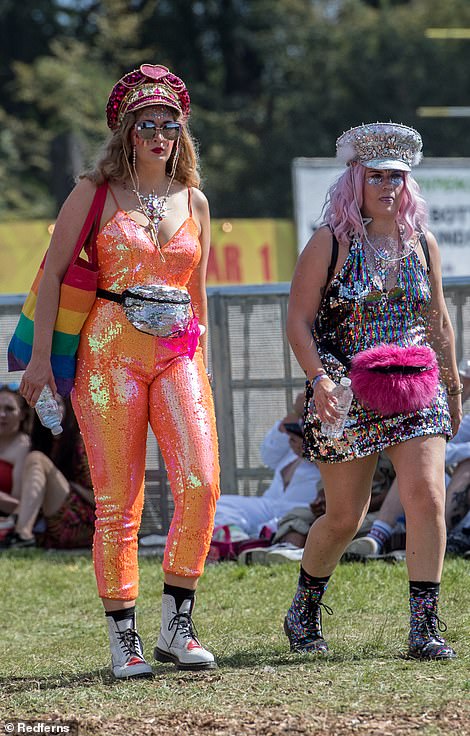 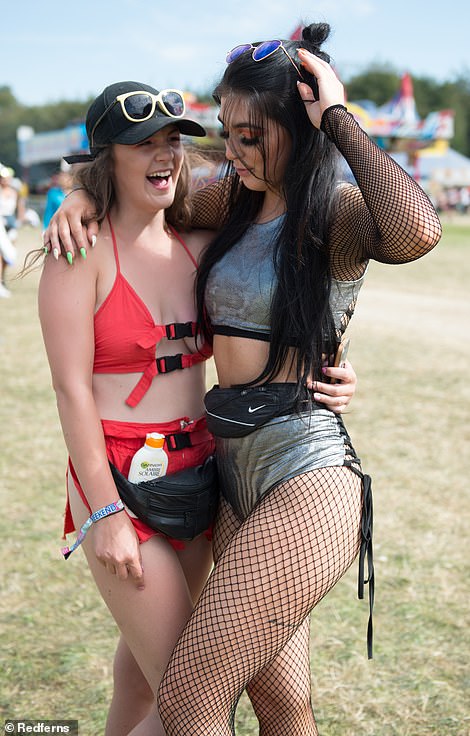 These party animals at Leeds festival were pictured walking through the festival ground as they followed the sound of the music. Two were wearing bright clothes that appeared to be sequin covered (left) while the other two friends laughed together as they posed for a photo (right) 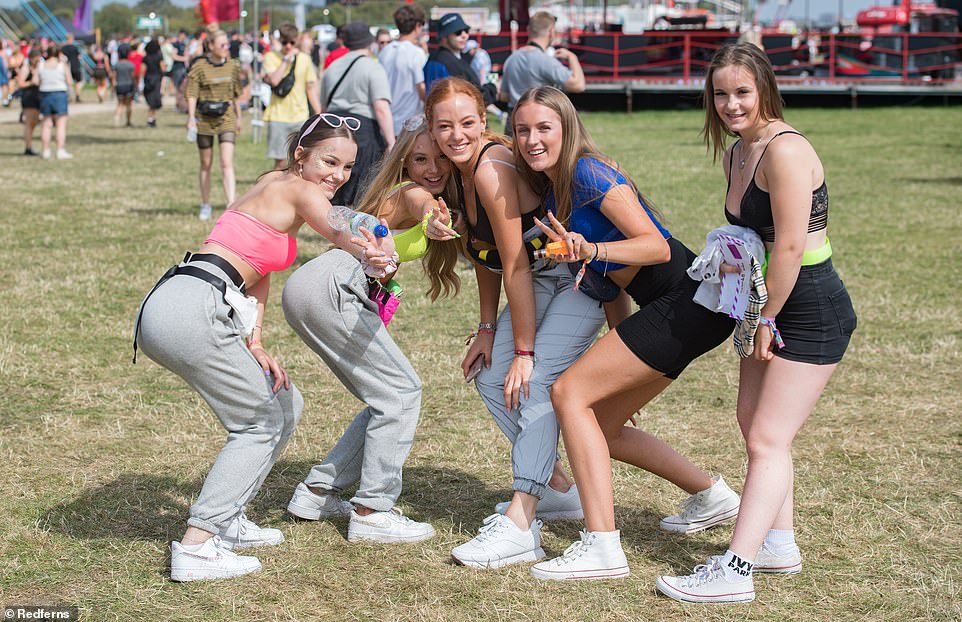 Party animals stopped for a quick photo at Leeds festival, held in Bramham Park, as the celebrations entered their second day 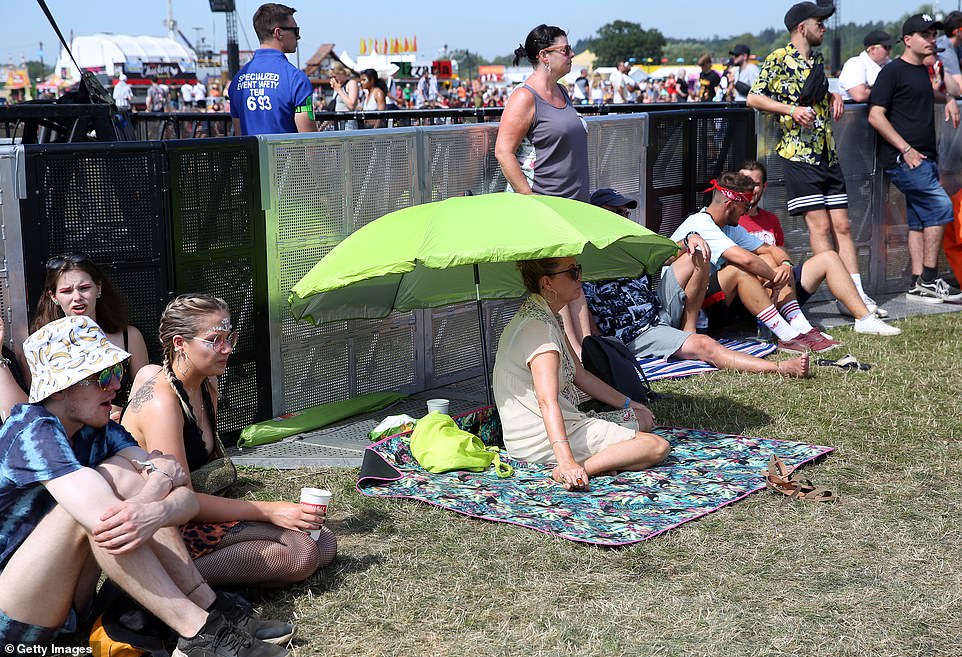 While some ignored Public Health England’s advice and sat in the sunshine, one attendee staked her umbrella into the ground so that it could provide her with temporary shelter from the rays 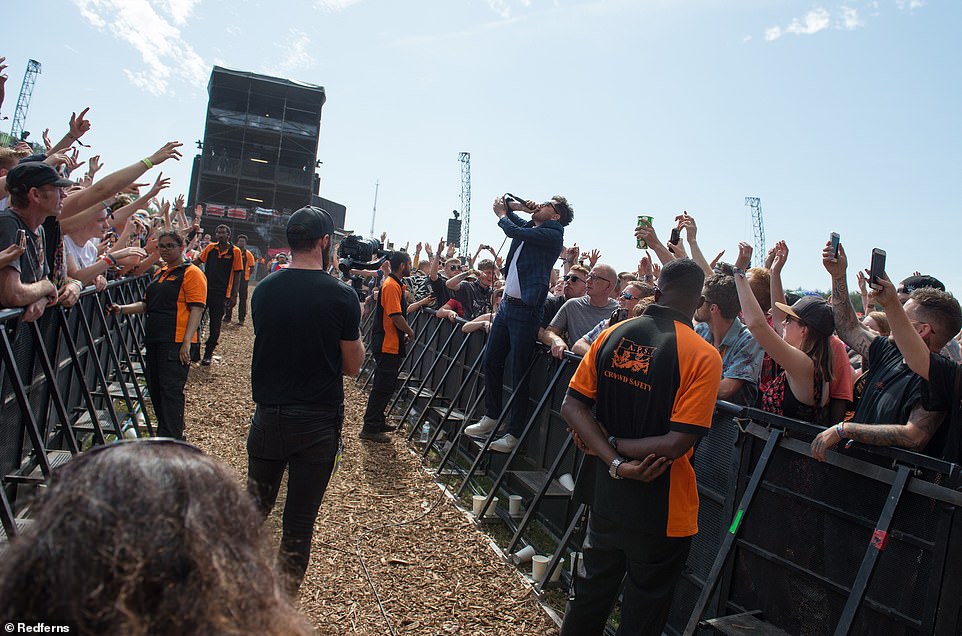 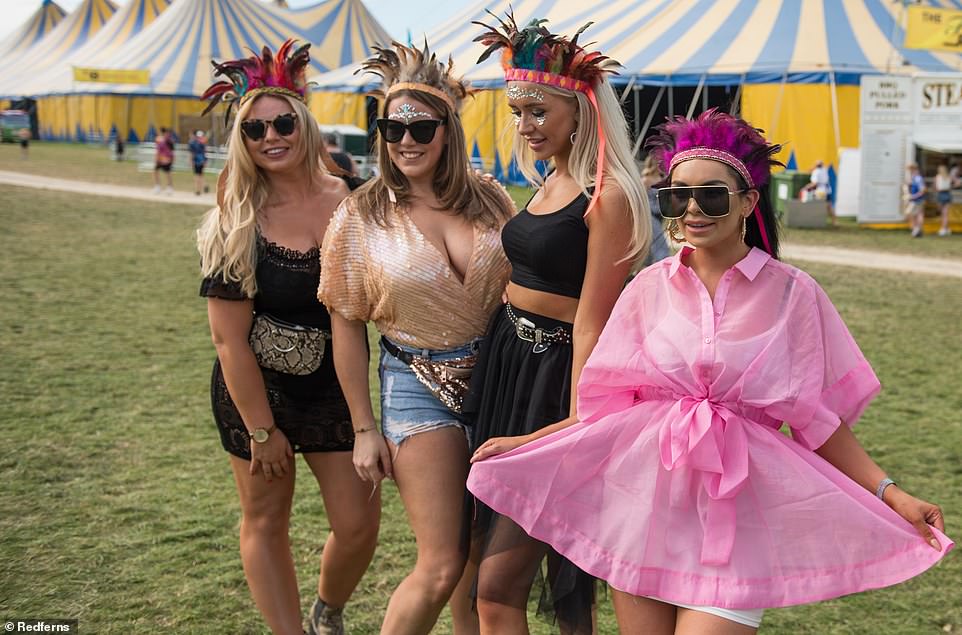 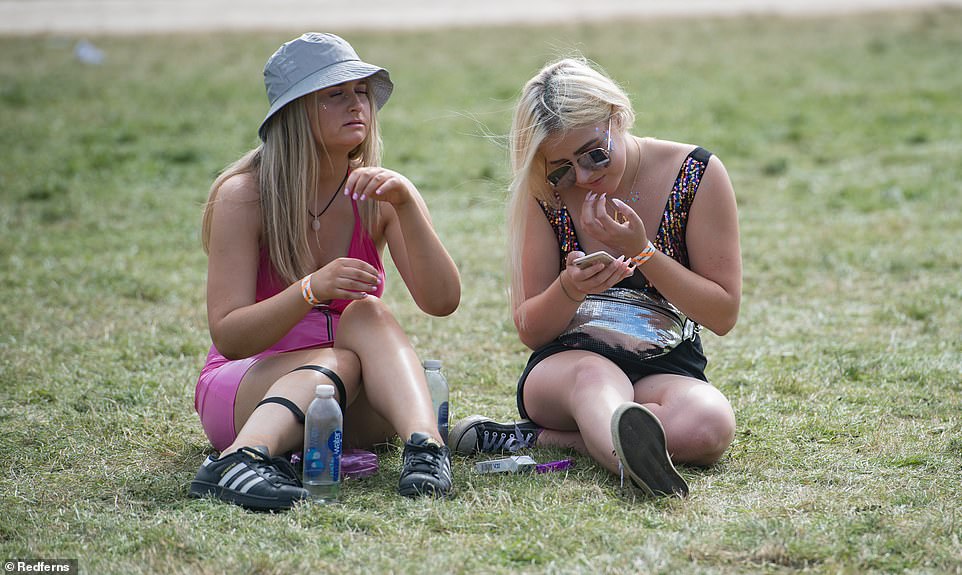 While the party raged, a few revellers decided to take a time out and headed to sit on the grass away from the action at Leeds festival in Bramham Park today

The Secretary of State for Transport introduced this ban under Article 239 of the Air Navigation Order 2016, to restrict the operation of unmanned aircraft at the Reading festival site in order ‘to protect the large numbers of people below attending the music event’ according to the Civil Aviation Authority.

Thames Valley police intervened the unauthorised drones spotted hovering over the festival site on August 22 and August 23 and both drones were seized.

A spokesman for Thames Valley police said: ‘We understand that many people enjoy using drones, but before every flight it is the drone pilot’s responsibility to check restrictions in place and ensure the safety of the flight.

‘If you fly a drone outside of the regulations in place, you could be prosecuted and your drone could be seized or destroyed.

‘Failure to fly responsibly could result in criminal prosecution and up to five years’ imprisonment.’ 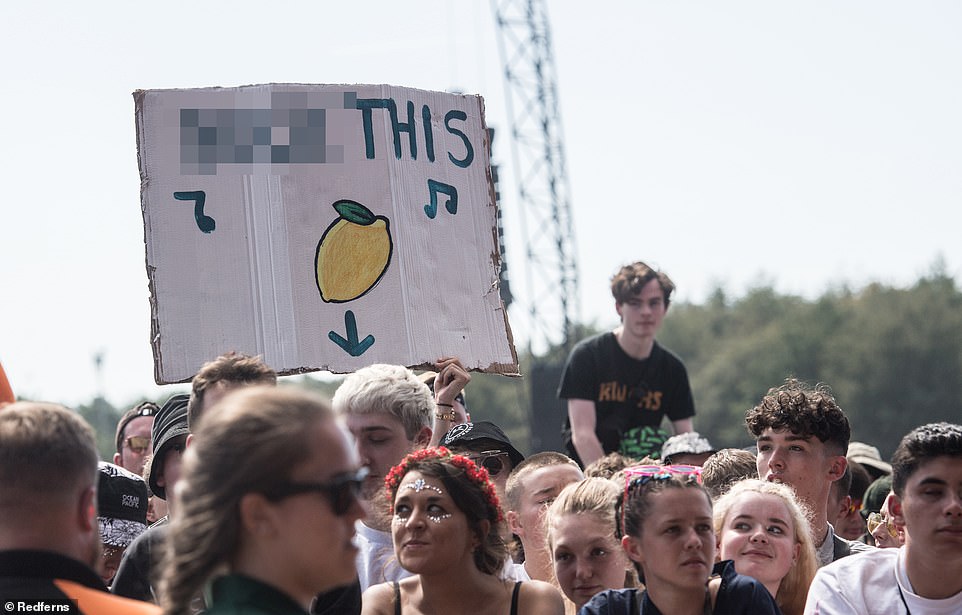 Attendees also held up signs and cheered as they enjoyed music from the 1975, the Wombats and Charli XCX at Leeds festival 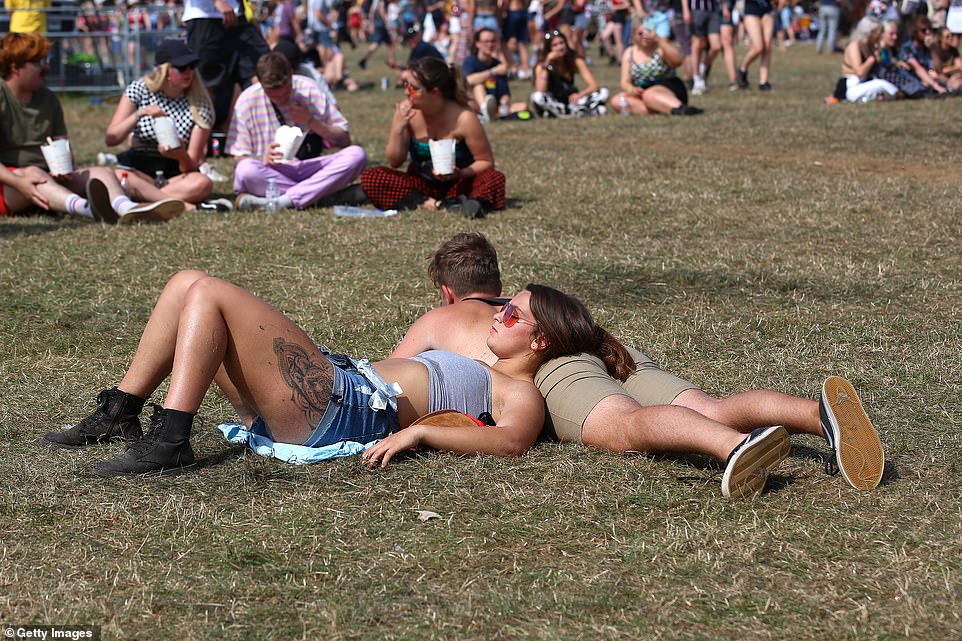 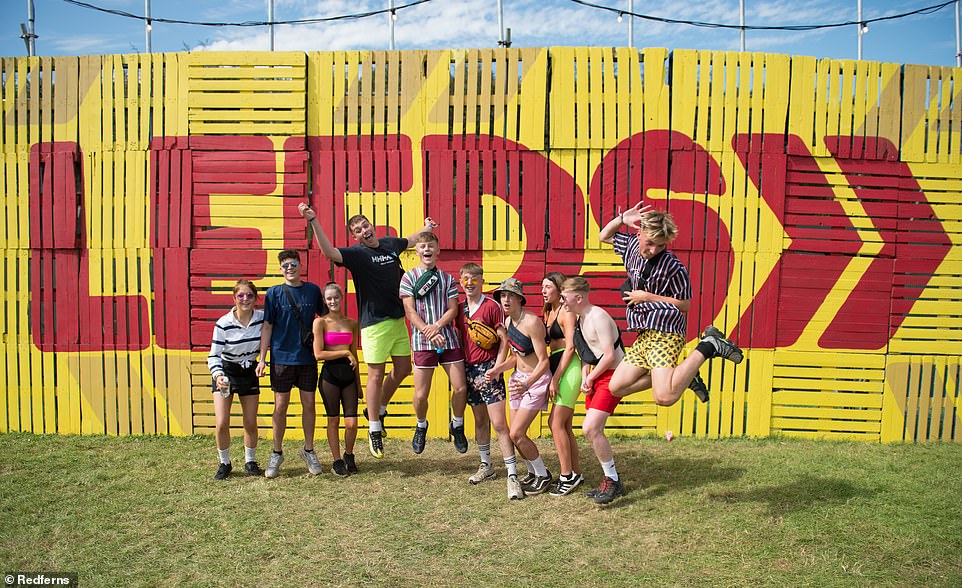 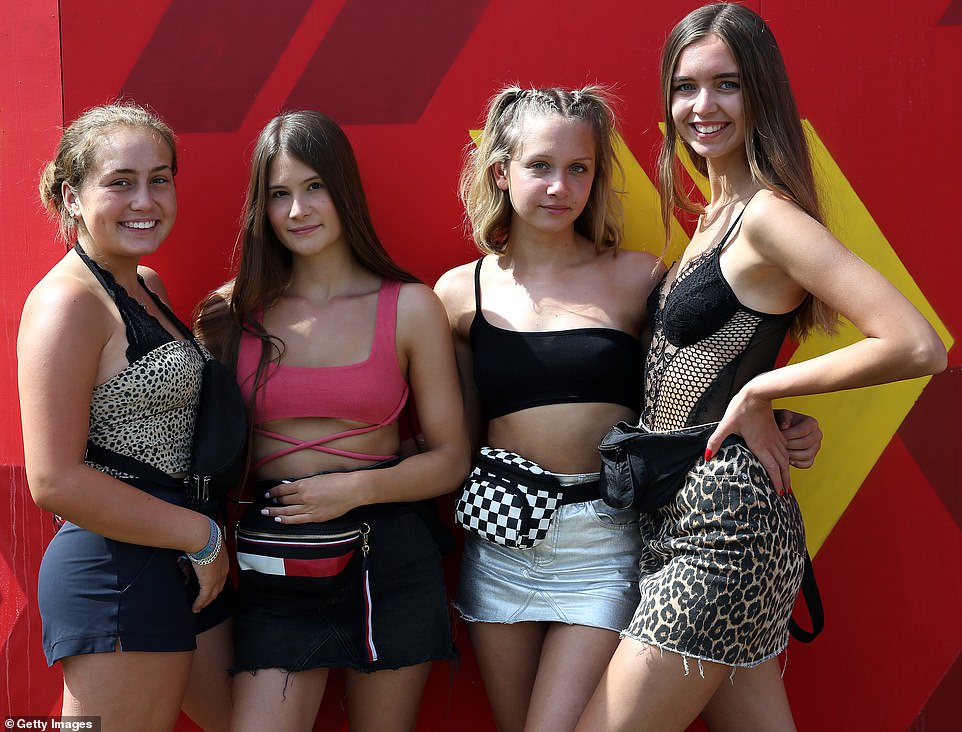 Thousands of people had turned out for both festivals. These four girls posed for photos in their party attire at Reading festival, which is being held in Richfield Avenue 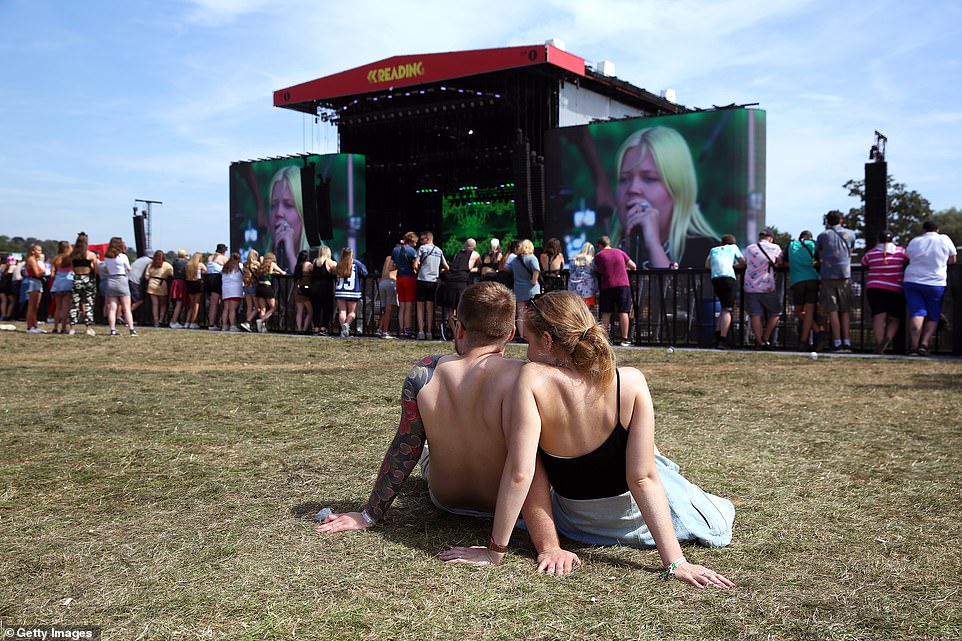 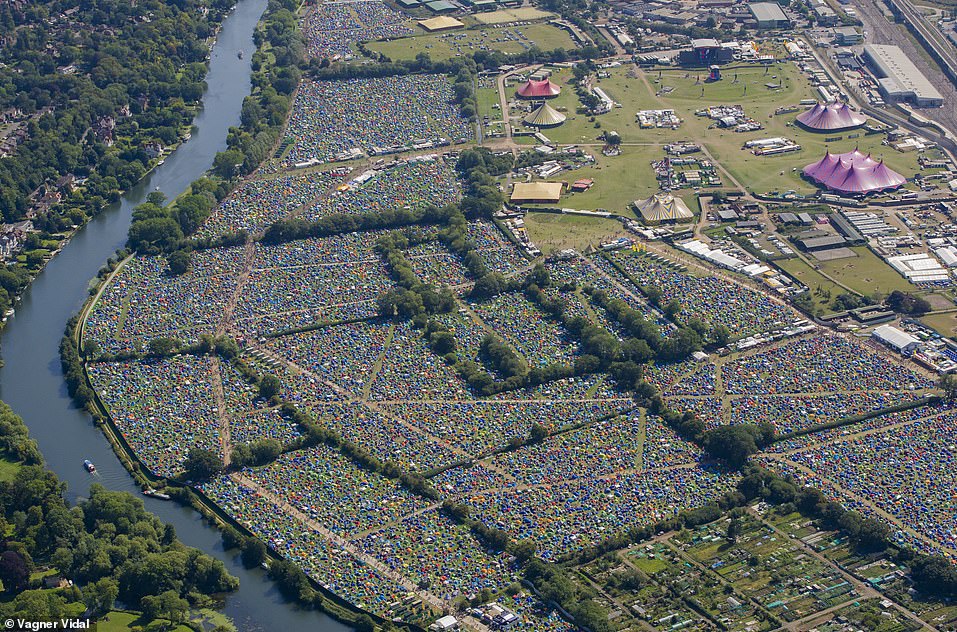 The tent city currently covers more than ten fields in Reading. Pictured on Thursday as festivalgoers prepared for the event 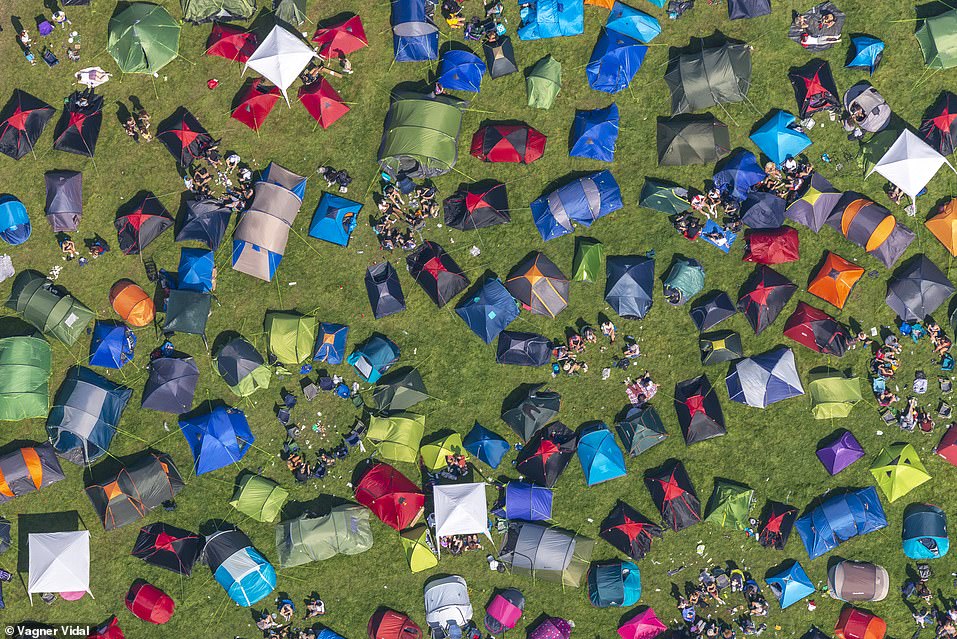 Reading festival goers pitched their colourful tents in the field. Groups of friends sat around in circles outside their tents. Some are celebrating the GCSE results that they received earlier on Thursday