The Prince of Peace is tearing people to pieces in a controversial new video game that pits holy figures from various religions against one another.

Inspired by both one-on-one brawling games such as Street Fighter II, Fight of Gods challenges players to beat the tar out of holy icons – including some prominent non-violent figures.

‘Will Jesus, fresh from ripping himself off the sacrificial cross, smite all his foes with the power of his Punishment Fist?’ the game’s developers ask. ‘Can Buddha slap his opponents into submission?’ 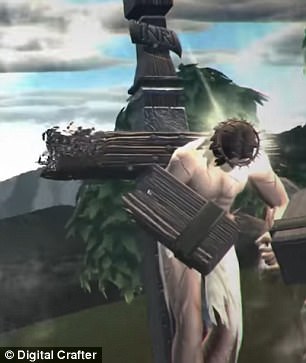 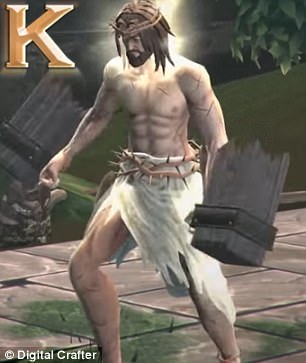 Get cross: Jesus’s brawls begin with him snapping himself off the cross – leaving chunks of it on his fists. The game is a one-on-one beat-’em-up, similar to the Street Fighter series

Apparently noting that you can’t spell ‘pacifists’ without ‘fists’, Taiwanese developers Digital Crafter have based much of their marketing around the inclusion of Jesus in their game.

‘He’s back and he’s cross!’ the game’s trailer says, after the Son of God breaks free of his crucifix and pummels Buddha with chunks of wood still nailed to his fists.

Also featured in the game are Norse god Odin, leader of the Greek Pantheon Zeus, and Egyptian death god Anubis.

There are also some distinctly non-godly figures in the mix, including revered Chinese general Guan Gong, and Moses, who washes away enemies with tidal waves.

Each fight also takes place in a suitably holy background, from the Garden of Eden to the parted Red Sea.

However, as players have noted on the game’s message boards, there is one striking omission from the roster.

‘Where are Mohamed and Allah?’ asked user Alnoharitan, adding: ‘Islamophobia?’ 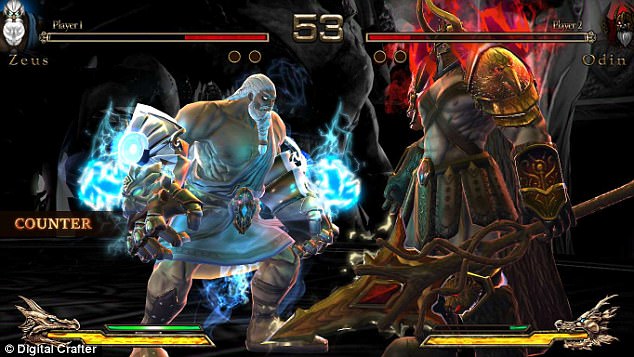 God mode: Other fighters include Zeus (left) and Odin (right) from Green and Norse mythology, respectively. Fans have noted that Allah and Mohammed are not included

‘Mohammed should definitely be in the game but IMHO I think the dev’s have some reservations in this regard, OBVIOUSLY,’ replied Abyssus Error.

‘If they do include him in the roster it’s a real possibility that one day they’ll have their door kicked in and be promptly mowed down by an AK.

‘And then we’d be left paying for an unfinished game, how’s that fair to customers?’

Another user suggested they just settle for Mohammed Ali instead.

Another user was surprised by another omission.

‘What a joke of a game I cant believe there was Jesus and Moses the fighters ahahahaha and no SATAN!!!!!’ wrote KillaKiwi666.

‘What the serious phark Gimme back my money punk dev scragbeasts.’ 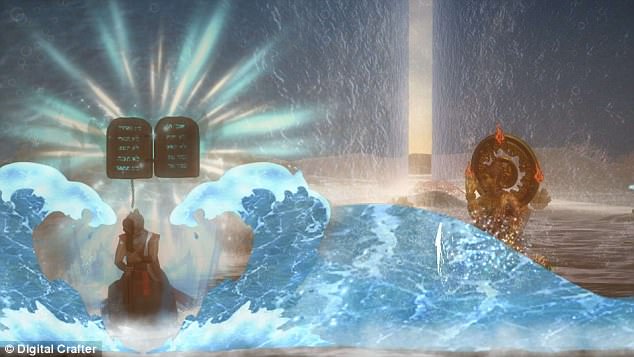 Making waves: There are also non-godly characters such as the prophet Moses (left) who creates tidal waves. It’s not clear if the game is available on tablet

Developers Digital Crafter promise free updates that will increase the roster to at least 12 gods in total, although it’s not clear whether Mohammed will be among the final challengers.

Fight of Gods is in ‘early access’ mode at the moment, with players being able to buy an unfinished version of the game for $4.79.

After September 11, at which point the price increases to $7.99. It’s not clear whether that date was chosen for further controversy.

WHICH GODS ARE FEATURED IN THE GAME?

At least two more characters are to be added to the game at a later date.

Jesus Christ is clearly the developers’ main promotional tool, and appears in the game as a slim but muscular white fighter, covered in scars and with two giant chunks of crucifix nailed to his fists.

Moses is also included in the game, presumably to represent Judaism, and can call on waves to wash his enemies away.

Gautama Buddha also appears – though curiously in the form of a golden statue, similar to those worshiped in Far Eastern countries. He strikes his enemies with a one-handed slap.

Odin, the leader of the Norse gods, is present as a burly enormous, horn-helmeted fighter – not the thin old man he was sometimes describes as in legend.

Sif, a Norse goddess associated with the Earth, is Odin’s female compatriot, and is portrayed in the game as – for reasons both baffling and utterly obvious – a leggy blonde with a lot of cleavage.

Athena, goddess of war, makes up the second contender from the Greek pantheon and carries a powerful spear.

Amaterasu represents the Japanese pantheon; she is a goddess of the sun and the universe, and fires a bow and arrow while being followed by a tiny metal sun.

Guan Gong represents China, and is the only wholly historical character in the game. He is a revered general from around AD 220.

Anubis, the Egyptian god of the dead, appears complete with his jackal head and Egyptian headdress.