Researchers used a new computer model that looks at green house emissions, to show the benefits are not just for future generations.

Populations in countries like China and India which face the most number of deaths from pollution, will see the greatest health benefits.

The dramatic efforts needed to meet the Paris Agreement targets of limiting a global temperature rise to 2°C (3.6°F) can make economic returns for the current and future generations, according to researchers.

In the latest study, authors from the Princeton University and the University of Vermont asked the question: ‘How much should the current generation invest in reducing carbon emissions for the benefit of future generations?’

Reducing carbon emissions will have long-term impacts for future generations but also improves air quality for the current global population.

The health benefits from reducing air pollution can counteract the cost of implementing policy that achieve it, the researchers say.

According to the latest report, dramatic efforts needed to meet the Paris Agreement targets of limiting a global temperature rise to 2°C (or 3.6°F) can make economic returns for the current generation.

The original climate model was developed by Yale Economist William Nordhaus, who recently received the Nobel Prize in Economics.

‘We show the climate conversation doesn’t need to be about the current generation investing in the further future.

‘By making smart investments in climate action, we can save lives now through improved air quality and health.’ 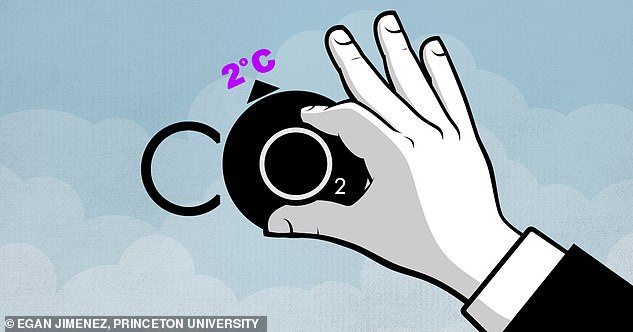 Previous economic studies did not show short term economic gains in working towards the strict climate target of limiting global temperature increase by 2°C (3.6°F) issued by the Paris Agreement.

But these studies did not take into account the human health factors that result from greenhouse emissions, the authors say.

In particular, the environmental impacts from aerosols – which result from air pollutant emissions – have never been fully factored into economic modelling.

This is because while lowering aerosol levels globally is good for human health, such gases can also cool the earth and cancel out some of the warming effect from greenhouse emissions.

The researchers included both of these opposing effects in their modelling and found that cutting these emissions still made economic sense.

Professor Marc Fleurbaey of Princeton University who also worked on the study, added: ‘Here, we show that accounting for the human health dimension alleviates many of these difficulties: Health benefits begin immediately, occur near where emissions are reduced, and accrue mainly in developing regions with less historical responsibility for climate change.’

‘The global health benefits from this climate policy could reach trillions of dollars each year, but how large these benefits will be partly depend specific air quality policies that countries adopt outside of climate change policies.

The team found the strongest immediate health benefits in China and India which are closest to such emissions and also face the highest death rates from it.

Dr Noah Scovronick, a co-lead author from Emory University said: ‘Some developing regions have been understandably reluctant to invest their limited resources in reducing emissions.

‘This and other studies demonstrate that many of these same regions are likely to gain most of the health co-benefits, which may add incentive for them to adopt stronger climate policies.’