Fights break out on the streets of Malaga

Fights have broken out on the streets of Malaga in Spain as bars reopened after the lifting of lockdown.

The violence happened outside the pubs and restaurants along the popular Paseo de Pedregalejo strip in the Costa del Sol resort.

In videos shared on social media, people can be seen throwing bins and chairs during fights, while others are pictured injured on the floor. 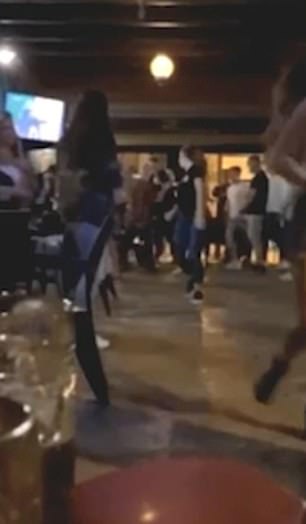 The violence happened outside the pubs and restaurants along the popular Paseo de Pedregalejo strip in the Costa del Sol resort. Pictured are the scenes of disruption outside one bar

The disruption – which happened just 48 hours into phase one of Malaga’s coronavirus exit plan – saw more than a dozen drinkers involved in one scrap, which left a man ‘wounded’ on the ground, according to Sur.

Police were called to the area just after midnight to break up the fight which began after a row between two groups drinking outside a bar.

Local media reports that the victim decided against filing a complaint and did not require hospital treatment. 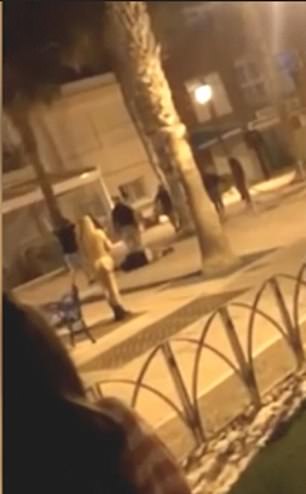 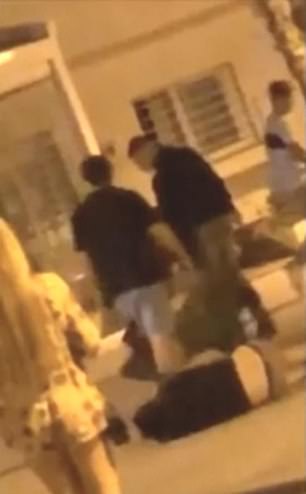 In videos shared on social media, people can be seen throwing bins and chairs during fights, while others are pictured injured on the floor

It is believed officers then attended three similar incidents in the same area that night.

Residents have said that they also saw people vomiting and urinating on the street.

Some claimed to local media that many were using alley ways off the strip as ‘toilets’ due to the restricted access in bars.

As per phase 1 of Spain’s coronavirus deescalation plan, bars, restaurants and cafes are allowed to reopen their terraces at 50 per cent capacity.

Initial planning had suggested they would be opened at 30 per cent capacity but this was amended by Prime Minister Pedro Sanchez. 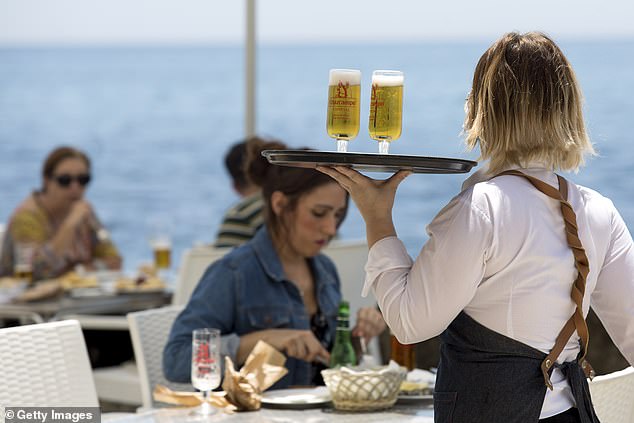 As per phase 1 of Spain’s coronavirus deescalation plan, bars, restaurants and cafes are allowed to reopen their terraces at 50 per cent capacity. Pictured: a bar in Malaga yesterday

People are now allowed out to exercise and some shops can open.

But fears of a second wave remain and the government introduced mandatory mask use in public from Thursday.

Locations that were harder hit by coronavirus, such as Madrid and Barcelona, remain in a stricter quarantine. 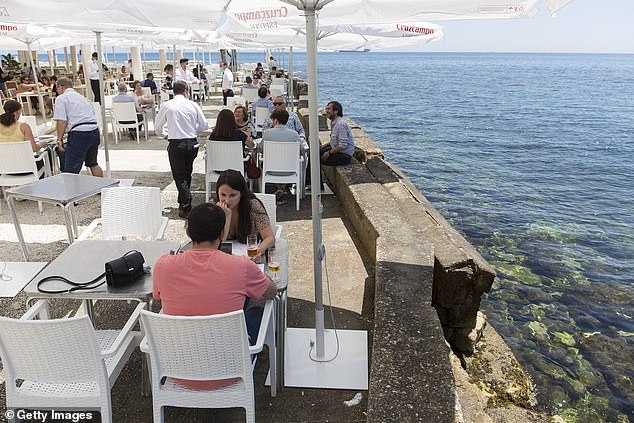 Spain’s daily death toll from the coronavirus fell below 50 on Thursday for the first time since a lockdown was imposed in mid-March, but the figure excludes deaths in the northeastern region of Catalonia.

Catalan authorities did not update their daily figures due to data-validation problems, the ministry said in a statement, without elaborating on the nature of the problems.

Health Emergency Chief Fernando Simon said officials preferred not to release the Catalan data until they were satisfied with its quality.

‘We want to provide the best possible data so people can take solid and informed decisions,’ he told a news conference.

Including deaths in Catalonia the daily toll would still be around 50, he added.

At the peak of the outbreak in early April, Spain reported as many as 950 deaths a day. A strict lockdown has helped bring the epidemic under control, prompting authorities to begin lifting restrictions.

Support for his left-wing coalition is flagging in parliament and on the streets, with pot-banging protests spreading around the country.