The auction of a huge collection of movie and TV memorabilia seized from a criminal who turned a nuclear bunker into a drugs factory has generated interest around the world.

Would-be buyers jetted into Belfast from across Europe for the sale of Wiltshire man Martin Fillery’s remarkable haul of rare collectables on Thursday, while other bidders from the US and further afield registered online.

The treasure trove of memorabilia was built up over two decades, costing Fillery in excess of an estimated £1 million.

One of the items that generated most interest ahead of the hammer going down at Wilsons Auctions in Mallusk was a car actually used in Back to the Future II.

A car used in the film Back To The Future II

The collection also included life-size Terminator and Iron Man statues, a Star Wars Stormtrooper, an Ewok, a Doctor Who Cyberman, ET, a Gremlin and a waxwork of Gene Wilder as Willy Wonka.

There was a replica Batboat from the 1960s incarnation of the Batman show and film, and a more futuristic Batbike inspired by the modern-day films.

A Starsky and Hutch style red and white Ford Torino, an Only Fools And Horses three-wheeled van, Postman Pat’s van and even Roland Rat’s pink car were also on the bidding list.

Fillery was one of three men jailed for turning an underground nuclear bunker designed for army VIPs into what was one of the largest cannabis factories ever found in the south of England.

The 46-year-old movie fan, from Pedwell Hill, Ashcott, Bridgwater, Somerset, was jailed for eight years at Salisbury Crown Court in August for conspiracy to produce class B drugs, abstracting electricity and money laundering.

The court heard that the drug-growing operation at the disused RGHQ (Regional General Headquarters) Chilmark, Wiltshire, was capable of producing £2 million worth of cannabis each year. 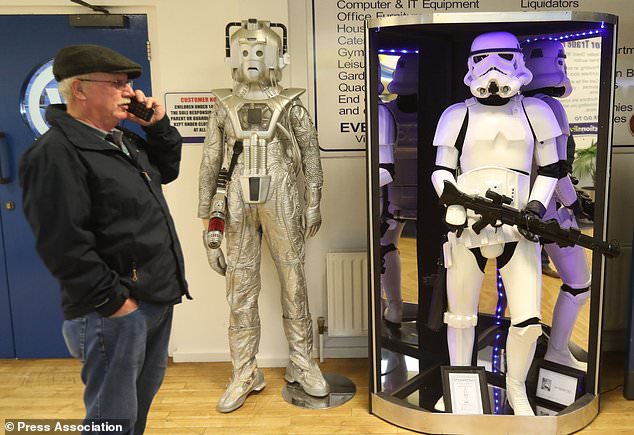 “The interest has been truly global,” he said.

Mr Larkin added: “We are regularly instructed to sell proceeds of crime assets. That’s usually Rolexes, fast cars, houses in Spain but every now and again it’s memorabilia. But this is certainly one we will remember for quite some time.

“We have an important job to do in that we have to realise as much as we can and get the money paid back over to the court. Everything we raise goes back into the public purse. So there’s a bit of fun but there is also a serious job to be done.”