It was a celebration eight years in the making, but American soccer fans finally toasted a round-of-16 berth at the World Cup, thanks to Tuesday’s 1-0 win over Iran in the Group B finale.

Following Christian Pulisic’s go-ahead goal in the 38th minute, Team USA supporters from New York to Los Angeles burst out into applause, albeit only momentarily. That excitement turned into a few nervous moments as Pulisic remained on the turf with an apparent injury following the score. He would briefly return, but was subbed out at halftime.

The US needed the win over Iran in the Group B finale to advance to the knockout stage for the first time since 2014, but that victory was anything but a sure thing against a surging Iranian team coming off a 2-0 win over Wales. Tuesday’s second half included more than a few nervous moments as Iran generated a series of scoring chances. The Americans now advance to face the Netherlands on Saturday at 10am EST.

For many, enjoying a daytime World Cup game in a bar marks a new experience for the growing number of American soccer fans. The team didn’t qualify for the 2018 World Cup in Russia – considered one of the greatest disappointments in USMNT history – and the 2014 World Cup in Brazil was played at convenient times for American audiences, given the shared time zones.

Since then, soccer has moved ahead of hockey to become the fourth most-watched sport among Americans, who have grown accustomed to watching European matches on weekend mornings. And increasingly, those matches are played by Americans, like Chelsea’s Pulisic, or Leeds United’s Tyler Adams.

Unlike last week’s match against England, Tuesday’s game was not seen on the jumbotrons lining New York’s Times Square, but soccer fans still found ways to watch, nonetheless. Some packed into bars and restaurants, while others took in the action at work on their computers and cell phones. 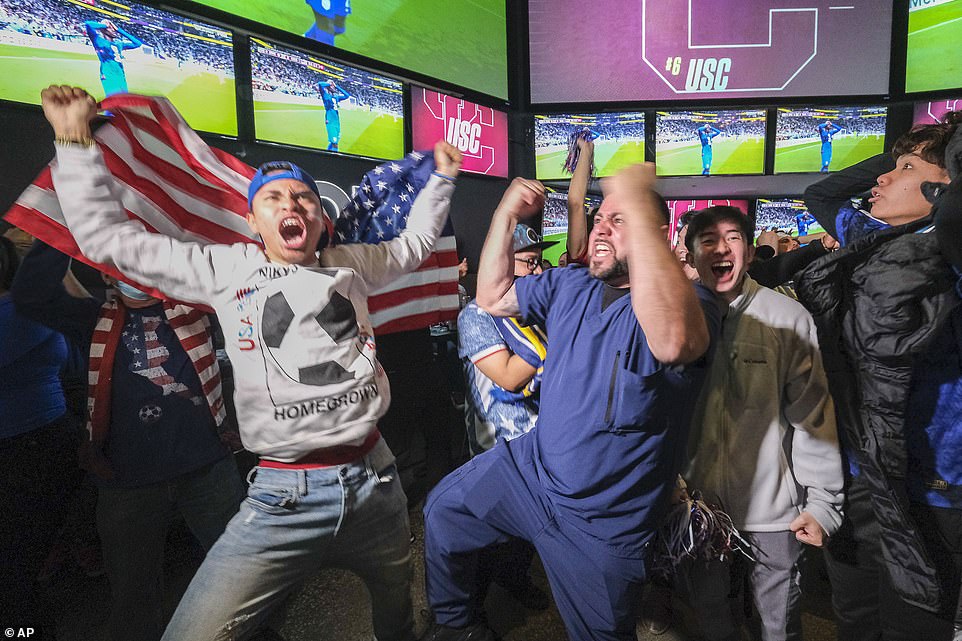 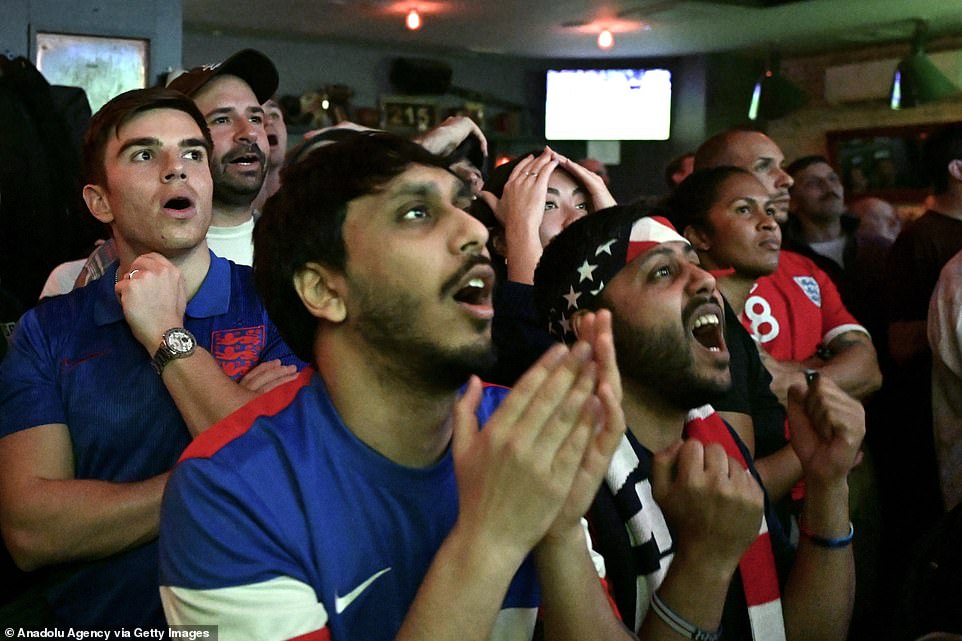 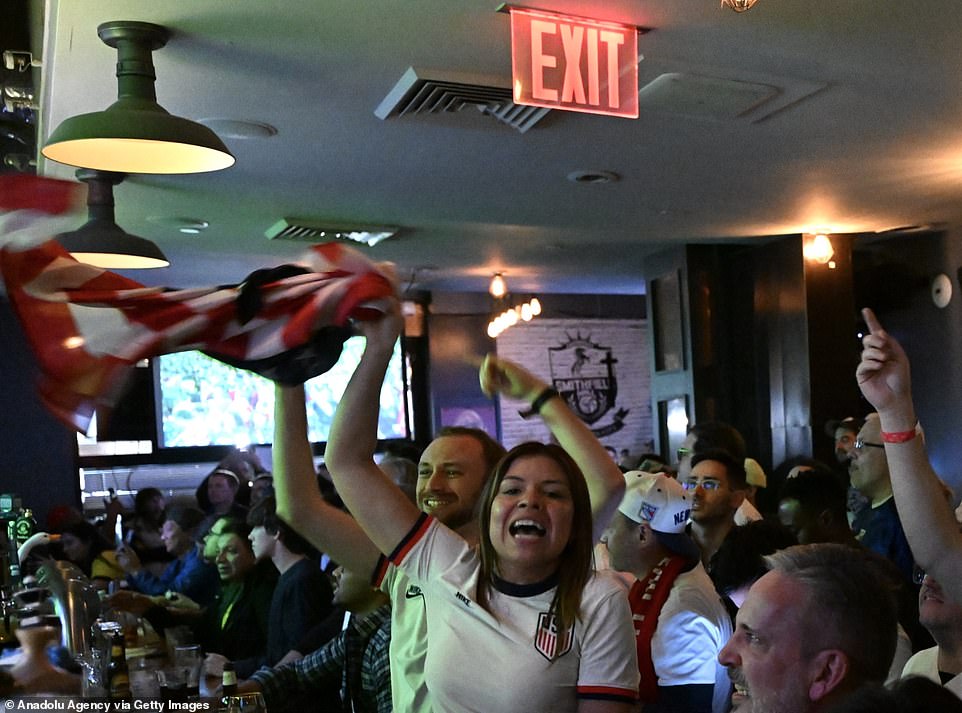 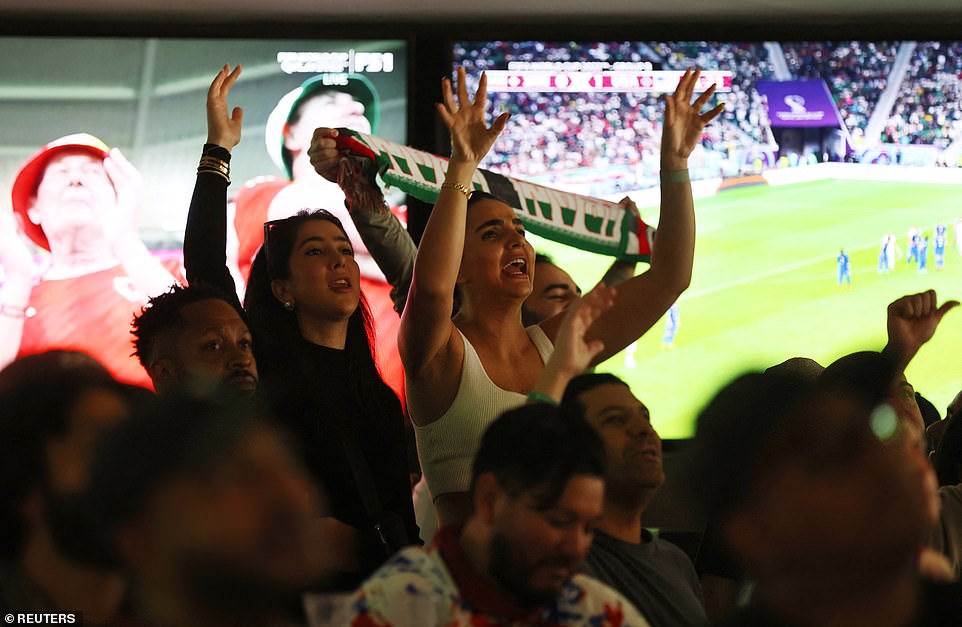 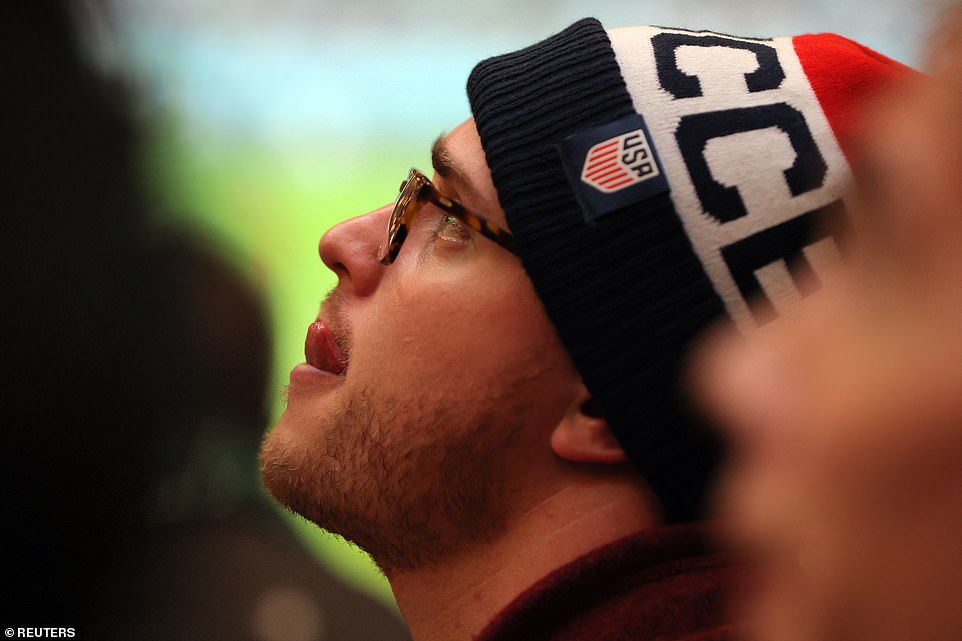 A United States fan watches the match on a screen in Bierhaus NYC, one of many bars catering to World Cup fans

Meanwhile, on the other side of the planet, smiling US and Iranian fans mingled and posed for photos outside a stadium in Doha ahead Tuesday’s match.

The atmosphere was generally festive though the political divisions among Iran fans were apparent outside Al Thumama Stadium, as they have been during previous Iran games during the tournament, with pro-government fans confronting those expressing support for the antigovernmental protests across Iran.

Two London-based Iranians, wearing T-shirts with the slogan of protests, were repeatedly harassed while talking to an Associated Press journalist on Tuesday. One of them, who identified herself as Maryam, received a grazing slap to the face by an Iranian man following her. Security guards got between them, but did not detain the man who slapped her.

Other men blew vuvuzelas at the two or filmed them. One man shouted at them in Farsi ‘why don’t you think Iran is good?’

Dalia, an 18-year-old Iranian from the southern city of Ahvaz who attended the game with her parents, said Tuesday’s match had exposed divisions within her family between those still committed to supporting Iran’s national team and others who reject the players as tools of the government.

The Iranian players in Qatar have declined to comment or made vague statements about the protests in Iran, which were sparked by the death of a 22-year-old woman while in the custody of Iran’s morality police.

‘It’s so sad for me because I want to support them so badly but I just can’t,’ Dalia said. 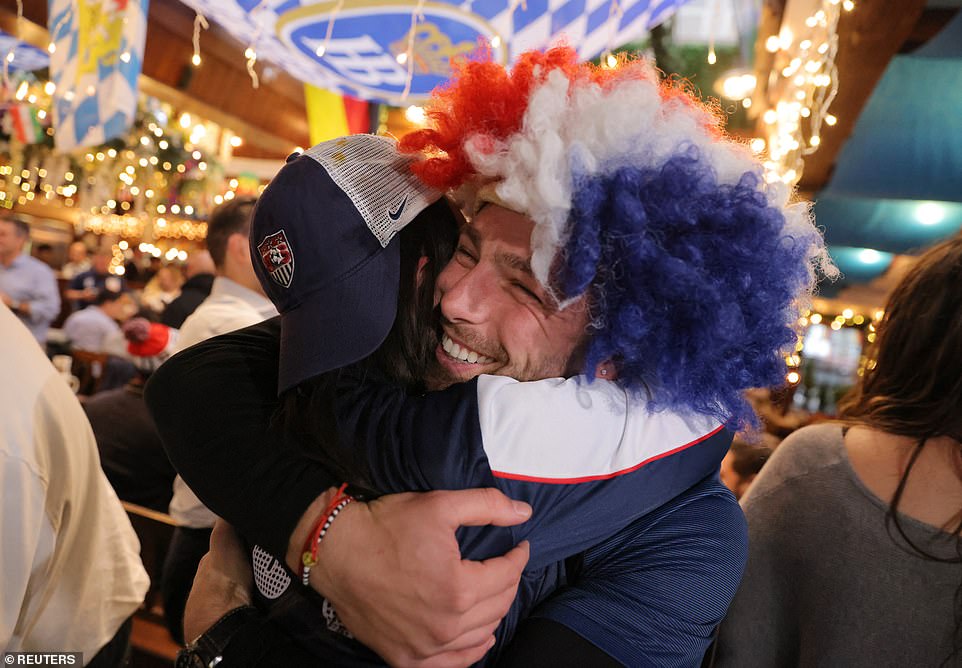 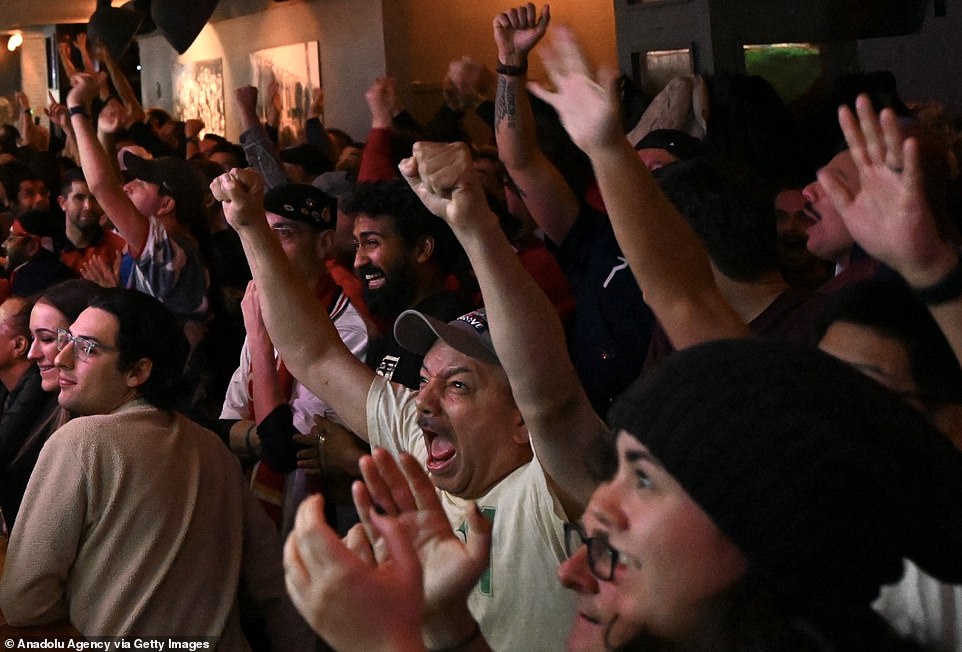 World Cup fans gather at the Smithfield Hall watch the U.S. match against Iran on Friday in New York 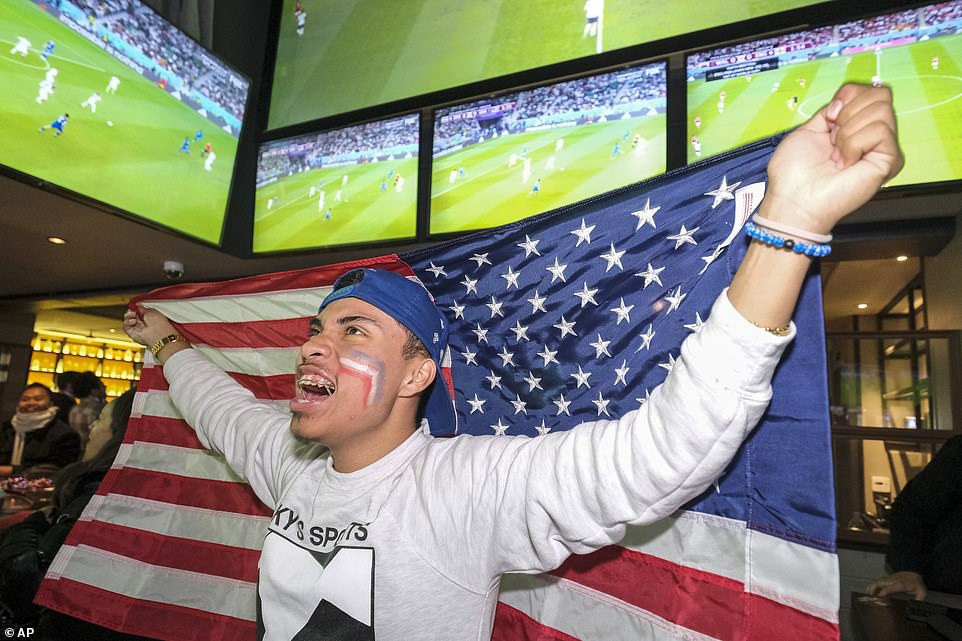 The Iranian players sang along to their national anthem before kickoff, which they also did against Wales. The players remained silent when the anthem played during Iran’s World Cup opener against England in what some interpreted as a show of support for the protest movement.

Mehrdad and Eli from Arizona brought pictures of the young women killed in Iran’s protests to the match. But holding them up invited harassment, they said, so Eli kept them in her purse. They described a deep sense of unease at the stadium.

‘I feel like I am surrounded by IRGC agents,’ said Mehrdad, referring to the country’s powerful Revolutionary Guard. ‘Everybody’s watching you.’

Elsewhere, US and Iranian fans appeared unfazed by the tensions between the two countries, posing together for photos.

‘It has been amazing to see Americans. They are so friendly,’ said Yas, a 14-year-old Iran fan from the city of Shiraz. ‘I hope this is a chance for people to connect and share their cultures peacefully.’

Her older sister had an X written with a black marker over her lips.

‘She’s doing that to show we all can’t talk about the politics in our country,’ Yas said. 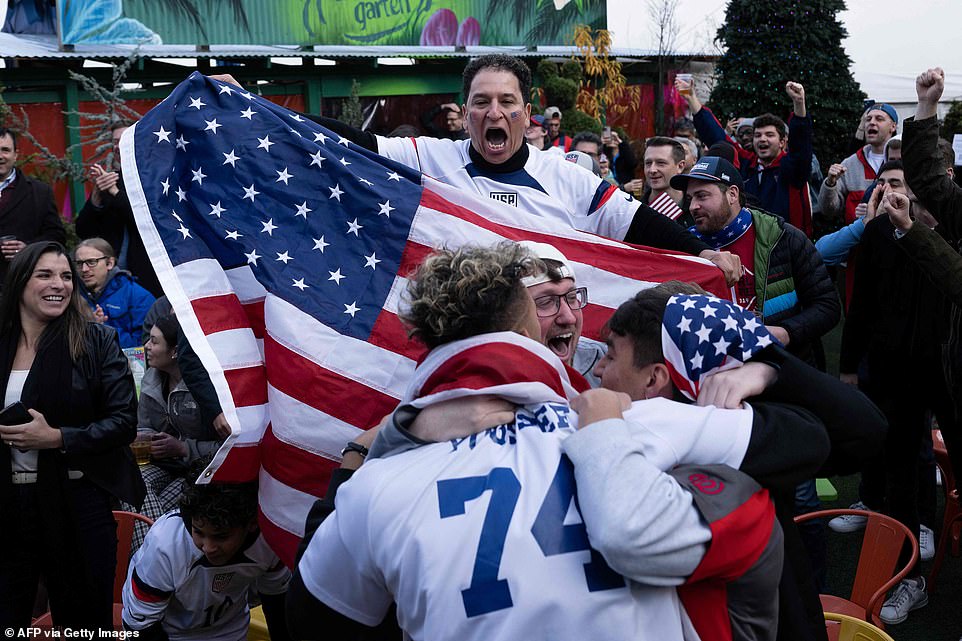 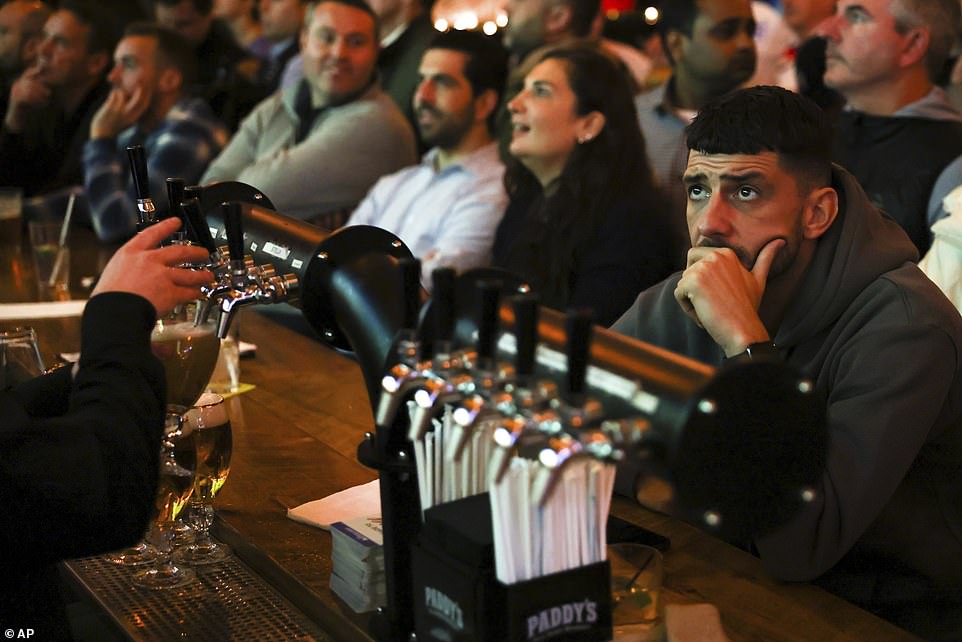 The latest protests mark one of the biggest challenges to Iran’s ruling clerics since the 1979 Islamic Revolution that brought them to power. Rights groups say security forces have unleashed live ammunition and bird shot on the protesters, as well as beating and arresting them, with much of the violence captured on video.

At least 452 protesters have been killed and more than 18,000 detained since the start of the unrest, according to Human Rights Activists in Iran, a group that has been monitoring the protests.

Iranian authorities announced just before the match that two former Iran players who were arrested this month in connection with the protests have been released.

Parviz Boroumand, a retired goalkeeper, was arrested nearly two weeks ago on charges of participating in protests in the capital, Tehran, and was accused of damaging property. Voria Ghafouri was arrested last week for ‘insulting the national soccer team and propagandizing against the government,’ according to state-linked media.

Gianni Infantino, the head of world soccer body FIFA, said in a statement he was ‘delighted’ that Ghafouri was released.

‘In taking this decision, I appreciate the support of the Iranian authorities, and in particular that of Hamid Sajjadi, the Iranian Minister of Sport and Youths, who I met around Iran’s match versus Wales,’ Infantino said. ‘FIFA maintains that dialogue and engagement should remain as the prime channel to resolving problems of any kind.’ 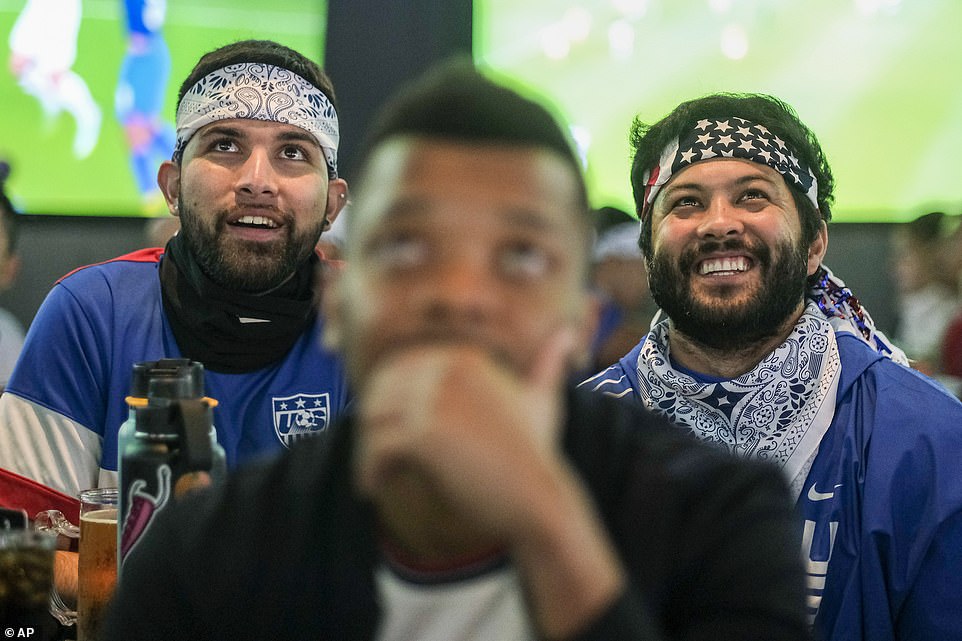 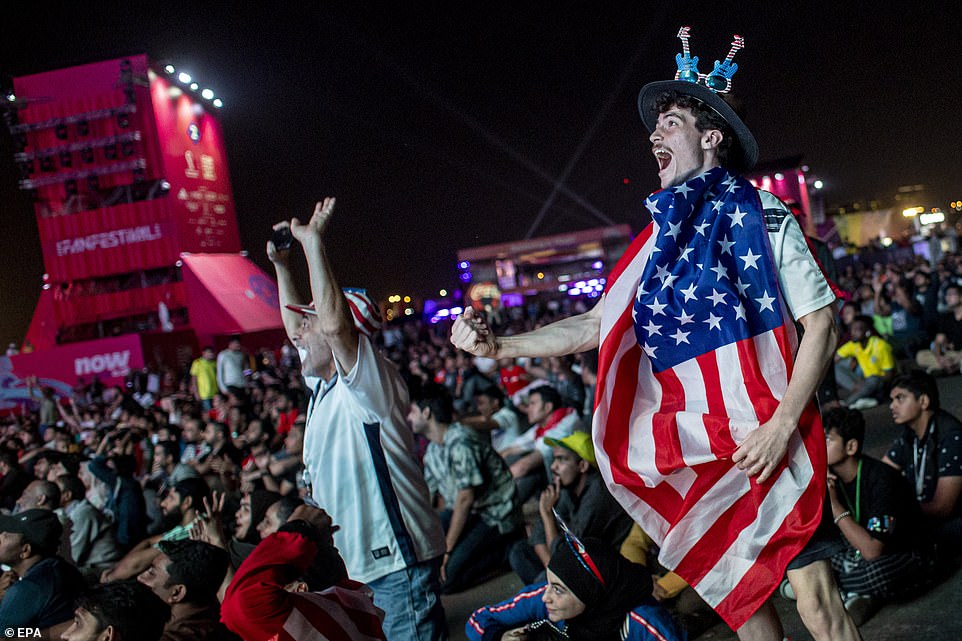 Fans of US react during watching the FIFA World Cup 2022 group B match between USA and Iran at Fan Festival, in Doha

Pulisic scored while crashing headfirst into the goalkeeper in the 38th minute and the United States advanced to the knockout round of the World Cup with a 1-0 win over Iran on Tuesday in a politically charged rematch of their famous meeting a quarter-century ago.

Pulisic sprawled on the field and was lying in the goal for about three minutes as he received treatment from the US staff. He reentered the game but was replaced at the start of the second half.

Back in the World Cup after missing the 2018 tournament, the US opened with draws against Wales and England and needed a victory to move on to the round of 16.

The Americans finished second in Group B with five points, two behind England, and will play the Netherlands on Saturday with the chance to reach the quarterfinals for the first time since 2002.

‘I always say it’s us against the world,’ forward Tim Weah said. ‘No one believed the US could play good football.’

Iran finished third with three points. The team has failed to advance in all six of its World Cup appearances. 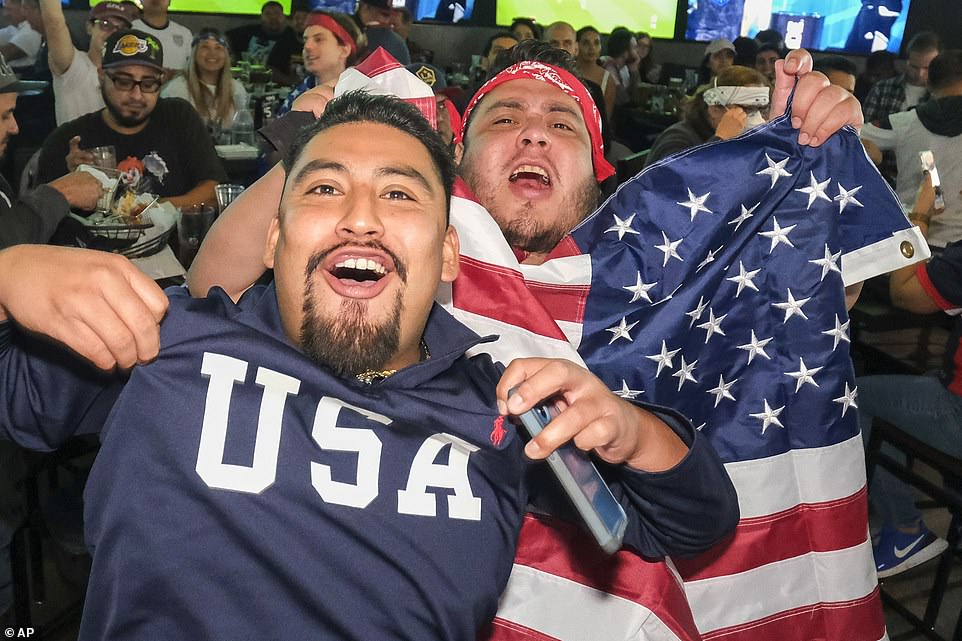 There was heightened tension surrounding the match because of the strained relations between the United States and Iran’s Islamic government. Iran had famously upset the US 2-1 in the 1998 tournament in France, eliminating the Americans.

Pregame protocols were normal, unlike the 1998 game, when Iranians presented the Americans with white flowers and the teams posed for a joint photo.

Raucous Iranian fans with horns and drums in the crowd of 42,127 filled the lower bowl behind one goal at Al Thumama Stadium and were far louder than the red-white-and-blue US supporters at the other end and behind the American bench.

The US outshot Iran 9-0 in the first half but didn’t break through until Pulisic came up with the big moment that a growing and increasingly demanding fan base back home had been pining for.

Weston McKennie lofted a pass from just past the center circle to Sergiño Dest at the edge of the 6-yard box. Dest headed the ball in front of the net on a bounce as Pulisic charged up the center of the field past Ramin Rezaeian and Majid Hosseiniand.

Turning his body to let the ball hit his right foot, Pulisic knocked the ball for his 22nd international goal and first in World Cup play. His momemtum carried him into goalkeeper Alireza Beiranvand, and Pulisic needed to be helped to his feet before going back in.

‘Obviously we’re very thankful that he threw his body there,’ McKennie said. ‘At the end it was a heart-drop sinking moment, but we got it done and we’re excited to still be here.’

Weah, who scored the Americans’ goal in the opening 1-1 draw with Wales, nearly doubled the lead in the seventh minute of first-half stoppage time but was ruled offside.

Brenden Aaronson replaced Pulisic at the start of the second half.

With England ahead of Wales, Iran knew if needed only a draw to advance and finally got its first shot at goalkeeper Matt Turner when Saman Ghoddos put a header over the crossbar in the 52nd minute. Saeid Ezatolahi put an open shot high and wide in the 70th and Morteza Pouraliganji’s diving header in the third minute of nine minutes of stoppage time went just wide and Walker Zimmerman cleared a loose ball in front of the open net in the ninth minute after Cameron Carter-Vickers got a slight hand on Mehdi Taremi.

‘I hope that our fans and our people in Iran forgive us. I am just sorry,’ Taremi said. 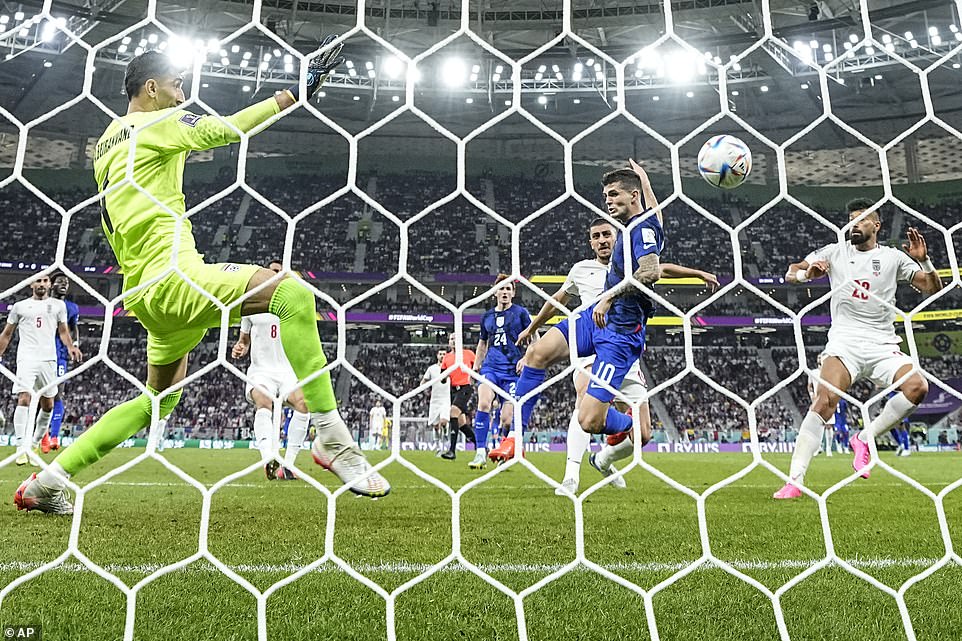 Pulisic scored while crashing headfirst into the goalkeeper in the 38th minute and the United States advanced to the knockout round of the World Cup with a 1-0 win over Iran on Tuesday in a politically charged rematch of their famous meeting a quarter-century ago. Pulisic sprawled on the field and was lying in the goal for about three minutes as he received treatment from the US staff. He reentered the game but was replaced at the start of the second half