Find out if your local Pizza Express restaurant is closing

Is your Pizza Express closing? Chain reveals the 73 restaurant sites it is closing as 1,100 staff look set to lose their jobs

Ailing Pizza Express has confirmed it plans to permanently shut 73 of its restaurants, putting 1,100 jobs at risk.

The closures span Aberdeen to Torquay, including its original site in Wardour Street in Soho, London, which opened in 1965.

Other sites across major cities including Birmingham, Bristol and Edinburgh are also set to stay closed for good.

The company has said it will try to look for redeployment opportunities for staff affected by the closures.

It is the latest in a raft of casual dining chains, including Zizzi-owner Azzurri Group, Byron Burger, and Frankie & Benny’s owner The Restaurant Group, to shut sites after being hit by lockdown.

Pizza Express has 355 restaurants open across Britain, and over 30 more restaurants and music venues are scheduled to reopen in the coming weeks.

The chain said 89 per cent of its creditors voted for its Company Voluntary Arrangement restructuring deal, which will also see it secure rent reductions.

It needed a minimum of 75 per cent of creditors to vote in favour of the deal to give it the green light.

In a statement, Pizza Express said today: ‘The successful vote unlocks the company’s ability to actively address the challenges brought by Covid-19, securing over 9,000 jobs in the UK.

‘The directors of Pizza Express thank its creditors for their support during this period and look forward to ongoing partnership as the hospitality industry recovers to growth.’

Last month, Pizza Express said the slump in revenue caused by the enforced closure of all restaurants during the pandemic, the cost of reopening, and Britain’s uncertain economic future meant its rental costs were no longer sustainable.

The restructuring will also see a significant de-leveraging on the group’s external debt, reducing it from £735million to £319million.

Around £144million of new funds will be pumped into the business to drive future growth. 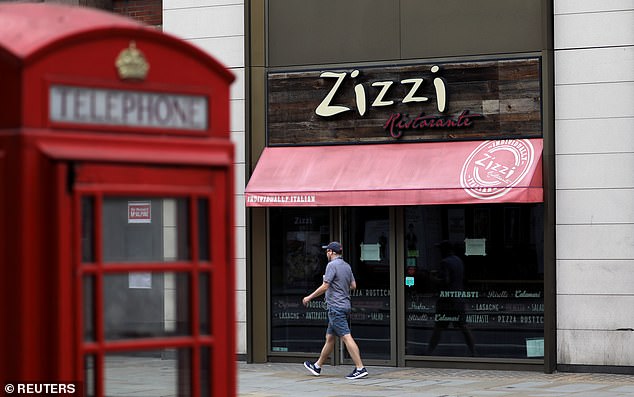 Troubled times: The owner of Ask Italian and Zizzi restaurants plans to close 75 of its restaurants, putting 1,200 jobs at risk

The company, which is majority-owned by Chinese firm Hony Capital, also confirmed last month that it had hired advisers from Lazard to lead a sale process for the business.

Chancellor Rishi Sunak’s Eat Out to Help Out Scheme gave the hospitality sector a boost last month, but many casual dining chains look set to struggle as winter rolls in. Many chains in the sector faced dwindling profits and sky-high costs well before lockdown.

The owner of Ask Italian and Zizzi restaurants plans to close 75 of its restaurants, putting 1,200 jobs at risk.

Meanwhile, Casual Dining Group, the owner of Bella Italia, Café Rouge, and Las Iguanas, closed 91 restaurants when it collapsed into the hands of administrators in July.

Back in June, The Restaurant Group, which owns