For a short break in a winter wonderland, look no further than Finland. From November 23, it will allow UK tourists to visit for three days without enduring quarantine if, before arriving, they’d taken a Covid-19 test with a negative result.

Finland remains one of the few countries in Europe that holidaymakers from the UK can visit without having to quarantine on their return. So when restrictions are lifted again, what better place to go aurora hunting, stay in an igloo, visit Santa or just enjoy a cool city break.

Helsinki, which is as cool as Copenhagen and with a seafront to rival Stockholm, makes a refreshing city break, where a population of under 1.5 million means you can wander around easily without the bustle of crowds.

Dashing through the snow: Hitching an exhilarating ride on a husky sled in the remote Arctic wilderness

There’s a wonderful mix of art and architecture here, along with Finnish saunas. As well as Art Nouveau, Art Deco and modern buildings (check out the Central Library), discover underground treasures such as the Amos Rex art museum and the Temppeliaukio Church, quarried out of bedrock.

Kick back at the Allas Sea Pool, with its saunas and open-air pools, then stock up on traditional treats from elk and reindeer to rye-bread salmon sandwiches at the Old Market Hall.

For a chic but cheap hotel, look no further than the central and stylish Art Deco-designed Lilla Roberts. B&B doubles cost from €128 a night (£115) (lillaroberts.com). If you prefer to book a package, Kirker Holidays has three nights’ B&B at the Hotel Kamp near the harbour, with BA flights and transfers from £728pp (kirkerholidays.com). 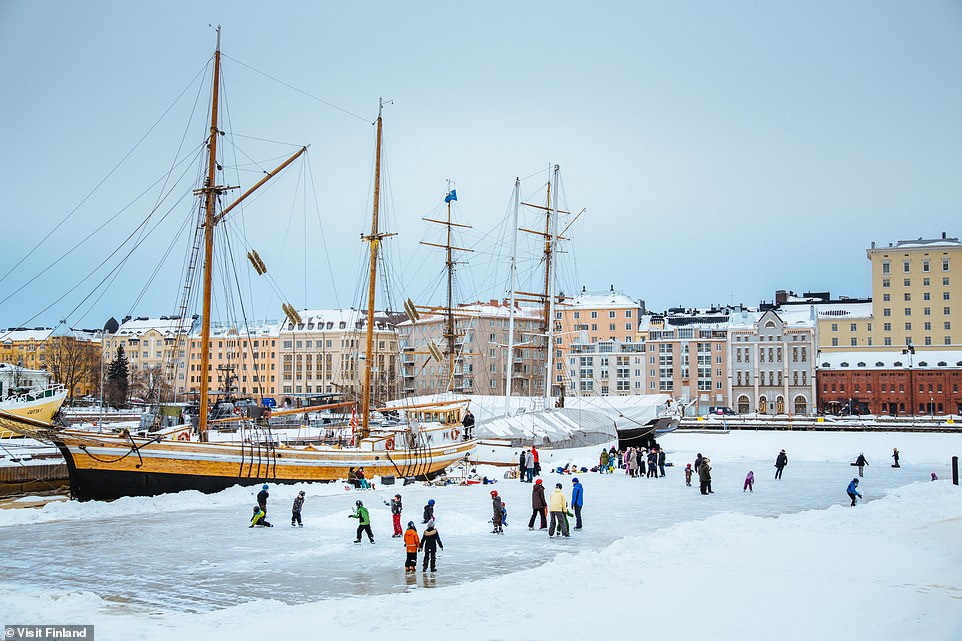 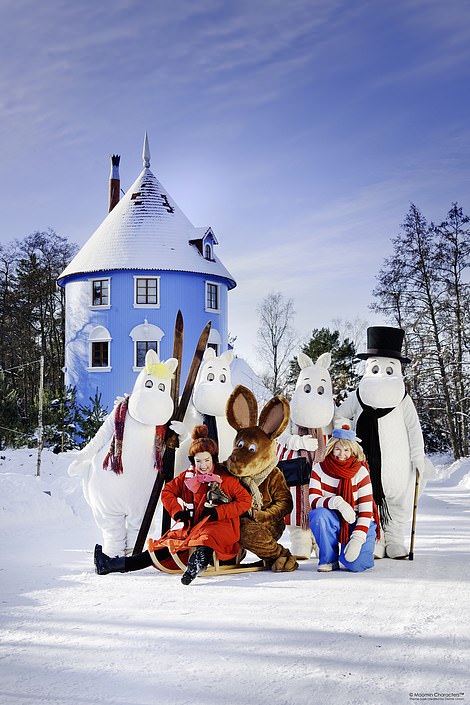 Characters from the Moomin World theme park pose with visitors

Two hours by train from Helsinki is the little-known city of Turku – Finland’s capital before it lost the title in 1812. Its 13th Century sights, a medieval castle and cathedral, are on opposite sides of the River Aura, the main artery of the city and along which you’ll find plenty of boat bars and riverside restaurants to choose from. Try Smor or Mami.

The Moomin World theme park, based on the children’s books by Tove Jansson, is a 20-minute bus ride away on the island of Kailo.

There are river views from some of the rooms at the Radisson Blu Marina Palace Hotel, which is within walking distance of Market Square and the Waino Aaltonen Museum of Art. Doubles cost from €95 a night, room only (radissonhotels.com).

Even closer to Helsinki than Turku is the pretty town of Porvoo – it’s less than an hour away by bus (with fares about €10 each way). Here, among ancient cobbled streets, colourful houses and a medieval cathedral, is a burgeoning art scene with plenty of galleries to explore.

What makes Porvoo the perfect winter escape, though, is that it has all the joys of a city break, with some serious outdoor activities. There’s both cross-country and downhill skiing at Kokonniemi ski centre and there are several outdoor skating rinks (there is ski hire, but you will need your own skates).

Stay at Pariisin Ville, just five minutes from the bus station. Three of its ten rooms have saunas and B&B doubles cost from €135 a night (pariisinville.fi).

But to experience something truly special, it’s hard to beat glamping on a frozen lake in the middle of the Arctic wilderness. Add in to that mix a bed which offers a panoramic view of the night sky, putting you in the perfect spot should the Northern Lights, or Aurora Borealis, decide to put on a show.

This is Lake Inari, the largest lake in northern Finland, which stretches for 50 miles and lies close to the Russian border.

The glass-walled luxury Aurora Hut (with wi-fi) sleeps two and is part of the adults-only Wilderness Hotel Nangu on the lake shore, where guests can try their hand at everything from ice fishing to snowmobiling. Three nights’ full-board, one of which is in the Aurora Hut, with flights and loan of winter clothing, is from £1,408pp, but activities cost extra.

Three nights without staying in the Aurora Hut, but including activities, costs from £1,596pp (discover-the-world.com).

While the Snow Train in Rovaniemi is not an actual train – it’s a carriage drawn by skimobile – it allows you to zip around for a better chance to catch sight of the Northern Lights. If that doesn’t work, during your stay at the Apukka Resort you’ll be staying in an Aurora Cabin Glass Igloo with a panoramic glass roof, allowing you to see any impromptu night-sky shows while snuggled in bed.

A husky-dog sled tour is included in the cost, with optional extras from ice fishing to an Arctic sauna. Three nights’ half-board costs from £1,260 with flights (sunvil.co.uk).

For relaxation, meditation and mental and physical cleansing, Finns head to the sauna. And Sauna World, on the shores of Lake Jeris, has five to enjoy. One has lake views and another, a private Northern Lights sauna, has an upper level where you can lie back and watch the night sky. When you’ve warmed up, try a dip in the 50ft ice hole, then repeat.

Family-run Harriniva Hotels & Safaris offers the woodland sauna and rustic hotel at Jeris, and can also organise other activities. B&B doubles cost from €115 a night. Or a three-night stay, half-board, including sauna entry and snowmobile and husky safari, costs from €695pp (harriniva.fi). Fly to Kittila with Finnair via Helsinki from £197 (finnair.com).

Going to Lapland may be a family trip of a lifetime, but it’s an expensive business, so it’s good news that Tui has three-night breaks to Rovaniemi – the official home town of Santa Claus – from just £675pp. 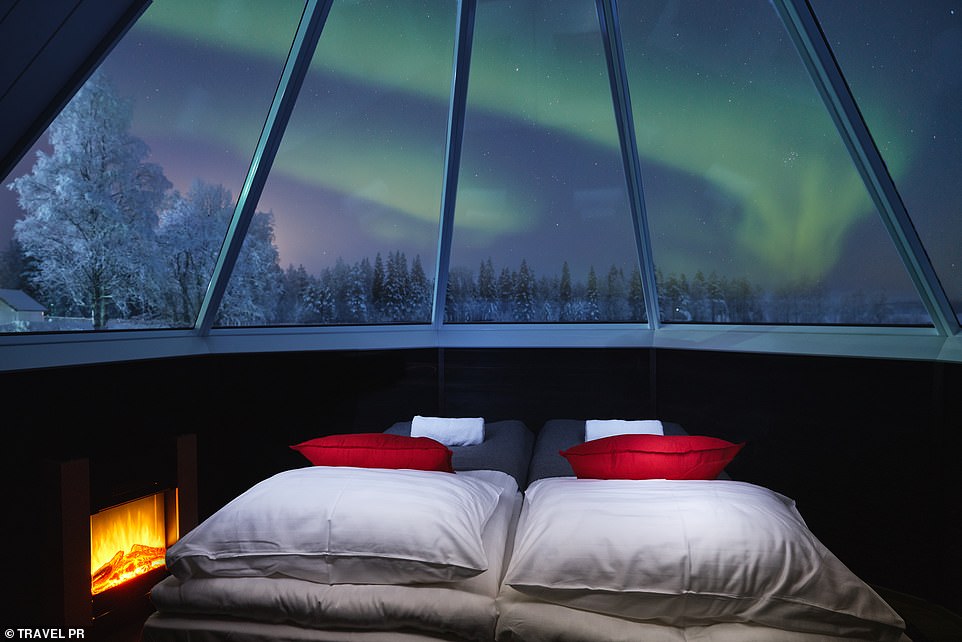 Inside the Apukka Resort’s glass igloo, which allows you to see any impromptu night-sky shows while snuggled in bed

Its family-friendly hotels have plenty of entertainment and activities for children on offer, including tobogganing, snow golf and marshmallow-toasting, along with pantomimes and festive-themed parties. A visit with Santa is scheduled, too.

The price is based on a family of four, with flights, for three nights’ half-board (tui.co.uk).

Another option in Rovaniemi is a three-day Express Lapland trip, which offers plenty of reindeer and Christmas magic.

It includes a snowmobile ride to a reindeer farm, a sleigh ride, an Arctic Circle crossing ceremony, and a visit to Santa’s Post Office and an audience with the big man himself.

As darkness falls, there is the chance to try floating in a hole in a frozen lake, wearing a warm suit. Then return to your cosy log cabin with a private sauna.

But for a more grown-up experience, make your way to an Arctic hilltop in Rovaniemi and the boutique hotel Iso-Syote, which is perfectly positioned for a short ski break. 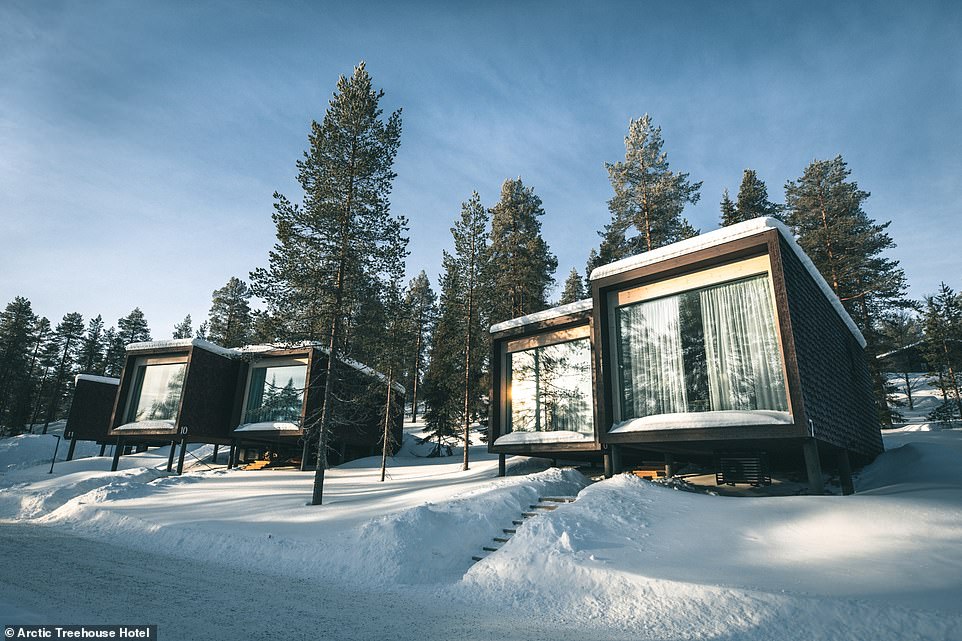 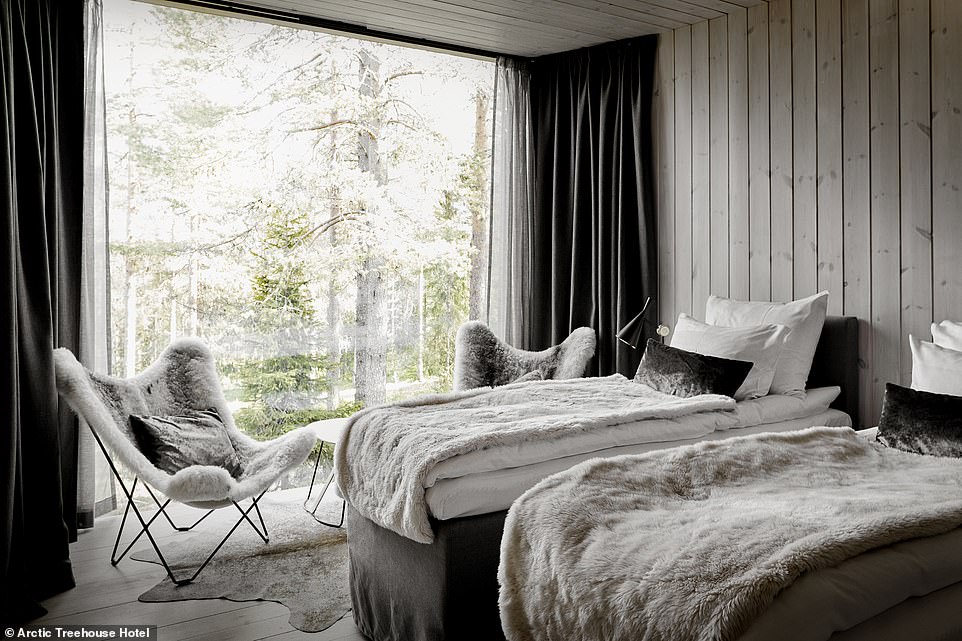 After a meal in the excellent restaurant at Arctic Treehouse Hotel featuring local specialities, including reindeer, you can return to a cosy cabin, snuggle down and hope for a showing of the Northern Lights 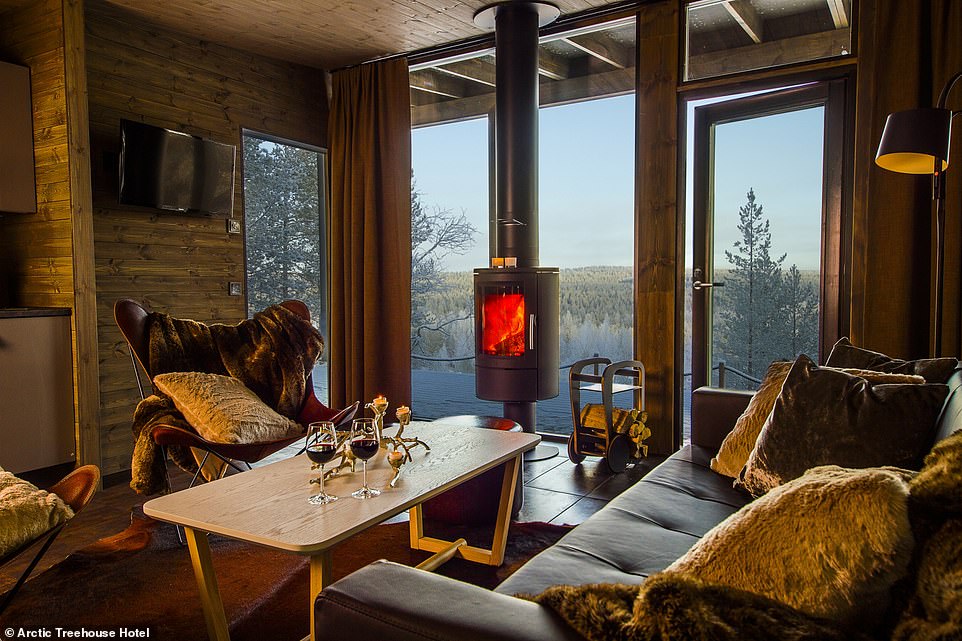 The lounge area at Arctic Treehouse Hotel, where three nights’ half-board is from £1,365pp

The ski centre is by the hotel slopes, and there’s a cross-country ski track from the hotel courtyard. Other activities are possible, and you can even stay in an igloo. Otherwise, the hotel has swish Aurora View Suites with the bed facing the large windows and a hot tub on the balcony.

B&B in an Aurora View Suite costs from €234 per night. The igloo stay costs an additional €80 a night (hotelli-isosyote.fi).

If you fancy some serious Scandi-chic, look no further than the Grand Design of Lapland lodges, the Arctic Treehouse Hotel, also in Rovaniemi.

Its sleek elevated cabins, with pale wood and furnishings, have walls of glass that look on to a magical forest of snow-laden trees. Spend your days out in the winter wonderland snowmobiling, husky mushing and on reindeer sleigh rides.

Then, after a meal in the excellent restaurant featuring local specialities, including reindeer, you can return to the cosy cabin, snuggle down and hope for a showing of the Northern Lights.

Three nights’ half-board is from £1,365pp, with flights to Rovaniemi and transfers. Activities cost extra (sunvil.co.uk).

You may not associate Finland with super-luxe, but it has it in spades at Octola, which has been described as ‘the most exclusive lodge in Lapland’. 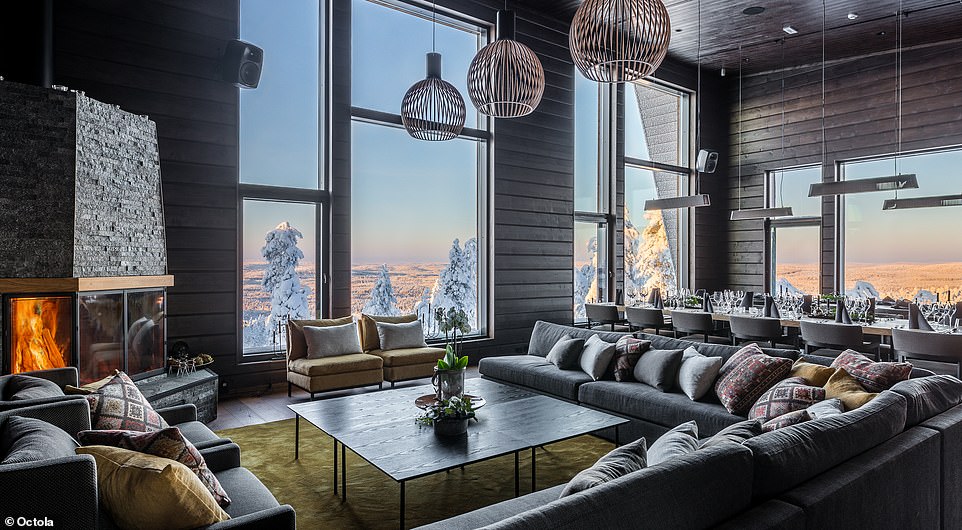 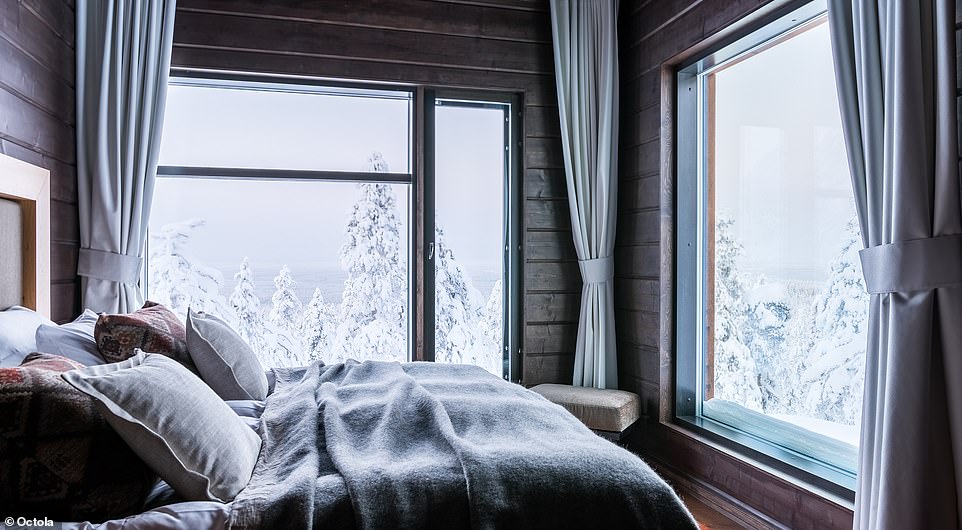 Octola has been described as ‘the most exclusive lodge in Lapland’. Pictured is one of the luxurious bedrooms 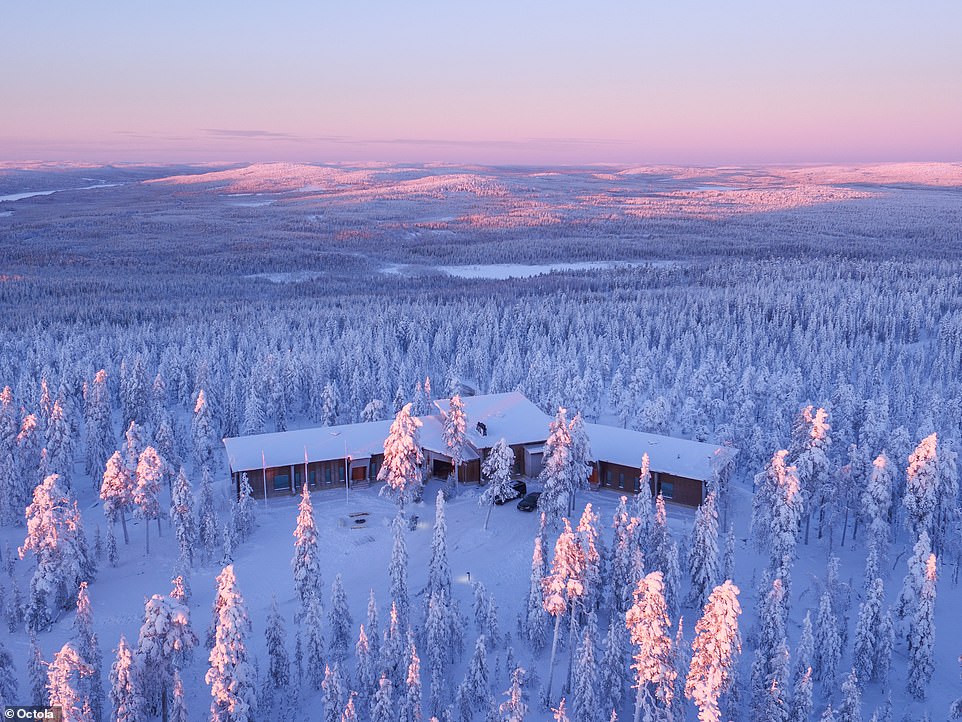 There is a luxury ski chalet feel to Octola, which has two wings, one with four bedrooms and another with six, designed to reflect traditional Lapp nomadic dwellings 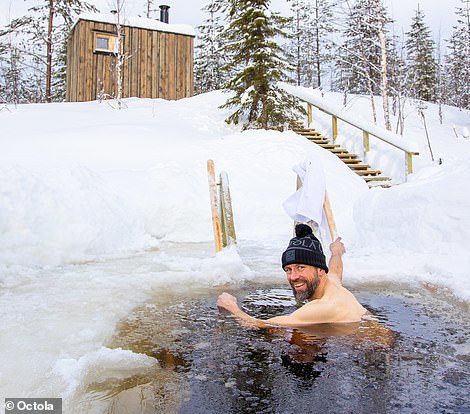 Octola’s natural ice bath, which is filled with water that comes from a natural spring. Submersion in ice-cold water helps to relieve tired muscles after exercise, relieve pain and insomnia, and stimulate circulation, says Octola’s founder and CEO Janne Honkanen

Guests can really make an entrance by arriving on a snowmobile or helicopter before checking in to their ten-bedroom lodge on this private reserve.

Once there, everything is taken care of, with delicious meals included in the price, a wilderness guide to plan your days and a butler on hand to prepare the hot tub or sauna.

There is a luxury ski chalet feel to the place, which has two wings, one with four bedrooms and another with six, designed to reflect traditional Lapp nomadic dwellings. Here, complimentary activities run the gamut of winter fun, including snowshoe excursions in search of the Northern Lights, cross-country skiing, tobogganing and snowmobiling.

Extra charges are made for husky sledding and Santa visits – it’s worth noting that you’ll need deep pockets to stay here. Three nights’ full-board with flights to Rovaniemi and road transfers costs from £6,900pp, based on six people sharing the four-bedroom wing (scottdunn.com).